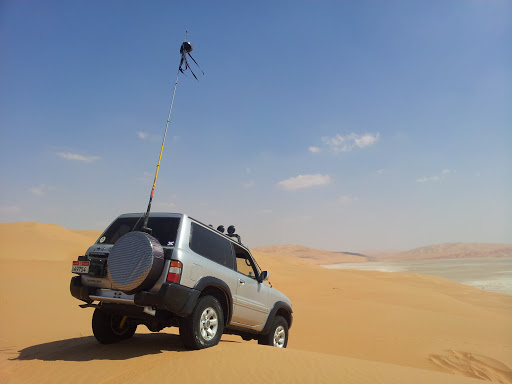 I’ve written before about Mike Nott’s Off-Road Adventure Routes book, and after perusing it on Google Earth and making a couple of re-routes to avoid an oilfield and line up with a gap in a fence, we used route number three as the basis for our long overland on Friday 2nd November. 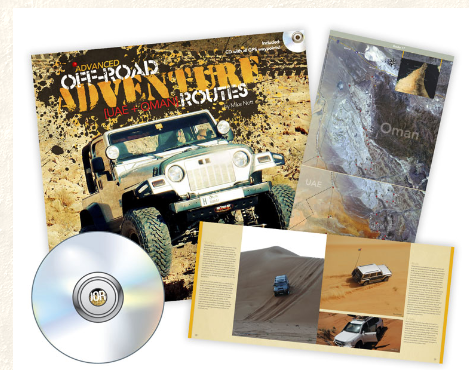 We headed down to Mizaira’a on the Thursday afternoon, for the first of two comfortable nights in a newly upgraded room at the Liwa Hotel on top of the hill there.

Next morning we were up and out early, aiming to be on the sand about 8.30am, and we almost made that time, having detoured to the ADNOC for a caramel latte.

The first part of the route was very easy and we’ve driven it twice before; whilst doing so this time we noticed three cars on the sand – one local in a white patrol and two jeeps we had seen in the Liwa Hotel carpark.  We turned right over a duneline whereas they headed straight on up the sabkah, so we were surprised to see the two jeeps tailing us by the time we had dropped over our first big slipface just ten minutes later. 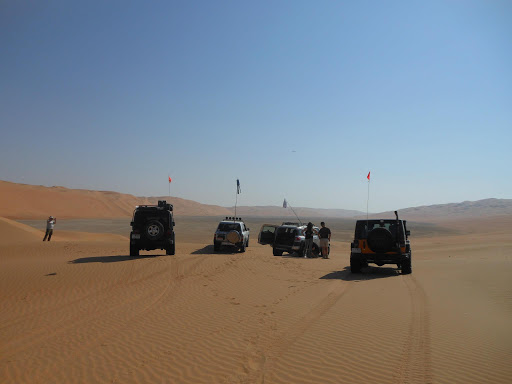 We stopped and had a chat “Are you by any chance following route 3 out of Mike’s book?”.  Turns out they were, so we asked them if they would like to come with us but also gave them the option of giving us a 15 minute headstart should they want to do the route on their own.  Steve and Tom were quite keen to come with us, and we were very happy to have them along, having four cars in a convoy is about 10 times safer than just having two!

The first major challenge of the day was a bowl, a very deep, soft, plant lined bowl.  Neil dropped down and powered out no problem at all with his 240bhp and auto gearbox. 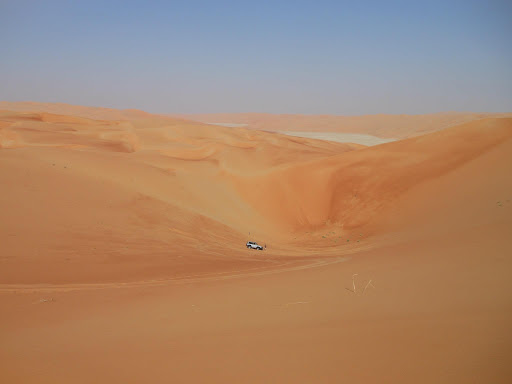 I was committed to following him and struggled to harness enough power to make it all the way to the top.  Tried low range, high range, straight line, corkscrew, back and forth, finally deflating to 9psi and gaining enough traction and power to make it to the top of the rise, cheered on by our new friends!

It took me 13 attempts and over 14 minutes to escape from here – I could have set up camp and had the kettle boiling quicker! 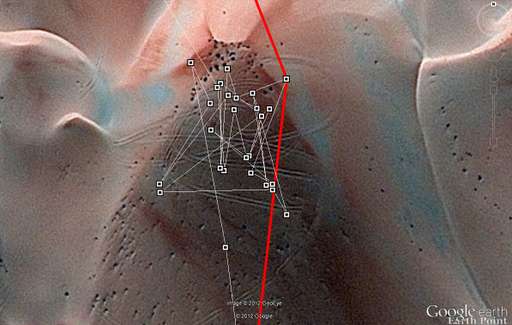 I didn’t feel so bad once I got home and overlaid my track on google earth.  It’s clear from the tyretracks taken by the GE satellite almost a year ago that I was not the first person to find this bowl “technically challenging”.

Our next little bit of fun was when we met this water tanker driving over the dunes.  He stopped, we stopped, the guys offered him some cola/sprite/water, but he waved them away and pointed at me!  Thankfully Neil did not trade me for some dates, though maybe some of the other guys were tempted.  One thing is for sure, on future Liwa trips if I see an orange truck like this it will be yalla yalla (let’s go, hurry) in the opposite direction!  The driver, we think a local, probably thought I was morally bankrupt, dressed in my hot weather desert uniform of tight animal print leggings and a clinging running top, out driving with 4 other men, none of whom appeared to be my husband (he probably  wouldn’t understand why a man would let his wife have her own car to drive in the same place as him)!  I wouldn’t wear clothing like this in public places in the UAE, but who would have believed we would encounter a local in the middle of nowhere.

We had another technically demanding bowl, this time it was Steve’s turn to fall foul of soft sand and gravity, but he managed to drive out whilst being assisted by my winch.

We drove on, weaving through the dunes in some tricky areas, over sabkahs, past some majestic slipfaces, and very soon we found ourselves near the end of the route.  I was leading at this time, along a recently maintained smooth gatch, and took the team up to our favourite Liwa viewpoint – “google earth view plateau”. 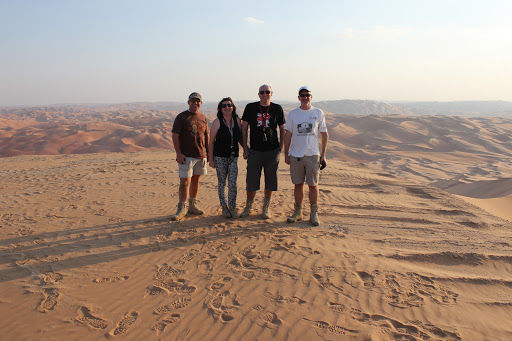 Steve’s dad John, on holiday from the UK, was his passenger and all day had been snapping away taking photos; I was delighted to see how pleased he was that we had made the detour!

We exited the desert via a sandtrack and gatch, then bid farewell to Steve, Tom and John, who were heading home to Dubai, some 4 hours’ drive away.  Turned out that they had only planned to go to waypoint 12 on their own, only 60kms into the route, but we had dragged them along for 160kms!

We had another night booked at the Liwa Hotel and enjoyed our usual relaxing evening with a room service steak dinner on our balcony!

We came back to Al Ain via the sandtrack past the plantations and were lucky enough to see four Oryx.  One group of three darted into the trees as soon as we approached, but this young buck calmly watched us for a few minutes before running off into the dunes.

There were gazelle everwhere too, we’ve crossed the desert using this track five times now and never seen so many.  Our final antelope encounter was with these four gazelle grazing on bushes only 50 metres from the sandtrack.  We could probably have seen more if we had hung around and waited but as you will note from the shadows the sun was low in the sky and we wanted to get onto blacktop before sunset. 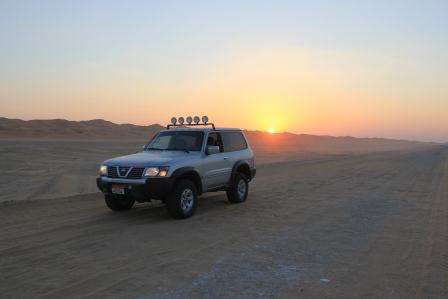 and we almost made it!

Here’s our Friday track – big thanks to Steve for providing this and letting me use some of his great photos of our Liwa adventure!