The Western Part of the UAE is about 99.9% desert, and is known as the Maghrib area.  I’d never gone beyond the big dunes in the Arada area, so back in November when Kevin of ME4x4 let me know about a 2 day driving and camping trip here I instantly said yes!  In fact I think I maybe said “yes, I’ll load up the car, be ready to move in 15 minutes….”.  The trip wasn’t til the first week of December so I had plenty of time to anticipate and prepare, and find a willing passenger to share the adventure.  It didn’t take much to persuade Heidi that she would enjoy being my passenger for this trip (and could she please take her camera!).

The desert entry point was at Gayathi, not the easiest place to get to from Al Ain, and we took a rather long but very interesting route via the Haleeba sandtrack where we saw plenty of gazelle and a couple of Oryx.  We also stopped for some pictures at the dead landcruiser and the water trough, who says there is nothing in the desert but sand?

It was late in the evening until we got to the resthouse, in fact when we arrived we didn’t know for sure we were in the right place.  The GPS co-ordinates were correct, but it seemed to be a building site with predictably for this part of the world, no signage!  This was the most bizarre place we have ever stayed in. 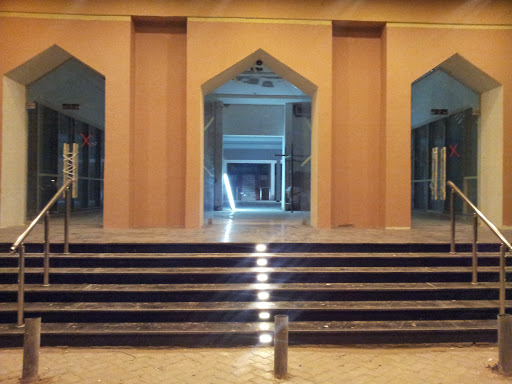 It’s the old resthouse with a new one being contructed round the old one, which is so wierd – why didn’t they just knock the old one down?  Even though it’s not finished, they are still charging 4 star prices – the rack rate for the room is 400aed including tax but excluding breakfast, which is expensive for what it was, yet it’s the only option in that area unless you plan on camping!

The Reception Area Corridor.  “Can you tell me if your fire detection system is working”.  “I’m not sure madam, you see we are in the middle of construction.”  I know, only the wife of a firefighter would ask that question! 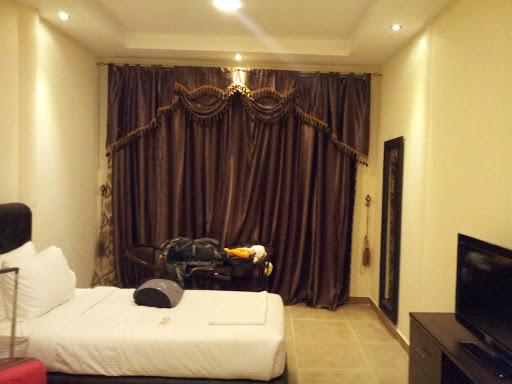 Rooms were very nice.  Beds comfortable, water hot, and we had a good rest.  We went out and had a lovely meal at Ali Baba and the Forty Farooj (bandits), well we had to because the resthouse restaurant was not yet built.  “Be ready in two months, madam”.  Yeah right, I guess that the two months the receptionist referred to will be July/August 2015 (but I was wrong!  Finished and ready to open on 1st July 2013!) 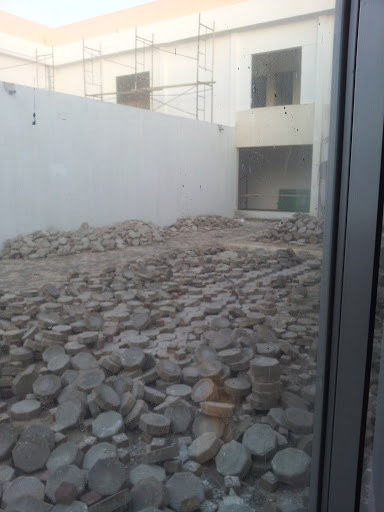 The view out of our patio window.  In case of fire, don’t fall over the lockblock that’s strewn all over the couryard!

Here’s Karen and Heidi posing in front of the grand staircase whilest bidding a sad farewell to the Gayathi resthouse!

We headed out to the desert, and straight away hit some really tricky dunes with stratification at their bases. 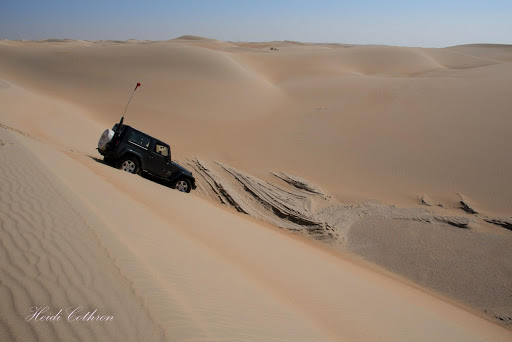 The sand was damp on top but unbelievably soft, and the Liwa newcomers found it a steep learning curve at times!  They did really well though and I think it’s fair to say that Kevin now has another four Liwa addicts on his hands!

The dunes were sublime and after about 60kms of the tricky stuff we moved onto wider, smoother dunes and made good progress to our campsite. 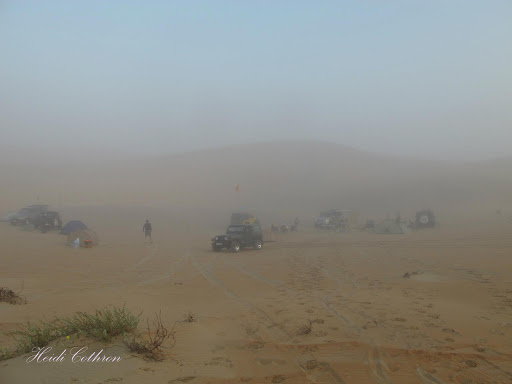 We were delayed for a little while in the morning til the fog cleared – it is very dangerous to drive in fog, as you could easily fall off a dune sideways since you can’t see a thing.

We paused at the confluence point of the lat/long 22 degrees north and 53 degrees east – it’s damned hard to get a picture of all the zeros, damned satellites keep moving! 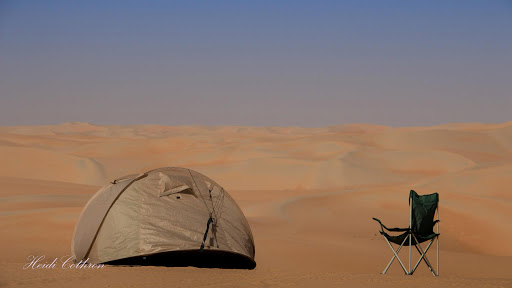 Kevin picked  a great spot for lunch, and one of the team took the opportunity to dry out his tent and his camp chair, damp after the morning fog. Very soon we were on our way again and through the higher, more technical dunes.  I sustained a punctured tyre which necessited a desert wheel change – thanks Kev!

By 2pm everyone was showing signs of tiredness, more stucks and situations, so we headed to the blacktop via some farms.  Whilst inflating my tyres I noticed I had a huge bulge on a rear one, – and of course my spare tyre had already been deployed – so the convoy drove very very slowly towards Mizairah and a tyre shop.  With just 10kms to go my tyre blew out, I always drive with my windows down so I heard it long before I felt it, so there was plenty of time to park it up on the hard shoulder.  There was nothing else to do but take the spare wheel off, go to a tyre shop, get a tube put it in, then use it to change with the blown out tyre.   Kevin changed this one too for me – and once we all had a fine meal in a Bangladeshi cafe in Mizairah, the Dubai contingent went home and Heidi and I stayed the night in the Liwa Hotel.

None of us had anything urgent to return to Al Ain for, so we took our time heading home.  Stopped to “help” someone who wasn’t moving… ok just took photos, but it was great to have a bit of fun! 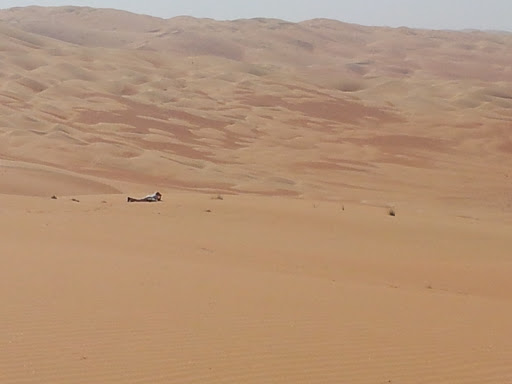 We headed over the sandtrack between the Qsar Al Sarab and the Plateau, the sand was so soft I had to deflate to 25psi!

Had coffee in the Qsar – and very fine it was too!  26aed including tax, and you can spend ages reading the wonderful collection of books in their library or admiring the wide array of artefacts such as compasses that they have on display.

On the way out we were flagged down by the driver of a car stuck in the sand on the hard shoulder.  I think I could have driven his car out but I winched him out to spare his feelings!

Finally we were on the last leg home and we just HAD to stop so Heidi could get this wonderful shot of a herd of camels all sporting new jackets!  What a blast of weekend – thanks Kevin for having us on your trip and a big thanks to  Heidi for coming with me and sharing the fun and of course letting me borrow her photos! 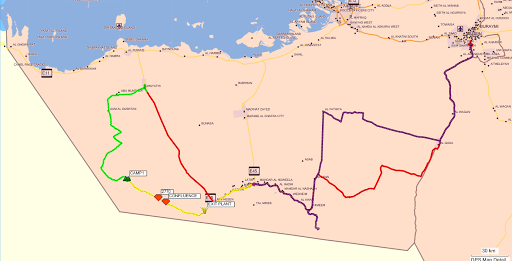 Here’s our route – 7th-9th Nov 2012.  The offroad section was based on a route from Mike Nott’s great book “Adventure Off-road routes in UAE and Oman”.