January 2013: Oman exploring day Two:  After a lazy morning I headed towards the Muttrah area of Oman which is famous for its harbour and its souq.  Today, as throughout the months of December to March, they were of mutual benefit – a huge cruise liner was visiting, with a potential 2500 tourists eager to part with their cash in a “real” souq.  Every tourist in Oman visits here so in terms of blogging this has been extensively covered so I am going to try to bring you photos of some alternative views which are just a little off the beaten path. 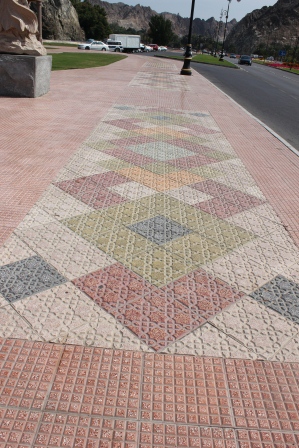 The weather was a warm and pleasant 27C and I chose to park away from the main thoroughfare which is extremely busy and the parking is chargeable.  I had to hike a good 1.5kms to the souq, but there was plenty of interest to see along the waterside.  The first photo above, far from being off the beaten path, IS the beaten path!  The pavement is tiled with feature insets which are inspired by arabic rugs, and they all seem to be slightly different. I wonder how many people actually look carefully at these? 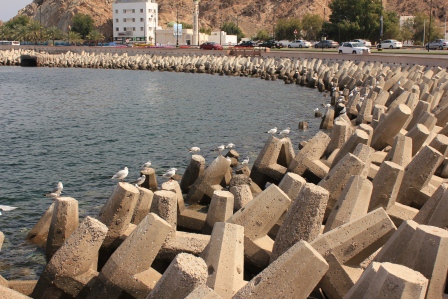 Any time I have been here before I thought these were long spikes of concrete which were dropped at random to protect the harbour wall from the sea, but on close inspection they are a rather complex shape which surely must be built up in layers.  Great spot for seagulls to preen themselves – they seem to be much quieter than their NE Scotland cousins, the scurries!

All along the seawall there are inset panels each showing a cultural icon of Oman; from thhe Khanjar to traditional sailing ships, they are all covered here. More photos of these will be uploaded on my facebook page.

In this photo:  Mutrah Fort, built by the Portugese circa 1600AD and captured by the Omanis in 1654AD (source Official Guide & Atlas Oman – thank you so much for giving me this book Paul!)  Also the well tended Muttrah corniche with colourful and well tended flower beds, as well as more “inset carpets” on the pavement.

Once you’ve bought your souvenirs from the Souq, I recommend you start walking up some of the side lanes to see what you can discover.  Just keep a mental note of where the sea is and you will be able to find your way back to the corniche via the maze of tiny streets. 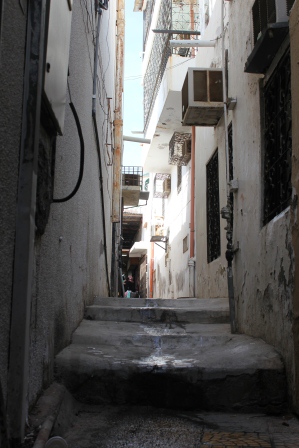 Most of the souq area was built long before cars came on the scene.  Fact: did you know that in 1970, prior to Sultan Qaboos taking control of the country, there were only 3kms of paved roads in the whole country!

I’d never have left any of my soft furnishing stock outside in the UK – if it didn’t get ruined by rain it would have probably “walked”!

Doesn’t look to be much eating in that side of mutton!  Butchers here seem to specialise in only one type of meat per shop. 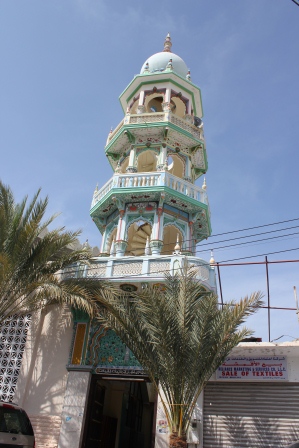 Got to be one of the most unusual and pretty minarets I’ve seen.

Definitely worth a close up – look at the detail!

Someone has made a bonny garden in a quiet shaded corner.

The doors in the traditional cities of the Arab world can be very decorative. 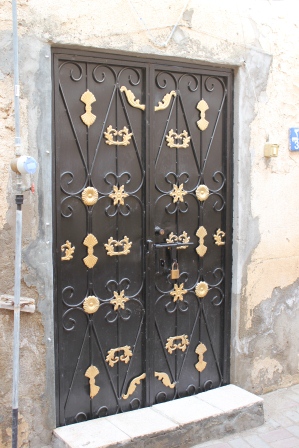 Even the modern replacements are amazing

Though if you have plenty of time on your hands and a tin or two of paint….

The big cruise ship in the background is the Serenade Seas of the Royal Carribean Line.  More interesting to me however is the small catamaran which is circled above – this sails north, then west through the Straits of Hormuz before arriving at Khasab.  Neil and I are hoping to travel on this high speed ferry in May, you can read about the service here.  Note – added 2017, we still have not managed to schedule this! 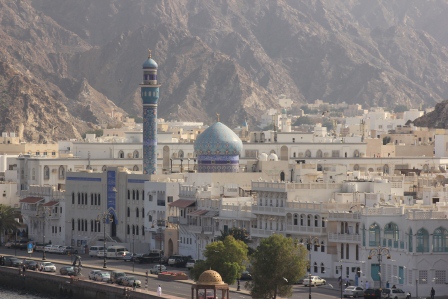 I went to have a coffee in the Marina Hotel which is adjacent to the port entrance.  It has a 5th floor rooftop restaurant which has stunning views of Muttrah.

A different view of the fort.

I love these old buildings with their cantilevel terraces – best view in town and must be cool there in the summer months.

I headed back to the souq after the lunchtime break and instead of looking at the frankincense, pashminas and t-shirts pointed my lens upwards to capture this beautiful ceiling.  Woven from palm fronds I feel certain that this would have attracted comment from my ex-fire officer husband! 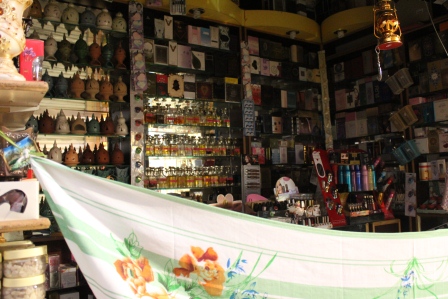 Once at the “top” of the souq again I paused to take a photo of the minaret… then noticed the young Indian man perched atop the mobile phone mast taking pictures of the souq area… with his phone of course!

On the walk back to the car I discovered a geotrek around Muttrah, with a downloadable ap for iphones and android!

I made it back “home” to my friend’s apartment in the North of Muscat just as the sun was setting.  I couldn’t resist a walk along the beach. 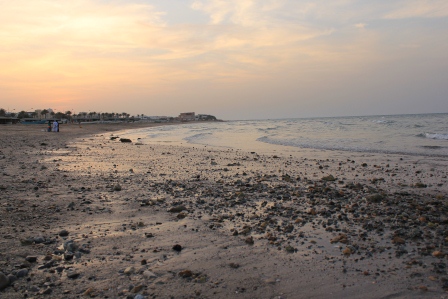 And so ended a most interesting day in magical Muttrah and Muscat!