Following on from the great day out I had with my hubby in Sur on boxing day I decided to make a return visit and do some of the things we didn’t have time to in December.  I hit the road from Muscat early to cover the 200, or was it 300km, journey by lunchtime.  Why the confusion?  In booking.com, some Sur hotels have the distance from Muscat Airport as 200, and others at 300; my beloved Atlas of Oman has the distance at 337.  Add into the equation the distance covered on our previous round trip was about 500kms and you will see why I am confused.  Pleased to report that from the the Sultan Qaboos Mosque to the outskirts of Sur is in fact 237kms!

I hadn’t planned on making any stops before Sur but this caught my eye as I drove across a “high bridge” – Wadi Shab.  Will visit tomorrow!

I made a quick photo stop in Sur to capture these flamingo again, as you can see they were pretty nonchalant – maybe they recognised me from 5 weeks ago!

Once on the road to Ras Al Hadd I slowed down a bit to allow these sheep to cross the road, I’m sure there is a joke there somewhere

And then I just had to stop for this sign!

I’ve always said that if you can go for a week in the Gulf without seeing something that strikes you as bizarre then it’s time to go home.  Definitely ok for the next few days!

I’ve been trying to go to slightly out of the way places and today’s favourite find was Khawr Grama.There was a sign at the end of the road telling you to keep off the sand if your car is “non 4×4” and to “drive carefully on mud areas” – sounded like my sort of detour!

I spied another flamingo or two

and lots of seagulls. There are some mangroves here, ideal for those who are missing their visits to Khor Kalba which is closed for redevelopent.

And found more flamingo… damn I had to walk back to the car and get my long lens to catch this one!

Returning to the blacktop I soon reached Ras Al  Hadd, which like Ibri has a beautifully renovated fort (closed Fri and Sat), with some old buildings beside.

It’s also got a lovely bay and reminds me of Findhorn somewhat – apart from the fact that the North of Scotland will never see 28C on the 1st Feb!

I visited the Ras Al Jinz Turtle Centre a few kms down the road.  Back in 2008 I was lucky enough to camp here and watch the turtles come up to the beach and lay their eggs, but the visitor centre was closed when we were there.  They have stopped allowing camping on the beach and instead have escorted tours down there in the mornings and evenings for a small fee.  The visitor centre was good value for the 1 OMR entrance fee.

I was keen to get down to the waterside and shortly the road and beach appeared side by side.

I followed the coast road down to As Siwayh, noticing a few new bridges as well as one or two detours.  Back in June 2007, Oman was hit by Cyclone Gonu, and many bridges disappeared into the sea.  Last time we came up this road there were sand/rubble bridges across some small creeks and some still remain though there have been big improvements.  In the photo below, not only the original bridge but the replacement in the foreground have been obliterated by the weather.

Turning right for Jaalan Bani Bu Ali the road crossed some beautiful terrain.  Just had to stop to get a picture of these feral donkeys watching me take a photo.  Maybe this was their “bizarre sight” of the week – there aren’t too many white women driving FJs in rural Oman!

I would have liked to have stopped more and taken many more photos, but with the sun low in the sky and my need to get to Sur by sunset (after living in the UAE for more than 4 years I’m just not used to driving on a dark 2-way road) I had to press on.  I didn’t get a chance to catch the “Beware Tunkers Crossing” sign, nor did I manage to immortalise the bad-ass highly modded all black Jeep Cherokee with 4 lights mounted on the roof rack – the covers were the yellow KC ones with the smiley face!  This wadi was worth stopping for, very beautiful particularly in the “magic hour” before sunset. 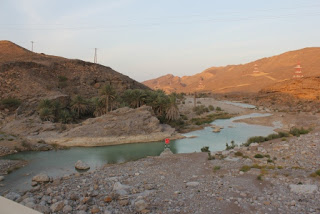 I made it to the Sur Plaza Hotel as dusk fell – it’s way too far to travel back to Muscat as I am tired having covered 485kms today.  Thank goodness petrol is 0.12OMR/litre (that’s just under 20p).  For the price the hotel seems very good, 275AED for a single room which is spotless and has a comfy enough bed!

Further pictures from today will be uploaded to my blog’s facebook page.

Routes and waypoints available upon request.