I love desert driving with a purpose – be it teaching someone to drive in the sand, exploring new areas or even supporting a group of (mad)men attempting to cycle across the Liwa Crescent!These were no ordinary bikes – Surly Fat Bikes with massive tyres 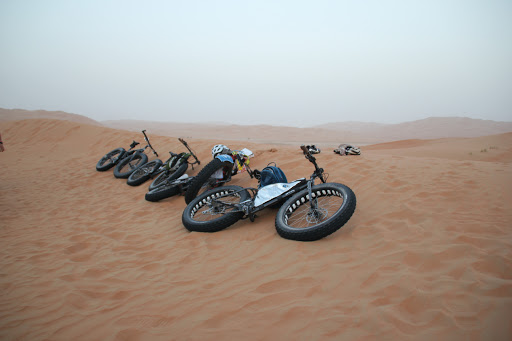 which made tracks one would expect from a motorbike tyre. 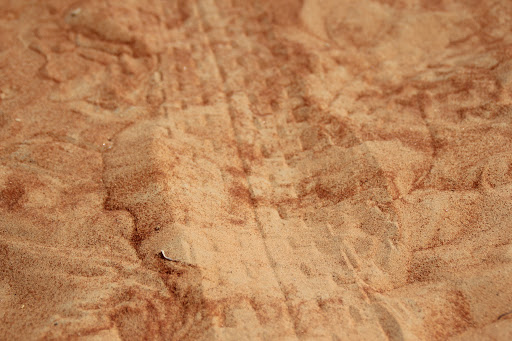 And these were no ordinary cyclists – superfit individuals who had been training for this moment for weeks.  Well all apart from Mike who had taken delivery of his Fat Bike only two weeks previously!

It was decided that since I was the most experienced at driving in the Liwa Crescent that I should lead the support convoy on a track based along Mike Nott’s “Liwa Crossing” from his excellent book – Off-Road Adventure Routes: UAE & Oman. I had three very capable and experienced offroading drivers following me; one lexus 450 and two nissan patrols.

Apparently much google earth studying had taken place by the bikers as they strived to find the best route for the cycles; ie short dune crossings and long sabkahs.  This wasn’t always the optimal line for cars but it added a whole new layer of challenge for us!

On the Thursday night we stopped at the Arada road and camped, awaiting first light to allow the biker boys to set off.  Judging by the laughing and joking before dawn, they woke in good spirits after only 5 hours’ sleep, thus ensuring a send off from the rest of the team who may or may not have been quite happy to sleep for a while longer! The support team set off about 3 hours after they had started; we needed to catch up with them by lunchtime as we were carrying the food and extra water yet we didn’t want to be too close to them for safety reasons.  This added a little frission of excitement/urgency to the trip – the bikers were relying on us for their safety and welfare – and gave me an excuse to bomb across the easy bits. 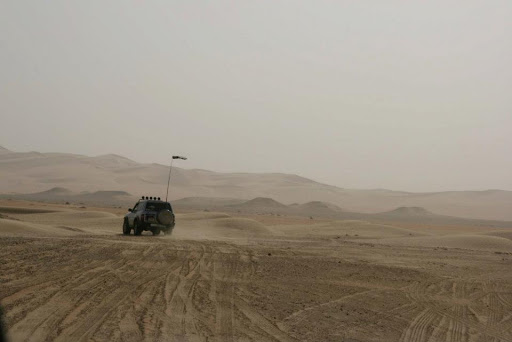 As convoy leader it was part of my remit to discover obstacles that the rest of the group shouldn’t follow me into – a task I approached with relish!  This was a deep and steep sided bowl, and I believe others in the convoy were taking bets on my chances of getting out under my own steam – and I did! 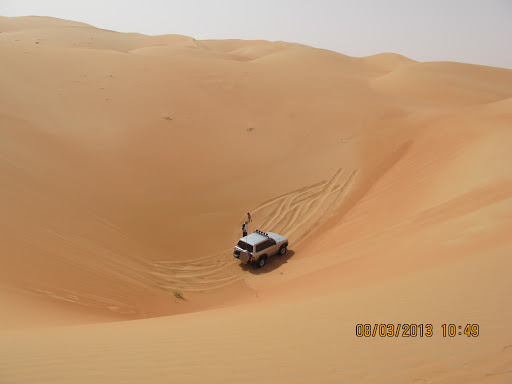 This turned out to be GREAT practice for the “tourettes brothers and sisters” series of bowls around waypoint 16!  It was imperative that we didn’t get all or even any of the cars terribly stuck here – the bikers were counting on us.  Why the nickname?  As we entered each successive bowl we were muttering “sh*t, sh*t, sh*t, sh*t” or worse!  Glad my passenger was ex military! In the photo below you see the rest of the team were willing me to get out of here easily….. because they had to follow me!  At this point, and only at this point, I was wishing I was riding one of the bikes – they had no need for massive acceleration hitting off the rev-limiter as well as lightening fast gear changes to move 2 tonnes of metal up steep gradients; if they couldn’t make it they could get off and push! 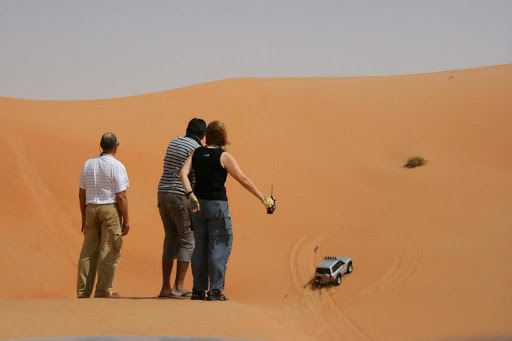 And now a word about my great passenger Pete.  A keen biker, he had been due to ride the route on a fatbike but after a bout of flu he wasn’t feeling 100% fit so opted to experience the Liwa crescent for the first time in the “comfort” of my lovely car.

At the start of the day when we were stashing all our gear under my cargo net, he looked worried and asked exactly what the drivers were planning to do to make it so necessary to secure our load (and two wooden pallets on top) – but I reassured him this was just standard safety procedure, you could get knocked out or worse from a flying tin of cola if the car comes to a sudden stop!  This was his first time bashing and he was an excellent passenger; a calming influence in the tricky spots and was very good at digging and deflating tyres!

I’m not a stranger to long distance offroading and normally I like to drive until the sun hits the dunes but for once I was glad to stop and camp well before nightfall.

We had a bbq and a blether, sharing food as offroad groups always seem to do, followed by a campfire. Karen and I had travelled offroad for part of the way to Liwa and had picked up a couple of abandoned pallets for this very purpose and it was a great relief to have them out of the car. 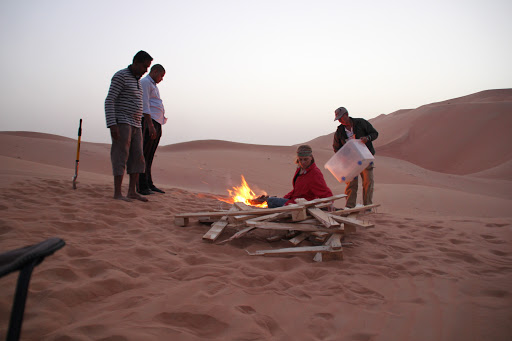 Next morning I awoke after the best ever sleep in my tent – this trip was my first time leading in the Liwa Crescent and it took a lot more concentration than following in a convoy so I slumbered for about 9 hours!

We set off a couple of hours behind the bikes and the route on the whole was easy with lots of gatch and sandtrack, however we had to make two extremely tricky dune crossings where I even got crested.

We cruised round to the Qasr Al Sarab area where we found a great vantage point to take some photos, but unfortunately there was a lot of sand in the atmosphere so it wasn’t the best day to take clear pictures

Liwa is a seriously big place if you are on a bike – click on the photo below to see the biker.

The bikers arrived at the route endpoint – the gatch behind the Qasr Al Sarab Hotel – around lunchtime. 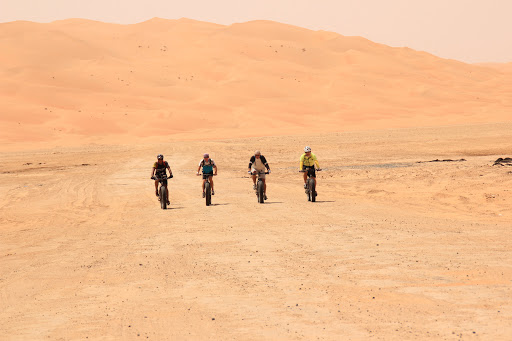 All that was left to do was give the bikers a bit of a help to get to the hotel – now don’t try this on the blacktop folks….

The Fat Bikes were incredible – you can read more about them here.
There’s also a good article in The National newspaper that’s worth a look.
You can buy the Surly bikes from all good bike stores.
There will be an article on the trip from the bikers’ perspective soon in the Outdoor UAE magazine..
If you’re a cyclist in the Emirates it’s worth checking out the facebook page of Arabian Sand Bikers.
Finally the thank yous
To a wonderful team of drivers and passengers who made the journey so enjoyable: Karen, Alf, Sudhir, Pete, Guida, Gail and Luke – thank you all for following me!
To Mehran’s Garage garage who pulled out all the stops to get my car ready for this adventure, and also to  Al Shiba Trading who repaired my holed fuel tank super-quickly and free of charge!
And last but not least, to Mike, Ian, Shaun and Philip for asking me to be part of the support team and for trusting me to lead the cars through some extremely challenging terrain!  Well done guys, what a physical feat you pulled off, hats off to you all!

Photo credits:  big thanks to Guida and Gayle for kindly allowing me to use their photos to illustrate this blog.