Our FJ was piling on the KMs, and we sadly had concluded that it no longer suited our needs – we needed something bigger for our long overland planned for October this year.  So we sold it to our friends – having told them of its flaws idiosyncrasies, which were not many, and checked with our mutual garage owner that the car was sound enough to sell to a friend – and started shopping.

We braved a heavy rainshower and thunderstorm to wander around the used car lots in Sanaiya, Al Ain.  The ONLY car on our shopping list was a Nissan Patrol LWB.  Maybe a slightly newer model than this one though! 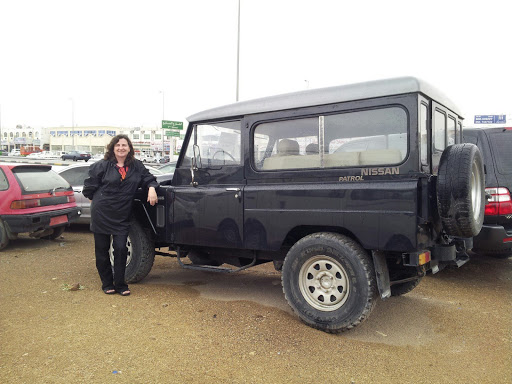 One feature of car dealers here is that there is no info leaflet stuck in/on the car – sometimes you even have to ask around to see which dealer is selling it!

It was important to us that our new car was manufactured in 2008 or after; you can only get fully comprehensive insurance on cars 7 years of age or less in the UAE, and we plan on keeping it for at least two years.  The Nissan Patrol had a “facelift” in 2006, so although our idea of going to have a good look around in the afternoon when we could get peace and wouldn’t be accosted by vendors was sound, it backfired on us as the 2009 models look the same as the 2006 ones.  We identified a number of potentially suitable cars and returned during trading hours (which are about 9am-1pm and 5pm-9pm) to try to locate them again.  Virtually every one we saw was pre-2007, though someone did offer us a nice 2010, but it was a bit above budget.  Many of the salesmen don’t speak much english, which is good in a way as they can’t try to tell you “one lady owner” “never been offroad” and “you’ll never find a car as good as this anywhere else”!

The age requirement was narrowing our shopping possiblities and we were away to reduce it even more…. 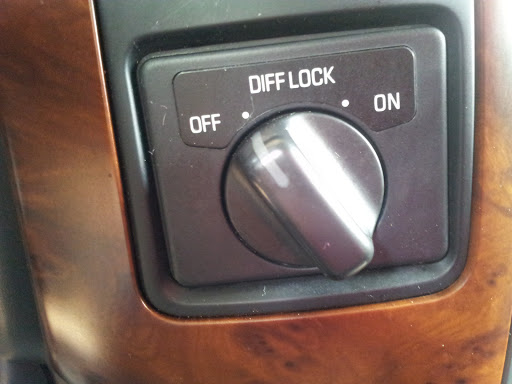 You may have noticed that we drive away into the back of beyond with just two cars, so difflock was essential with a long wheelbase.  We also wanted a subtank, which holds an extra 40 litres of fuel, reducing the need for jerrycans on moderate offroad journeys.

One thing we didn’t want was a sunroof – why I hear you ask?  (My mum should skip the next few lines and maybe the next photo too).  When a vehicle ends up on its roof  – and it is a risk everyone takes when they go dune bashing – one with a sunroof is less likely to be repaired successfully as the very nature of the sunroof affects the structural strength of the car.  Here’s one unlucky participant from the recent ADDC.  It looks really bad but a) I believe nobody was hurt in the accident and b) it still drives….. after all it’s a Nissan! 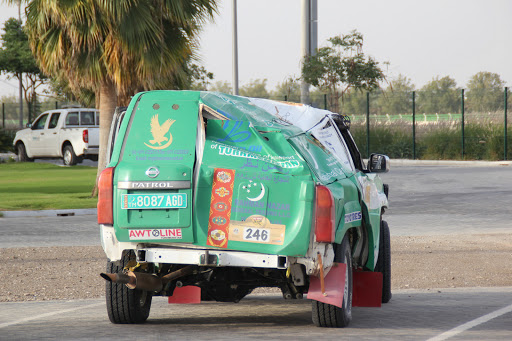 Our next stop was Ras Al Khor in Dubai, where in true Arabic style, there are many independent car dealers in one area.  Surprisingly there were not many Nissan Patrols but on reflection, there is less of a market for heavy duty kick-ass offroading vehicles in Dubai than Al Ain.  We did see a 2009 Super Safari on one lot which looked great from the other side of the road but on close inspection this one was telling us “I’ve been thrashed and rarely maintained”.  The dealer did say “it’s a very clean car”; clearly they have a different definition of “clean” in Dubai!  One salesman desperate to secure a sale did offer us some other cars on his forecourt “we’ve got this great range rover”…. er no thanks!

So back to Al Ain to try to find the 2010 Nissan Patrol we’d seen the night before – did I tell you there are lots of them for sale in the garden city?  We found it, test drove it – the salesman thought we were a bit of an odd couple as I was the more active participant in the inspection and financial transation – haggled a tiny little bit then arranged to return in the morning with a great big bundle of cash.  Yes really.  A cheque would have taken a few days to clear and goodness knows how long it would have taken for them to verify an online transaction!

Now here’s the first glimpse my sharp eyed friends got of our purchase. My beloved SWB 1999 Patrol got a respray last month and in the background is the new Patrol “hidden in plain sight”. When I uploaded this to my facebook page most of my friends didn’t notice it!

We were determined that the new car would not hit the sand without heavy duty shocks and springs and a bash plate – we chose Old Man Emu sourced from ARB in Abu Dhabi and fitted at Mehran’s in Al Ain. The aluminium bashplate came from Al Shiba trading in Dubai. 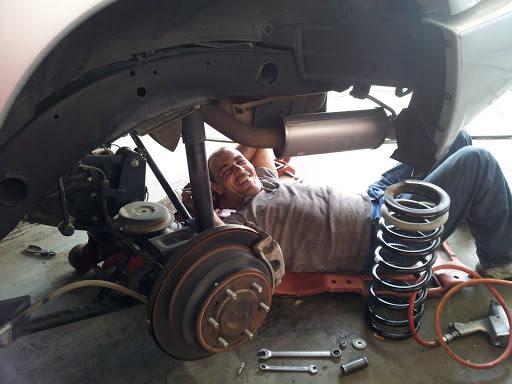 I stayed at the garage whilst the work was being done, having dressed in old clothes in the hope they would let me help with the operation.  Alas no, it is so culturally wrong for a woman to do “men’s work” they wouldn’t let me do anything except bring tea and take photos.  After much insistence they did let me put one of the tyres on with the pneumatic gun!  The next morning – yes we really did wait for 20 hours – saw us out on the sand for a test run.

Neil put it through it’s paces… 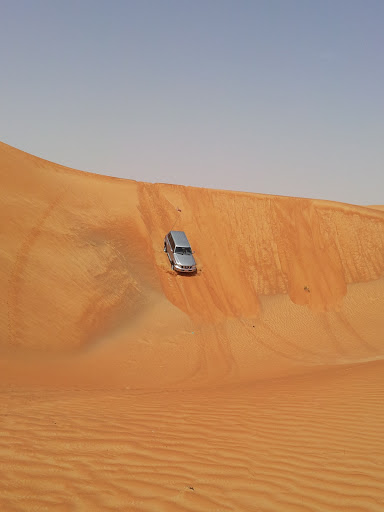 and here is a fabulous photo, taken by our lovely friend Heidi, of our Neil’s new car in it’s natural environment!   So why the title?   Neil doesn’t believe in naming his car, though “Clint” (Eastwood) from the western series “man with no name” has been mooted!