You might have noticed I’ve been away for a good chunk of October, the reason for the blogging hiatus is that we were on a 20 day grand off-road tour of neighbouring Oman.

The first 8 days were spent following Mike Nott, he of Offroad Adventure Routes: UAE and Oman fame, as he scouted out some new routes through the interior of Oman.  Then we had one night on our own at the wonderful beach campspot, see below, before having four days at the Samhram Tourist Village which is a hotel apartment complex in Salalah offering basic accommodation at a reasonable price.  The next two nights were spent at the Marriott at Mirbat, some 80kms North East of Salalah where we enjoyed the luxury very much.  Finally it was time to hit the road/sand/gatch track and head north, necessitating four nights in our tent (there are no hotels once you are often “off the beaten track” in the Empty Quarter).  Our last night in Oman was spent in the Ibri Oasis Hotel, basic but pleasant with nice food, comfortable beds and cold beer!

Here’s a lowdown of our camping spots –

We arrived at the start of the route in complete darkness at 10pm, so we had no idea of the view we would wake up to; we were camped on a gravel plain 22kms from Adam. 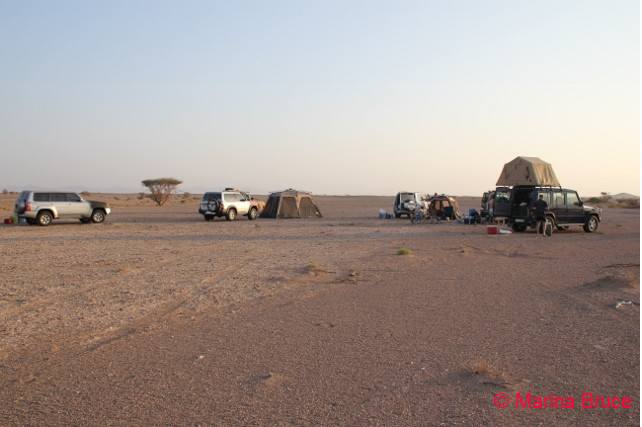 Night two found us tucked up in a sandy gully surrounded by rocks – this was the only night it was truly too hot to be camping comfortably.  Photo by Ian Huggins I think – he’s the only man armed with a camera that I saw climbing the rocks above our campsite. 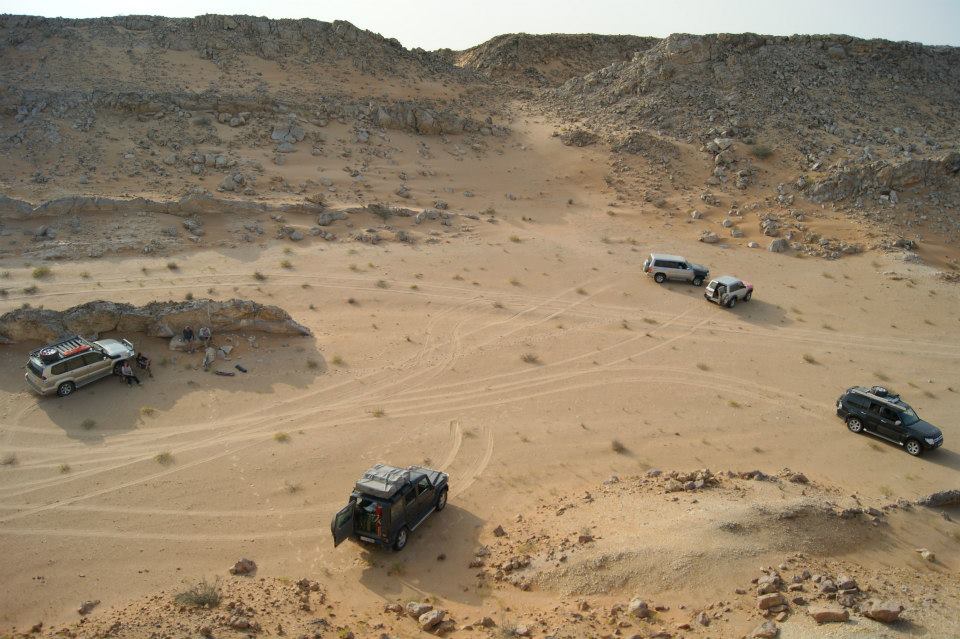 Night three – more rocks, this time on a small plateau which was near a gatch track.  Every Oman who passed came by and exchanged greetings, asked where we had come from and where we were going.  All no doubt thought that there were six completely mad people camped nearby!  Special mention must be given to Mike Galvin who foraged for firewood every day to ensure that we had a great campfire every night of the camp! 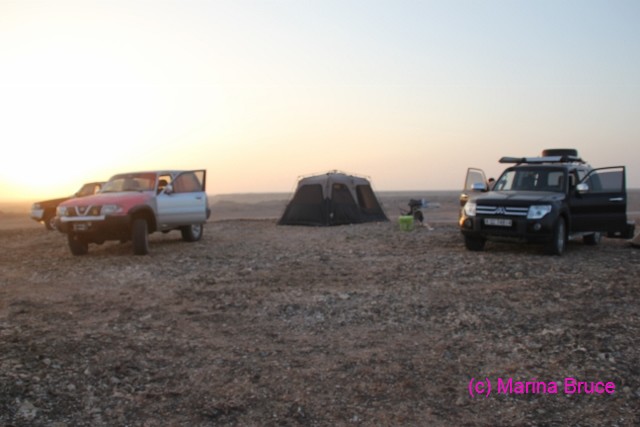 Night Four – we had finished the first route, a whopping 540kms, over a mixture of wadis, sand and gravel tracks and now it was time to head up into the mountains for some scenery.  I didn’t go near the edge here, in fact our tent was pitched in the adjacent carpark on the tarmac behind a crash barrier!  View was wonderful though!  I think this photo was taken by Mike Galvin, well I will give him the credit for it anyway – he’s the brave man who pitched his tent 20cms from the abyss! 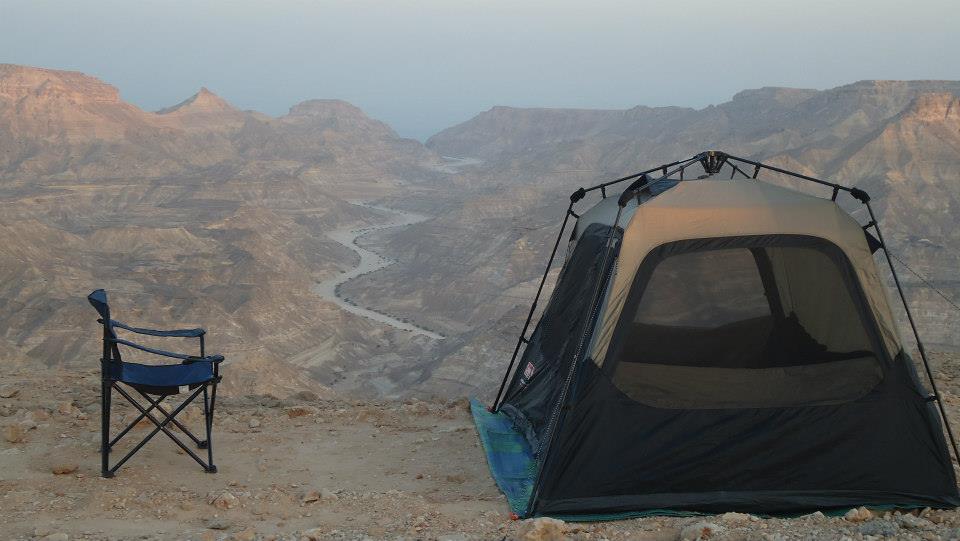 Night five found us at the edge of a shallow wadi, at the start of our next day’s expedition 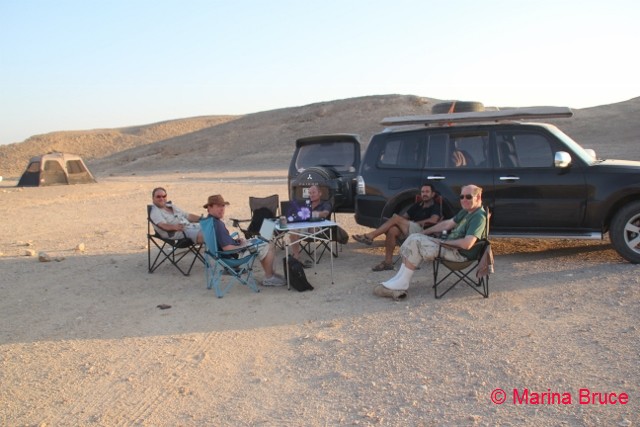 Night six saw us up in the mountains again, at the “end of the world” campsite –  you might have to click on the photo below to see us!  Picture credit: Ricardo.

The campsite also afforded a great view for those willing to park their chairs close to the edge….. far apart though, none of us had seen a bath for a week! 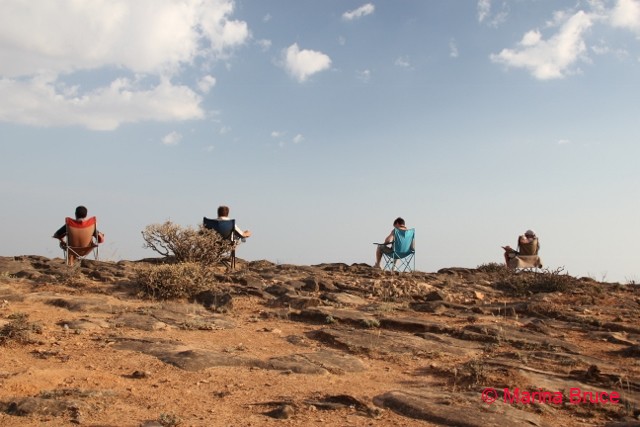 Nights seven and eight were at my favourite camp, a beach about 20kms from Sudh/Sadah (same place, different name spelling dependent on the sign!).  This was the last night we were accompanied by Ricardo, Mike and Ian who started the long trek home at first light next day – we were only too happy for them to leave us on the beach, as it was a most interesting place to be.  We spotted herons, waders, turtles and even a dolphin during long hours gazing out at the ocean.  This beach is one of several which are very much “off the beaten track” and only used by local fishermen. 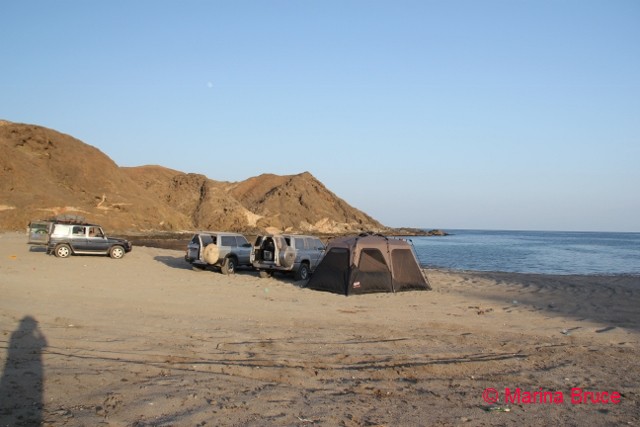 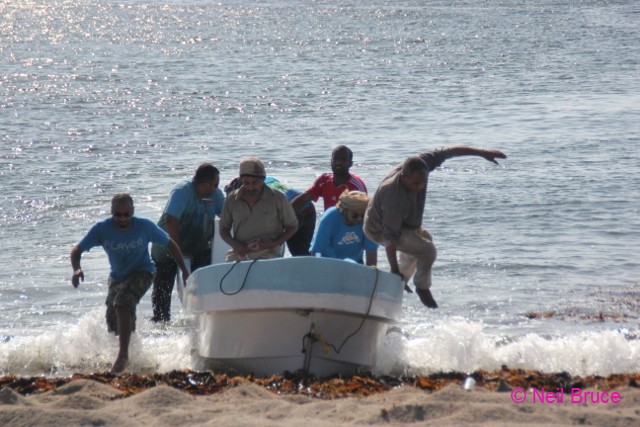 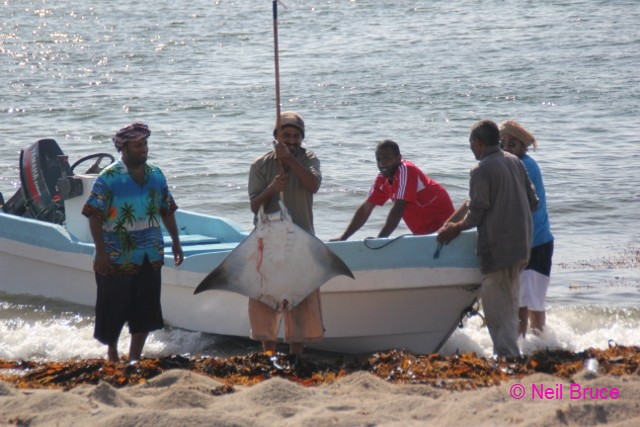 Our tent was next put into use when we drove Mike Nott’s Oman Empty Quarter Route  and our first night was spent in the lovely Wadi Aydam.  This is Neil taking down the tent since I forgot to take a picture the night before. 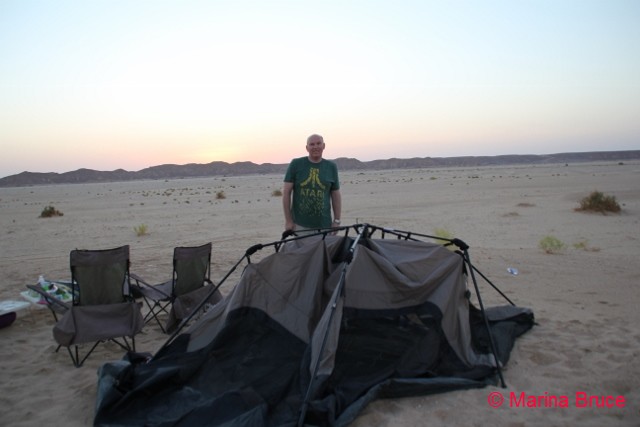 He’s looking a bit tired as the previous evening we had been aware of some animals near our tent, turns out it was a small herd of camels.  You cannot believe how noisy eaters camels are, crunching their was through shrubs and bushes only 10 metres or so from us.  Once they eat their fill its time for them to chew the cud again, making belching and gurgling sounds.  I guess I am not ready to be a Bedouin just yet ;)! 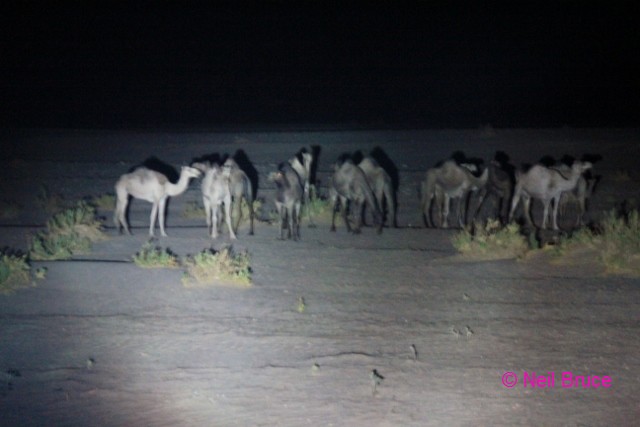 We picked a far more peaceful spot the next night, tucked in a gully in the Empty Quarter dunes.  There were no sounds, no light pollution, only peace and quiet and millions of stars. 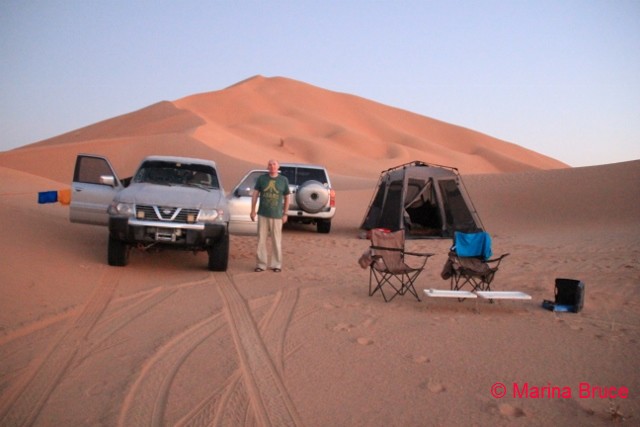 We clocked up an amazing 340kms offroad the next day, we had hoped to reach Al Ghaftain where there is a resthouse but our plans were thwarted by a long section of particularly tricky soft dunes.  There were plants everywhere but we managed to find an area where there weren’t too many.  This campspot shall forever be known as “camp camel spider” – there were heaps of the little blighters scurrying around, including one large (3″ across) specimen which took to lurking under my camping chair.  This is also the place we fixed our first puncture, and the spot we accidentally left our hi-lift jackboard, so if you can brave the beasties, there’s a prize for the first person to get there! Co-ordinates are N19 51.942 E54 49.782. 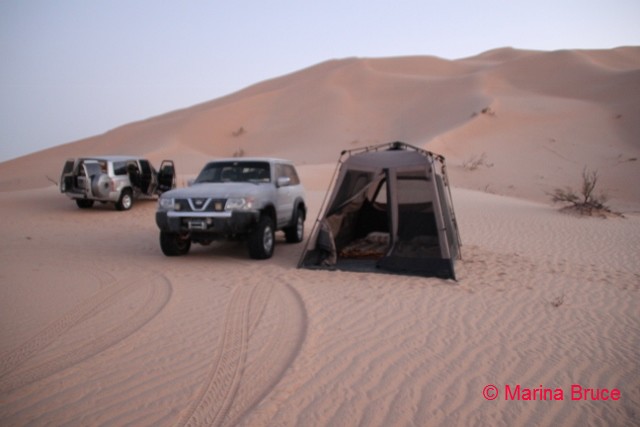 For our final night in the Empty Quarter we found a lovely spot on some red dunes, overlooking a white sabkha – this time we stopped driving about half an hour before the sun had set so we could enjoy the sunset. 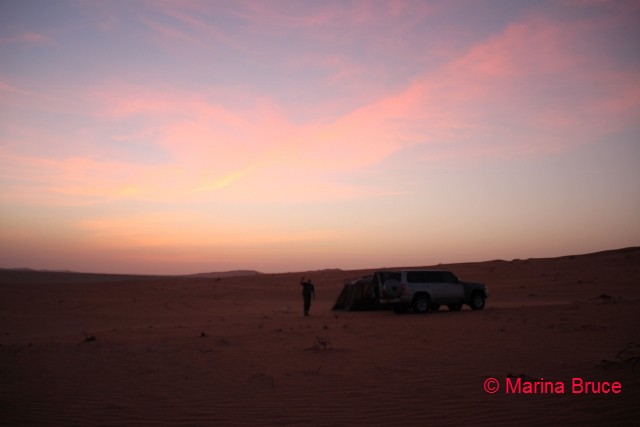 Next day we travelled northwards to Ibri covering 300kms “offroad” and 150kms on blacktop, all with a damaged rear wheel hub – but that’s a story for another day!