My regular readers will know that I am pretty ballsy but also that one thing utterly terrifies me – mountain roads.  Having recently spent 8 days following Mike Nott through the interior of Oman driving through wadis, plains and mountains I thought I had put that fear to bed and so I was quite pleased when our Omani host suggested we spend a day at Wadi Tiwi.  We had just had one of the most prolonged rainstorms to hit the UAE and Oman for some years so we shouldn’t have been surprised that the road was under water in places 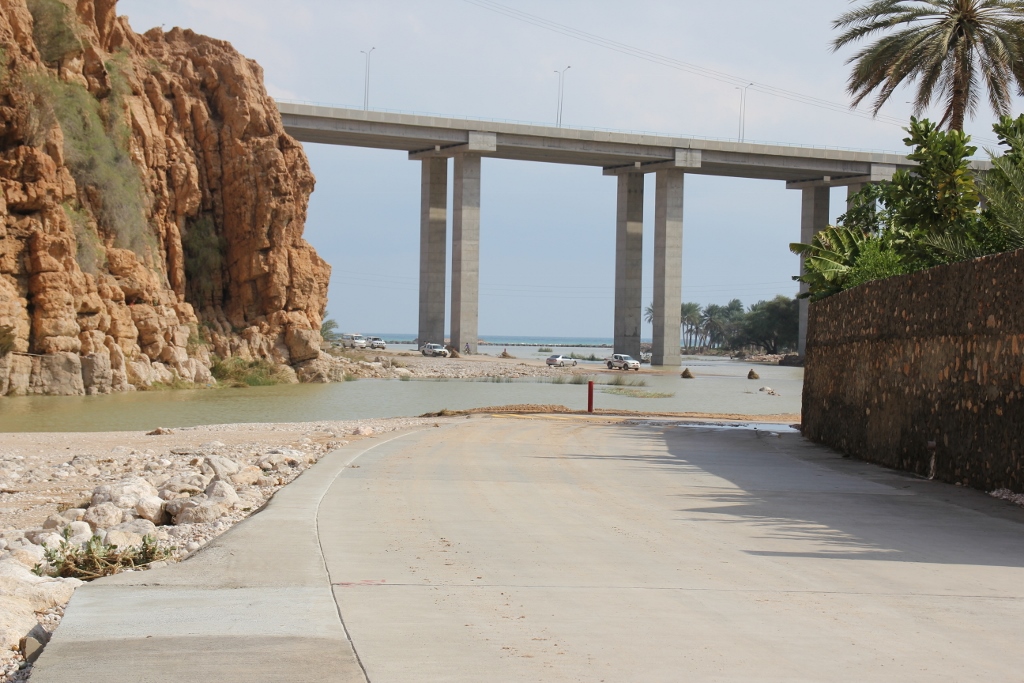 Lots of people, both tourists and workers, lingered by the sides of the water guiding the cars through, but for others daily life carried on as normal 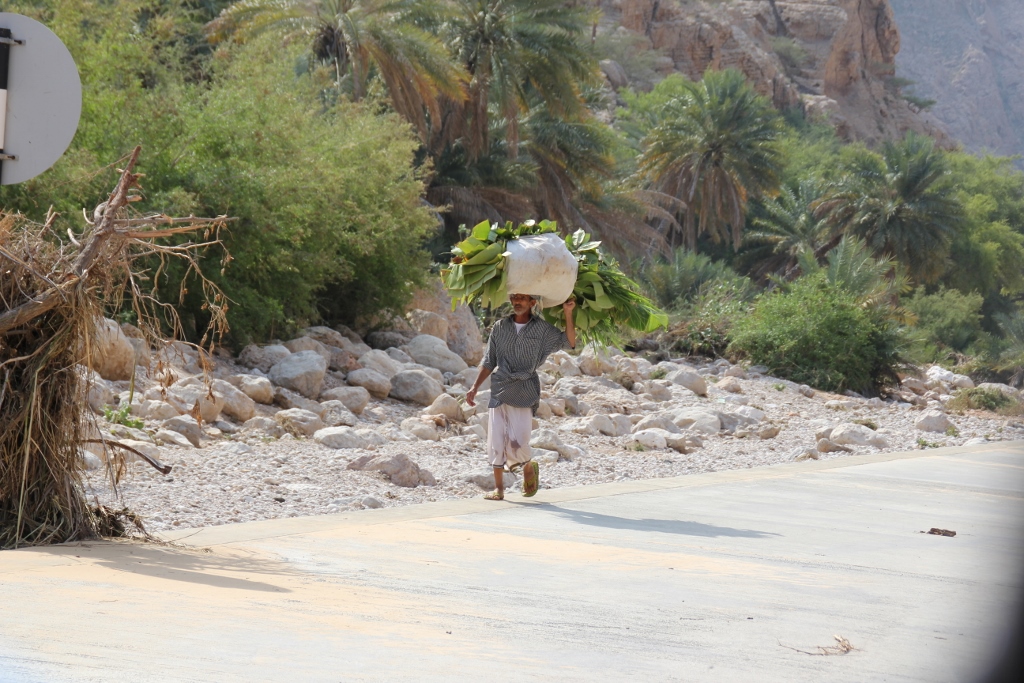 The wadi was very picturesque though it’s hard to imagine why someone would want to choose to live somewhere so difficult to access. 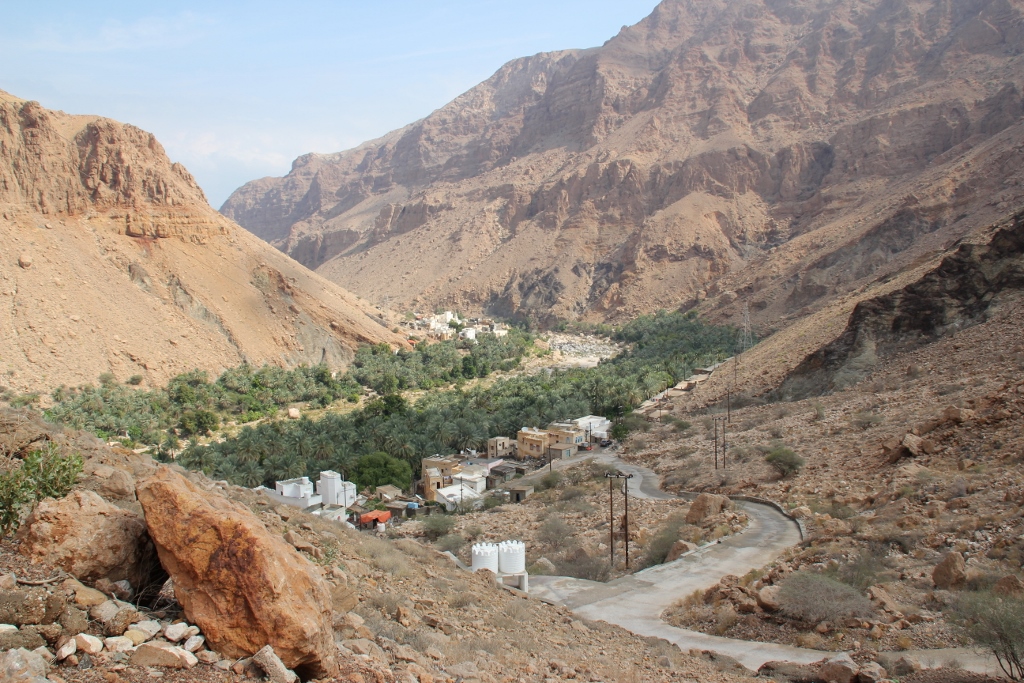 After the first village my Omani friend had decided that I was driving too slow and that I should be relieved of my driving duties…. just before we had to drive over this bit 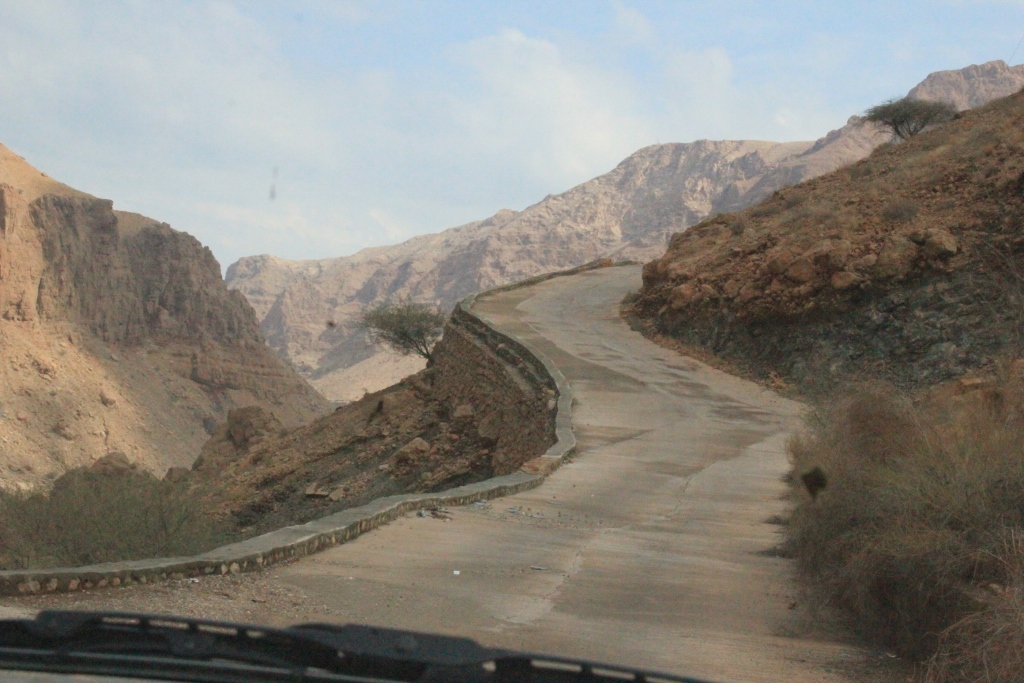 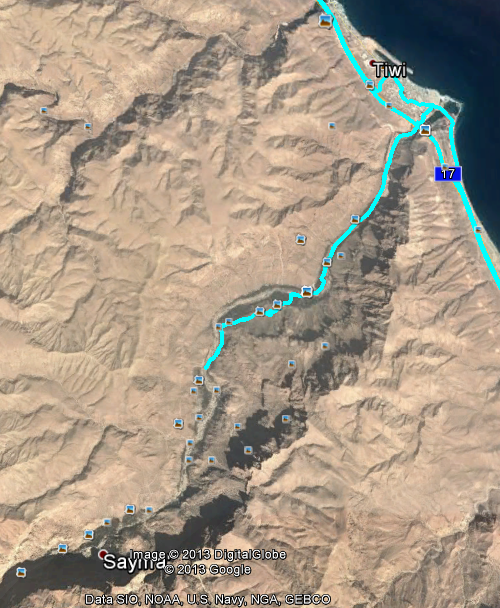 Wadis always look completely different on the return journey so we took our time, snapping away as we went 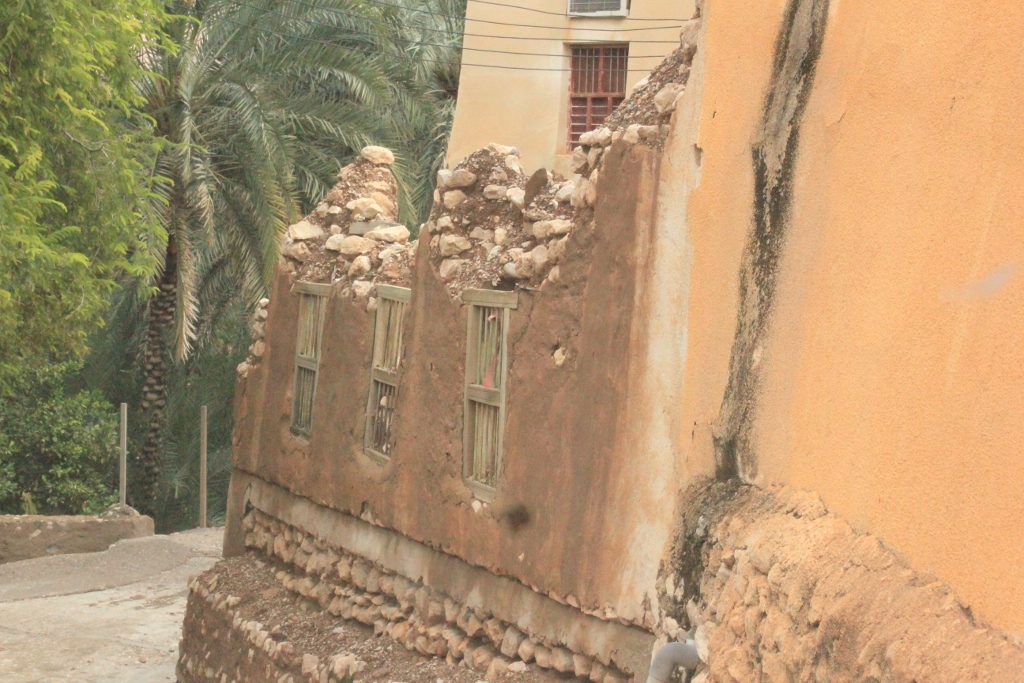 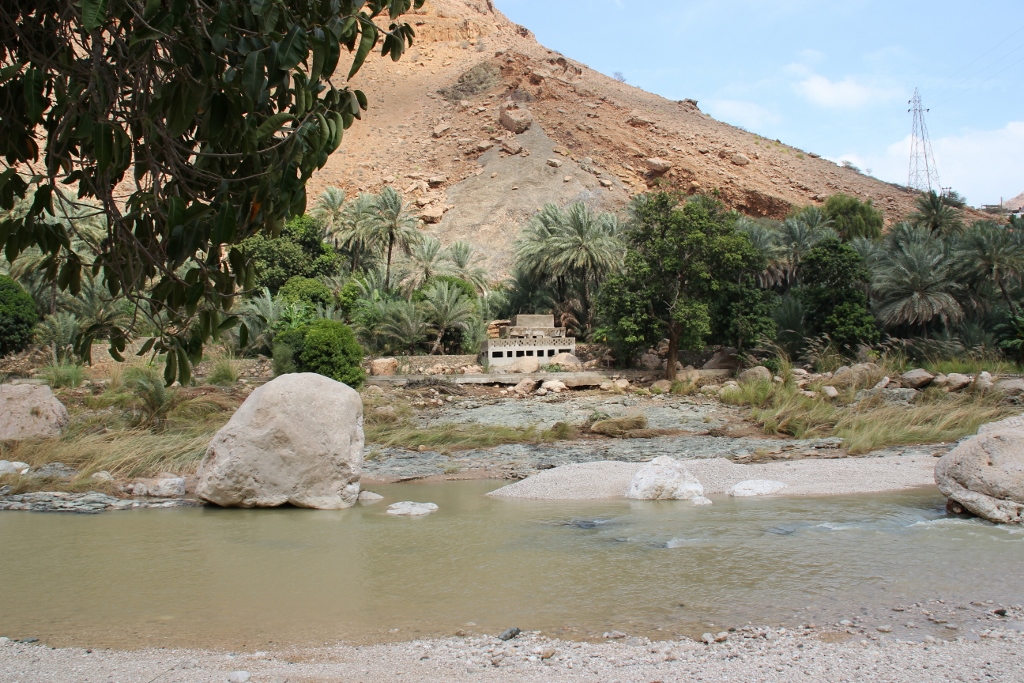 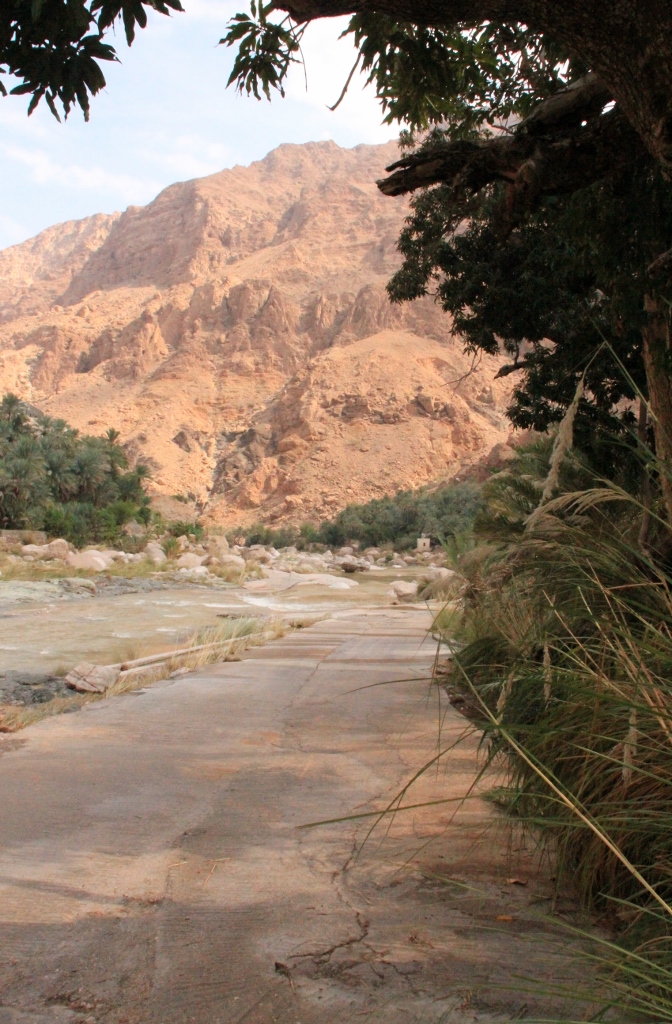 With a photostop to capture me crossing the wadi 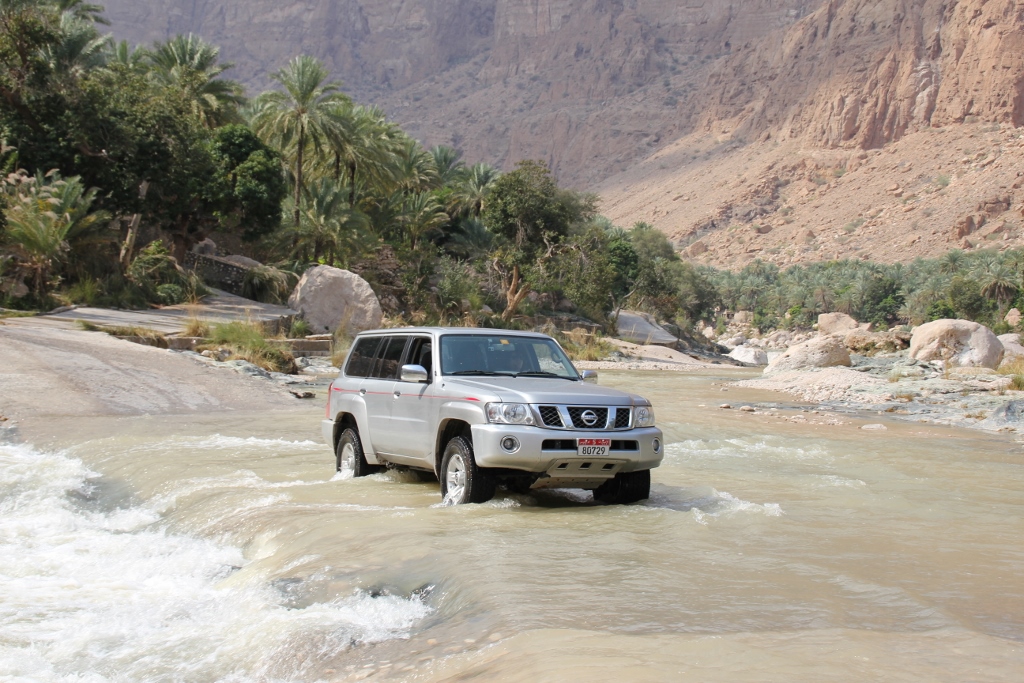 From my driving position the water seemed to be a lot higher than it was in this photo, I had been worried it might have been above the sidesteps (before I remembered I had taken them off and they were in our shed in Al Ain)!

Our jaunt up Wadi Tiwi was truly amazing, but the best bit was this –

A landcruiser pick up was stuck on a bank of small stones and I was first on the scene to pull him out.  They wanted to use their own lifting strap, which broke free as soon as I put strain on the rope, so then they tried (unsuccessfully) to pull the pickup from the back with a Landcruiser 4×4  and now it was stuck too!  I offered my ARB snatch strap and managed to pull the pickup, then the 4×4 out no problem at all.  Faris told me later that one of the drivers had said to him “why you let lady drive, she won’t be able to do this, you drive ” and his reply was “she strong woman, let her try” (and he didn’t even suggest to me that he should drive at this point – maybe he knew I would take this recovery in my stride or perhaps he had worked out that he would have a long walk back to Sur!)

So the scores for the day

Driver or even as a passenger on Mountain roads – epic fail!

If you want to learn more about the Wadi Tiwi route from someone who is not scared of heights, then check out my friend Paolo’s blog WeekendUAE.com.