Each year since 2008 Abu Dhabi Western Region Municipality has held a unique and very special festival dedicated to the ship of the desert. located just south of Madinat Zayed.  It’s held at the end of December which coincides with the winter break/Christmas and it’s well worth a visit if you have time.

This is the third time I’ve been and although the other two have been good, this was one was exceptional.  It’s a good 3 hour drive from Al Ain to get here so I ran a camping trip for Oasis Offroad combining some very easy offroading, camels and a night under the stars. We found a great spot to camp, about 8kms into the desert, set up our tents then headed to the Camel Festival to be in time for the Arabian Horse Race due to start at 3pm.  We knew we were in the right place when we saw this sign 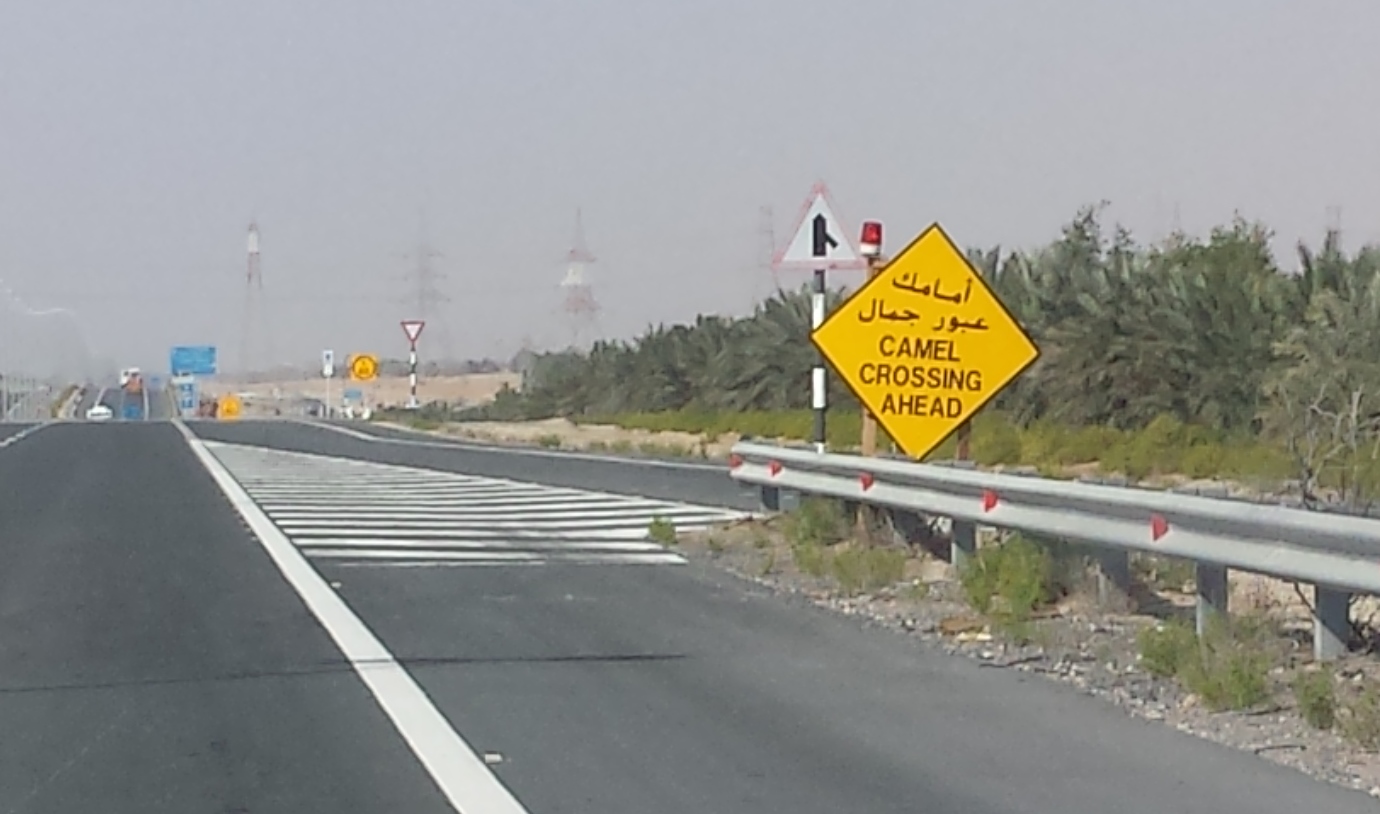 When we got to the advertised location there were a few expats milling around, but no sign of any action and it turned out that there definitely was an arabian horse race, just not at the festival track.  Some young Emirati men convoyed about 20 cars up to the actual location which was in the north of Madinat Zayed and once there a local gentlemen invited us to follow him to “a good spot to watch” and we had a grand view of the action while we enjoyed his hospitality – a truck came up with plastic chairs, water and fruit juice, all of which were very welcome. 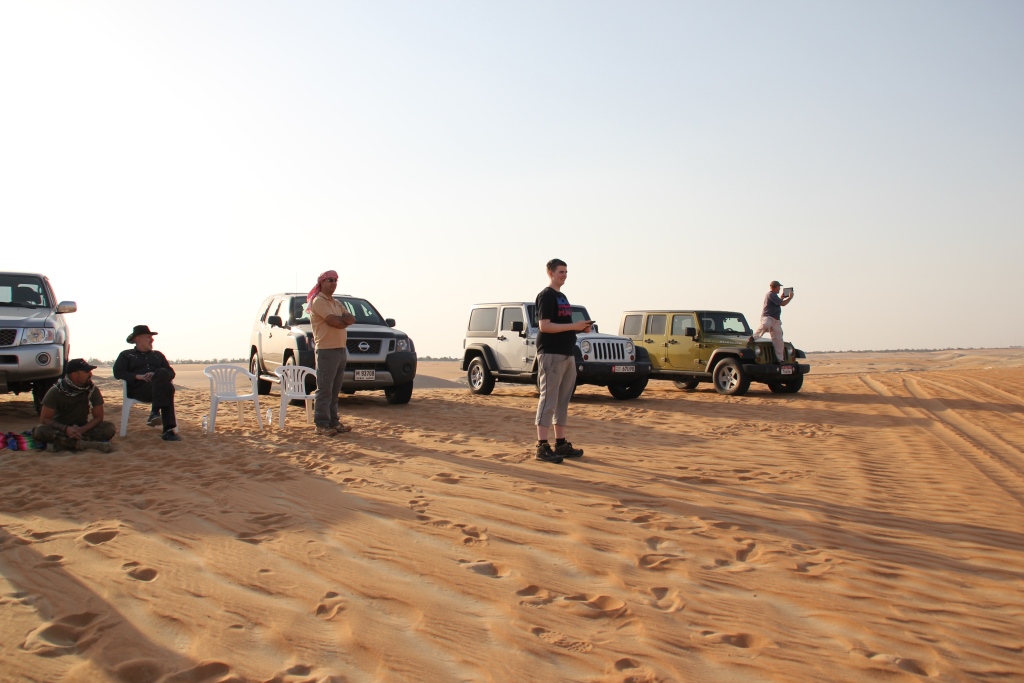 There were three races and the travelling entourage of trainers, tv cameras and support crew kept our interest while we the horse assembled on the start line. 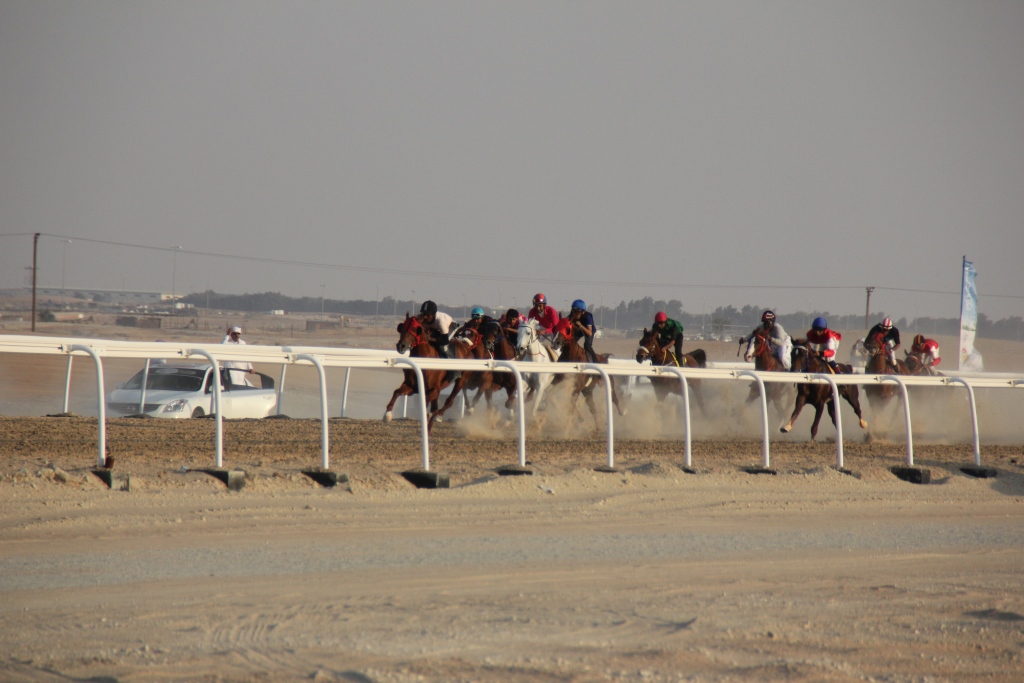 It wasn’t possible to get right up to the rails during the race as there were around 20 vehicles driving alongside the track, but once over, when the horses returned slowly to the start we had the chance for a close look and to grab some great photos 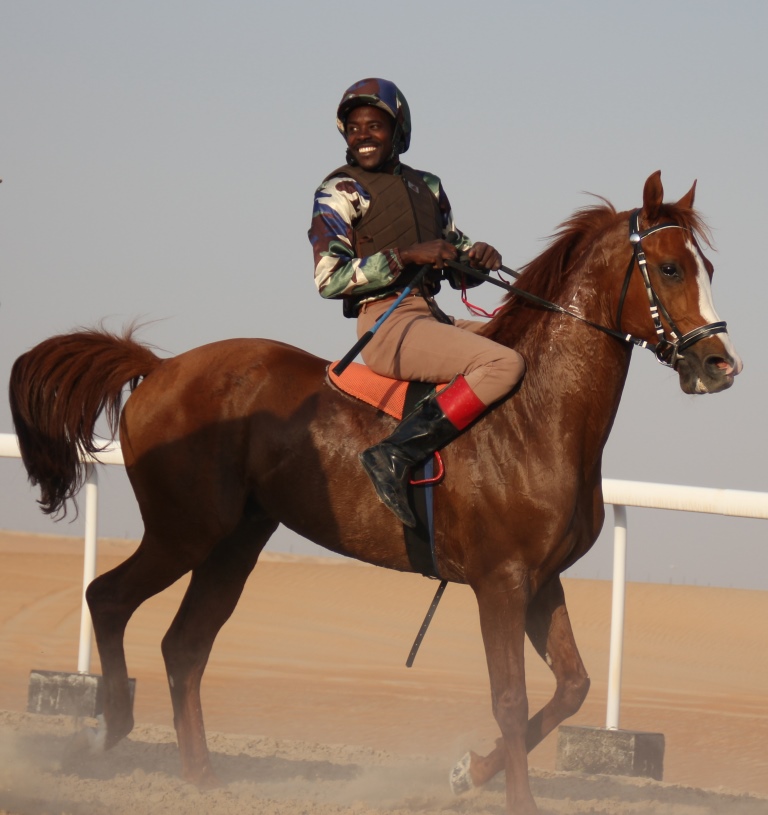 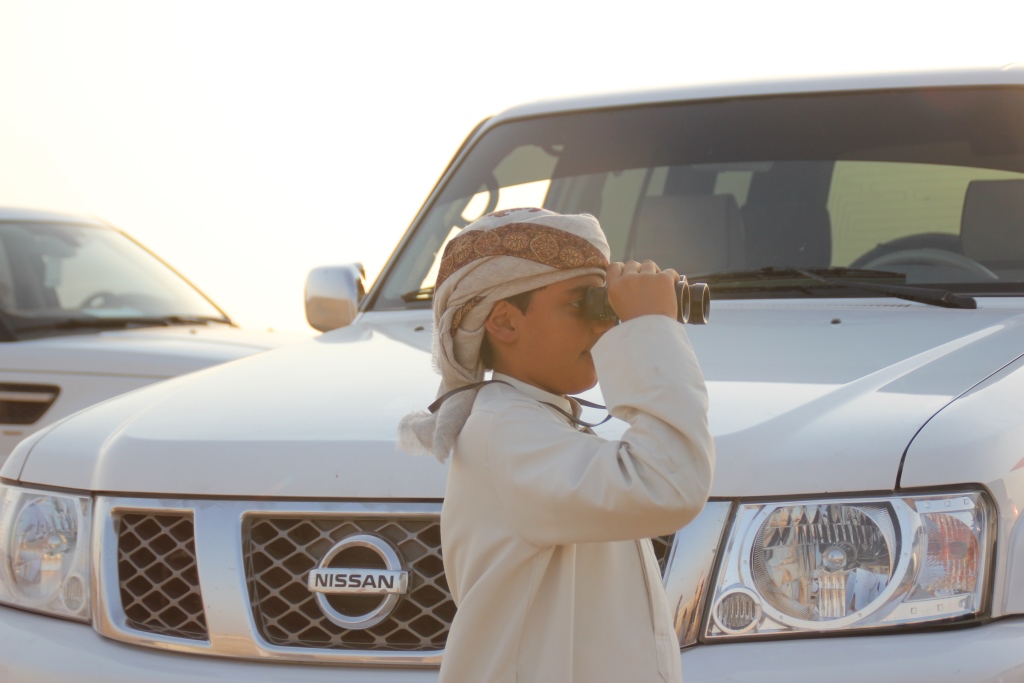 Sadly, the last race of the day saw a few riders fall from their horses – all the horses got up and ran away but 3 riders were taken to hospital by ambulance, I do hope they all make a quick recovery. 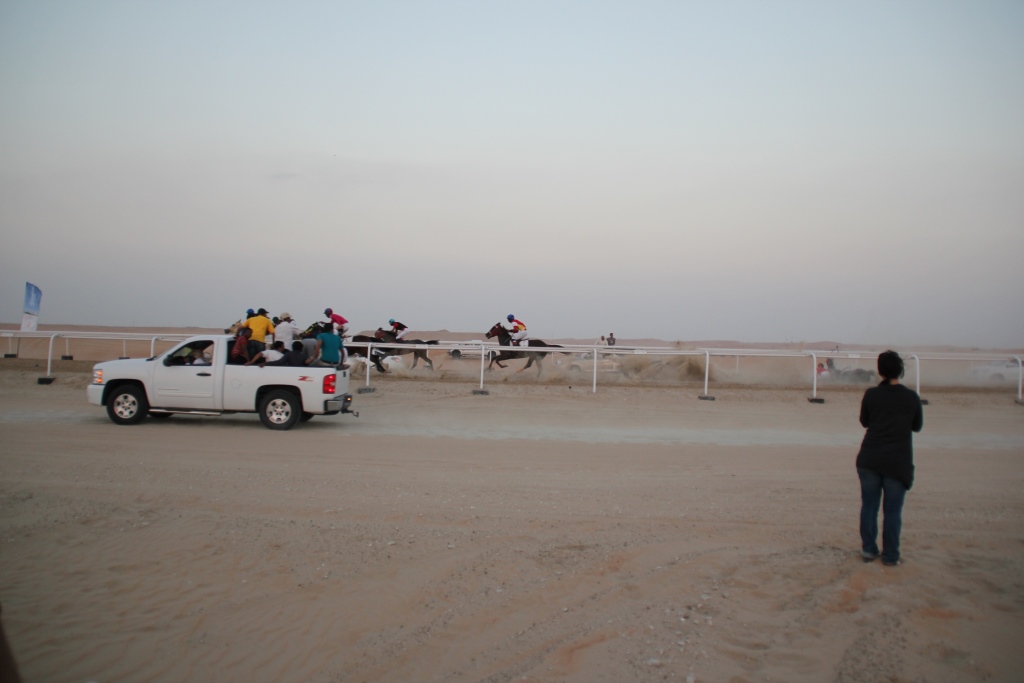 With the sun having dipped below the horizon we went back to our campsite where we had a great campfire and bbq.  Oasis Offroad is comprised of expats (which make up about 90% of the UAE population) and always has an eclectic mix of nationalities on our drives, but this time with the help of a couple of visitors we surpassed ourselves – we had attendees from USA, Bolivia, Germany, France, Italy, China and of course Scotland! Despite its remote location, our campsite wasn’t as quiet as I had hoped –  at 1am about a dozen local cars came along the gatch, some making a terrible racket.  Then about 3am, a shamal wind blew in from the north and we were engulfed in a sandstorm.  All the tents were still there in the morning, thankfully! 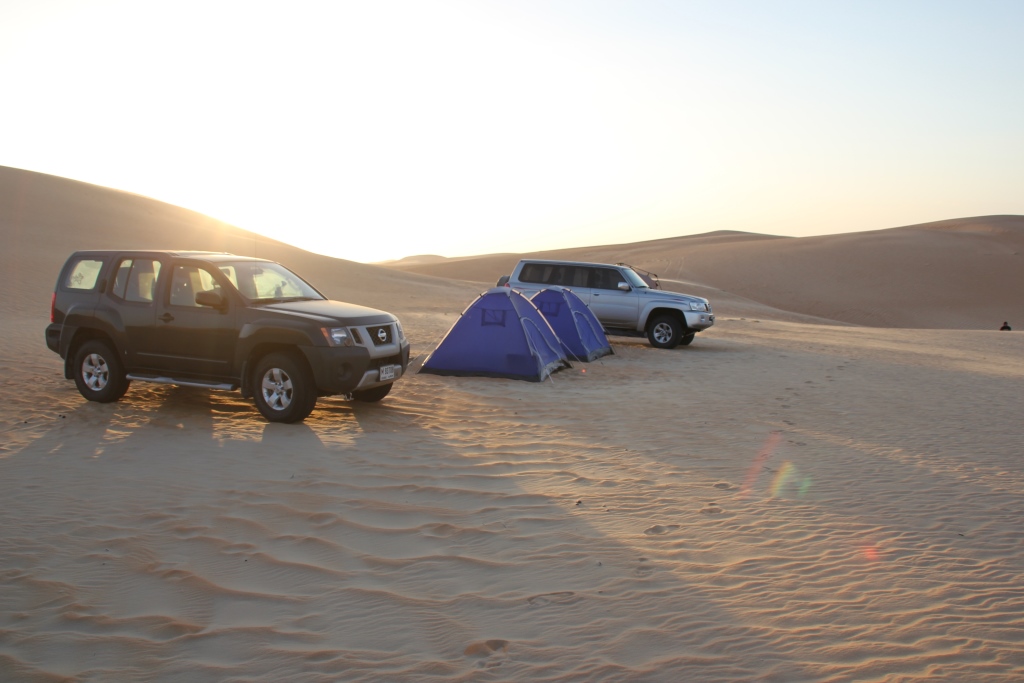 Once packed up we headed down a new gatch – having driven on the part-built road back in July and August, I wanted to see where it finished up.  We saw our first camels close up and stopped for photos; the orange truck on the photo had stopped to let us past only 300 metres prior and once more we were behind him, though thankfully he let us past again.  Next stop was an old Landcruiser FJ40 wreck in a bowl. 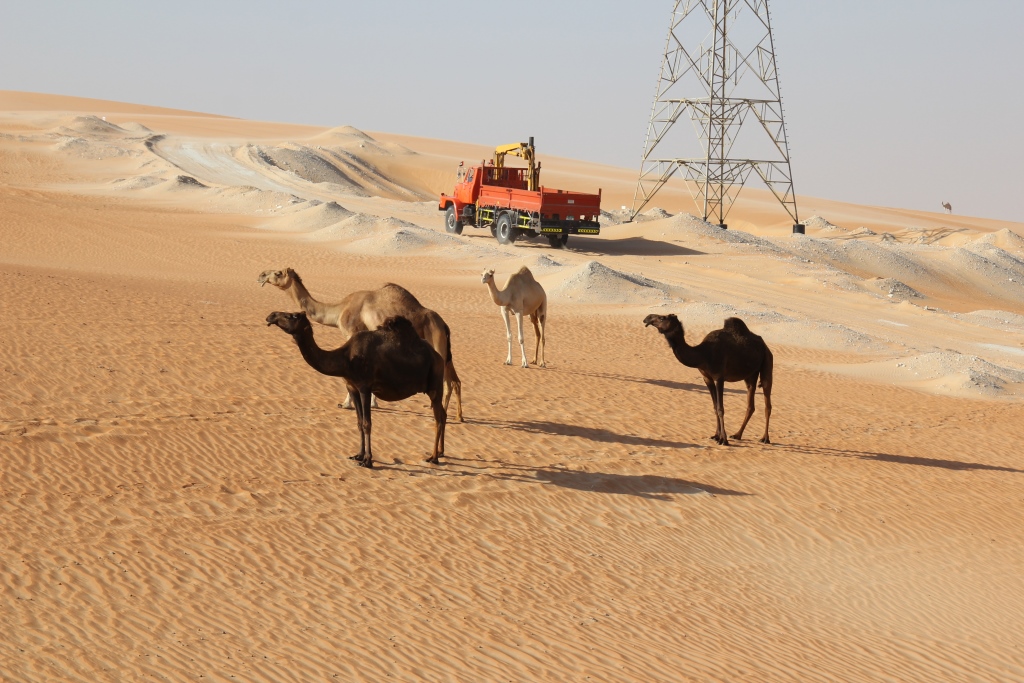 Our orange truck must have passed us when we were out of sight  in a bowl taking pictures of the truck wreck so I wonder if he was surprised to see me in his rear view mirror once more.  He let us past again, smiling but I did wonder if he was muttering “damned offroaders” under his breath.   The final stop was for a photoshoot with my favourite digger, and yes, our friend in the orange truck sailed by once more – luckily for him he was almost at his destination and we were “at the end of the road” with no option but to turn back and retrace our steps.

On our return journey Cam took this fabulous camel photo.  This was their response when we asked them to turn round and smile for the camera – maybe they had been talking to the orange truck driver….. 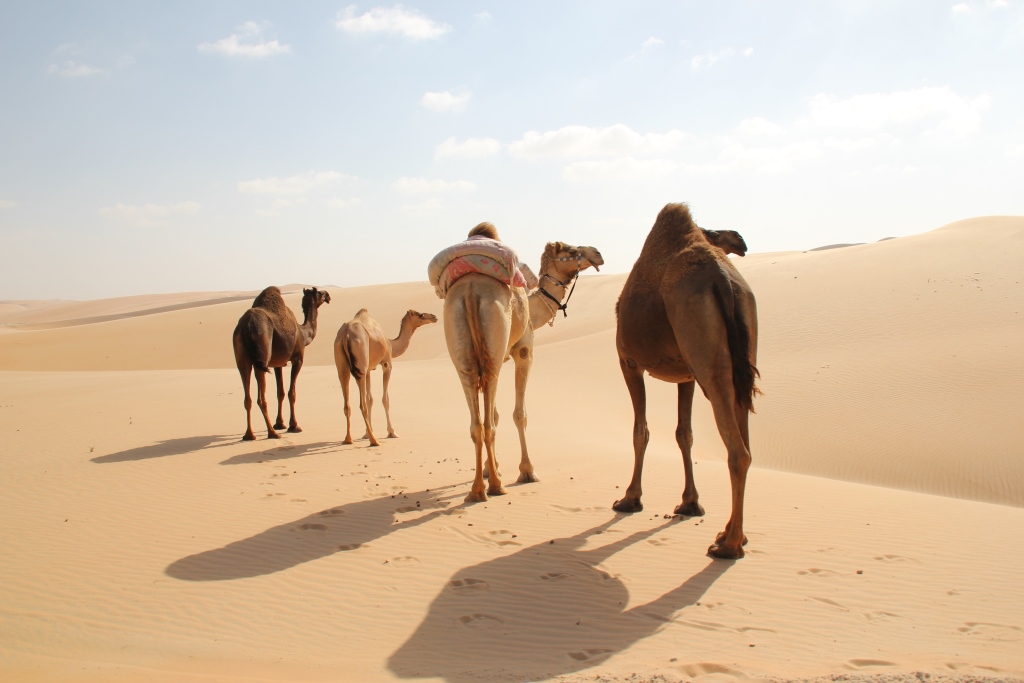 We had some time to meander a little bit into the sand dunes, which were amazingly wet and firm, so much so that we were driving at 26-28psi, including Oasis Offroad’s newest member, Renaud, who was a sand rookie before this weekend! 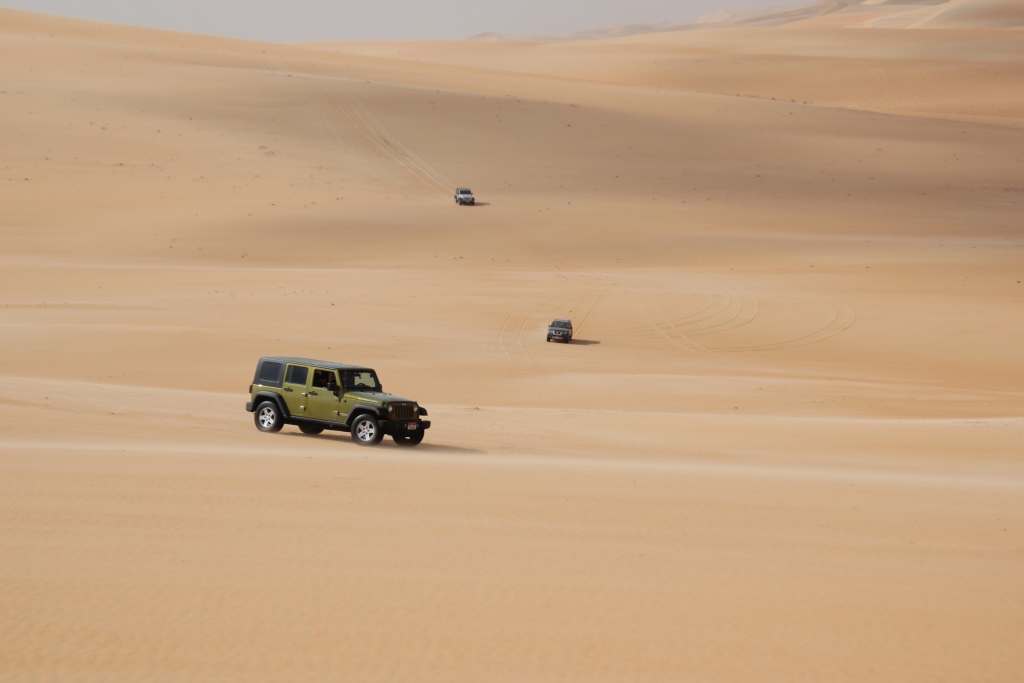 All too soon we were back on the blacktop, but we had a saluki race to go to at 12 noon.  Except it was delayed for three hours, so instead we visited the souq areas.  How about some lovely colourful tassels for your camel? 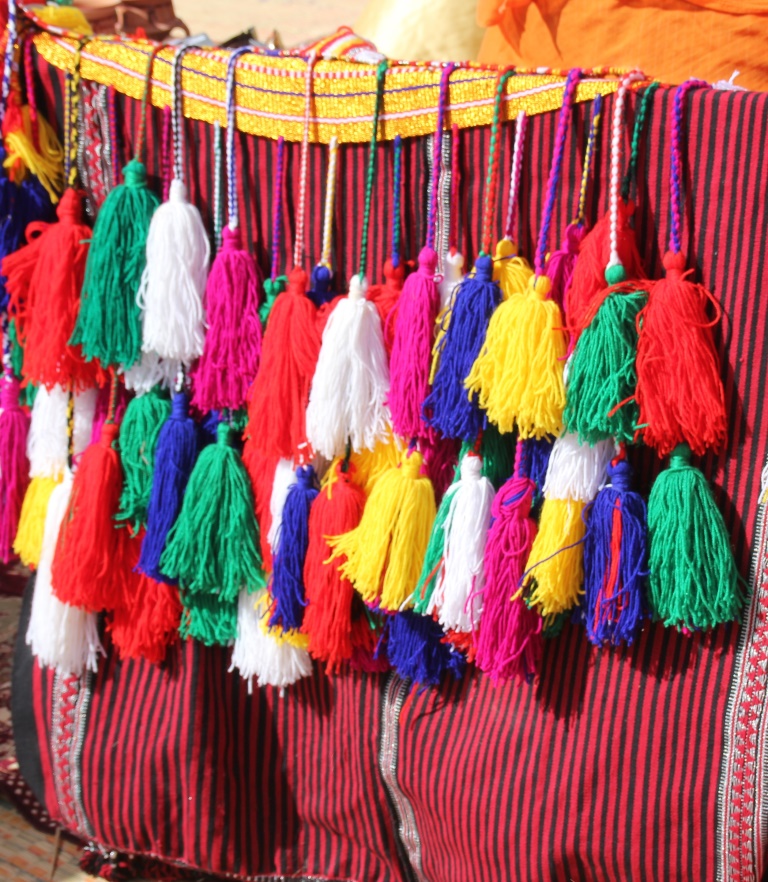 If I had a camel, I would be buying her some nice bling…. 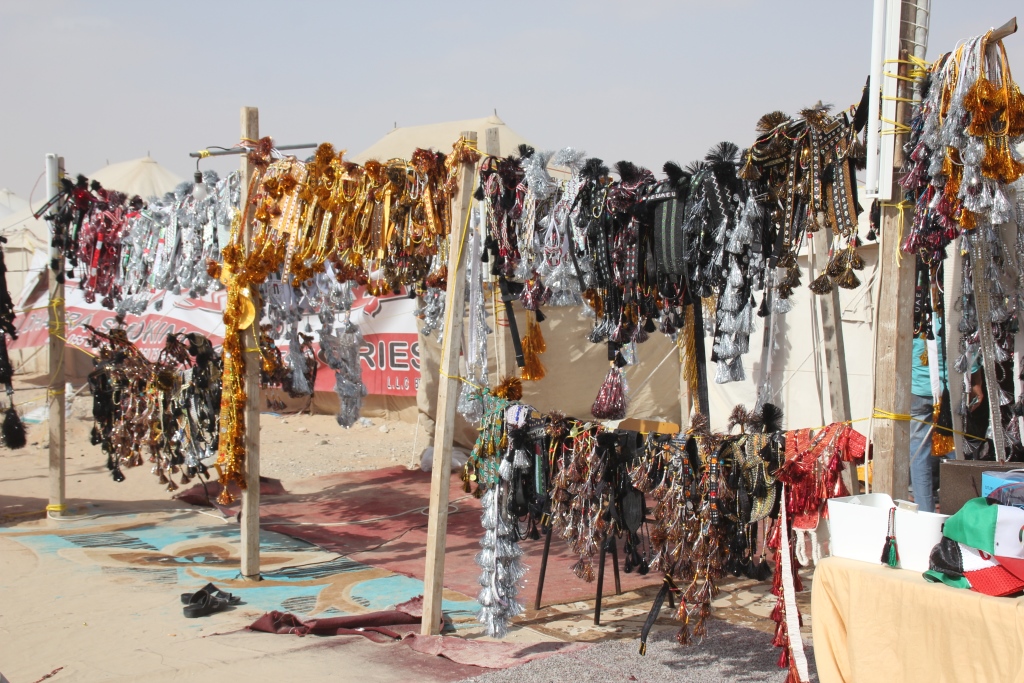 Next stop was the camel arena, some 5kms from the souq/racetrack areas.  To get the most out of this festival you need to have access to a car to drive between the sites, which are well signposted.  Just keep a lookout for camels crossing!

The UAE is the only country in the world to hold camel beauty contest; the very mention of beauty contest will have many of you conjuring up visions of  bikinis and evening dresses.  But no, the screenshot below lists the criteria for those judging the beauty of the Asayel, or brown/beige camel. (The Majahim, or black Saudi camel, have mainly the same criteria except under general shape and fitness points are awarded for “beauty display”, “length of the lip” “size of the mount” as well as physical health and hair shininess) 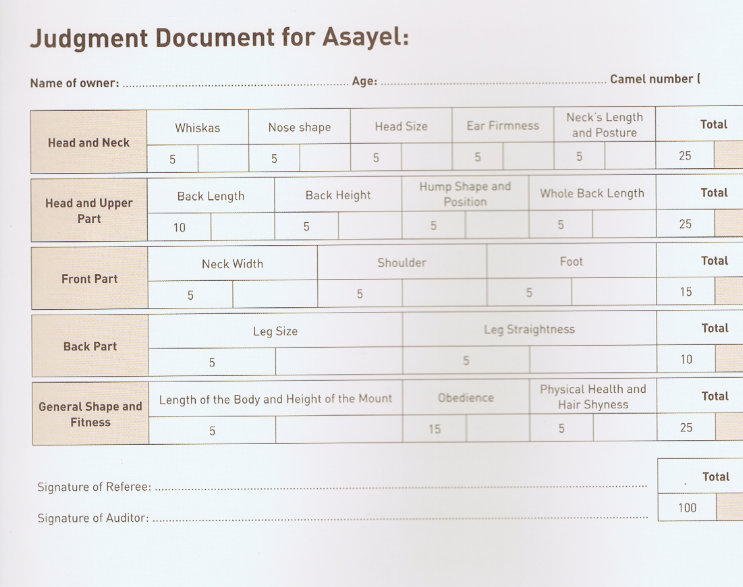 So now you know!  The most beautiful camels win large cash prizes or luxury cars, and when the winners are announced there is much rejoicing.  It’s traditional to anoint the heads of the  winners with a liquid made from saffron and water, a process just as messy as “blackening” the bride and groom before their wedding in Scotland! Being down in the arena while this was happening, with the melee of cameras, press, owners and contests was one of the highlights of my weekend. 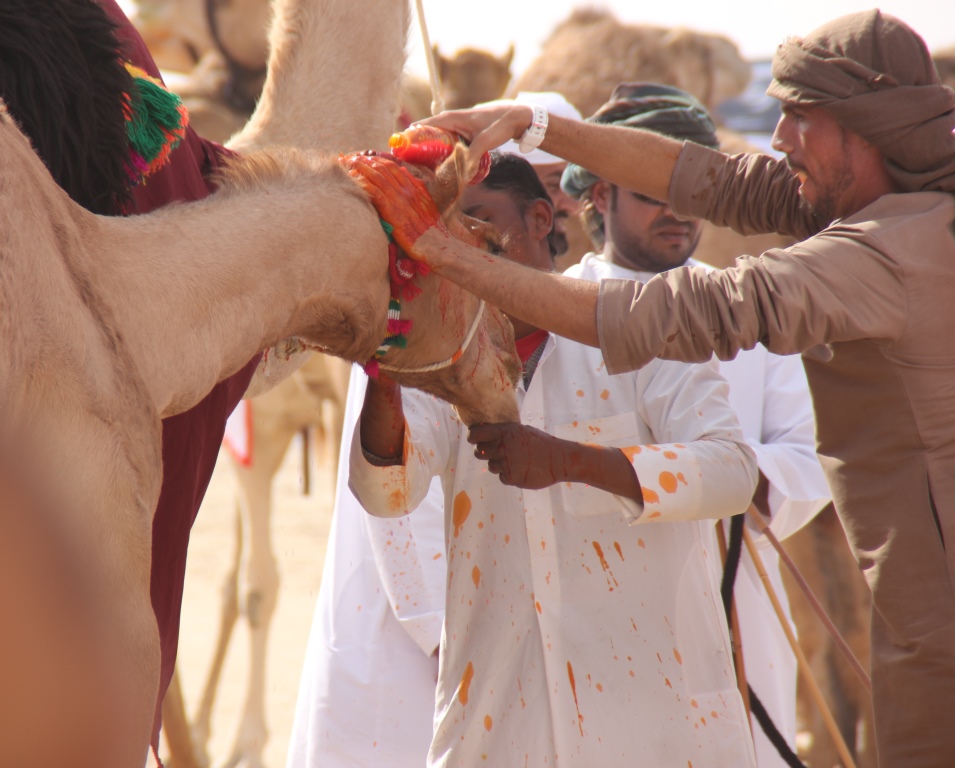 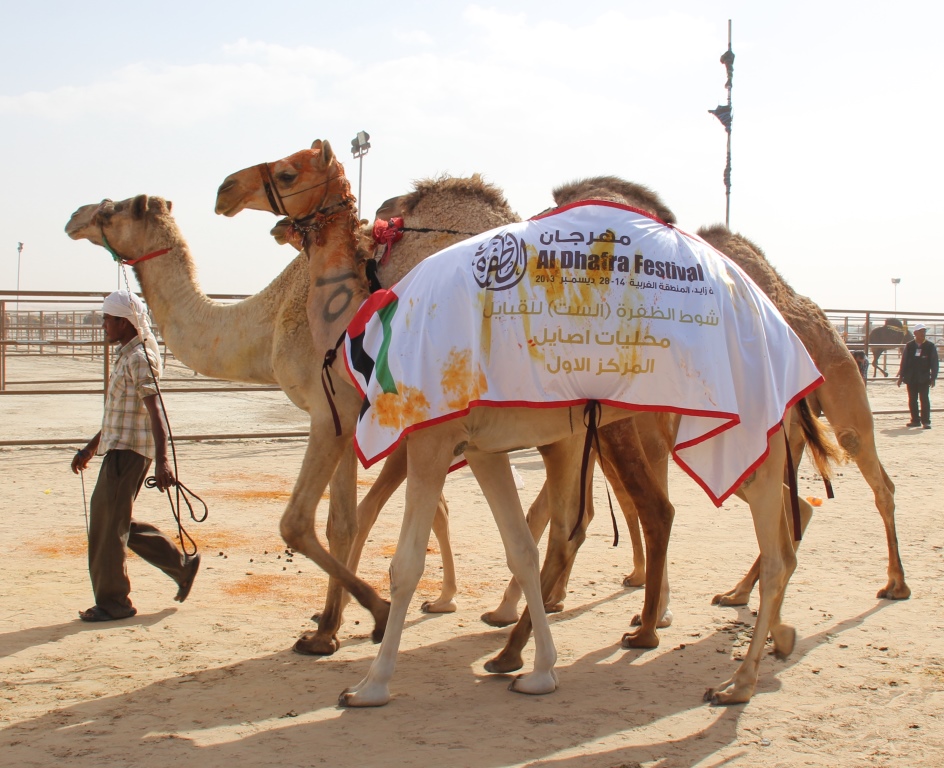 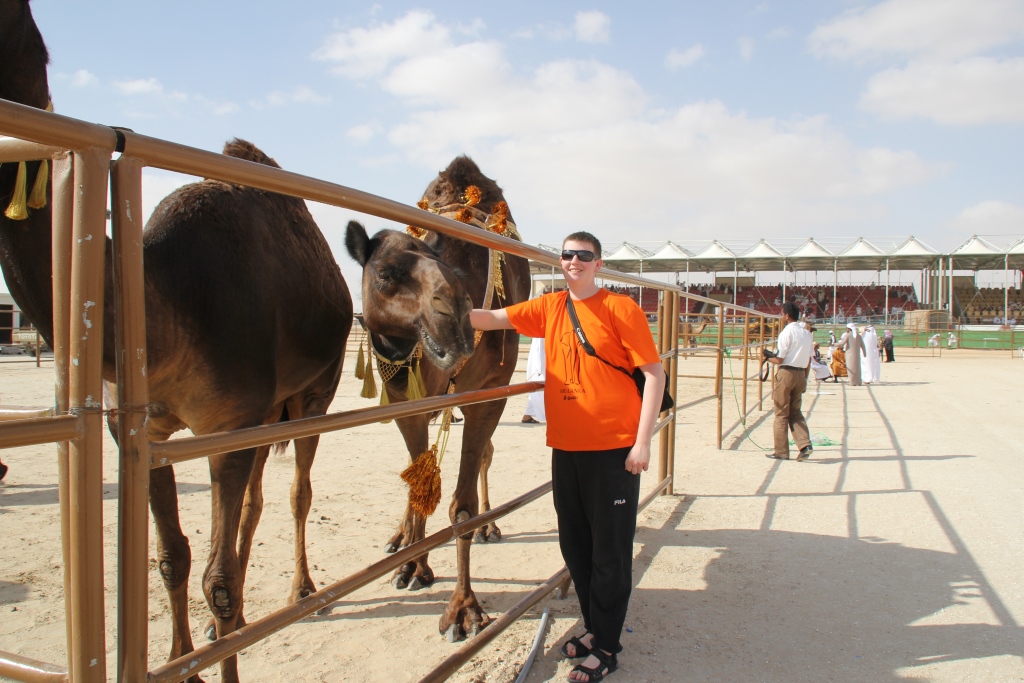