Quite a lot over the last three months actually – mostly just boring run of the mill trips which you wouldn’t find interesting (believe that if you will), however last weekend we had a pretty special trip which will possibly be the last big camping outing of the “season” for Oasis Offroad.

We drove down from Al Ain via the Mafroodah-White Sands gatch where I almost hit a gazelle, which chose it’s moment to run out in front of me.  It must have Scottish relatives because that sort of thing happens at home all the time!  Having fuelled up the cars at Himeem and bought a great curry out from the Al Anas restaurant just along the road, we found a great campspot far enough away from roads to be quiet but easily accessible in the dark as some of the group were arriving late evening.

Next morning we had visitors…. right through the middle of the campsite 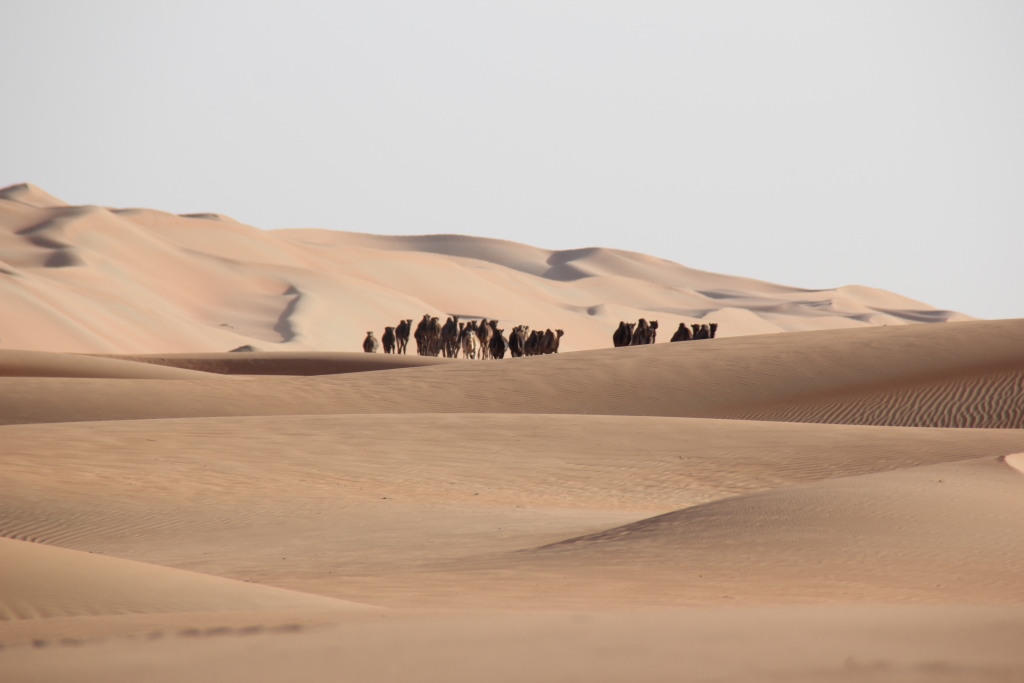 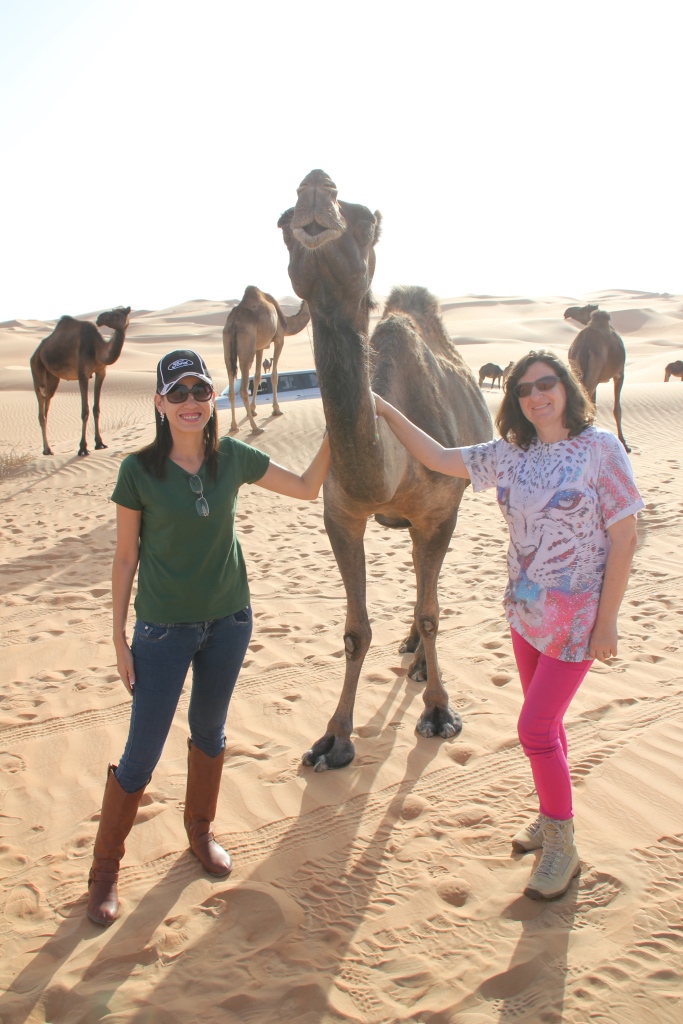 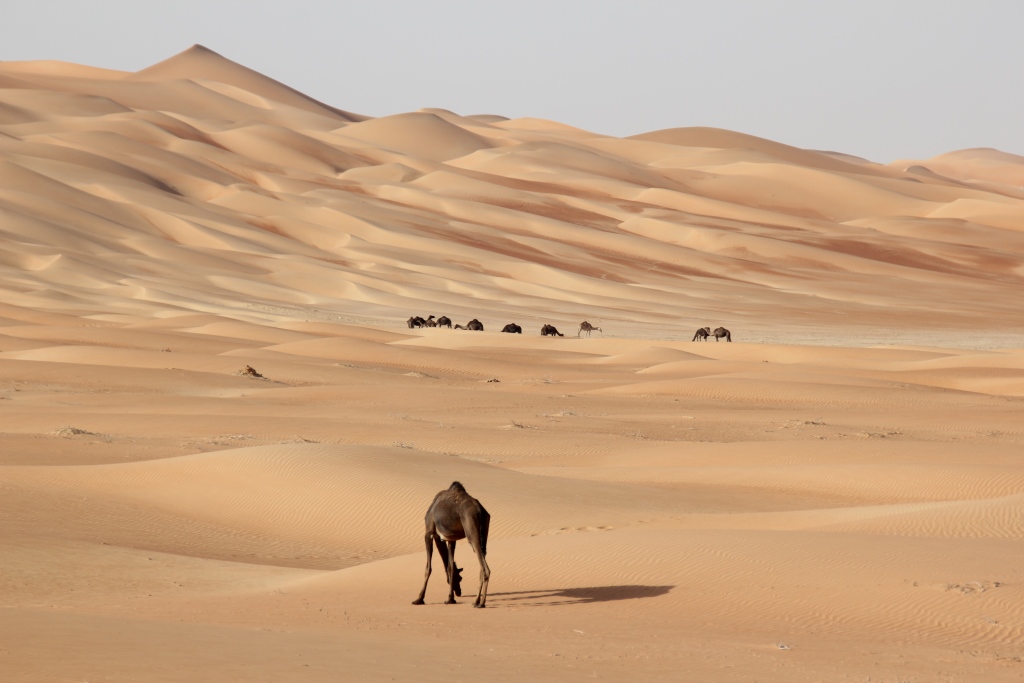 Once we collected our full compliment of 9 cars we headed north through some technical dunes and over a sandtrack, until we found a lawn in the desert.  Yes really, and it had solar lights down one edge too! 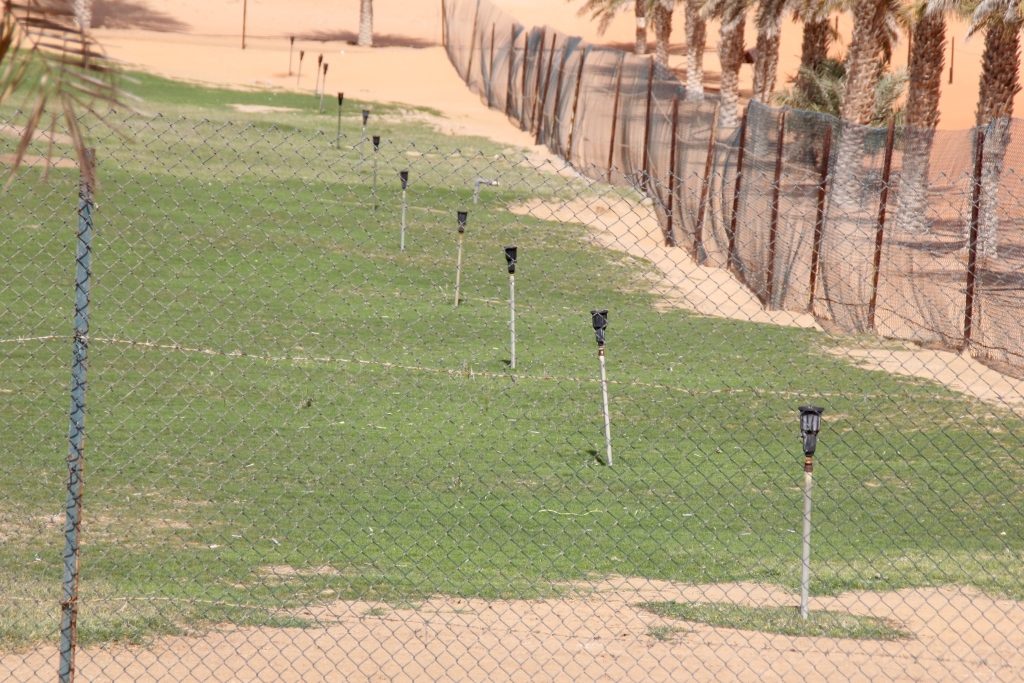 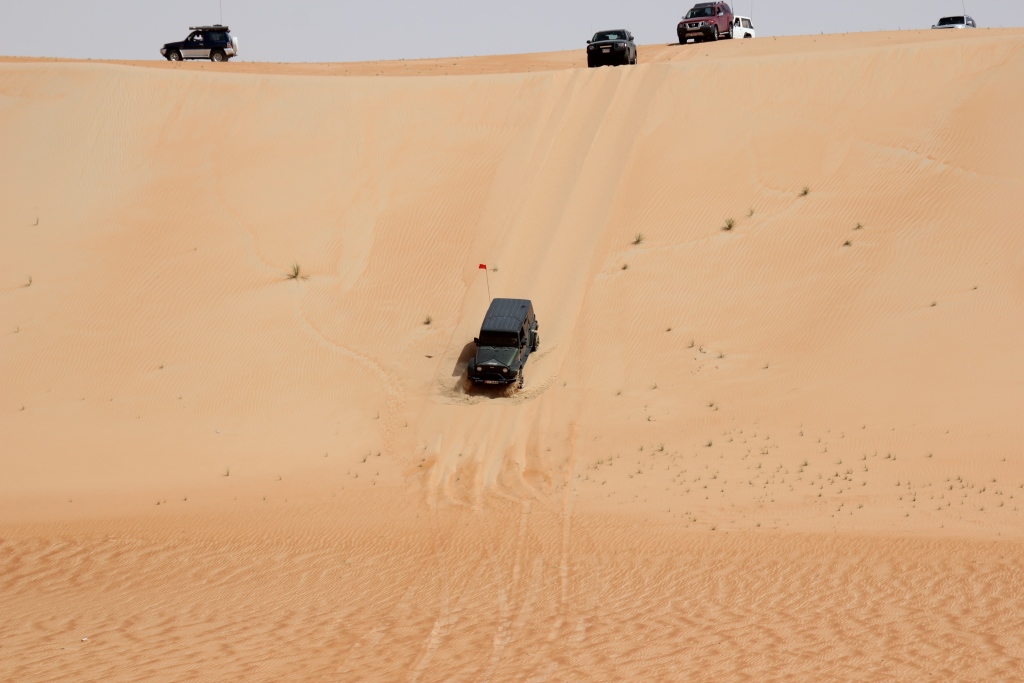 as well as more gazelle 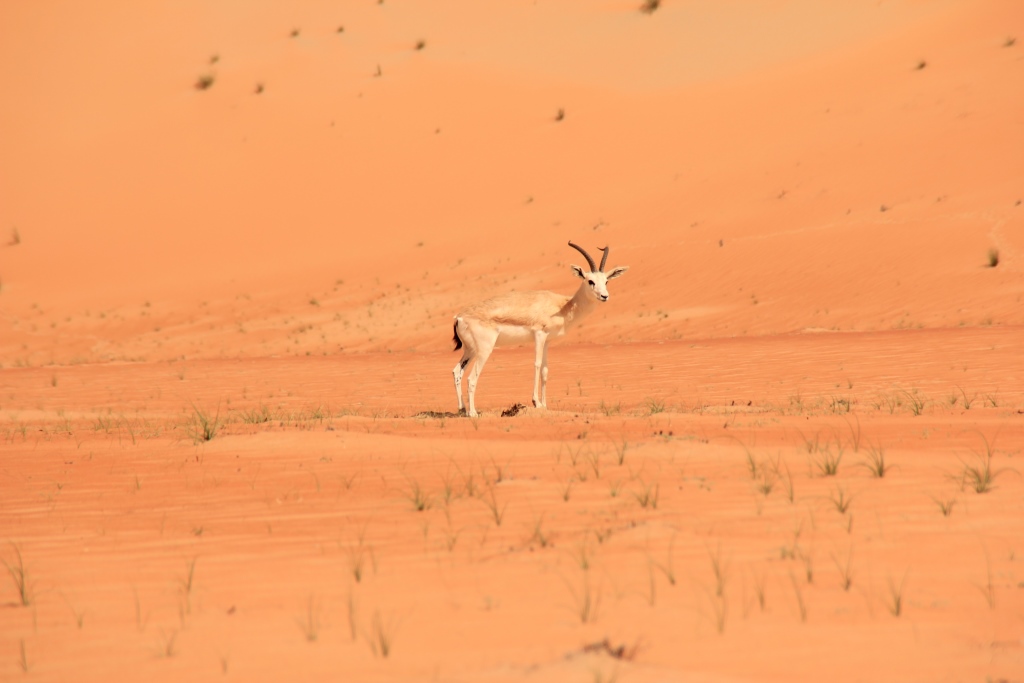 and camels too, including some babies 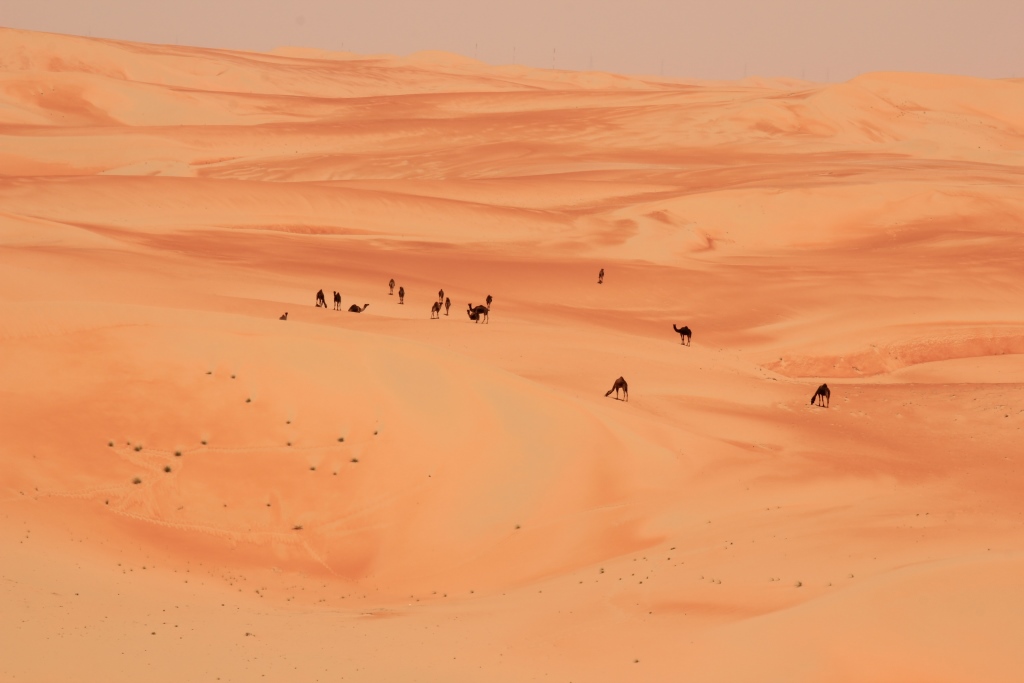 We’d just got to the part of the route which has three lovely big slipfaces together and the intention was to go round in a circle and tackle them a few times.  However on the first run through we disturbed a  gazelle with her very young calf, the Mum ran off and the calf went in the other direction.  Clearly the best thing to do was to get out of the immediate area sharpish in the hope they would be reunited. 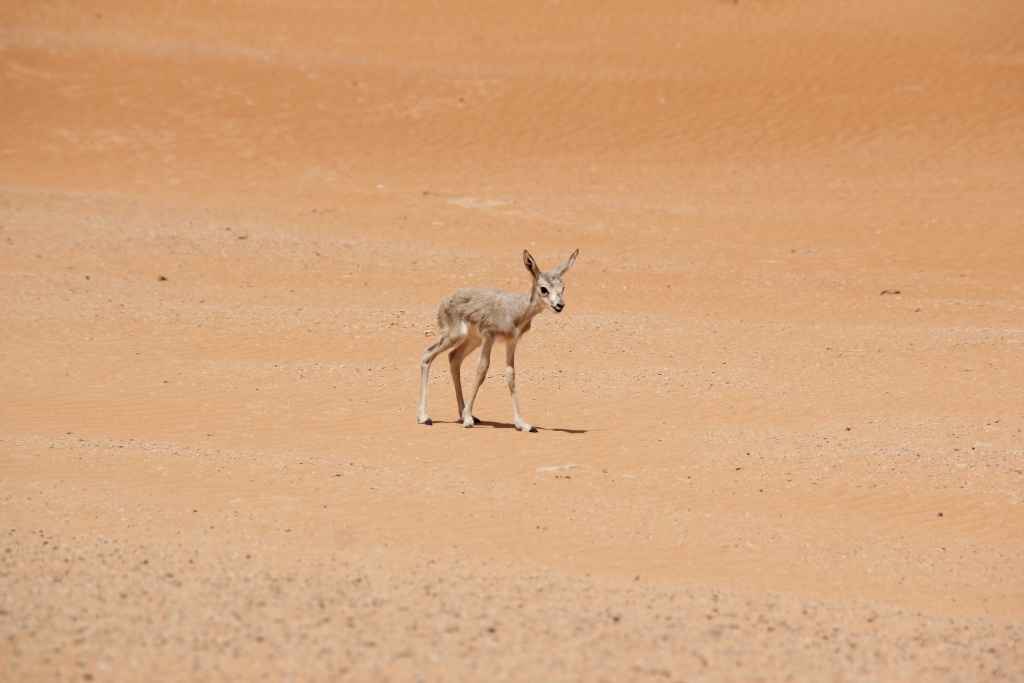 Onwards to lunch them – you might often hear me talking about tree valley – here’s here one tree bowl! 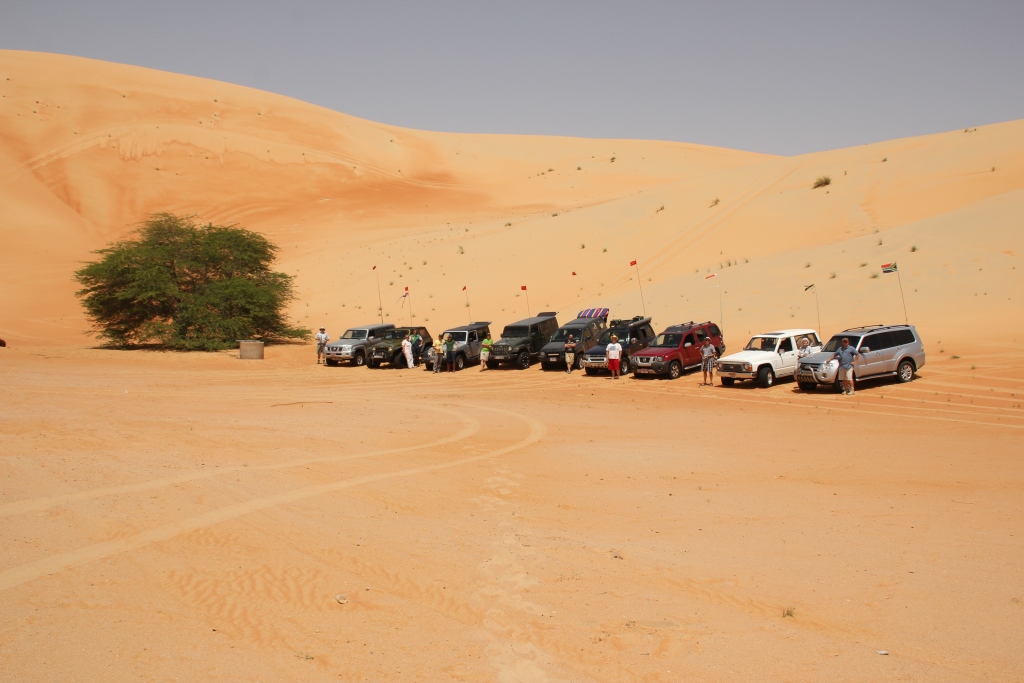 After a short drive we hit the main road and headed to Mizaira’a (now also known as Liwa City) where we stocked up with petrol and food before driving in the direction of Tal Moreeb.  It was while we were deflating our tyres that two other vehicles stopped and asked if they could join us, so we tacked Steve and Jeff onto the back of the convoy and away we went.

Very soon the inevitable happened – a 2.7tonne LWB Ford Raptor, fully loaded (with 3 passengers, camping gear, firewood and hop beverage), piloted by a relatively new sand dune driver  is bound to get crested.  Mike to the rescue while his lovely wife Debs took this great photo. 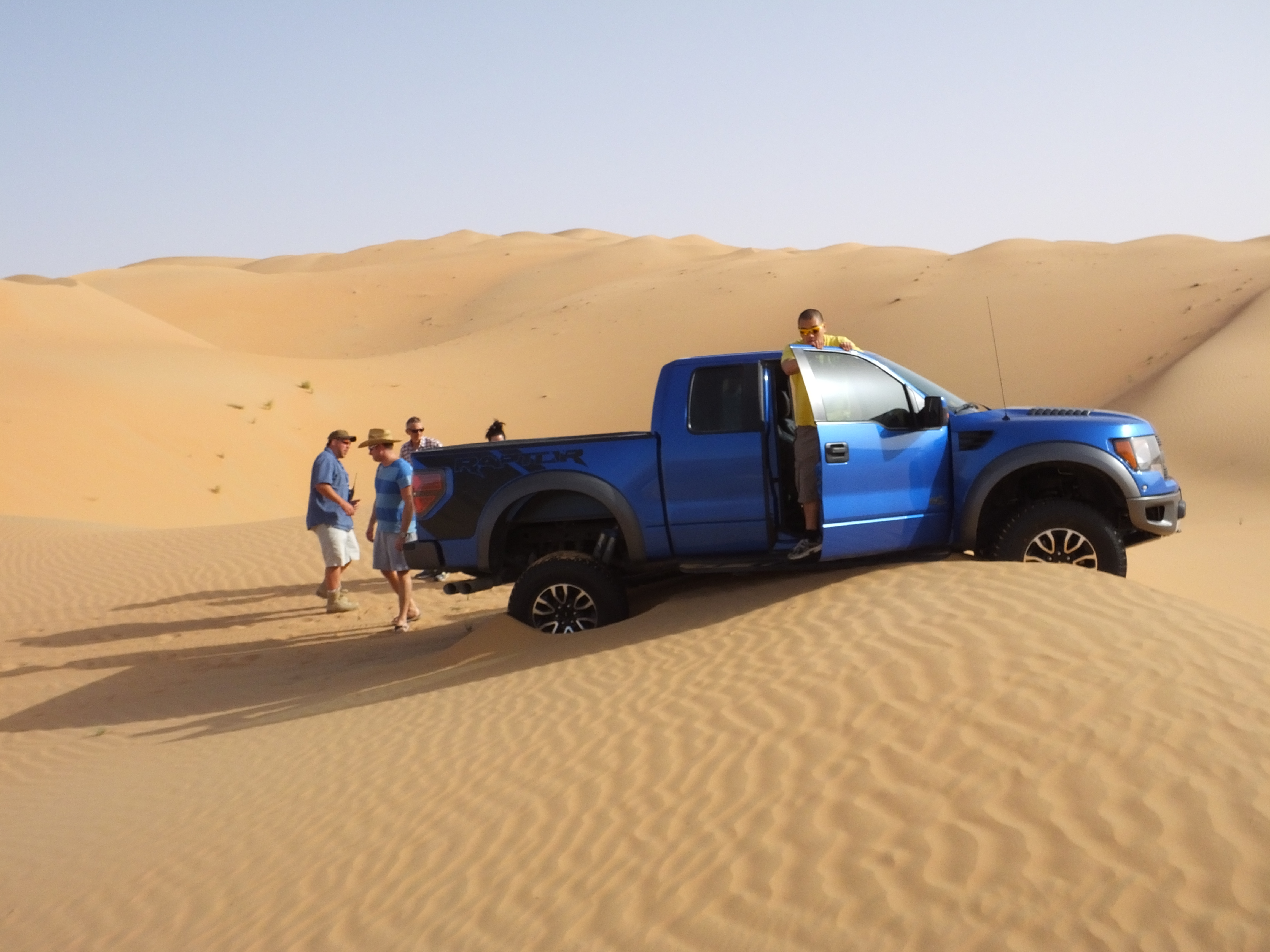 The purpose of the second leg of the trip was to recce a way deep into the Liwa Crescent, keeping well clear of oilfields, yet a route easy enough to be tackled by a goup with only 4-5 offroad drives experience.  We managed to forge our way 24kms in off the road.to find the most perfect  campspot ever – I think this is definitely one for my book! 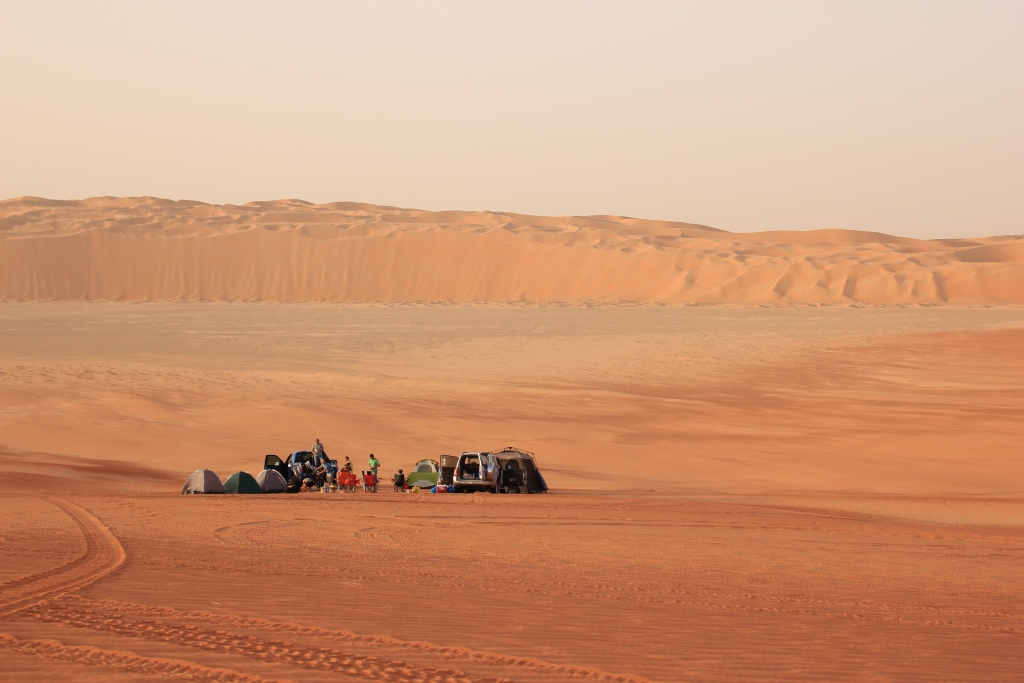 We had a great campfire and our new friends – all 9 of them – joined us and we chatted late into the night, while watching the most beautiful celestial show on a wonderfully clear night. We also made plans to decant Steve and Jeff’s passengers the next day to lighten their loads a bit and make the drive more pleasurable for them – many people get travel sick when sitting in the back of a car when dune bashing, 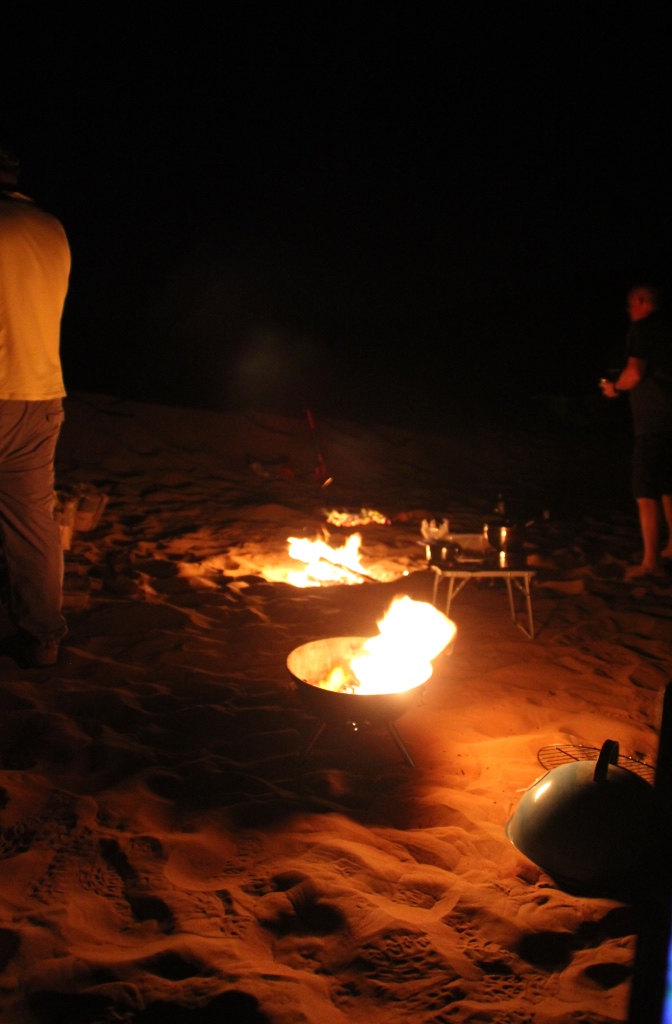 Now I know a lot about the desert but I didn’t know that you got ladybirds (ladybugs) there! 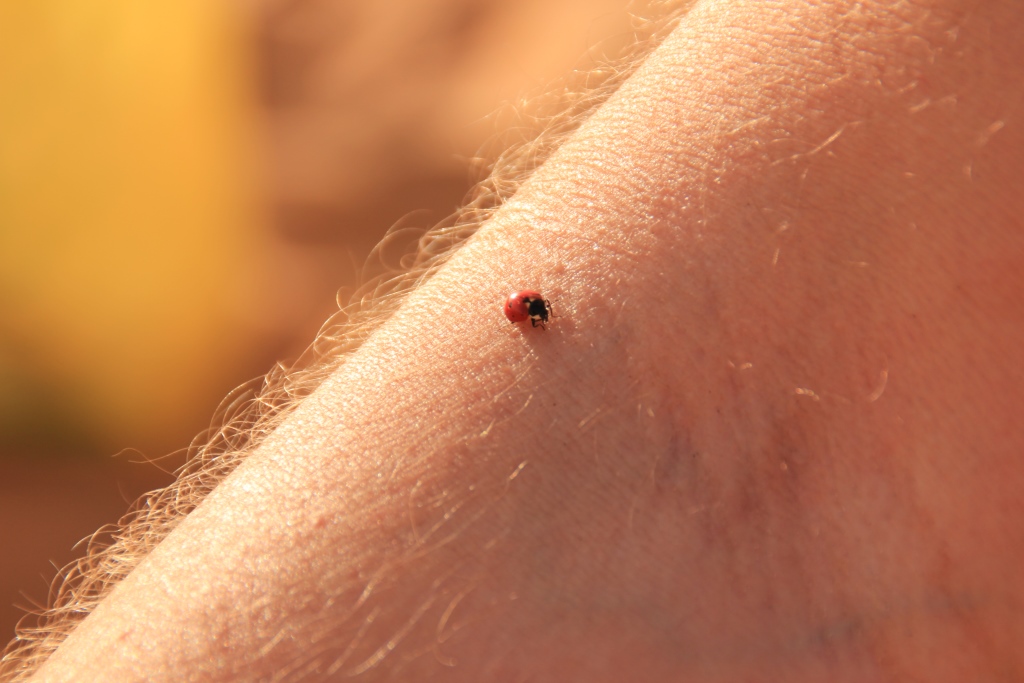 Once everything was packed up and our campspot left as we found it, I had to think creatively about how to arrange the oversized convoy.  I led, followed by four experienced drivers then put Oasis Offroad’s newly appointed Assistant Marshal – SafaMike aka Mike Galvin – as lynchpin, followed by Steve and Jeff with the rest of the guys behind (and they were all guys – this drive was very unusual in that I was the only female driver, although Mrs Sandwolff did take the wheel of their Jeep for a wee while so I wouldn’t be too lonely).  The idea was that when we hit a tricky crossing, the front five would forge the easiest possible line through some fairly big bowls and lumpy dunes, then it would be down to Mike and team to follow. 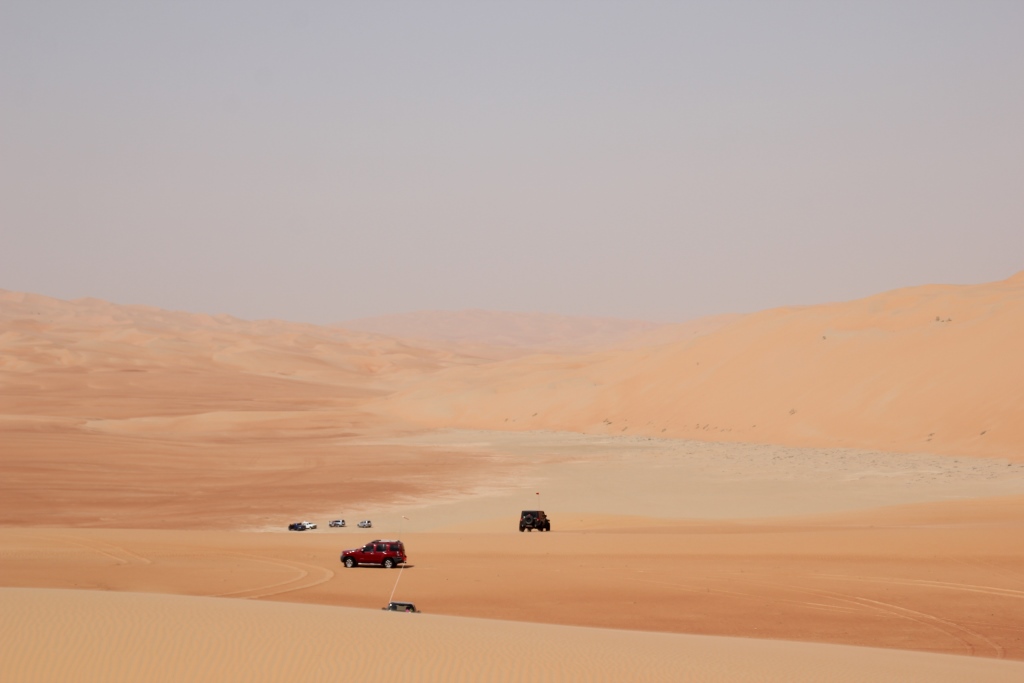 All went perfectly until I missed the easy line to cross over to Moreeb but SafaMike stepped in and found us the next best line.   Here he is snapped by Debs while encouraging us all up the slippiest and softest of slopes reminding us to  “drive it like you stole it”!  I wish I had been taking photos of Steve and Jeff’s faces as they made it to the top – it’s a great feeling when you conquer something that seems impossible! 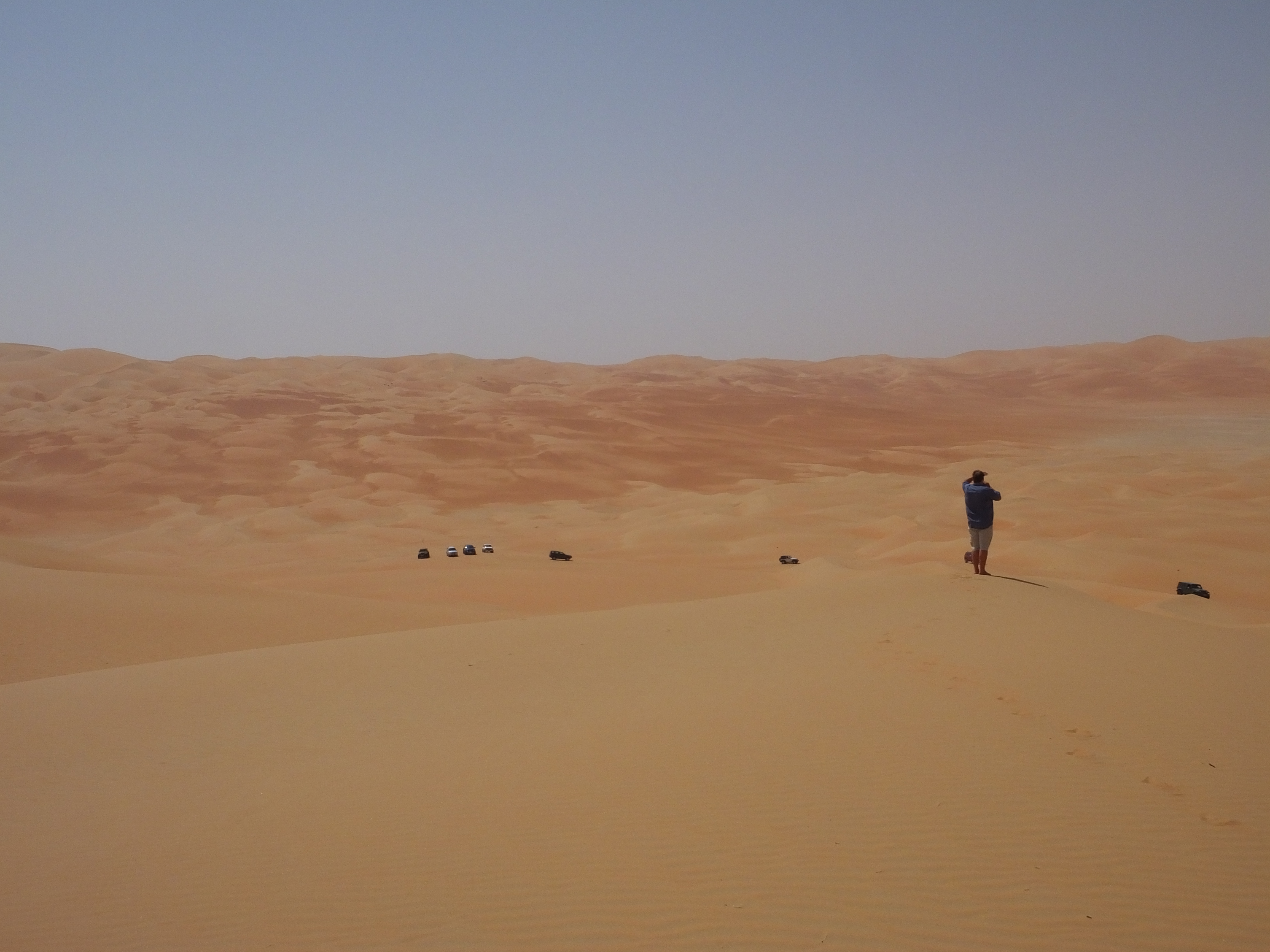 Within 300 metres we were back on my tried and tested track and we were within sight of the Moreeb Dune just 4 minutes before the projected finish time of 12noon.  It’s amazing what you can achieve when everyone works together and I have to say a huge thanks to my team – Zach & Paul, Renaud & Siyun, Bernhard & Miriam, Roger & Maira, Mike & Debs, Richard, David, Clive for their help, as well as to Jeff and Steve and their passengers May, Grace, William, Van, Ian, Natalie and Michael for trusting us to drag them 60kms or so through the Liwa Crescent!

After the group photo taken by Siyun we reinflated and took the blacktop back to real life… well most of the group did.. 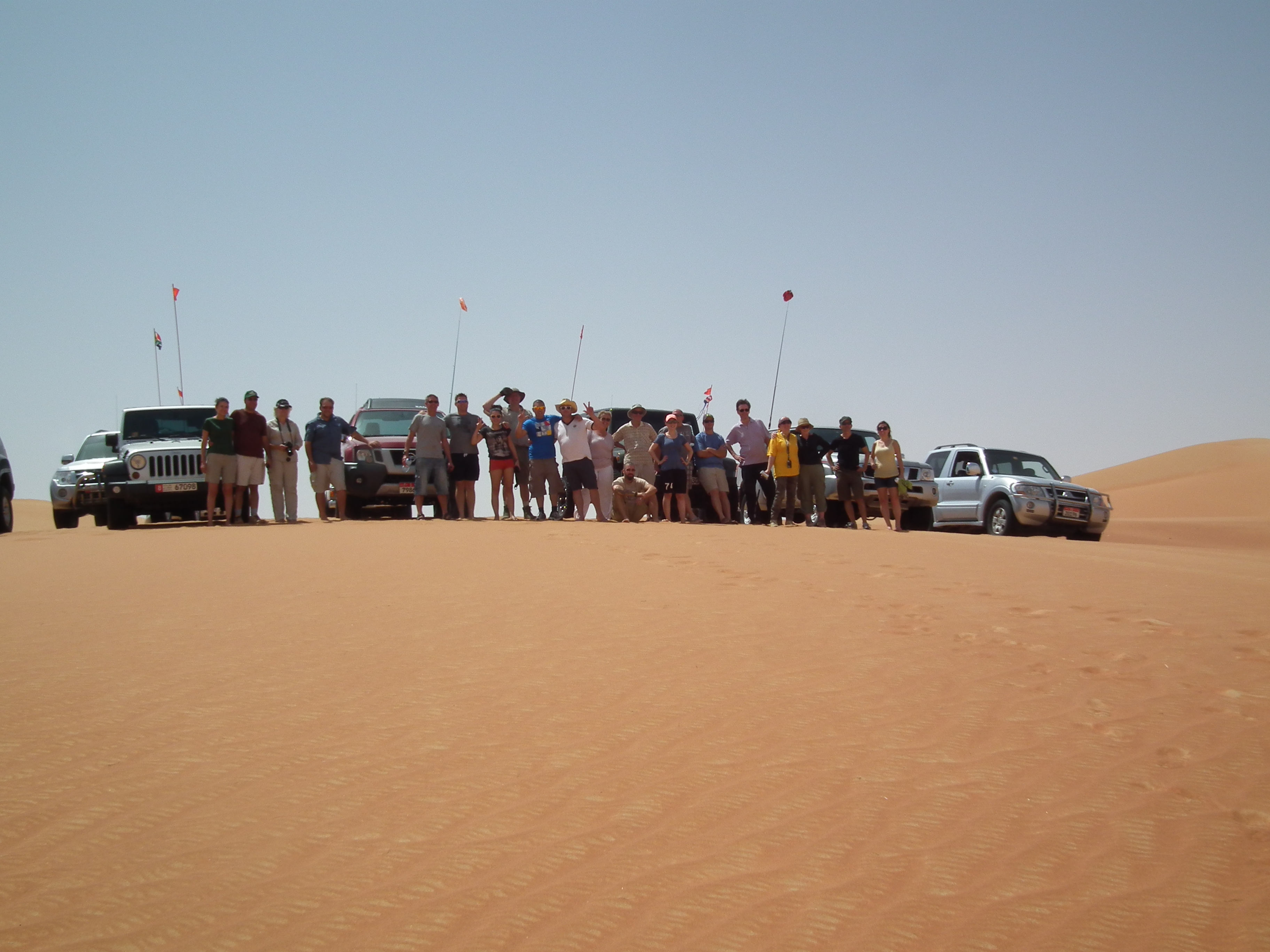 A few of us stopped at the Liwa Hotel for lunch and once I bade farewell to them I headed up to Madinat Zayed for another night in the desert before a fun morning’s drive in my favourite area for offroad driving.  I slept in the car, what with being on my own and arguably more importantly, a strong wind having blown up around sunset.  As I headed down the gatch to the rendezvous point I encountered a camel farm on the move. 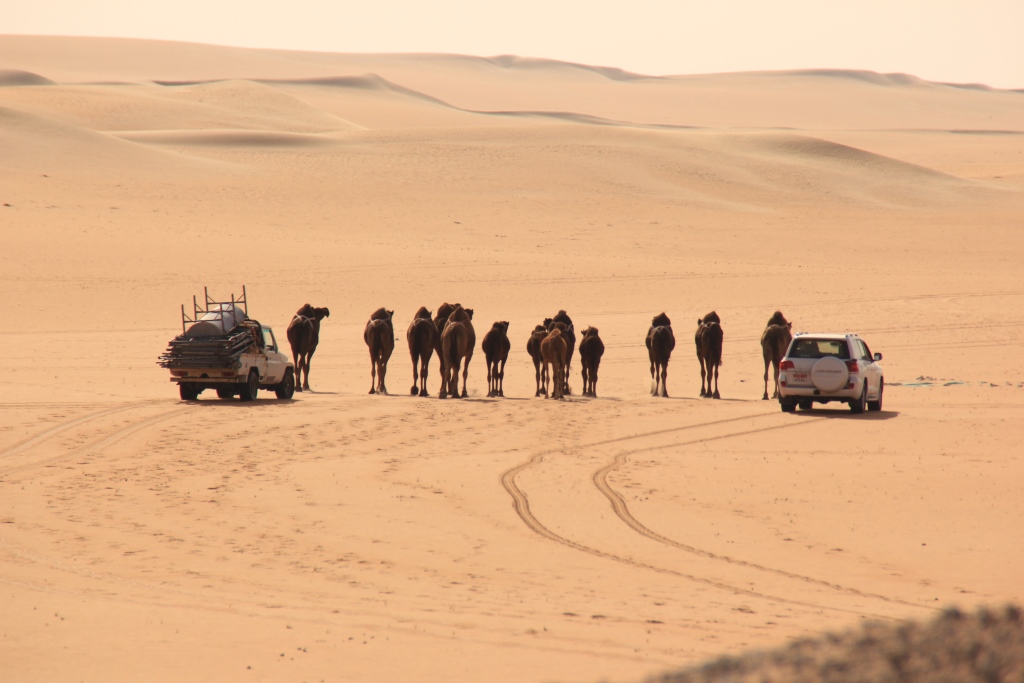 The dunes from  Madinat Zayed westward to the Ghayathi-Arada road are smooth, beautiful, not too difficult with the odd tricky bit to keep your attention  and I was very lucky to get the chance to follow the legendary Mike Nott across this area.  Two and a half hours of pure driving pleasure, no stucks, no situations, in fact I don’t think we even had any refusals.

We did stop now and then, for photos of waypoints and also of  this beautiful camel calf and its mummy 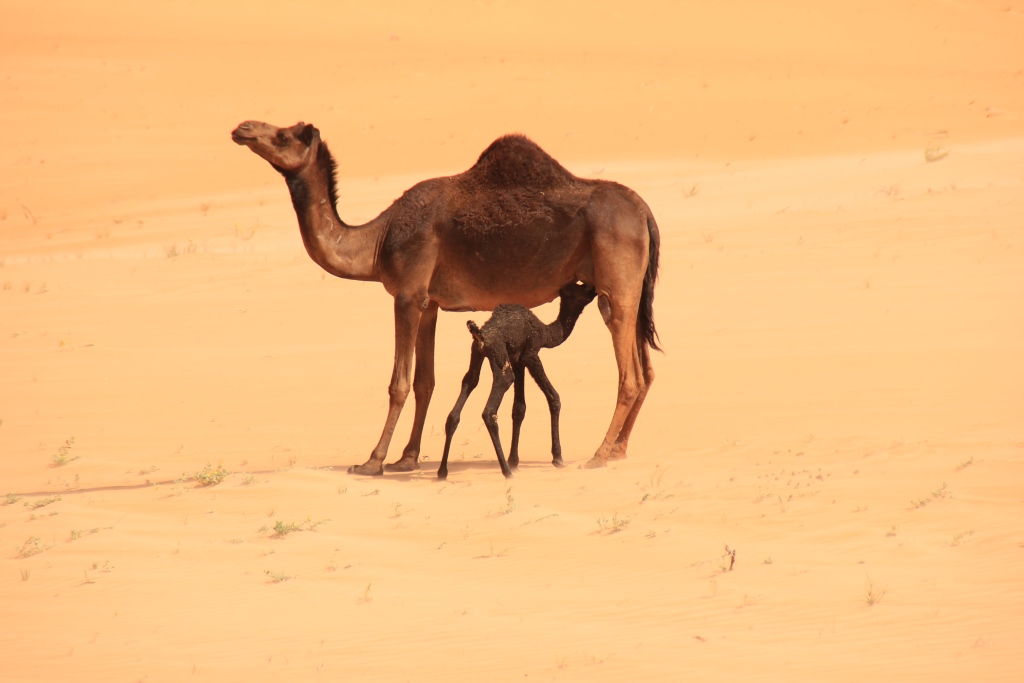 Final photo opportunity of the weekend was Mike driving on the sand to avoid camels lying down on the gatch. 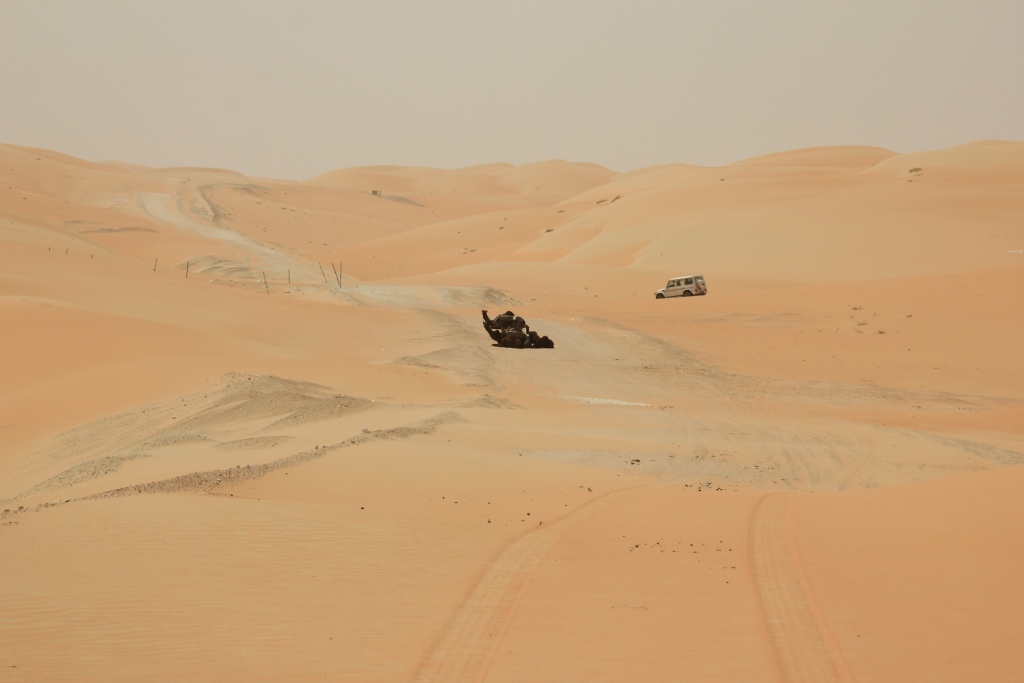 Liwa how I love you!