I’m bashing away on the keyboard as part of my homework for my Abu Dhabi Tourism and Culture Guides course.  You don’t have to write umpteen words, all you need do to pass is speak on 6 different subjects (choice of 40, not sure who makes the choice) for a minimum of 3 minutes, and pass a 100 question multiple choice test.  Which would be easy, if I could just get the info into my head to start with….it was so much easier to pick up facts and figures when I was 20!

So, to help my middle aged brain, and hopefully educate and entertain my readers, here’s the lowdown on Saadiyat Island, in arabic “Island of Happiness”.  You can see it on the Google Earth screen capture below outlined by the pink triangle.

First of all, it’s natural and not man made, and is situated just 500 metres to the North of Abu Dhabi Island.  The wonderful Sheikh Khalifa Highway (E12) runs through it – and this road IS wonderful as you can travel from the outskirts of the city right down to the North End of the Corniche in a short time.

Saadiyat Island is currently being developed by TDIC (Tourism Development and Investment Company) and when complete in around 2020, will offer upmarket residential accommodation, boutique hotels, a whole host of leisure facilities and most importantly, the Saadiyat Cultural District.

This is already partially open and last year my husband and I had a most enjoyable visit to the Manarat Al Saadiyat (translation “Place of Enlightenment”), a 15,400 square metre visitor centre which has been designed to host international exhibitions from around the world.  We explored the travelling exhibition  “Around the world in 100 objects” which was displayed in its calm and spacious exhibition areas.

The Louvre Abu Dhabi, due to open later this year is a stunning building designed by Pritzker Prize Winner Jean Nouvel.  The design has some links to the past – individual buildings, some haphazardly placed like the souqs of long ago, are linked by walkways; all are covered with a huge dome inspired by the Islamic architecture for which Abu Dhabi is so well known.  The 180 metre diameter dome has an irregular pattern of openings, inspired by the palm fronds traditionally used to create roofs of the barasti huts which were common in the capital city 100 years ago.

The next attraction due to open is the Zayed National Museum which is also housed in an amazing building, designed by British Firm Foster and Partners. It is inspired by the feathers of the UAE’s National Bird, the falcon and each steel feather will contain gallery space dedicated to explaining the history and culture of the UAE, organised into 7 categories – Sheikh Zayed Life and Times, Falconry and Conservation, Land and Water, People and Heritage, History and Society, Science and Learning and Faith and Islam.

The museum will tell the story of Sheikh Zayed Bin Sultan Al Nahyan who was the first President of the UAE from 1971 until his death in 2004. To quote the ZNM website – “Central to the stories told in the Museum are Sheikh Zayed’s strongly held values. These encompassed a passionate belief in education, conservation, environmental sustainability, heritage and culture, all underpinned by his humanitarianism and strong faith.  The Zayed National Museum has been founded in the spirit of Sheikh Zayed’s work on behalf of Emiratis and people everywhere”.

Unlike some of the other Cultural District attractions which are next to, or sometimes even over the sea, this one is set in an elevated position, and since the tallest steel feather is 125 metres, this is set to be the centrepiece of the area. I am looking forward to being among the first visitors in 2016!

When completed in a few years’ time, the Guggenheim Museum will be housed in a landmark structure, designed by Pritzker Prize winner Frank Gehry,  Inspired by piles of open gallery boxes and with ten additional iconic cone like structures will afford a total of 31,000 square metres of exhibition space.

The Guggenheim network of museums is visited by nearly 3 million visitors each year; others are in New York (opened 1959), Venice, Italy (opened 1979), and Bilbao, Spain (opened 1997).  The Solomon R Guggenheim Foundation was founded in 1937 to promote the understanding and appreciation of art and visual culture.

The UAE Pavillion, originally displayed for 6 months at Expo2010 Shanghai has its permanent home close to Manarat Al Saadiyat, where it is set to be an exhibition and events venue.  Inspired by the sand dunes of Abu Dhabi, the structure, which reaches 20 metres at its highest point,  welcomed almost 2 million visitors at the expo who learned of the culture and history of the UAE by watching this presentation.

All the buildings in the Cultural district of Saadiyat are at the cutting edge of modern architecture, many inspired by UAE geography and the next building we will look at is the Performing Arts Centre.  Designed by Iraqi/British architect Zaha Hadid, who incidentally also created the iconic Sheikh Zayed bridge which links AD Island to the mainland, there are references to natural shapes such as leaves and stems, buds and branches.  As a side note, Zaha Hadid was ranked in 2008 as 69th on the Forbes list of “The World’s 100 Most Powerful Women” – a cultural icon.

One of the last buildings due to be completed in the area will be the Maritime Museum, designed by another Pritzker Prize winner, Tadao Ando.  Born in Japan, this self-taught architect as created a dramatic building which will house exhibitions telling the story of the UAE’s rich and long sea-faring tradition. The structure which will straddle the Arabian Sea will combine space, light and water both inside and outside and will be a suitable monument to Abu Dhabi’s maritime heritage. 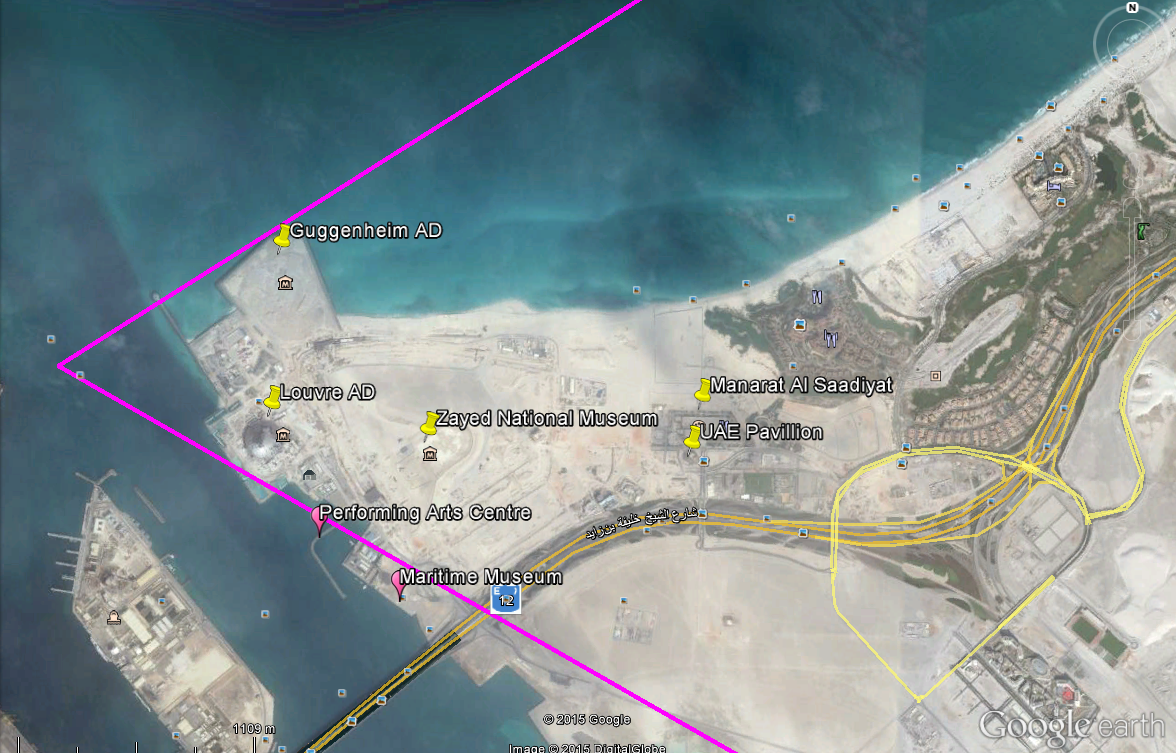 Saadiyat Island – well worth a visit now with follow up visits over the next few years!