Lots of friends have been asking my about my Abu Dhabi Tour Guide Course.

My motivation for this was simple: I hope that in a matter of months I will be launching a business in the tourism sector, and one of the boxes to be ticked was that someone in the company has to be an accredited tour guide. 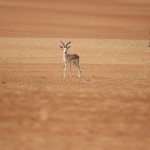 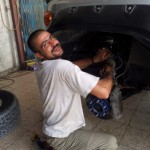 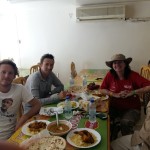 You might have noticed in the 6 years I have lived here I have traveled extensively throughout the Emirates, particularly in Abu Dhabi.  Ok particularly the Abu Dhabi Desert.  I know where you are likely to find wildlife such as gazelle, oryx and lizards in the desert; I can tell you which garage you can trust to change shock absorbers in Madinat Zayed; I can even advise the best place for a curry in Liwa City; but did the course syllabus cover any of these things which are so important in my desert wanderings?  Of course not!  I thought I knew a lot about the culture before but had to conclude that despite having a wide knowledge of the Emirate, there were many areas in which it lacked depth.

It is a three-step process to undertake the course.  First of all you need to get yourself a Police Clearance Certificate – a surprisingly quick and easy process which cost me 50aed.  You submit a scan of this online, along with scans of your passport and residency visa, fill in a few details then wait to hear if you have been accepted for the next step, which is the “interview.”

The interview consists of a one hour meeting, held at the European International College in AD, when someone from the Abu Dhabi Tourism and Culture Authority (TCA) gives a short outline on the course and objectives; each candidate then has a short interview where they ascertain you can speak english fluently, assess your suitability and check your documents.  The cost is 200aed, payable upon booking.

You will receive an email the next day if you have passed the interview, inviting you to attend two one-day workshops; the first covers the culture and heritage of the UAE and the second is about Abu Dhabi Attractions (including Al Ain and a little about the Western Region).  The cost is 400aed.

Once you complete that part, you will then receive an invitation for the practical training which lasts for four days.  The focus is on bus tour guiding and you learn how to keep up a running commentary; pointing out attractions and certain buildings, as well as talking about the culture and heritage of the Emirates in “dry areas” where there is nothing interesting to point out – linking these together to create a “story” which flows.  If you do not have a first aid certificate then there is a half day course at the end which is compulsory to attend.  The cost of the practical training is 1900aed.

Once you have undertaken the training there are two days of assessments and tests.  Starting with a presentation, you are given two subjects to talk about for up to 3 minutes each; this is followed by a 100 question multiple-choice test.  For the final assessment we are put on the bus once more, and take turns to give a commentary.

For the presentation the subjects I was given were Sheikh Zayed (very lucky to get that one, I could talk about him and his achievements for hours) and the second was on the Abu Dhabi and Yas Island Golf Courses.  People who know me will be smiling at this (I dislike golf intensely and I would rather go for a nice walk without chasing a wee white ball all over the place) but I had done my homework and talked for the allotted time with no problem.

The course is run six times yearly – and there are up to 50 places available on each.  My complete course, including the interview, took place over 5 weeks, however it is set up so you can do one section at a time if cost/time is a problem.

There were 30 in my group; I was the only native English speaker and the only person who was not bilingual.  Many were from India and would have been educated in English from a very young age; the others were from all over the world – Germany, Venezuela and China to mention just a few, as well as two lovely local young ladies.

Many were already tour guides in Dubai; each Emirate has its own accreditation system so a separate licence is required if you guide in Abu Dhabi.  There are large fines if you are caught guiding in Abu Dhabi without the relevant licence and I am sure the situation is the same in other Emirates.

The course had interesting subject matter but I tend to have a poor short term memory.  So I made a point of visiting as many sites as I could both before and during the training – and I blogged about them of course

The Oases of Al Ain

I have to say I found the bus part tough.  Four half days on a bus in the hottest part of the year – and I suffer dreadfully from travel sickness on a coach.  Day one saw me not eating anything beforehand and using my sea-sickness bands, which were ineffective so I felt half-dead by the time I finished.  On subsequent days I took dizinil travel sickness pills and these worked well, though did make me a bit drowsy – despite this I must have given an ok performance on the coach test or else I would not have passed! 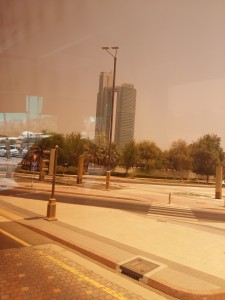 Nation Towers – did you know that the highest skybridge in the world runs between them?

I spent more time on Abu Dhabi Island during the course than I did in the last 3 years combined – I normally go “on island” once or twice a year at most, normally to visit friends. Despite being described as an “accomplished navigator” I struggle to find my way around in cities. Getting to grips with which building was which was tricky until I spent a few hours on google earth, mapping the bus route in accordance with the provided script.  Once I could visualise Abu Dhabi from a satellite perspective then I was fine! 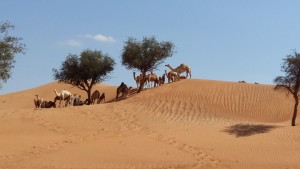 The Ghaf – national tree of the UAE

As always my husband was a big help to me; he drove the bus tour route with me the evening before and helped me work on my script; he watched countless Youtube videos on the heritage and culture of the UAE and he suggested we stay in AD during the course, which saved on so much travelling and allowed more time to go and explore the city.  He also listened to me for hours as I practised the bus tour, so I reckon he could possibly pass the test too! 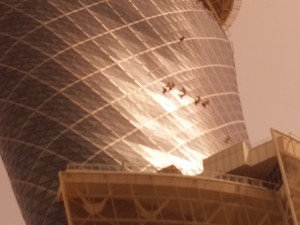 One thing I did not expect was the support everyone in the group gave to each other – we set up a whatsapp group to exchange links and information; learning the contents of the course textbook may not have been enough to pass; students are expected to conduct extensive research on the Emirate and culture both during and after the course.  We are all still in touch and I know some great friendships have been made!

I wish I had done this years ago as I could have been making an income as a part-time tour guide – it is permissible for tour companies to employ you on a freelance basis for this!  Looking back, the course, although challenging at times, was very enjoyable and I would highly recommend it.

In the meantime, if anyone wants shown round Al Ain or the Liwa in the next couple of months….. you know who to call! 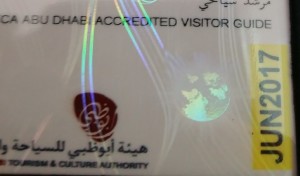 Find out more about the Abu Dhabi Tour Guide Program by clicking here.

You can see my favourite Abu Dhabi Tourism video here.