After 8 years of travelling to and from the Middle East, finally, there is a scheduled flight direct to our “home” airport of Edinburgh (Thank you, Etihad Airways)! 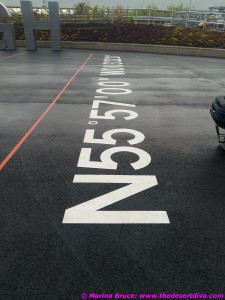 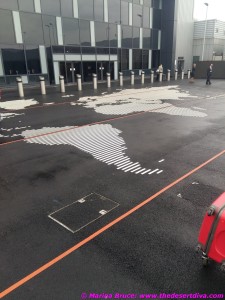 You get off the plane, grab your bags and head up to the Car Rental Building – but you have to brave cold weather on the 500 metres walk (yes, since we are used to 30-50C, it’s a tad cold even in summer)

We always use Enterprise Rent A Car  – they are friendly, efficient and we are on their loyalty program so get some extra add-ons for free – but there are about half a dozen rental companies in the same building.  We hire cars for up to 60 days a year and keep the costs down by insuring our excess with an independent company.  Many providers will not accept you if you are non-resident in the UK or EU, but World Wide Insure do, and we recommend them.  We have never made a claim but we had to upgrade our policy while we were in Scotland as our hire term was over the standard plan of 30 days, and they were very helpful and efficient.

Formalities completed, you walk up to the car collection point where there are rows and rows of tiny cars, all so close to the ground – definitely no need for sidesteps with these!

Meet Plastik Bertrand, aka the lego car, our “wheels” for the next month.  I normally like white cars but hated this one, it is so eyecatching for all the wrong reasons (yes I know I drove an FJ cruiser for a number of years and it is not pretty either but at least it had a bit of retro style), and quite frankly, was a bit cheap and plasticky.  There were not too many of them around – but we did manage to find it’s twin in the Ikea car park. 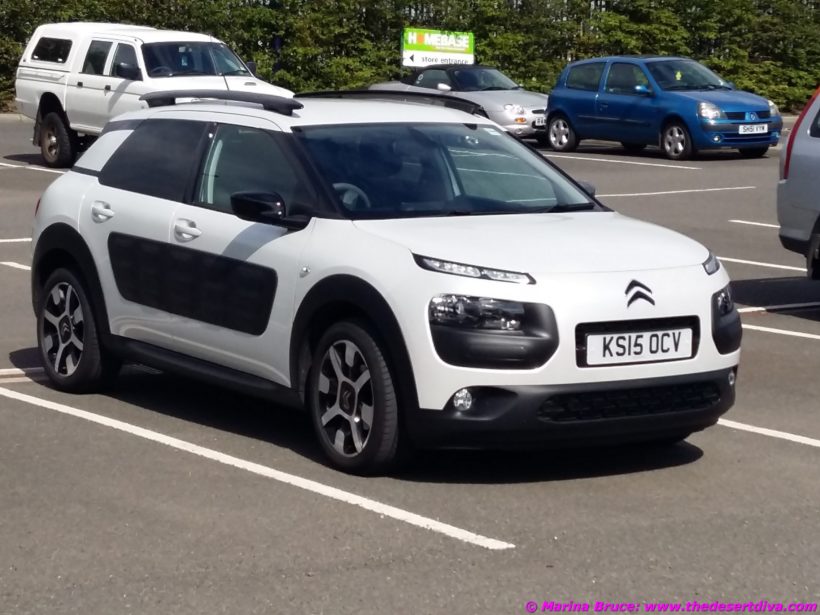 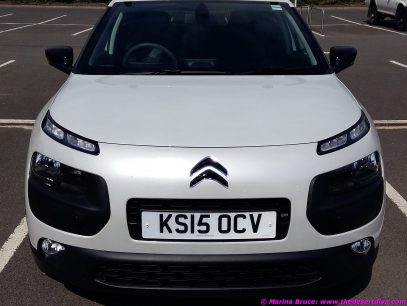 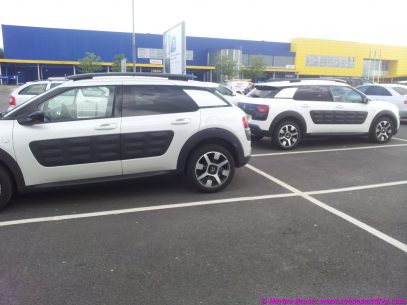 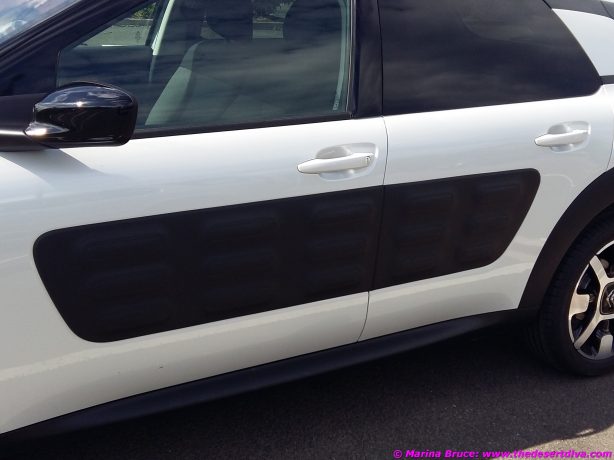 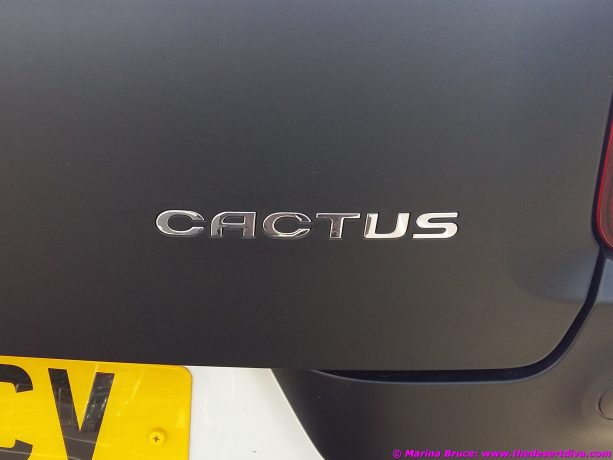 It took a second or two to locate the steering wheel – as a long time expat I now think that left hand drive is “normal” – and even longer to work out how to programme the gps (which was rubbish by the way).

Onto the road, driving carefully on the left…. now which direction do you go round a roundabout here?

It does not take long to get accustomed to driving on the wrong side of the road, but one thing I will never get used to is the state of the roads in Scotland.

Potholes everywhere – if I lived there I would buy uprated shocks for a 2WD – sore on the car and on the backbone! 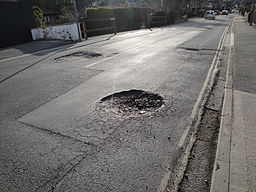 Now in the UAE, our roads are very well maintained, with wide lanes and full streetlighting in all but the most remote areas.  In Scotland, we have dual carriageways and a few motorways, but many of the roads are two way.  Can you imagine meeting this on a narrow road? 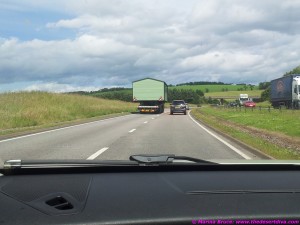 Scotland, in common with the UAE has speed cameras all over the place except that in the land of heather and rainbows they are painted fluorescent yellow and/or red, so people see them and slow down (technically they are put there to slow traffic, not to create an income.).  Tip – if you are an expat always hire your car using your driving licence from your country of residence – you will still get fined if you speed but there won’t be any points on your licence.

You soon notice there are very few 4x4s on the road, most of them are used for land work, whether it be farming, forestry or tourism.  Road tax and the high price of petrol encourage drivers to own small cars with tiny engines – but these are tuned to give decent power at low revs (Plastik Bertrand was 1.6 litre diesel, plenty of acceleration).  Petrol by the way was around 1.18GBP (6.77AED) in July 2015, which is why this old patrol was running on recycled cooking oil! 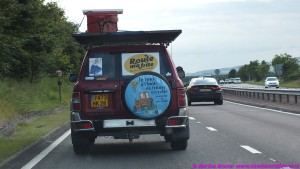 There are a few rally/club runs around the Scottish roads; in fact this year a new long distance touring route, backed by the government has been created – the North Coast 500.  Many years ago before kids Mr Diva and I would head to the highlands for camping holidays and we have done a fair bit of this route – the route  round the lochs in the west are spectacularly beautiful.

We encountered many aged cars as we traveled to Aberdeen – these were part of the Carbage Run, a long distance drive in a vehicle costing 500 Euros or less. 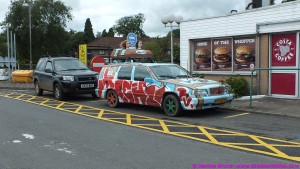 I am used to seeing bizarre/odd things every day in the UAE and although to a Scot the photo below is neither bizarre or odd, it is highly unusual to see a kilted Scotsman, riding a bike, in the rain. 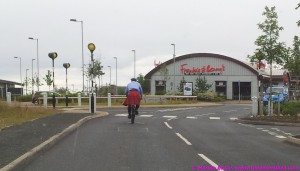 But the best bit about driving in rural Scotland – the scenery!  The beauty is unsurpassed, and one often longs to find somewhere to stop to take photos! 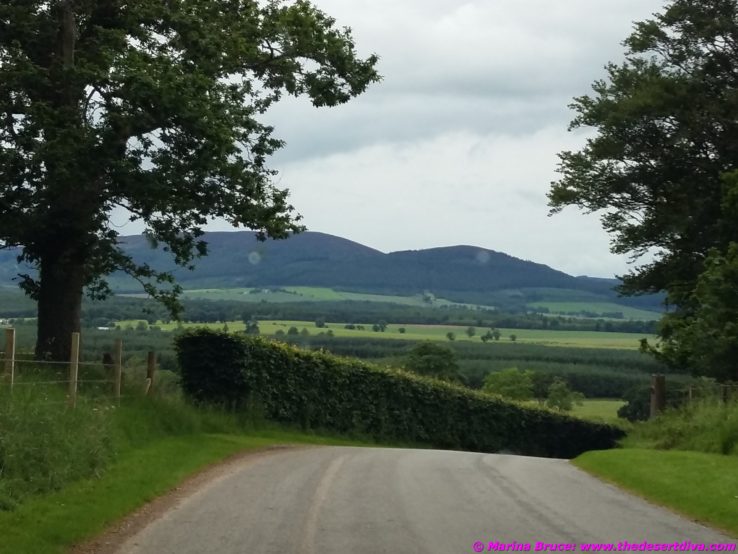 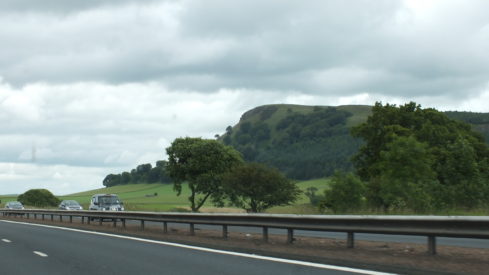 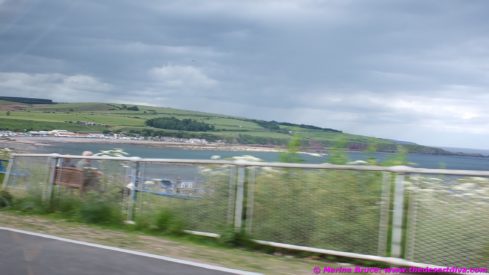 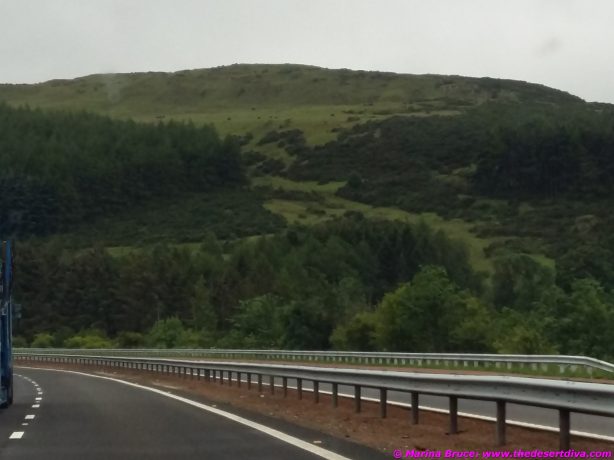 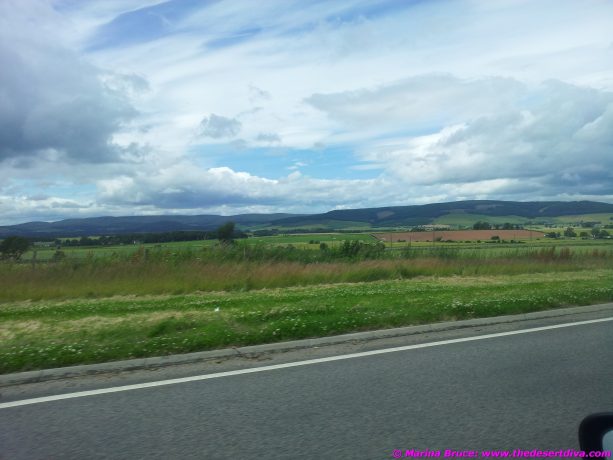 Necessary: yes (for me)

Expensive: yes, but hire a sensible vehicle and keep the costs down