I first encountered the name “saluki” in the context of a beauty contest at ADIHEX back in 2008.  “Shoo hatha” I said, or would have, had I known, way back then, that this was arabic for “what is this” – I did not expect to find a beauty pageant in the UAE! 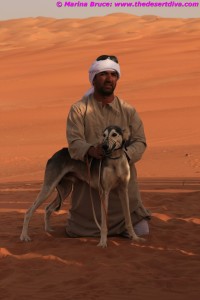 Salukis are one of the oldest dog breeds around and have been the companions of Bedouin for thousands of years.  Their role is to assist with the hunt; as they are “sighthounds” they hunt by sight rather than scent and are the most majestic of dogs as they race across the sands in pursuit of their prey.  The minute they spot a fast moving animal, such as a hare or a gazelle, they are away in a flash and their exceptional stamina ensures they can easily outrun their prey…. see what I mean in the photo below! 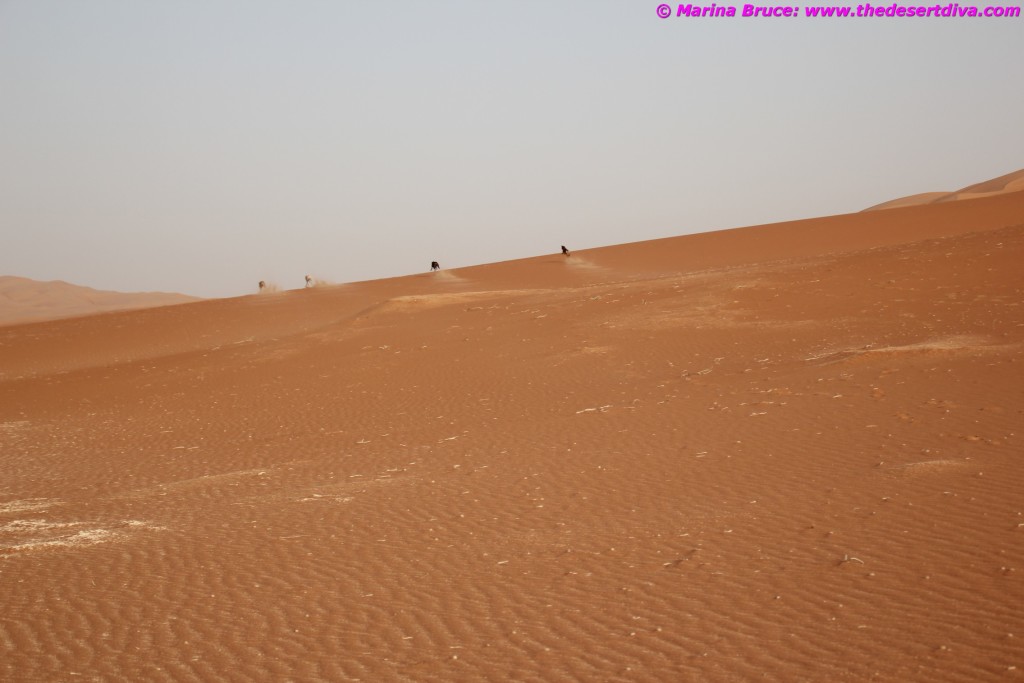 Salukis have a single layer coat – the lack of a downy undercoat means they never develop a typical “dog” smell – which helps them survive the heat of the desert.   There is a great variation in colour, from pure black to red, sandy and white.  There are two different varieties, the short haired or “huss” and the feathered “ahdab” and you can see some of the best of each at ADIHEX each year, where they run lure coursing and other competitions as well as the aforementioned beauty contests.

Traditionally salukis are very much treated as one of the family; they eat the same food as their human; chicken, rice, lentils, biryani and will sleep beside their master in his tent.

Sadly today, not all salukis are in the care of loving families and you see many strays wandering the streets of Al Ain.  Some have run away from their owners – you really need to have built a good bond with your saluki before you let him off the leash as these dogs are genetically pre-programmed to run and given the chance they will; others have been abandoned on the streets by families who no longer wish to look after them.

However in the Garden City help is at hand for them in the way of  Animal Welfare Al Ain who have some dedicated members who spend large amounts of time catching the strays before taking them to the vets for a check up and finding them a foster home.  My friend Marci does a lot of good work rescuing all breeds of dog, but she does have a very soft spot for salukis. 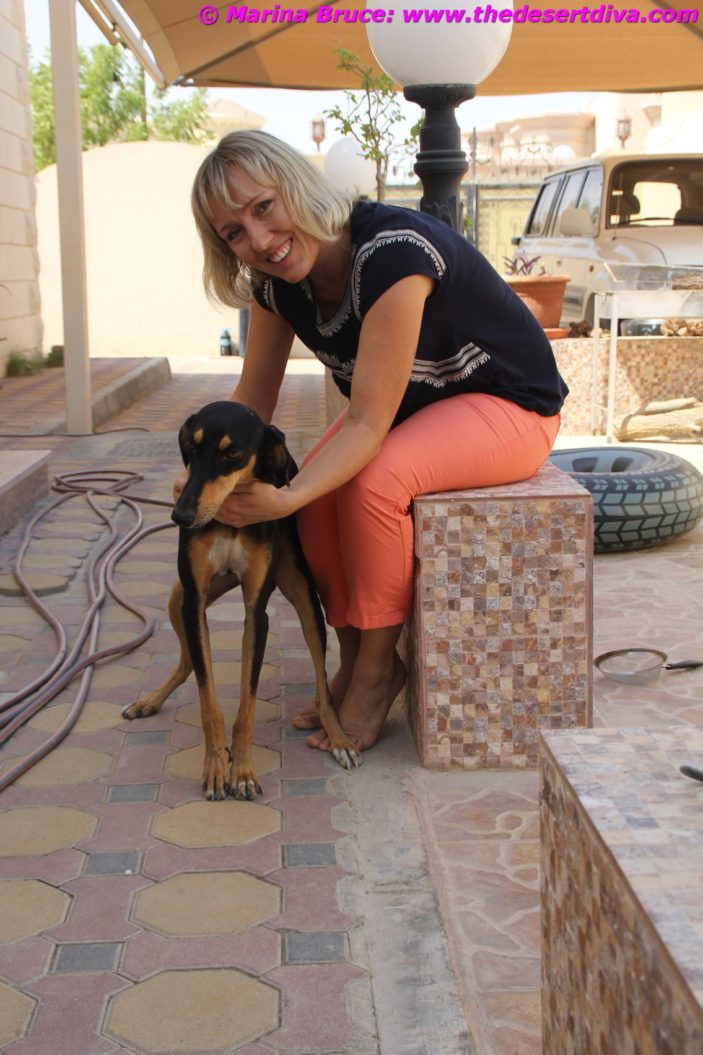 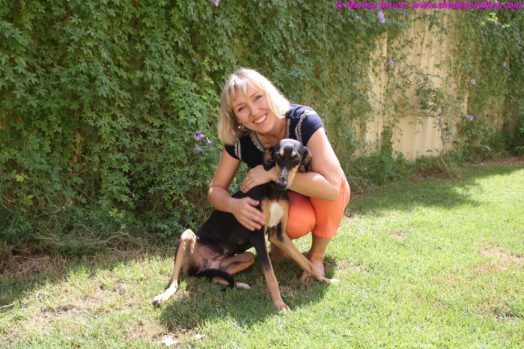 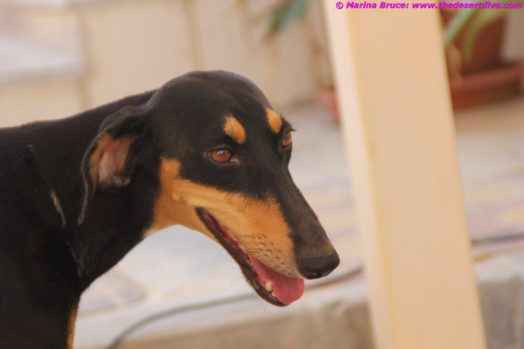 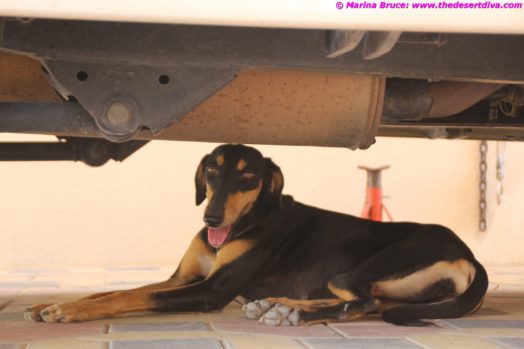 Currently she is fostering Sally, a purebred found tied up in Al Ain a few months ago.  Harsh tight ropes had bitten deep into this lovely doggie’s flesh but time and lots of tlc have brought her back to good health – although if you look closely you can see where the scars had been.  Marci has found a permanent home for her in Seattle but at the moment is looking for a flying buddy to accompany her on a KLM flight to Seattle or San Francisco (more about flying buddies later.)

Salukis are adopted by people from all over the world and our friends Mike and Jane Bryan adopted Lulu a short time before returning home to the UK.

Mike tells us “we weren’t looking to adopt a saluki in particular, we’d just started helping out a lady who was finding foster homes for stays or un-wanted dogs. We were asked to go and see her but were warned that she was not in a good condition, and very skinny.

He goes on “having fostered her, we put some weight on her, she turned out to be a very playful 6 month old…we renamed her Lulu as she was pure white it matched one of the arabic names for a type of pearl. 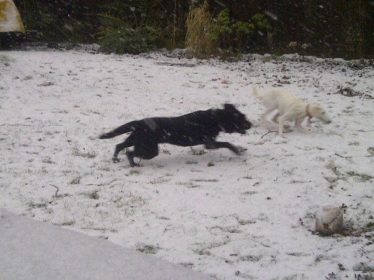 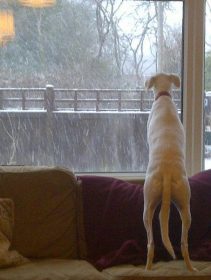 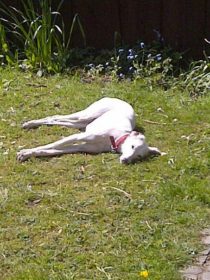 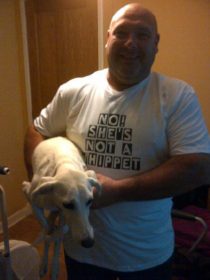 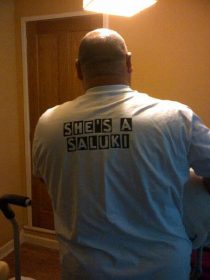 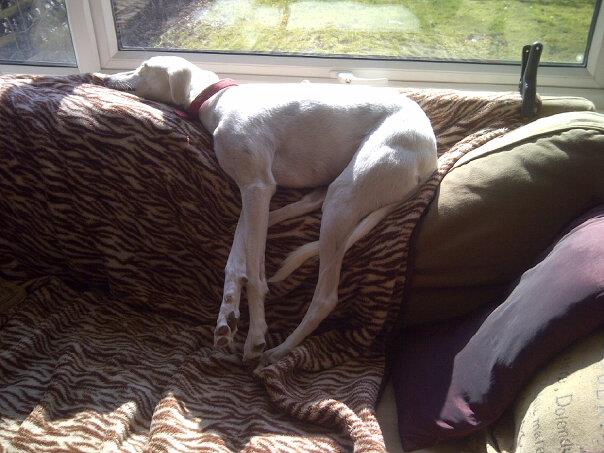 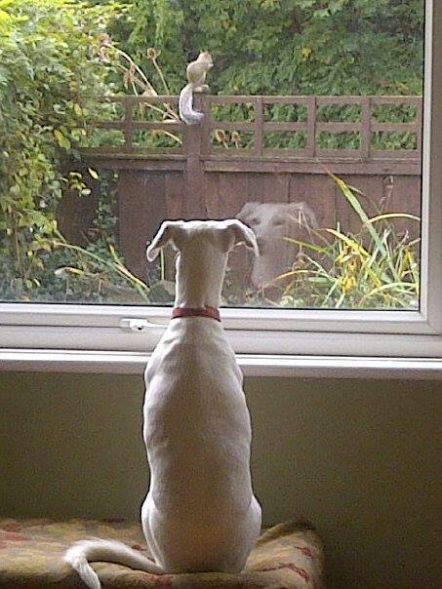 When it came to the point when myself and the children were moving back to the UK, it came to the decision of what to do with Lulu…She was now in our hearts now and we couldn’t leave her to possibly get into the situation we found her in, but with a £2000 (12,000 aed) plane ticket to take her home it wasn’t a cheap option….but back home she came.

At home in the cold wet UK,she has settled in well. We now have 4 dogs and she is the lead dog, and keeps the other boys in place. With the weather being colder here she has a coat for when it rains on walks, as she doesn’t like getting wet..or getting wet feet and doesn’t do puddles. At any given point she will be found lying in the sun…when we have some.! We weren’t concerned about the big change in climate as animals adapt and we knew we could give her a loving forever home with us…totally different from the tortured early few months she’d gone through, tied up and being starved to death… that was the main thing.” 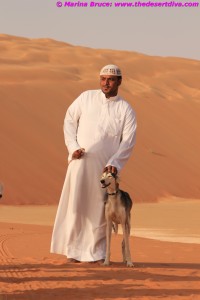 Find out more about the Saluki:

The Arabian Saluki Centre, located behind the Abu Dhabi Falcon Hospital, is open for visits by arrangement and if you are lucky enough to own a saluki, they offer boarding kennels and a range of other services.

How you can help –

Adopt a saluki – why buy when you can take your pick from the many abandoned dogs who are in temporary foster homes or shelters.  Occasionally puppies are available but most available for adoption seem to be young dogs, about 1-2 years old, which is an excellent age for a “second hand” dog – you know what you are getting in terms of appearance and temperament yet they are still young enough to train successfully.

Be a travel buddy – charities or future owners cover all travel costs of the dogs as they travel to their new home.  What AWAA and other charities need however, is a “travel buddy” – someone who will be travelling on the same plane as the saluki.  Paperwork is taken care of, so really there is nothing for the travel buddy to do apart from be on the specified plane!