*Please note – the area I camped in is now behind a fence!  There are some non-beach camping spots available nearby, including the side of the peninsula which faces KSA *

We have had another public holiday – this time Ascension Day – and  I managed to persuade my husband to come with me to the most remote campsite in the UAE.

The weather is fairly hot at this time of year – around 40-42C during the day, dropping to around 25C overnight – and we headed to the coast in search of cooler weather.

As he has spent more than half of the last nine years outside of the UAE (if you can count his working time on Das Island, which is part of the UAE but 150kms offshore!), Neil has not seen so much of the UAE as I have, so I was keen to show him some more of Al Gharbia (Western Region, Abu Dhabi).

I am sometimes reluctant to give out campsite co-ordinates as selfishly, I would like to keep these prime areas to myself; however, I am happy to give out these ones since I bet less than 1% of my readers will even consider going there, despite it being accessible by AWD or “softroaders.”  The Sila Peninsula is the last piece of land before the border with Saudi Arabia, over 310kms from Madinat Zayed, which is the nearest main city.  (It could have been worse – had we lived in Dubai we would have needed to travel around 490kms!)

I had asked some keen overlanders for recommendations of campspots on the peninsula and received a few really good suggestions  (thank you Shaun, Clive and Will);  I spent some time perusing these on Google Earth and in the hope of finding a clean beach, we opted for the most remote one. 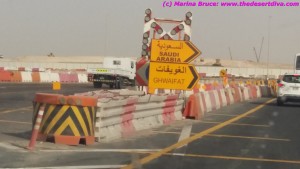 To travel to the Sila Peninsula, get yourself on the E11 heading westwards and keep going….and going….and going.  There is not much between AD and Sila except for Ruwais, now boasting a mall which has at least three coffee shops and a Lulu therein.  You also have to negotiate many kilometres of roadworks as the E11 is being doubled in width from two lanes to four and the roadworks start just a few kms after the Mafraq junction in AD – take care, especially at peak times and at night!

There is a small town (City) at Sila which has a pharmacy, Co-op shop as well as many small shops such as bakeries, groceries and the like.  There is also a new ADNOC Oasis Petrol Station there, a new addition since my last visit in early 2014.

A few kms from Sila, once more in the middle of roadworks, you will find the turnoff marked on the KML file and once you take this drive up the road for around 10kms until you are clear of the fence and you see the signs below.  Thereafter search the coastline for a spot which takes your fancy, pitch your tent and sit down and enjoy the peace!  (Obviously, the further up the road you go, the quieter it is.) 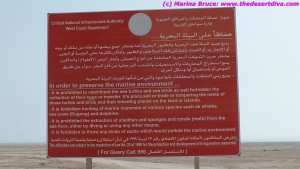 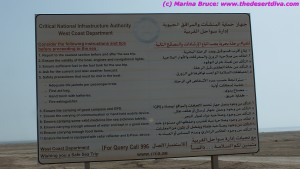 We found the beach to be relatively clean although any beach which does not have a squad of dedicated cleaners will have some flotsam dotted about.  At least there were no remnants of takeaways so often carelessly left behind – very important when you have two dogs who will hoover up any waste food going!  There was plenty of dry wood lying around which gave us a great campfire later – regardless of the temperature it’s not a camp without a fire!  There is nothing to do there but beachcomb, stargaze and relax! 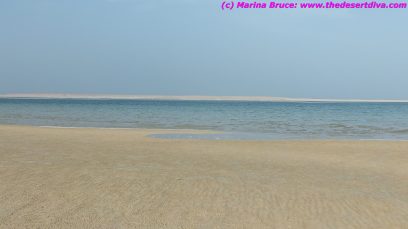 Our own private beach 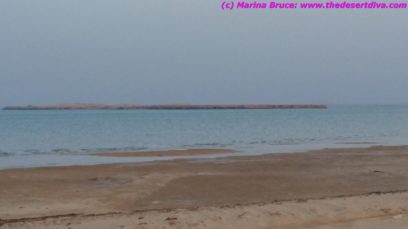 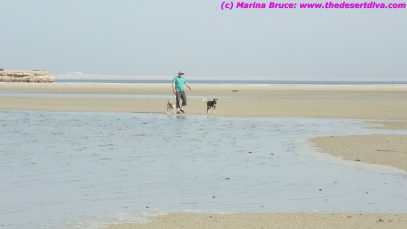 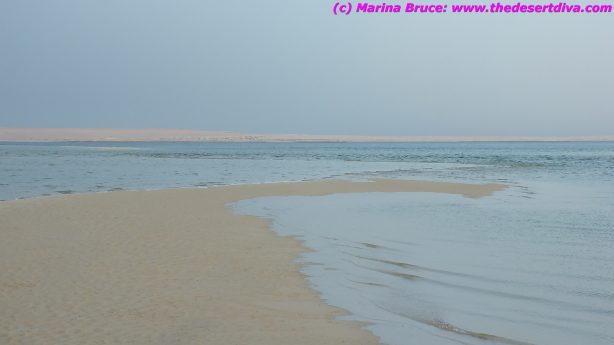 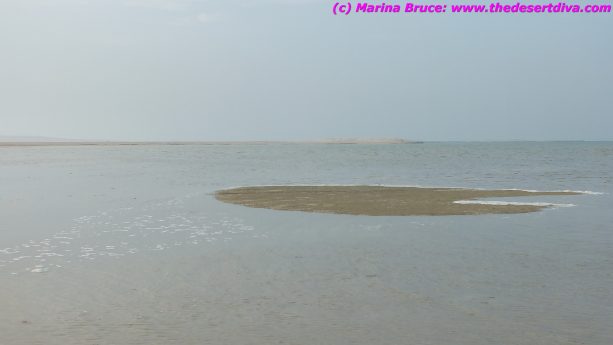 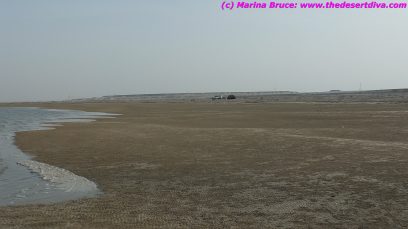 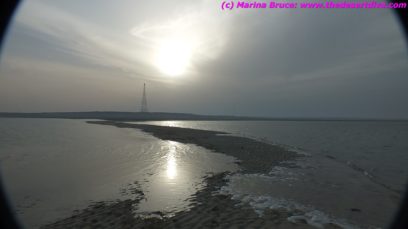 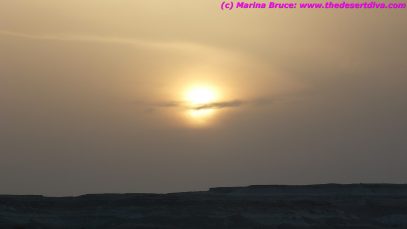 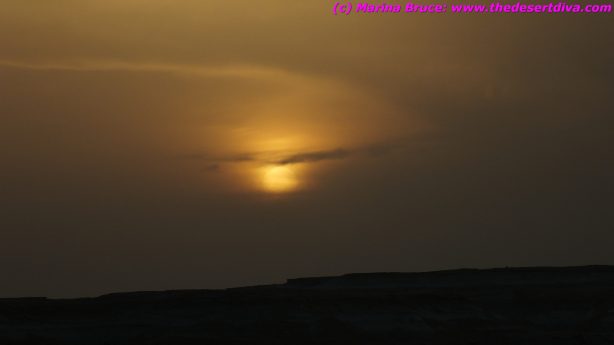 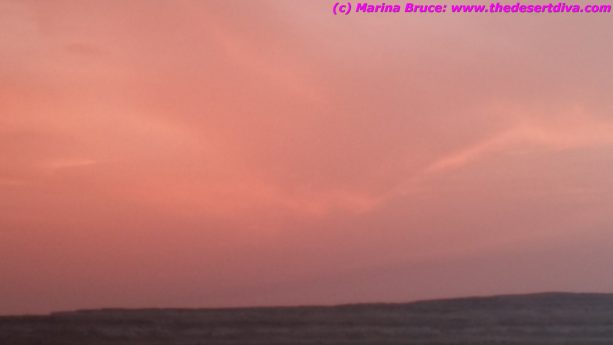 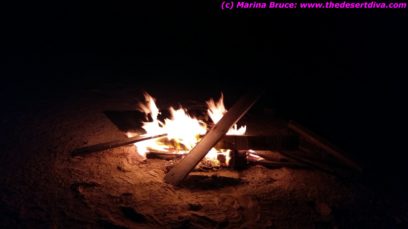 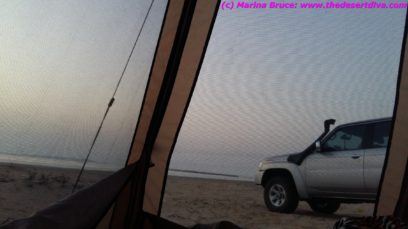 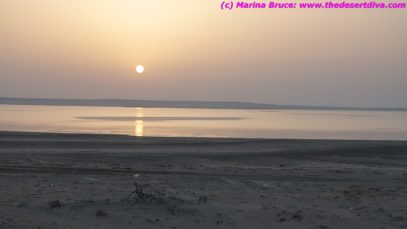 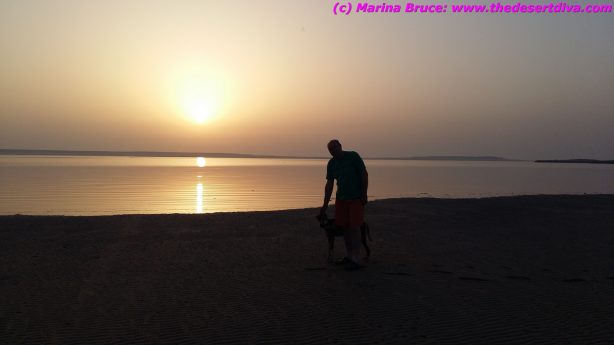 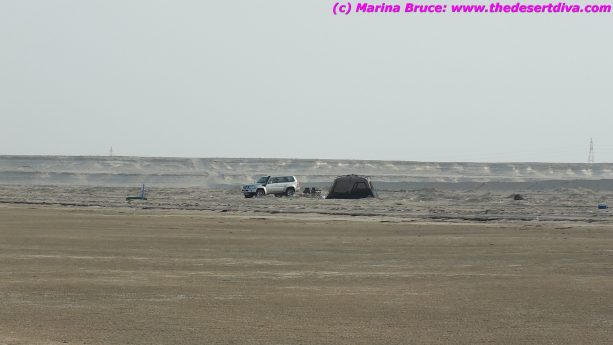 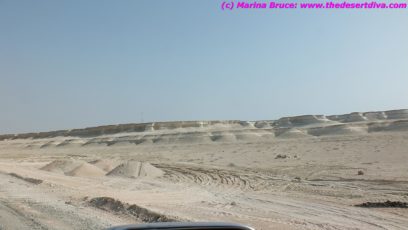 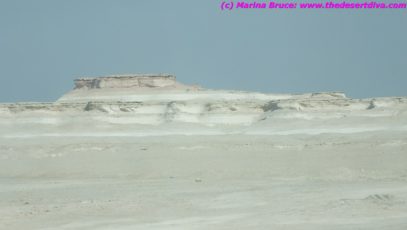 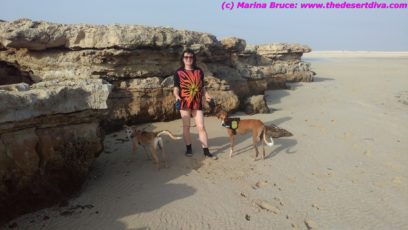 You can walk over a sand spit to this island 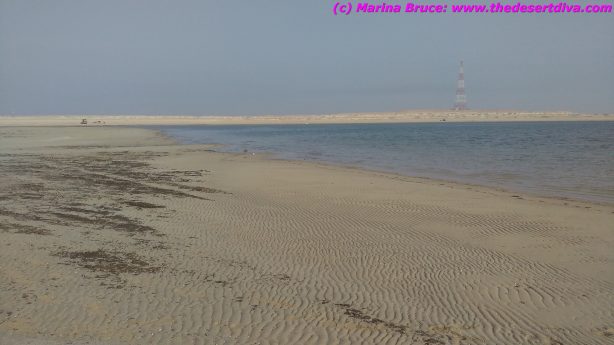 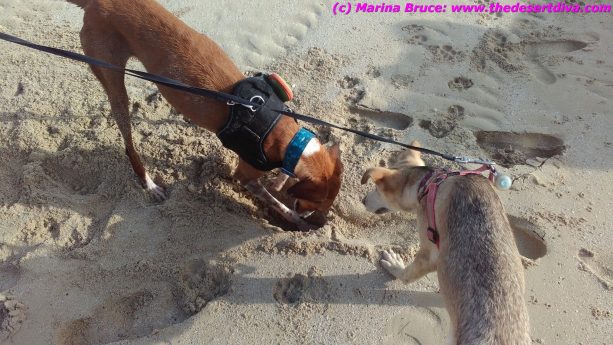 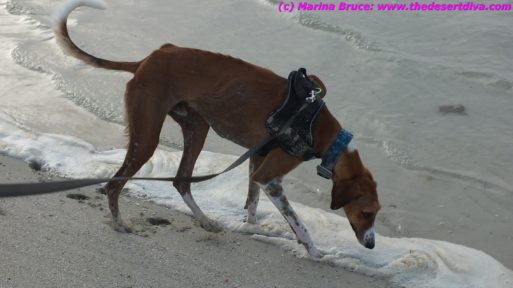 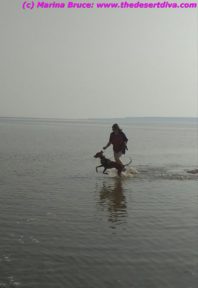 A saluki/azawakh likes water? Who’d have believed it. 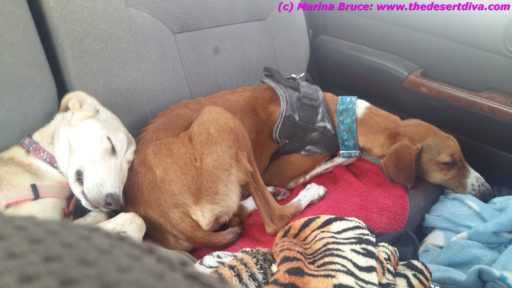 Must have been a good trip – the bairns are fast asleep on the way home!

I had to chuckle as I tagged some photos for a facebook upload with my location – suggested places nearby came up as Hamad International Airport in Doha! 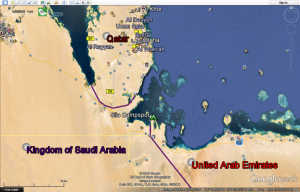 We were camped just a few kms from the most northerly point in the UAE.  Beyond the peninsula there is a military checkpoint before a causeway to Qaqa (Gaga) Island which is the most extreme NW point in the country, however at the moment expats cannot access this area. 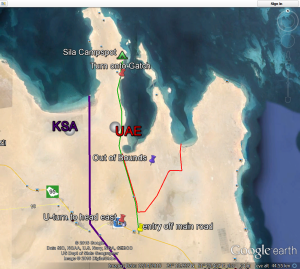 There are plenty of coastal campspots available – over 19kms in total on the east of the peninsula!  Our one was recommended to us by our friend Clive and we particularly liked it as there was a large expanse of beach to walk on when the tide was out.  Access was by a well used rough track and AWDs with low clearance should have no problem getting there.  If you are one of the 1% who makes the journey here, please do me a favour!  Rubbish left by daytrippers and campers ruins an area for those who follow – please remember to take away all your rubbish!  Leave only footprints 🙂 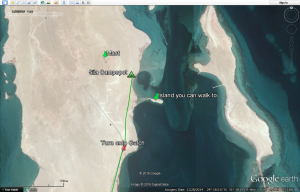 One more thing though – at the moment there are roadworks on the E11 which means that the u-turn nearest the exit point is closed.  To head eastwards back to Abu Dhabi you must drive into the border complex and make a u-turn just before the gate marked “official vehicles.”  (Bit of a panic moment til we figured that out!)

I would really appreciate your feedback if you get there – it is a long way from anywhere but that is part of the appeal!  Etisalat subscribers get a 3g signal from the mast nearby.