One of my biggest regrets since coming to the Middle East is not signing up to a conversational Arabic class until my 6th year here!

What held me back was 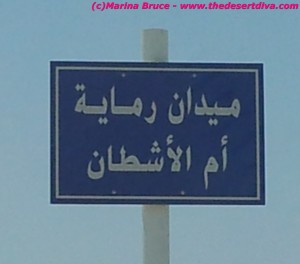 After sitting on the fence for years, a situation made me decide that I definitely had to take the plunge.  I wanted to pass through a gate deep in the desert which led to a military area.  There was nobody about at all but I was a little nervous about driving through- the sign could have said “no admittance to the Desert Diva” for all I knew – and I wished so very much I could decipher it!  In the end I posted a picture of it and an appeal to facebook and a few of my Arabic speaking friends enlightened me –

I already knew Adib’s lovely wife Diana and had heard of their classes so as soon as I got home I signed up!

When I  started learning with Adib, in a 20 session block, 2 per week, he showed the four of us in the class  how to read and write in Arabic.  Some letters are easier to learn than others, so rather than working our way through the Arabic Alphabet consecutively, he started with the easier ones and left the complicated letters until the end of the block.

It wasn’t all textbook work; during this block we also learned many Arabic words which were a good foundation for the next block which covered verbs and present tense.

As Adib works through his coursework, which he has developed himself, he throws in many anecdotes and cultural information.  My favourite class ever was near the end of block two where we all brought some food to share for the class but had to offer it and accept it using some of the Arabic we had learned!

Learning with Adib is fun, it turns out I knew quite a few words before the class but rarely had the confidence to use them!  I had also picked up some “sanaiya” (industrial area) words which are equivalent to slang words that you would not use in “good company.”  Though it’s useful to be able to say “Sawi Tarteeb” (do your best) to your car repairer in Sanaiya – and Adib helped me sort out which ones were which!

Of the coursework I particularly love the little video stories he creates in block two.  He has a great sense of humour and learning is always so much easier when you are enjoying yourself!  The two main characters in his stories, Saif and Mousa have all sorts of adventures which create conversations we can review again and again as all the class participants have them recorded on their phones!

If you based in/willing to travel to Al Ain and are seriously thinking about learning Arabic, get in contact with me and I will put you in touch with Adib and Diana – you will be glad you did!

*Another good reason to learn is that when you interact with Nationals here they will warm to you if you attempt their language.  I was invited to a ladies’ majlis in the desert where some ladies spoke a little english so using both languages we were getting along very well.  However I couldn’t get them to understand that my husband worked on Das, rather than Yas, Island, so using my finger I wrote it out in Arabic on the tent’s sand floor!  The ladies were amazed I could write Arabic and this got me many brownie points and they were very open after that giving me a chance to learn more of their culture (the pearls in the title!). 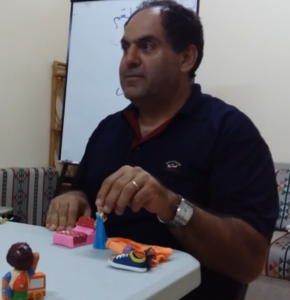 Footnote – I wrote about Adib in the Oasis Living Magazine back in April 2015 – find out more about him by reading the article here – Adib Article Oasis Living April 2015.