Mike Nott, author of Advanced Off-Road Adventure Routes UAE & Oman, kindly included a couple of routes of mine in the second edition of the book.  Here is the story of the original recce trip for one of them which was originally printed in OutdoorUAE magazine back in January 2014.  Most of the photos are by Vicky Zavros who has her own wonderful blog – Travels In The Middle East and Beyond. 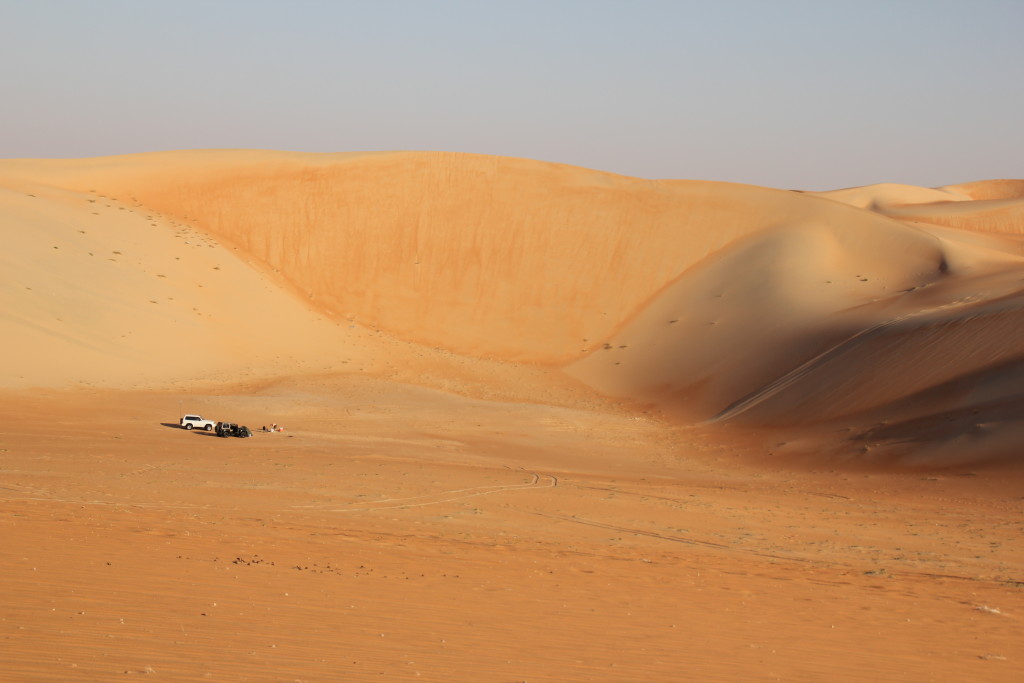 Think of Liwa and most people imagine huge dunes, massive slipfaces and sabkhas peppered with oilfields and other restricted areas.  However the other face of the Liwa is remoteness, dark skies with no light pollution, and the chance to do some really long and varied driving.

It was time to explore the most distant part of the Liwa desert – the southern part of the Magrib Sands, and I was lucky to have a sterling team comprising Mark, Andrew and Andy to support me on this scouting trip into the unknown.

Arriving late on a Thursday afternoon, we camped near the Ghayathi Road, which incidentally has to be the quietest dual carriageway in the Emirates, ready to make an early start in the morning.  The planned route took us eastwards to hit two plantations in Mike Nott’s “Adventure Routes” book, then south and east to the “corner” of the UAE before returning to the Ghayathi Road a little north of our start point.

The straight line distance was around 170kms and all cars carried 40 litres of extra petrol – the area is so remote drivers have to be completely self-sufficient. 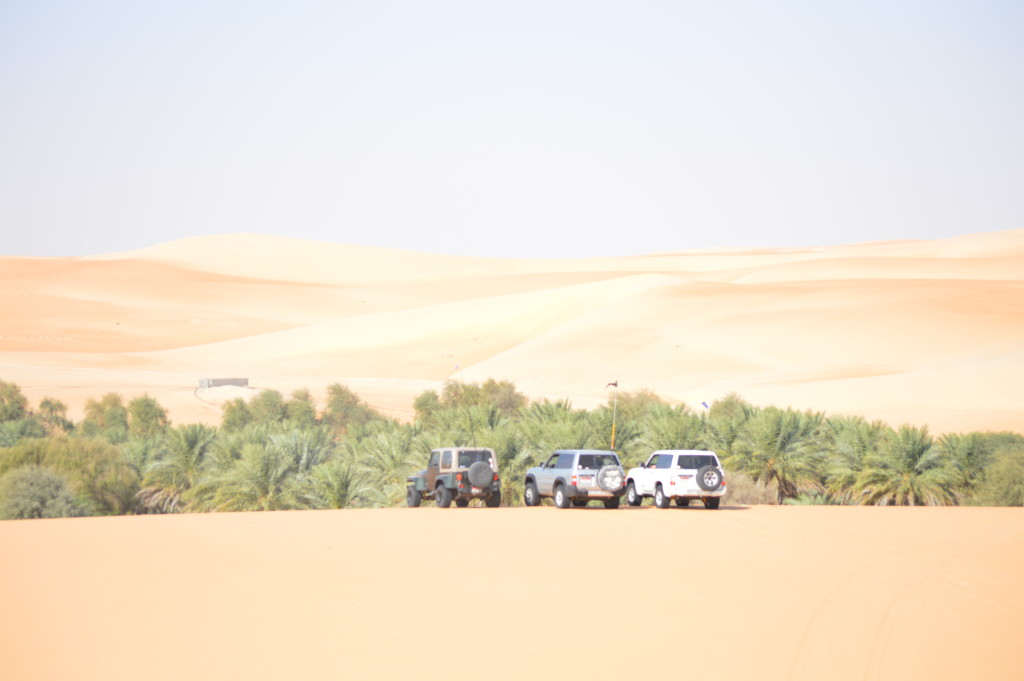 The four cars made easy work of the smooth medium dunes between the road and the first plantation, which is tucked into a bowl under a huge crescent slipface.  Pausing briefly we said hello to the farm workers before continuing to the next plantation via a faint sandtrack and after photos we pressed on to our third waypoint which was our cue to turn 90degrees south.

The next part of the route – a long and wide plain, so typical of this area – was a joy to drive.  No need for convoy formation here – in many places the flat sand was so wide our four cars could drive side by side at 80km/h as we moved towards a huge communications mast which was the point where we had to turn 90 degrees east. 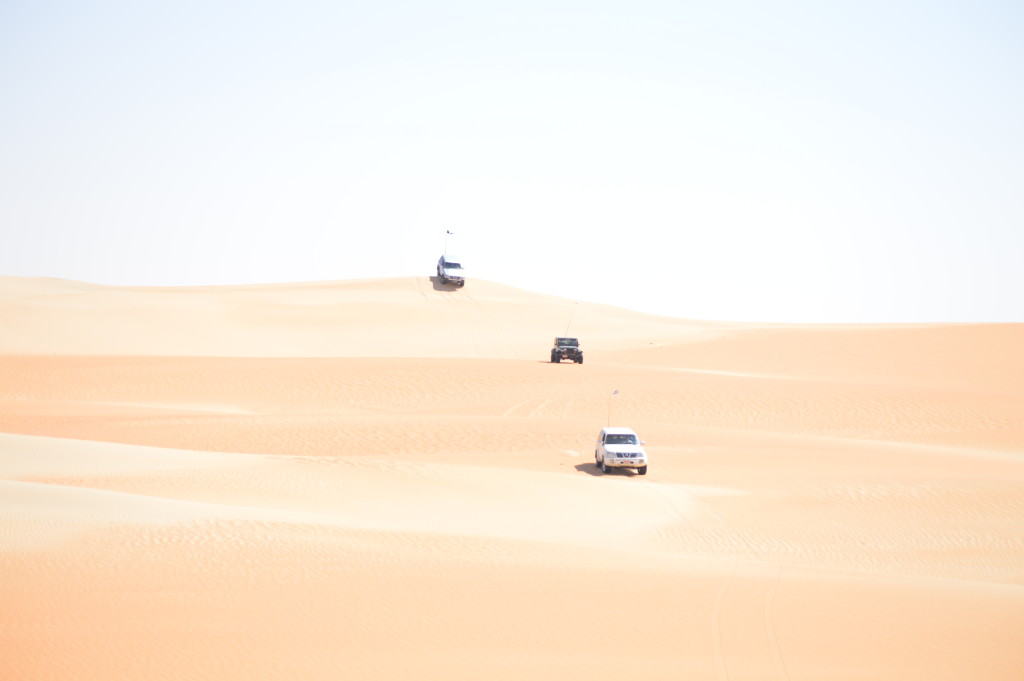 Staying mostly 2-3kms north of the border fence – there is a blacktop road runs alongside it but this is to allow the border guard access and civilians should not drive along it – we tackled some short dune line crossings which were interspersed with plains and we were surprised to see some had lots of small plants and bushes covering them. The driving was relatively easy with very few tricky bowls and slipfaces, but the sand was very soft and we had to choose our path carefully to avoid multiple stucks. 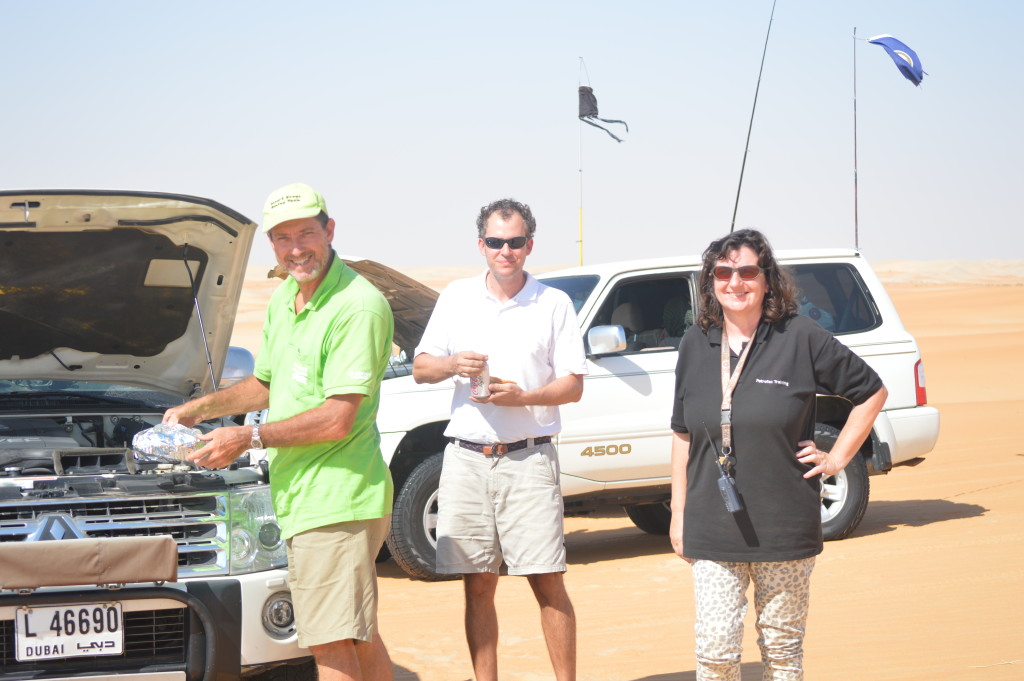 We feasted on hot pies for lunch when we stopped approx. 1km from the most south westerly point of the UAE, and wondered when the last people, other than the border guard, had been in this area.  There were no other tyre tracks, no farms, no camels and no rubbish!  Vicky did manage to snap a Houbara Bustard which legged it when it saw our convoy coming! 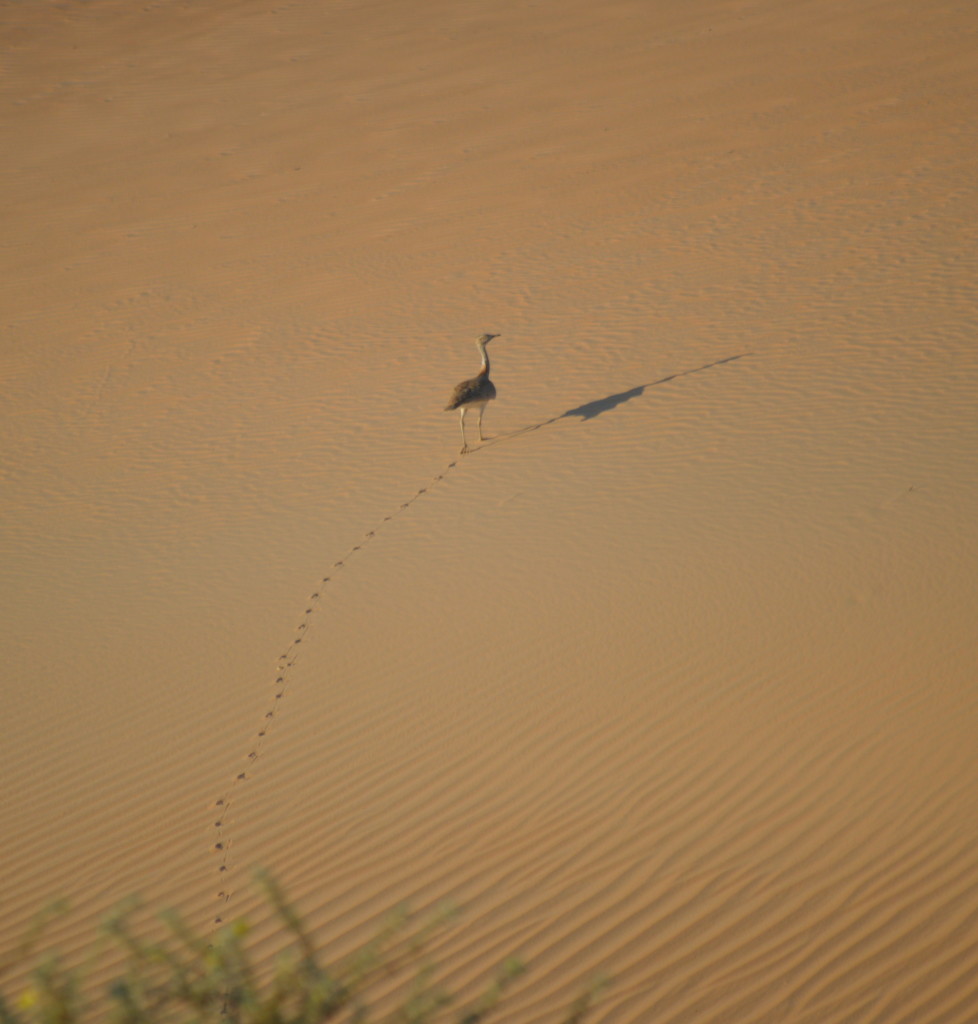 On the return leg we had a fast and easy drive north with the sun behind us, making the most of some plains to eat up the kilometres as half of our convoy needed to be back on the Ghayathi Road before nightfall.  After stopping at an old water tank, our route took us north past a solar-powered telecoms mast followed by a plantation which has featured as a Desert Challenge waypoint in the past.  From here we continued on a previously unknown sandtrack, thinking we would be back to the blacktop before 4pm, but our hopes were dashed when the track stopped at some very soft, technical white sand dunes.  One thing I’ve learned from my desert forays over the past five years is that white sand is invariably supersoft, whether it be in Oman, Sweihan or Liwa, and we had more refusals and stucks here than we had for the rest of the day. 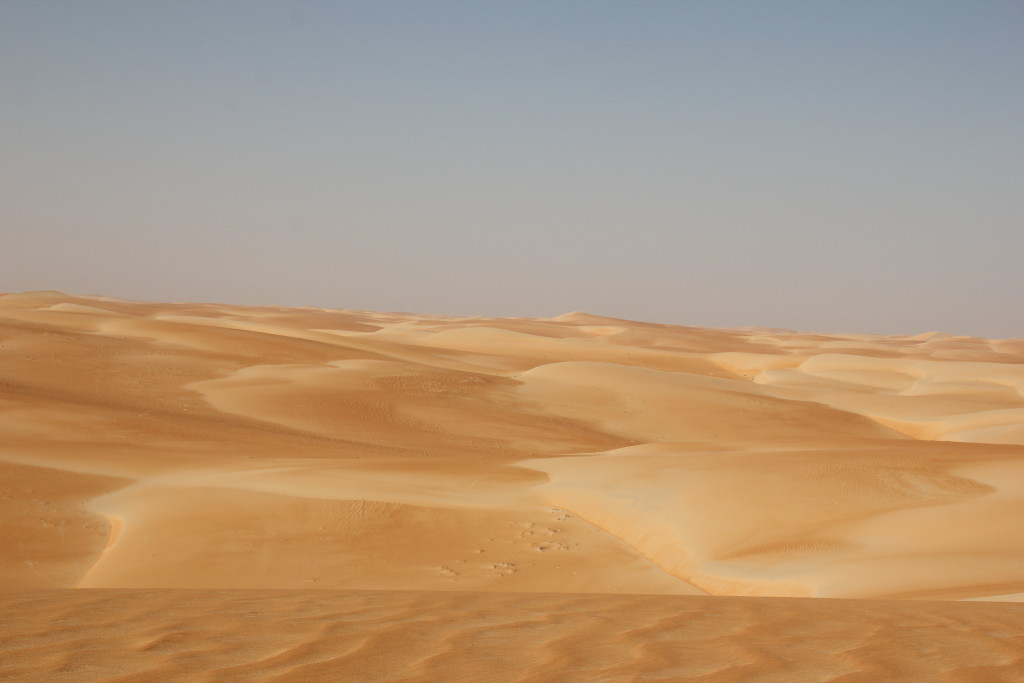 Thankfully our group managed to forge a path through them which led us to a busy sandtrack and ultimately to the Ghayathi road, just in time to watch the sunset as we re-inflated our tyres.

The aim of the weekend trip was to create a long route at intermediate level, something we had almost achieved on our first day.  Mark and I returned to the desert on Saturday hoping we could find an easy path back to either the plantation or communications mast and we were pleasantly surprised how easy the task was. 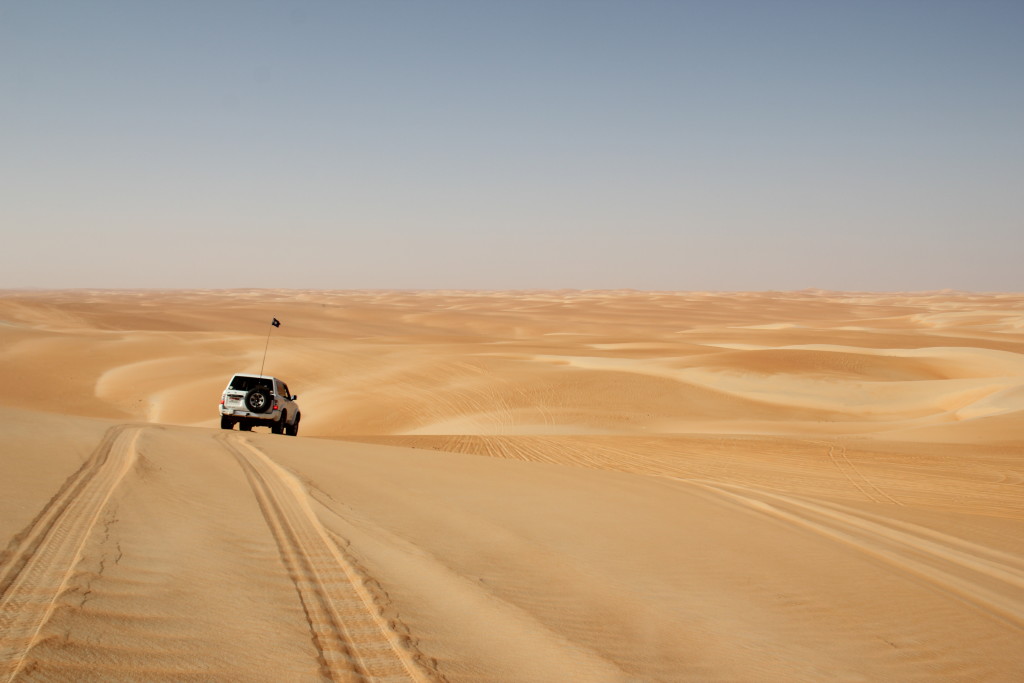 We located a major sandtrack south and with one eye on the dunes and the other on the Birdseye Satellite Imagery downloaded onto my Garmin Montana, we managed to turn off on a faint track heading in the correct direction.

There are tracks all over the desert, some incredibly well used, and others very faint; often they are marked every kilometre or so, or at least at dune line crossings by a pole or an old tyre.  This helped us to stay “on track” whilst traversing some short dunelines over to our previous day’s route and it’s good to be aware of this practice should you ever need to leave the desert over an easy route with a broken car.  Generally old tyres aren’t abandoned randomly in the desert – they normally mark something. 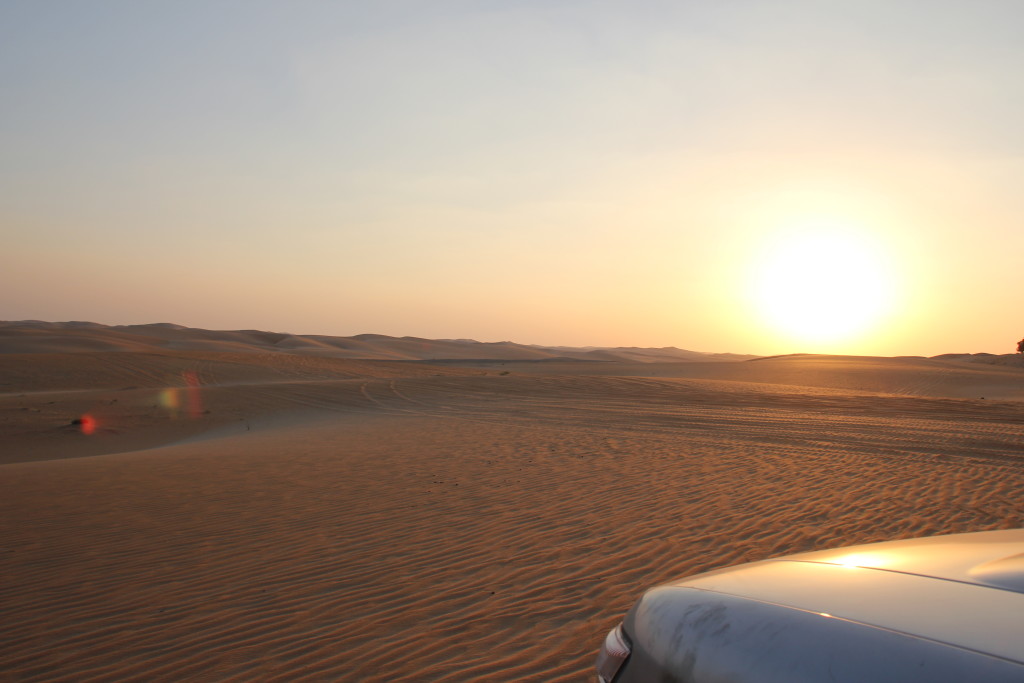 Our adventure wasn’t finished yet – we were both desperately low on petrol, in my case so much so that my car was stuttering every time I attempted an incline on the sandtrack.  Mark managed to find an alternative, more level path so I could continue and on the one rise that couldn’t be avoided I took a run at it taking some air below all 4 tyres as I cleared the top.  Moral of the story: if you think you will need 40 litres of spare gas, take 60 just in case!