My favourite book covering offroad in Oman is the now 10 year old “Off-Road in the Sultanate of Oman” by Jenny Walker and Sam Owen.  The past 10 years have seen a massive road building programme all over Oman and many of the routes are now tarmac, or simply blocked off by embankments, however for ideas and inspiration, it is still my “go-to” book. (Available in some local bookshops as well as second hand through Amazon – ISBN 1860631649). 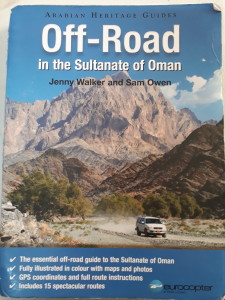 The second drive in the book is titled “Five Forts Drive” and as it starts in Barka, where we reside these days, and takes us up into the foothills of the Hajar Mountains it seemed like a good one to tackle to get away from the coastal humidity we have in July. 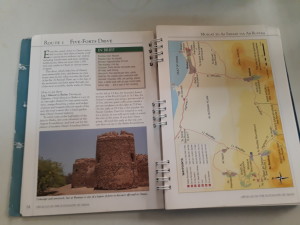 Note – please click on any of the gallery photos to see it in larger format.

Leaving our villa at 7am, we decided to miss out the first two forts near Barka, to allow us to spend the morning in the hills before the temperatures rose above 40C.  Now I did say I just use this book for ideas, so our first fort was one not on the subscribed route, Bait Al Ghasham. Following a brown “tourist” sign we came across this historic dwellinghouse (not technically a fort) but it looks very impressive.  Re-opened in November 2016 after a 5 year renovation program, it has an interesting museum area as well as being a venue for musical performances, art exhibits and the like.   The local guide actually came out to meet us in the car park to invite us in, but as we had the dogs with us we made do with a walk round the (huge) perimeter, stopping to say hello to some local farmers with their newly harvested dates – but we will be back! 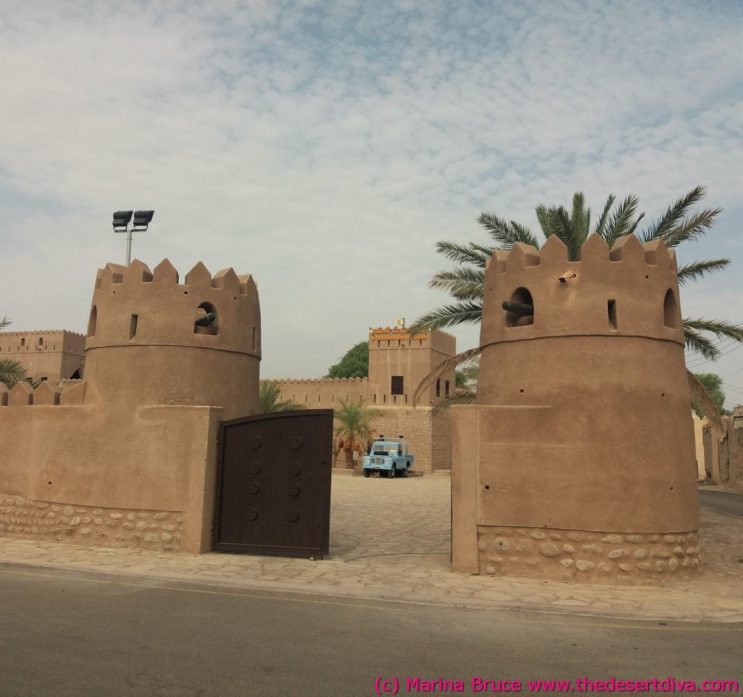 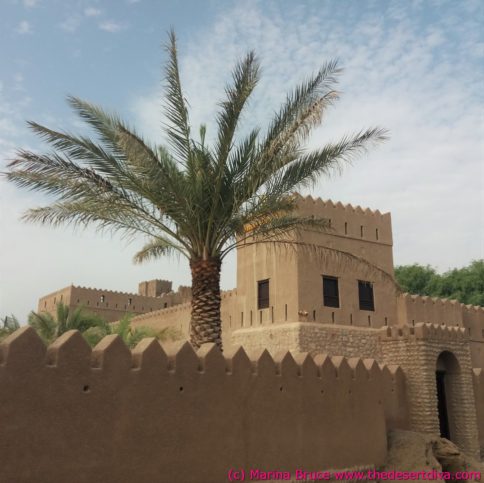 Our next stop was indeed a fort, Hisn Alsifala, but as it is only 400 metres from the last one we didn’t stop – in fact I even forgot to take a photo!  Here’s a google earth view instead 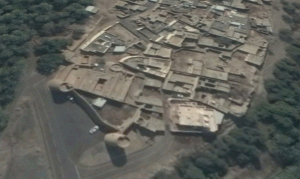 Returning to the road, we pressed on to our originally planned first stop – the wonderful fort at Nakhal.  Except that we were there just a few months ago, so we didn’t get out of the car there either, but here’s a photo from our previous visit 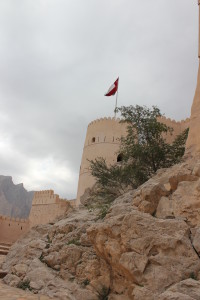 We did stop in Nakhel for a break – we wandered along the wadi leading to the hot springs, Nakhal’s second most popular tourist spot.   Salukis aren’t known for their love of water but they soon found that water, even hot springwater, is cooler than rocks and to our surprise there were huge numbers of fish splashing around in the pools. 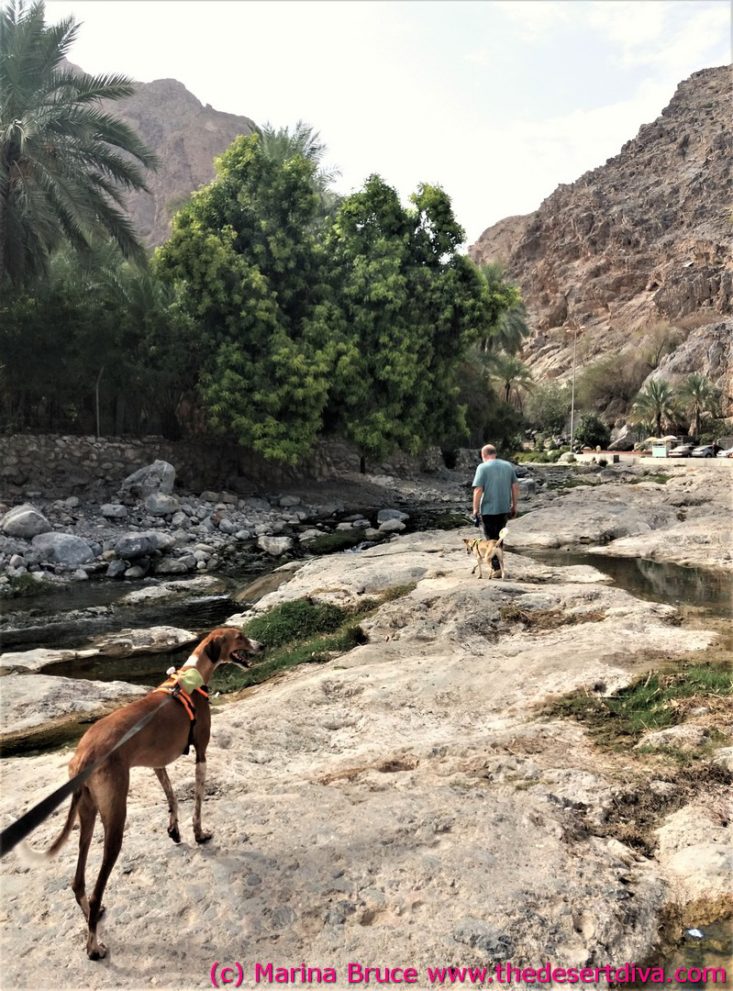 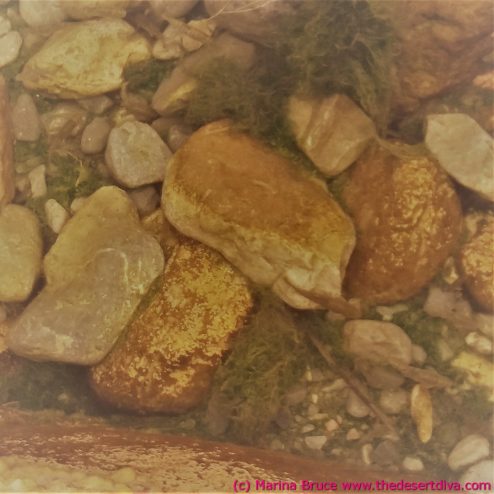 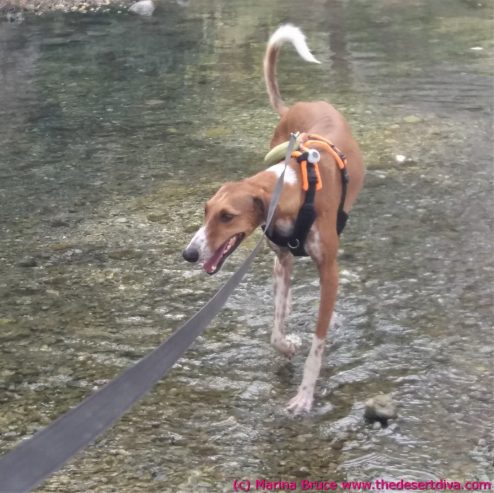 I have recently changed to BF Goodrich KO2 tyres; having run pirelli scorpions for 7 years which were ideal for sand driving, I found they were far too soft in the sidewall for wadi and rock driving which necessitated a change to more robust, all purpose tyres.  We spotted water in a wadi so detoured so we could grab some pictures for this blog 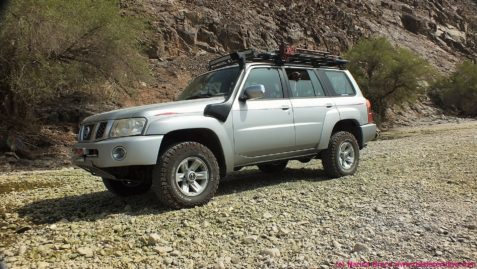 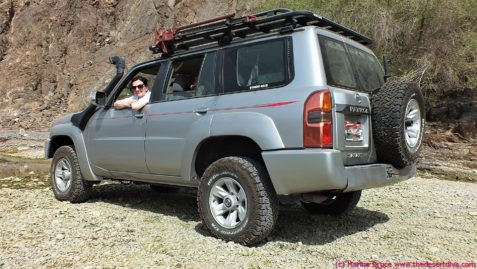 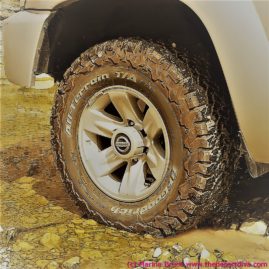 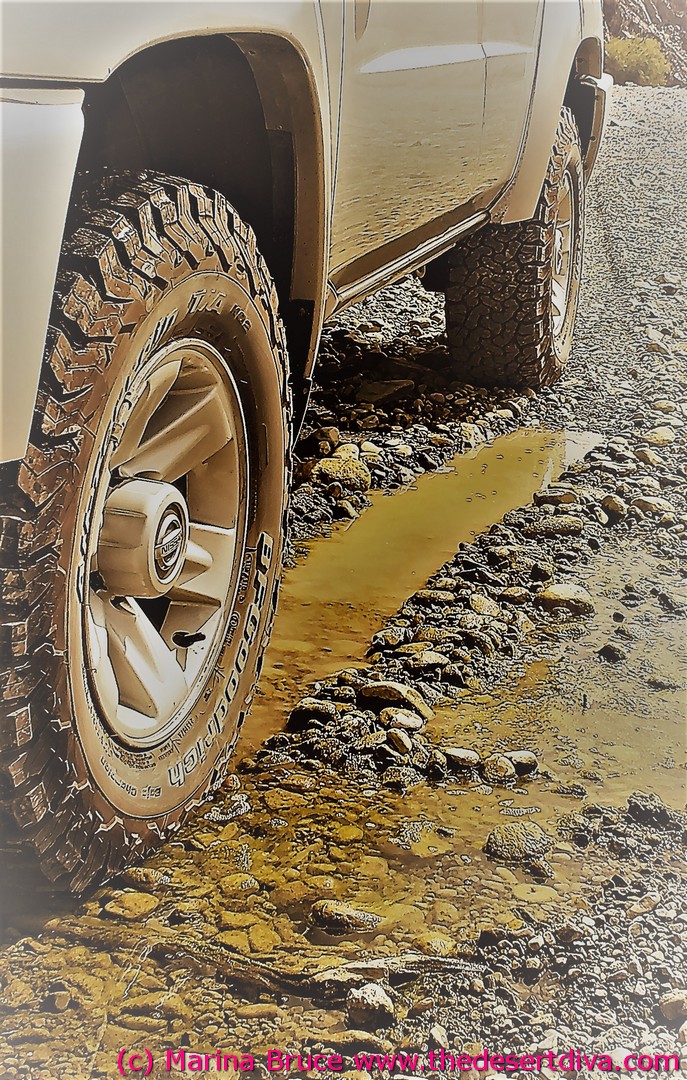 Just a little further along the road we found another chance to offroad – we hadn’t a clue where we were heading but it looked interesting and we had plenty of time.  A graded track, somewhat rough in places took us to a plain behind the mountains but apart from a disused farm and a seldom-used shooting range there was nothing there but scenery. We thought we might be able to return to the road as my garmin was telling me there was another track out to the blacktop only 300 metres away.  It might as well have been 300 kilometres away as between it and us where some deep gorges with no way across, unless of course you were a goat or a donkey. 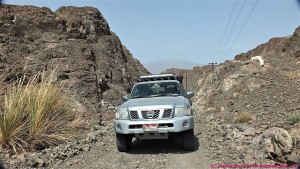 We returned to the route in the book, spotting the watchtower on our left as we cruised past on the new road approaching Rustaq….. so as to ensure a decent count of forts, castles and towers we backtracked a little so we could snap it, then drove in to central Rustaq on the old road, stopping for a photo or two of a working oasis farm 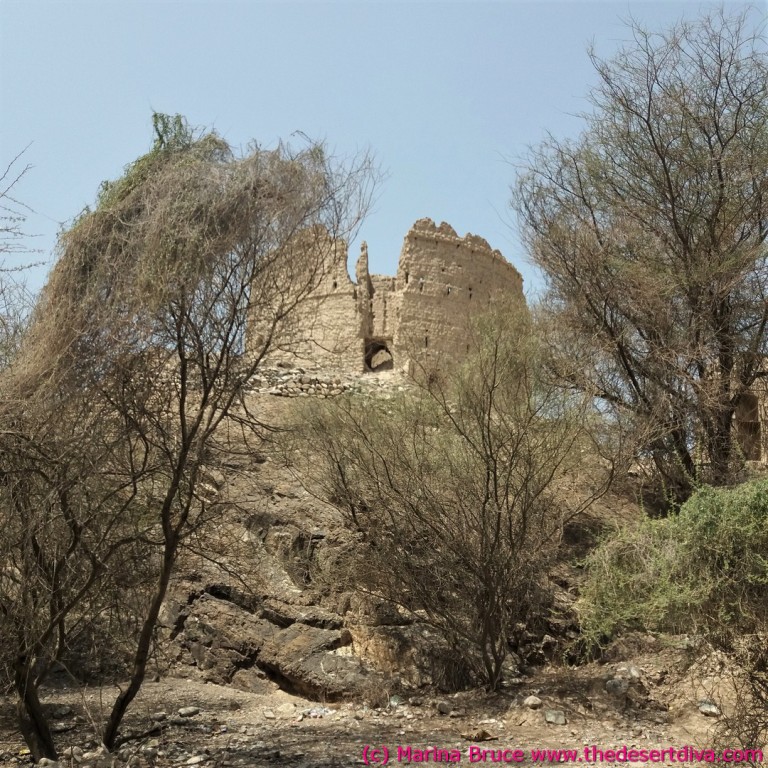 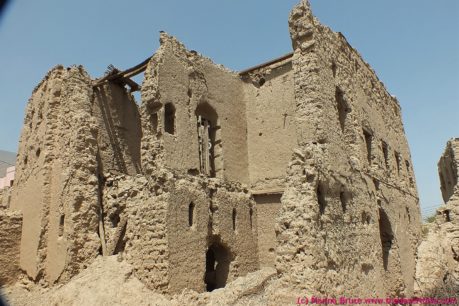 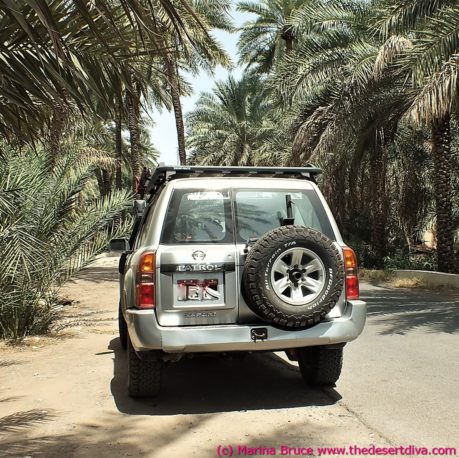 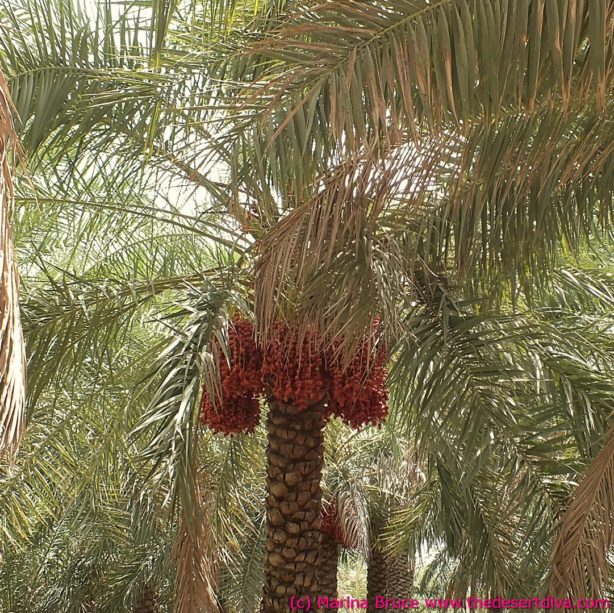 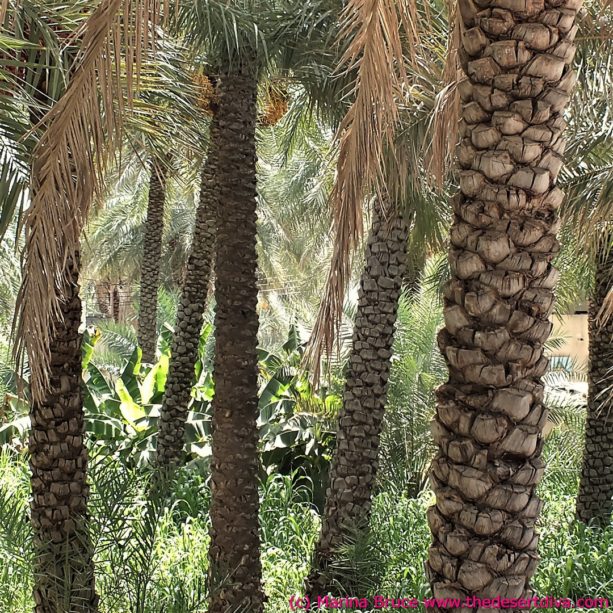 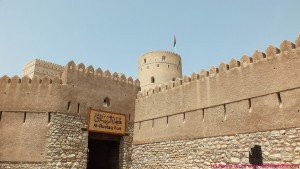 The next challenge was to find the entry to Wadi Bani Hinay off the new road, which was surprisingly easy.  This section of the route is the only real compulsory off-roading we encountered, and what a drive it was.  The first 3 or 4 kilometres are a relatively smooth drive over a wadi bed, with a few big rocks to avoid, date plantations and small villages lining the sides, workers going about their daily business and a HUGE GREAT AWESOME RUINED CASTLE bang slap in the middle of it!  The photo of the fort in the book does not do it justice, the ruins are quite spectacular – also pictured in the gallery below is the remains of an old watchtower, high on the hill. 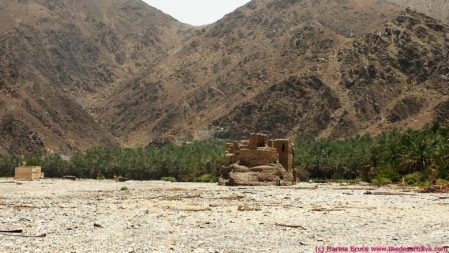 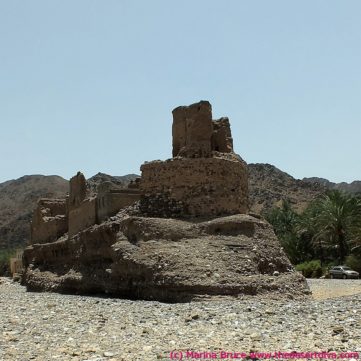 We continued further up the wadi and as it was getting rougher we tried to exit via a nearby village – boy were those streets narrow, definitely not built for a Nissan Patrol! 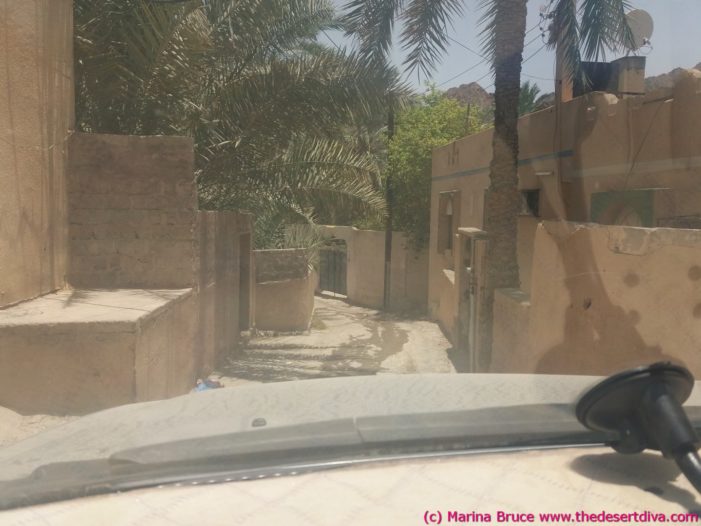 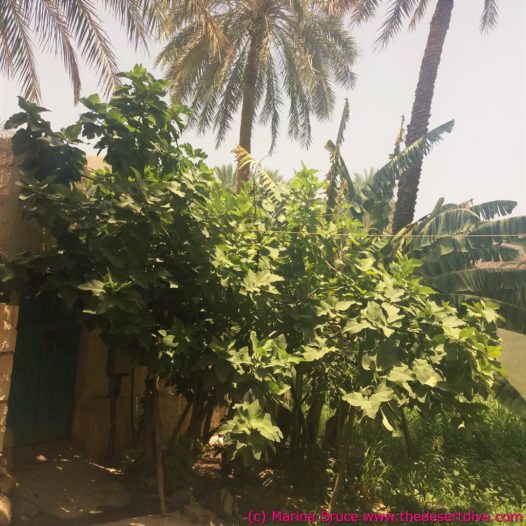 We returned to the riverbed and followed it for another few kms but it was hot and one of the dogs was a bit poorly, so we found an exit next to a bridge, drove up a terrifying steep slope and returned to the road, heading home using the new section of the Al Batinah Highway.  We will be back – the wadi entrance is only one hour’s drive away from Barka – starting early in the hope we can forge our way right through to Hawqayn, and to the two forts near the end of the published route.

So what of the two forts we missed at the start?  Well, we got up early the next morning and visited the Barka/Rumays part of the route – Barka fort is reachable by road with Sur Al Rumays just a 5 minute drive from Road 1, with the final 200metres being graded track.  Barka fort does not appear to be open to the public at the moment and as it is situated next to the fish and vegetable market it is not somewhere we wanted to stop for long.  Just a 10 minute drive took us to Sur Al Rumays, hidden from view behind some modern housing; the old ruins are in quite good order and it is definitely worth a visit. 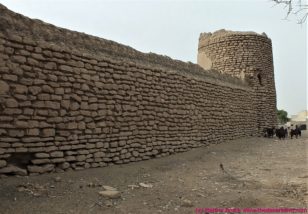 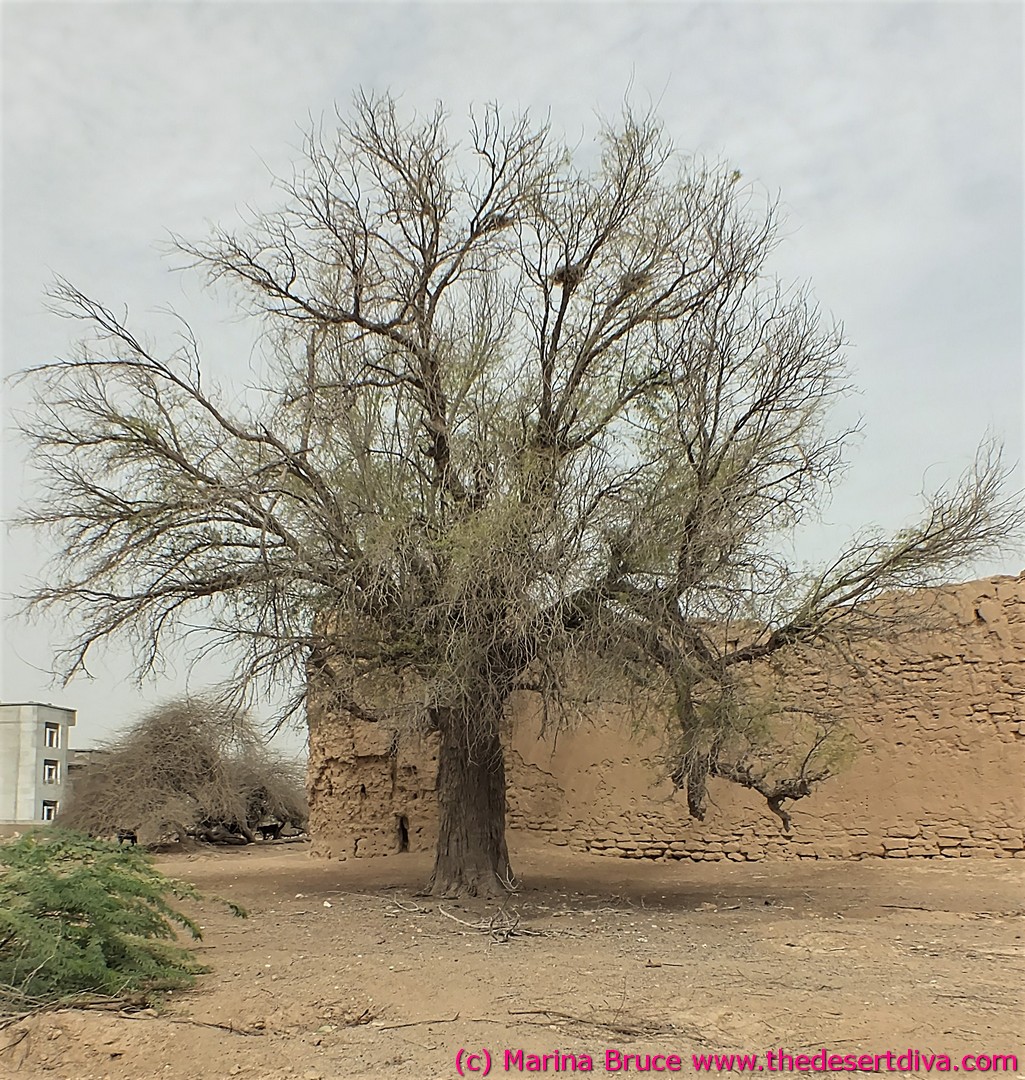 Our scores for the weekend

Total distance – around 260kms round trip from Barka. 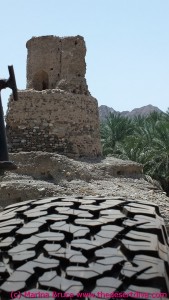 Food/drinks – available from petrol stations, small grocery stores and there are large supermarkets at Rustaq