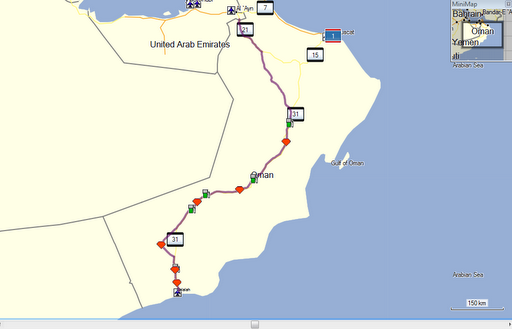 The Journey from Al Ain to Salalah

How far is it?

According to google maps, it will take 10.5 hours to drive with no stops and not counting border crossing formalities, should you take the inland route.

Details in my blogpost – The Road and The Miles To Salalah

Also, here’s the trip report from our first onroad journey to Salalah

Which border should I take?

Will I get a Visa on Arrival?

GCC residents with approved professions (and their dependants) as well as nationals from Oman’s List 1 can still receive a VOA.

Is there any benefit in applying for an e-visa?

There is certainly no harm in doing it as it saves paying at the border – I feel sure at some time in the future it will become compulsory.

Applying for an Oman e-visa 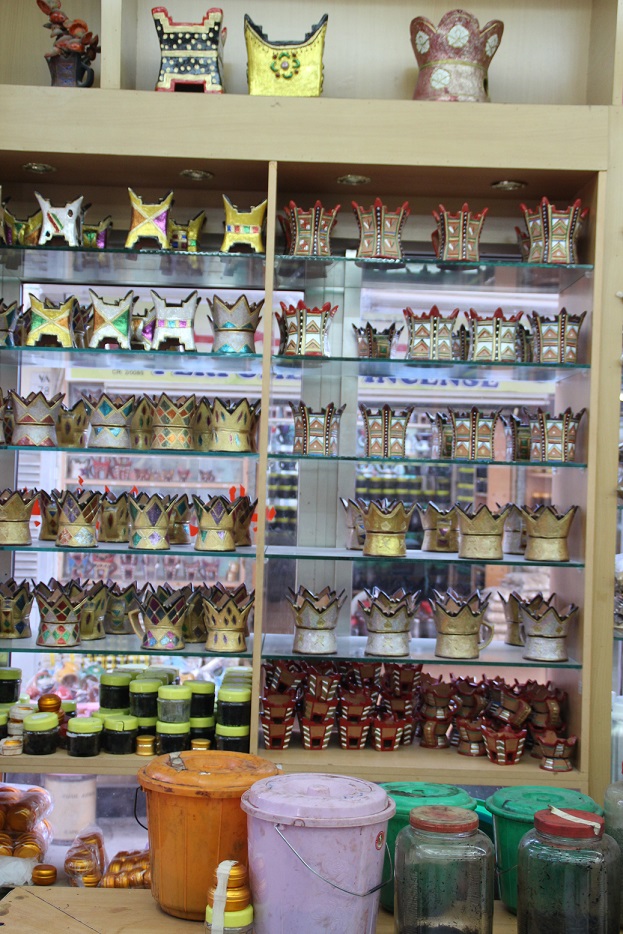 Do shops in Oman accept AED?

Will I get phone signal or data when travelling?

Yes! Good signal on all the main routes south. 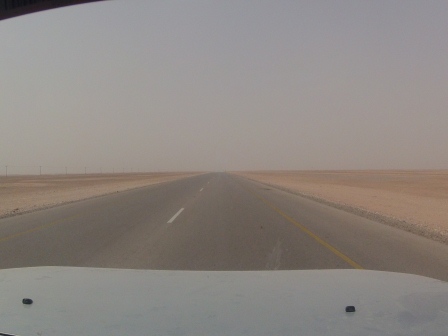 How are the roads?

Oman has invested a lot of money to improve its road system and they are much better than they used to be.

As with most roads, it is normally the drivers who present the main danger.  People driving long distances without taking enough breaks  and falling asleep – the sides of the roads are sometimes littered with burn out car wrecks.  To combat tiredness I recommend a 15 minute break every two hours, or better still, have two drivers in the car and swap regularly.

There are sadly many accidents on the inland road #31, often trucks and buses seem to be involved.

After a sandstorm in the area south of Ghaftain, you may find small dunes over the road – trust me, it will not be a good thing if you hit them at speed, so be vigilant.

As I said above, the road is mostly unlit and two-way, and this takes some getting used to if you have driven exclusively in the UAE for a period of time. If you have to make the journey in one go, then I would leave the UAE about 1am (the border should be quiet then too) so that all the driving in the dark will be on dual carriageways. 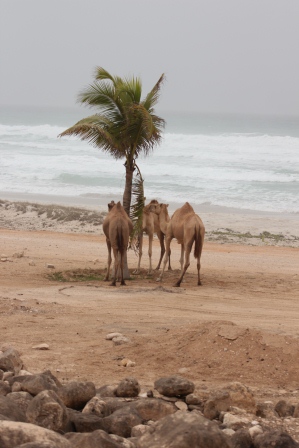 Is that the only road?

No, there is an amazing coastal route from Muscat to Salalah – it takes a bit longer but there are more places to stop and it will be cooler at the coast. 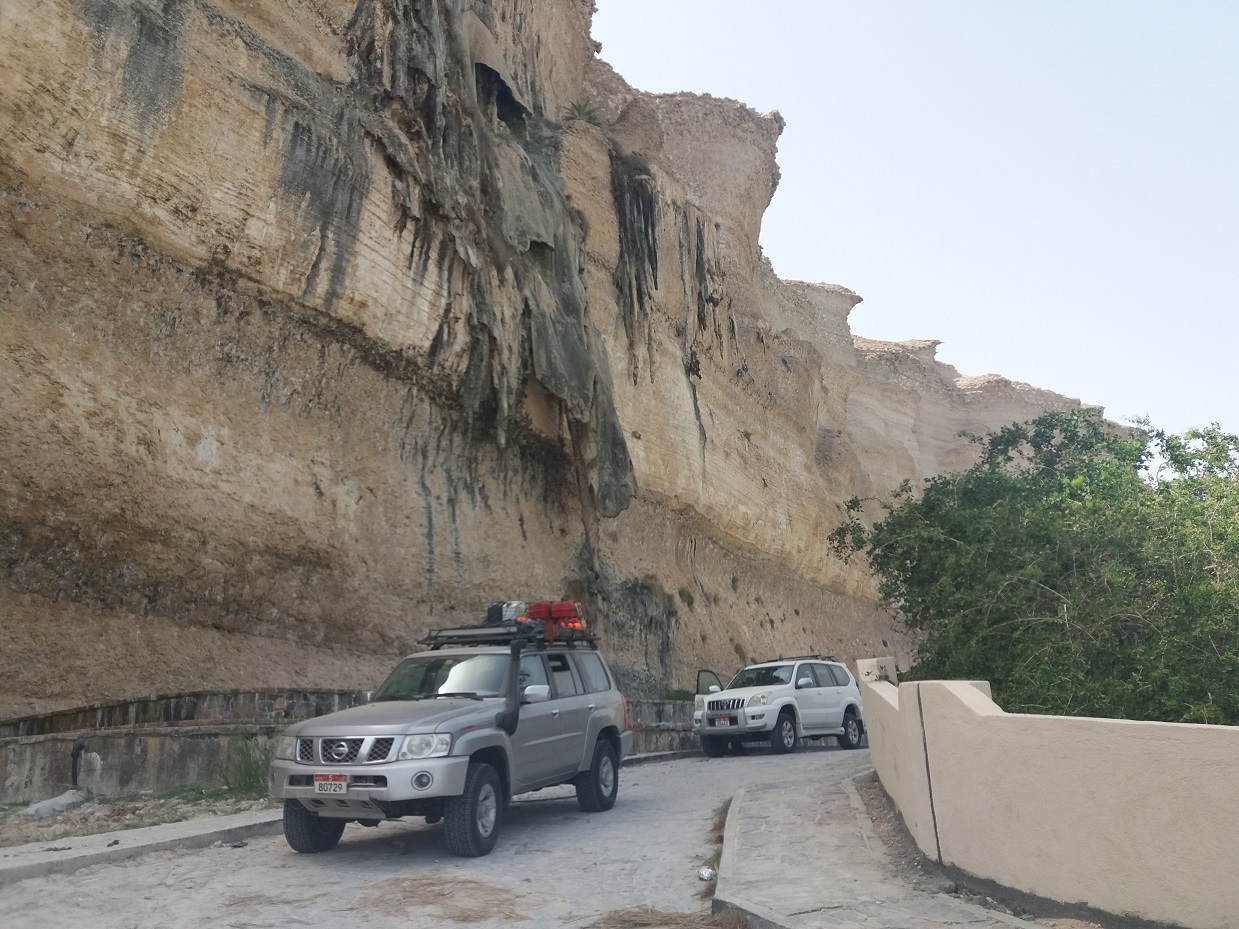 No need – unless you plan doing some offroad when you get there.  2wd cars are often lower and more stable than high 4x4s so do not feel disadvantaged in a low car.

Whatever you drive, ensure it it well maintained – maybe even get it serviced just before you go.  At one point you will be about 300kms from the nearest repair shop so it makes sense that your car, including your tyres and spare wheel, are in tip top condition.

Photo taken at Hasiq waterfalls – water will be cascading over these during the Khareef.  4x4s shown as that is all we have got!  Extra petrol cans on top as we were heading to Ramlat Jadilah, 400kms into the Rub Al Khali from Salalah! 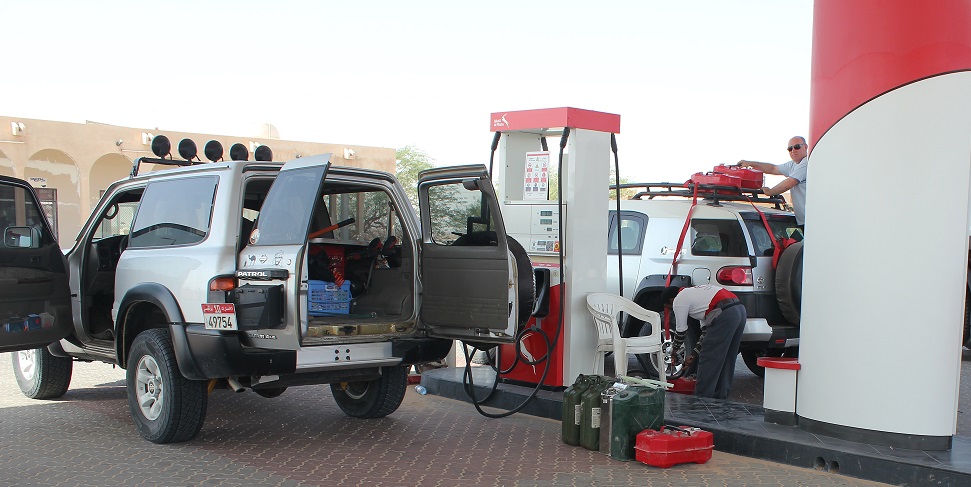 Do I need to carry extra petrol?

There are plenty of petrol stations on the inland route – details on The Road and Miles to Salalah link above.  That being said, very occasionally at peak times some petrol stations may run out of fuel, so I suggest you refill every time your petrol tank is 1/2 full.

There are enough petrol stations on the coastal route too, but be aware that not all accept credit cards.  Ensure you have enough cash to pay for a couple of tanks of petrol!

The photo above was taken before one of our Rub Al Khali (Empty Quarter) forays, when taking extra petrol is a must! 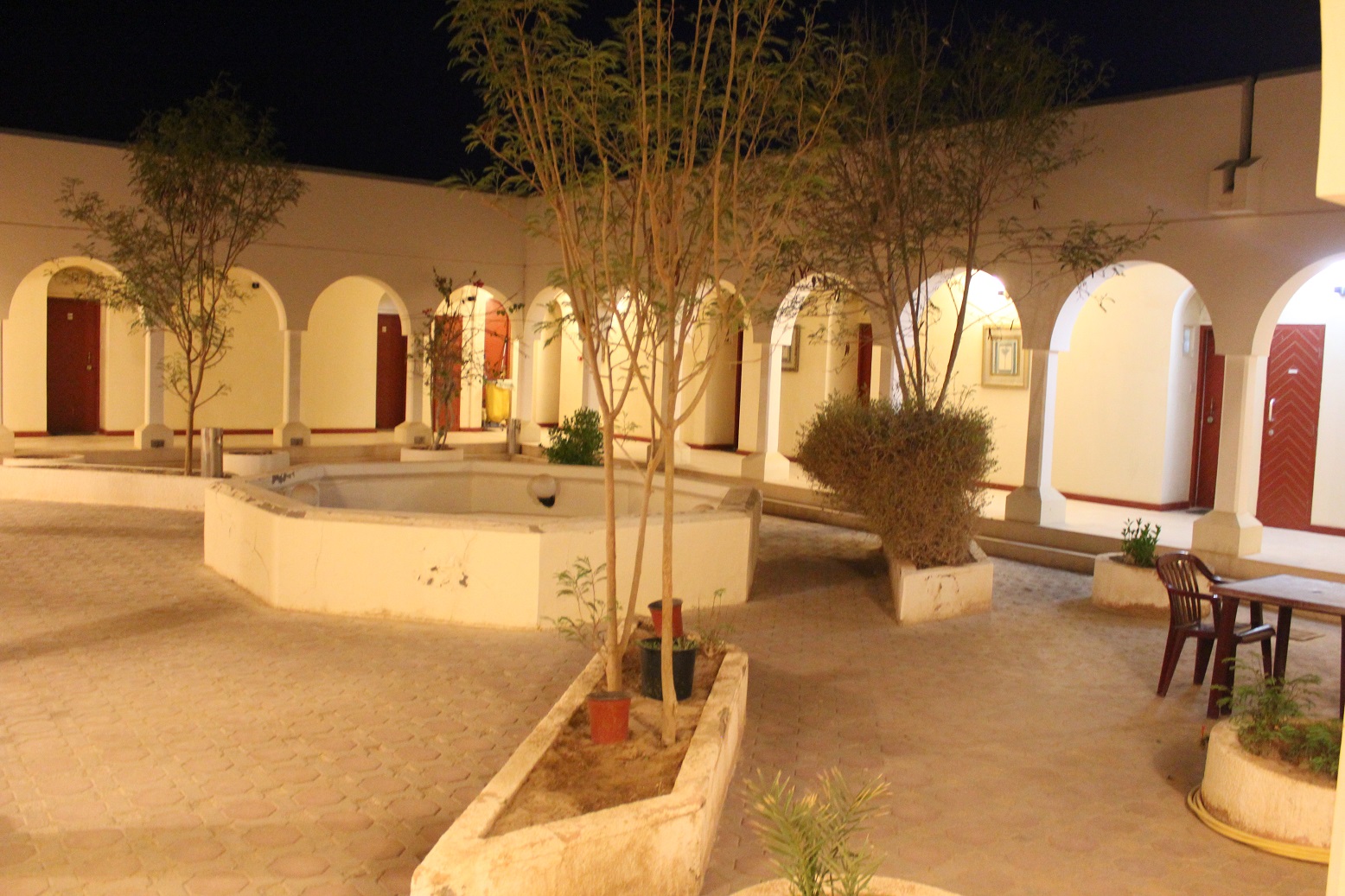 Can we split the journey by staying overnight somewhere?

Yes great idea!  There are some resthouses on road 31 as well as a couple of small hotels in Haima.  The resthouses can be somewhat basic though.

If you opt for the coastal route there is a Crowne Plaza as well as a Park Inn at Duqm.  There is also a smaller local hotel called the City Hotel, as well as others in Mahoot.

I am travelling there in August – at which point in the journey will it start to feel cool?

Would you believe – not until Thumrait, 60kms from Salalah!  The other 900kms are hot hot hot desert temperatures, which means you cannot camp mid-way in the summer or even stop, apart from at rest areas (there are very few trees and little or no shade for most of southern part of the route). 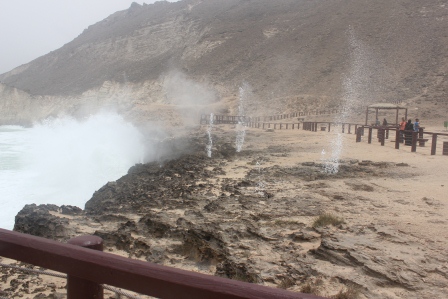 What is there to do when we get to Salalah?

Lots and lots!  Soak up the atmosphere, enjoy the cool temperatures and rain!  People watch!  Once you have done that you might want to explore a little; here are some routes I have done.  Please note that there may be some road closures in remote areas after the cyclone last month.

Salalah Route Four – The perfect square circle (my favourite, did it again in 2017!) 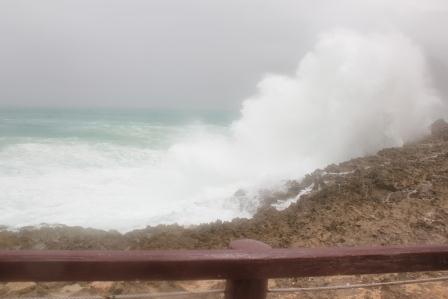 Can I swim in the sea at Salalah?

In the Khareef (June-September) – definitely not, the tail end of the Indian Monsoon reaches southern Oman and the sea is very rough and tides extremely strong.

At other times of the year – most definitely.  You might see turtles and dolphins as well as many different varieties of fish. 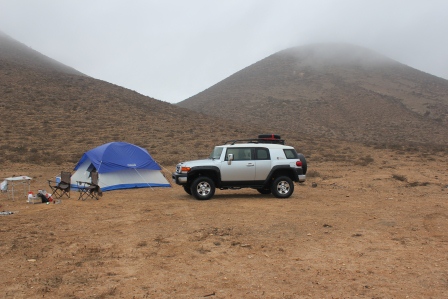 Where can I camp in  Salalah?

During the Khareef in particular, keep out of wadis and away from the sea for your safety.  There are many places to camp but be aware that once you go out of Salalah, at a certain level you will have fog all the day and night – personally I would avoid that as I wouldn’t travel such a long distance for a view of the inside of a cloud!

Keep away from military, fenced and cultivated areas.

The photo above was taken when we camped up a track behind the petrol station on Mugsayl.

From October to April I like to camp at Fisherman’s beach – you need a 4×4, not an AWD to reach it though. 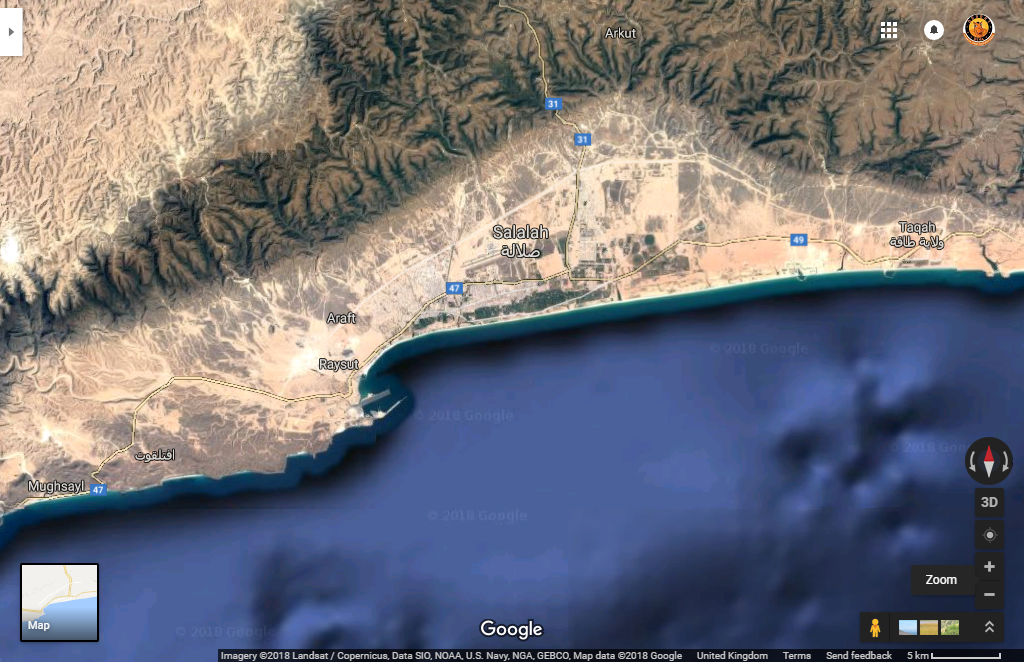 Is Salalah a big city?

It is a medium sized city with a souq, a mall, Lulu, restaurants, car washes, sanaiya etc.  You might not be able to buy everything you want there but you should be able to get what you need.

To me, it is like Al Ain by the sea – a spread out city, linked by dual carriageways lined with palm trees and punctuated by roundabouts. 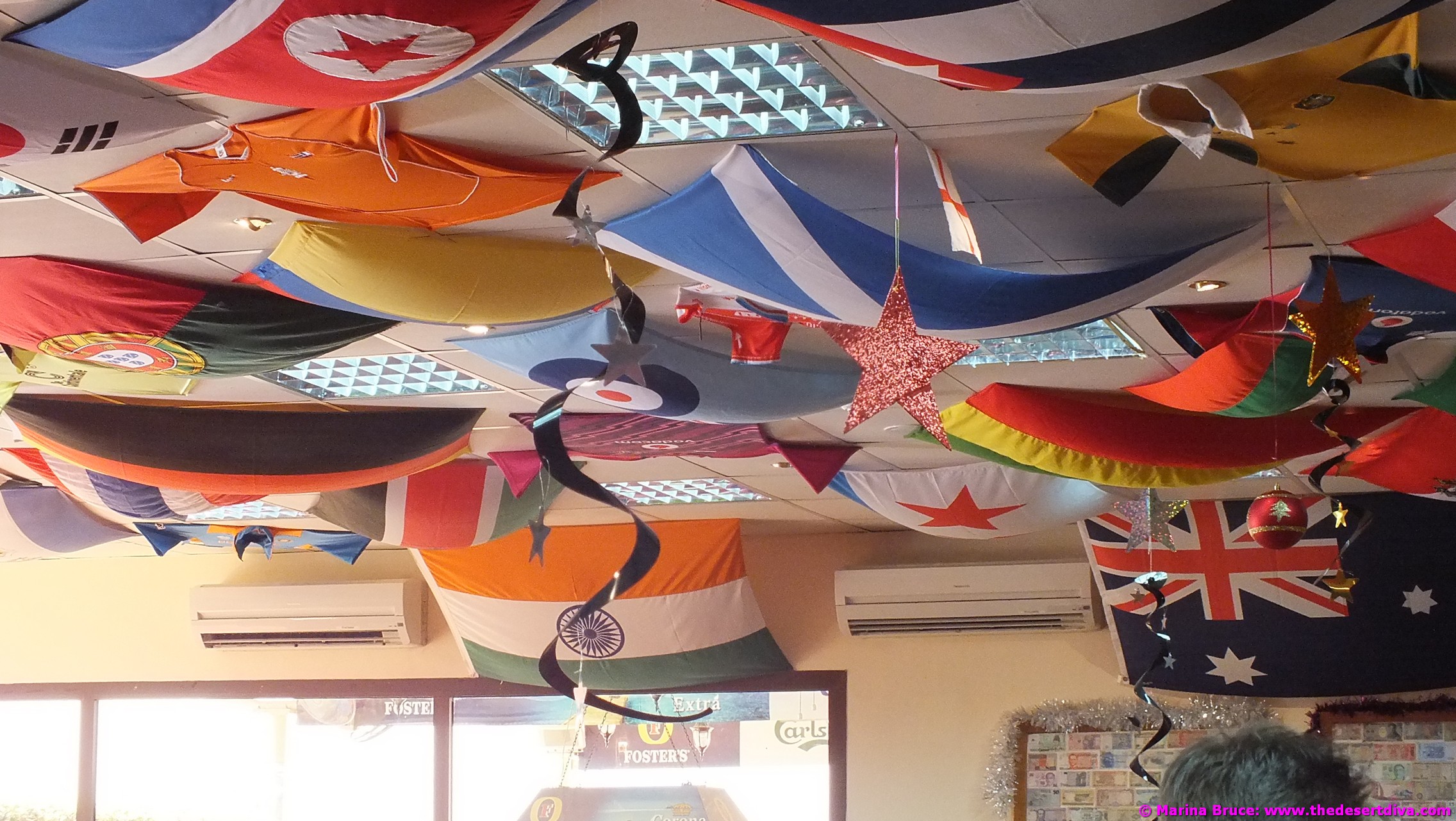 We weren’t the first Scots to discover the Oasis!

Where can you eat in Salalah?

All cuisines are catered for by a huge array of eateries – from small cafes to five star hotels and everything in between.  My tip is the Oasis Club, accessed via the port (you think you can’t go in as it is guarded by the army but it is ok to do so).   Pub style food, very reasonably priced with a good selection of grape and hop.  Tell the manager Mr Sudheer that the Diva sent ya!

Is it worth going to Salalah?

Absolutely!  We recommend every expat go at least twice (we have been five times and the urge to return is still there).  Once in the summer to experience rain and greenery so close to the desert!  The atmosphere is very upbeat and it is a joy to mix with so many other nationalities as we all enjoy a respite from the summer heat of the rest of the gulf!

One downside to all the rain is that anything above 200 metres will be shrouded in fog for most of the day and night so it does hinder exploring somewhat.  So, we always recommend a winter visit to enjoy a completely different, shyer side to Salalah.  Perfect weather (never goes below 20C), cheaper hotels (low season is Nov-Feb) and fantastic vistas which are hidden by the fog in the summer!  Check out my blogpost High in Salalah and you will see what I mean! 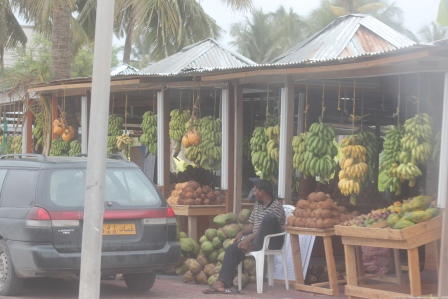 What do they do with all those bananas they grow in Salalah?

There are some things the Desert Diva does not have an answer for…and this is one of them!