This year I landed what I consider to be one of the best volunteer jobs in the challenge – driving a Eurosport Cameraman around for the week! Even better, they needed three cars/drivers so I was able to involve my good friends Mark and Wallie in this task. 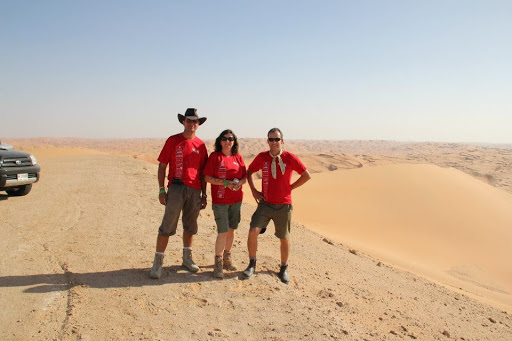 Day One
We collected our cameramen from the Centro at Yas at 6.15am 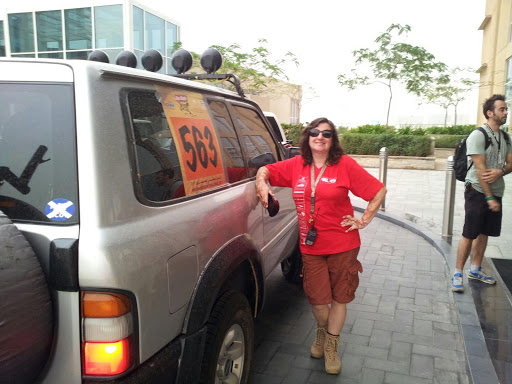 Meet Jerome, my companion for the next 5 days.

The beginning of the event was thwarted somewhat by the weather on Saturday/Sunday – thunder and lightening, rain, strong winds – made the prologue rather dusty and required the start to be delayed for over 4 hours, with the moto event cancelled for the day, and cars starting some 50kms away from the planned start.
By this time we had negotiated some very wet and sludgy sand to get in position for the cars coming through to the west of the Himeem road; this part of the route was now cancelled but thankfully we had a phone signal so we could be notified of the changes.  We were just heading out when Jerome noticed two people, or were they trees, about 500metres away. We drove over to find two photographers who like us, were expecting 100 motorbikes, quads and cars to come powering over the dunes, so we delivered the bad news to them and set on our way.  Edoardo took this great photo of me heading towards him; it was the only offroad action to happen on the morning of the first day.
Using the sand track into the plantation where the oryx and gazelle live (see previous blog posts) we tackled some big dunes on the actual rally route, all on our own.   I was going cautiously but still managed to get us into a great spot for the camera near the top of a fairly big dune.  The wind was still blowing so I didn’t dare take my good camera out but I can tell you that, of the 16 cars that came through, 8 of them had problems – these would have been the first large dunes in the rally, and for many drivers and co-drivers, this was their first outing into serious sand.  Lots of them got stuck in a bowl, having yet to discover the “shway shway” or “little by little, gentle” technique as favoured by locals (and taught to me by said locals), and it was painful to watch some of them make multiple attempts to get out. I wonder if any noticed my relatively unmodified patrol sitting atop the dune! You can watch a brief clip of the “bowling” at  6.32  and 11.41 here – shame it had to be edited, there was over 45 minutes of footage taken of the competitors’ struggle with this one bowl!
Day Two
The next day saw us at the Arada end of the Liwa Crescent, where we stayed for about 3 hours and got great footage of lots of the bikes and the first 12 or so cars.

We ended up back at the bivouac quite early, where I got a chance to go into the desert as second car  – I even managed to dig myself out of a stuck.  I am ashamed to say that when I normally need dug out, I usually put on my “hopeless female” expression and a man in the convoy helps out.  However this time I wanted to get out of this all on my own before my friend saw me and laughed at me – or even worse, started taking photos!
We then had a run up to the plateau to create some new tracks to make it easier for the first bikes to find the sandtrack between it and the Qasr Al Sarab the next day – you don’t want to stray off this particular track as there are a few huge and very deep bowls next to it. 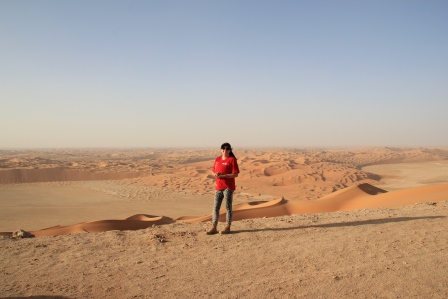 My next job was to go and tie open the Qasr Al Sarab’s grounds gate, and as I had very experienced drivers in the convoy I had a chance to let my hair down!  Those of you who were on my “Marina’s Madness” drive in Sweihan a couple of years back will get the picture, though there were no photos – everyone was going too fast.
Day Three
Next morning saw us near the Khis gatch, where we had a really good spot to take some action photos.

Once the 18thcar had gone through we then headed back towards the bivouac, via the rally route which was rather enjoyable but technically demanding in a few places since the rally cars had messed up the dunes somewhat.
We took the chance to rest for a while in the competitors’ chillout tent where I got talking to one of the bikers.   Turns out Robin is a Dubai-based Scot from Irvine, and I dragged him up to the plateau as my passenger.  A lovely American couple had turned up at the bivouac wondering what was going on so we added them to our convoy and after our visit Mark and Wallie took them to find a good camping spot.

It was my chance to thank Edoardo for the great photo he took earlier in the week; the air was clear and along with his colleagues he got some brilliant photos from the plateau and also the pool below. 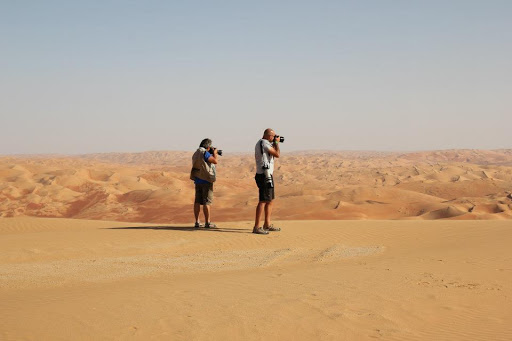 Day Four
We had a rather long drive of 177kms to the entry point for our pre-selected camera spot on this, the penultimate day of the rally.  I have to say I was sorely tempted to leave my cameraman there for an hour or two and go and drive these, my favourite dunes.  However it was possible that Jerome may wish to relocate his position, or I could have got stuck/broken down and been delayed for hours, so I sat and worked out when I would next have the chance to drive here with Neil (June I think….).

We were back at the bivouac at 3pm and arranged another trip to the plateau – this one was special as I needed to take more than two passengers and I don’t have enough seats in Xazu so I was allowed to take one of the Landcruisers.  I jumped in and wondered out loud where the key was (there isn’t one, it’s a push button), and then exclaimed “oh, it’s manual” at which point my lady passenger told me that I wasn’t inspiring much confidence! 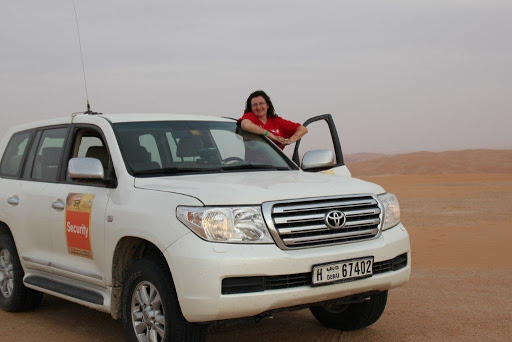 As soon as I got it to move I changed her mind though, she was blown away by the beautiful vistas and neither passenger was overly scared at the pace I was setting.  Once back at the bivouac I had another run to complete, this time with the lovely Orla, who took some fine snaps with my camera!
Day Five
An early start was required as we had to be “on the stage” by 7am.  How beautiful the sunrise is in the desert, every time I see one I say to myself that I need to get up earlier more often!  We found a grand spot to capture some footage of bikes and cars bouncing over an extremely bumpy sandtrack – however as soon as we arrived we had a visitor who came, had a look, then wandered up a high dune. 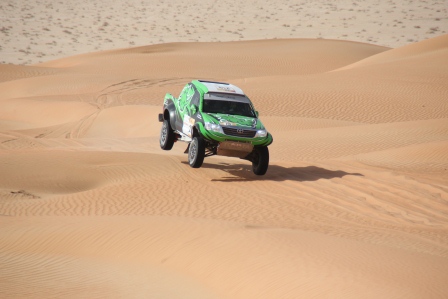 On the way back Jerome took me out to lunch – an egg paratha roll at the White Sands Café and very fine it was too.  (It cost him 8.5aed for both of us).  Once in Abu Dhabi I helped out at the event finale, where all who the bikes and cars who had finished joined the parade through the arch.

All in all a busy, tiring week, with lots of laughs, a chance to meet old friends, make new friends and drive on the best dunes in the world!  Roll on ADDC 2014!