And so once more April arrived and with it my favourite event of the year – the ADDC! For the second consecutive year I was lucky enough to be deployed as a Eurosport Driver  which I think is the best of all the “jobs” – despite early starts, lots of solo desert driving, long long stops while we wait for the field to power through leaving us in a mist of sand, you are in the thick of the action and have the chance to take some wonderful photos.

Firstly we had to prepare the cars…. Neil and Cam thought they might tell the world where the UAE’s wealth comes from! 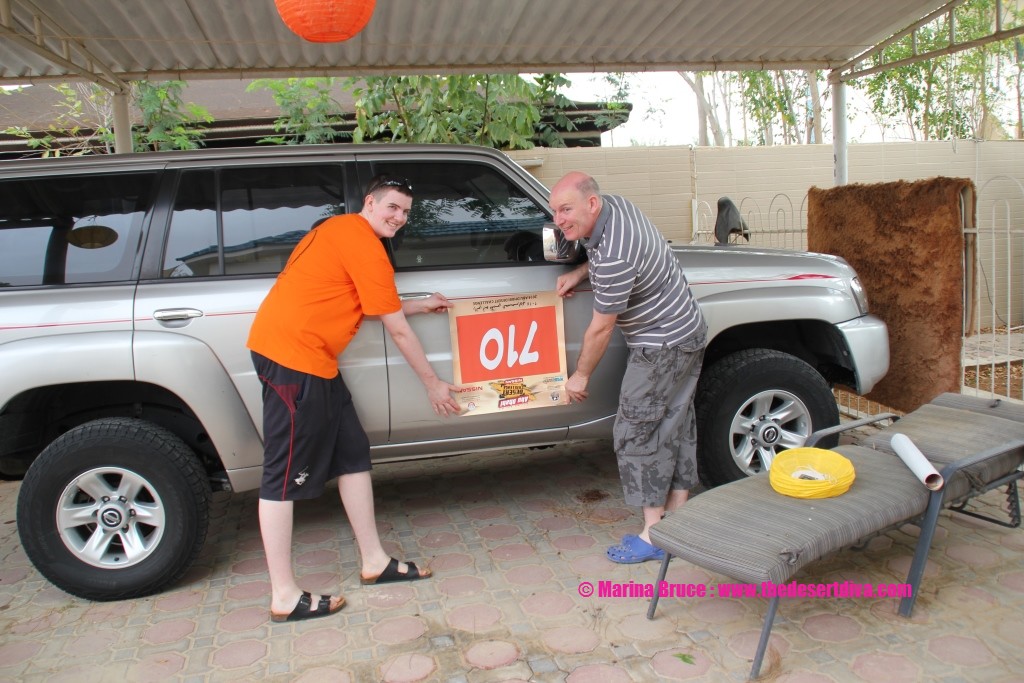 This year saw three of the Bruce family involved – Cameron wanted to come here and marshal for his 21st birthday gift from us.  Neil and Cam were manning PC (passage control) 3 whilst I got to drive around the desert. 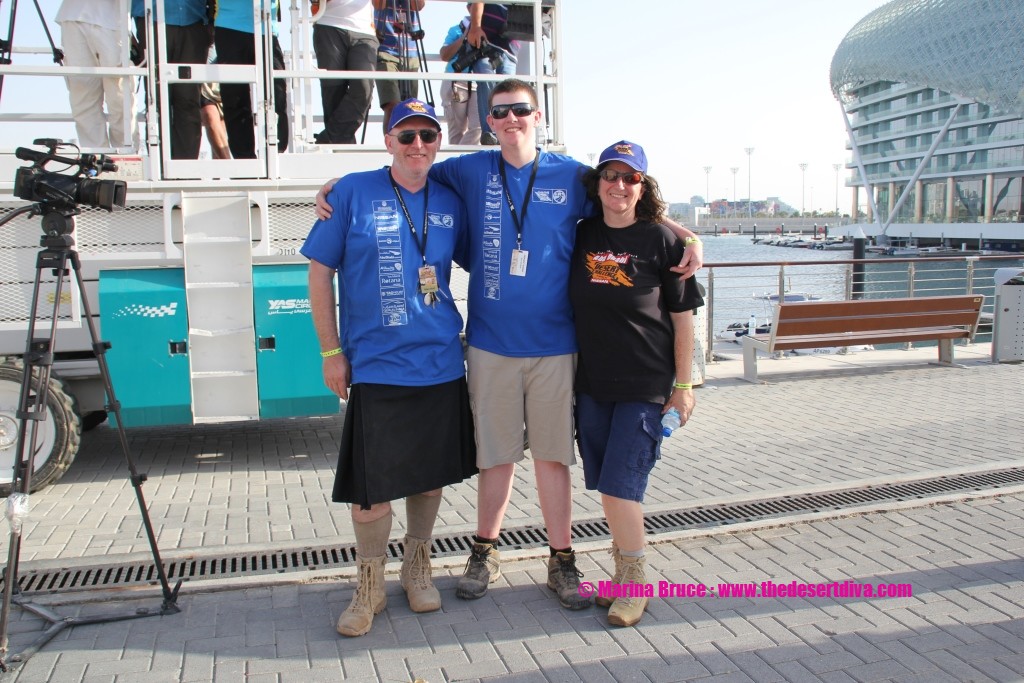 We arrived on the Saturday and enjoyed the Super Special Stage – a race around a rough course hewn out of empty land on Yas Island.  It’s not just about the speed you can get round the track, tactics come in to play as the moto winner will be the first to hit the sand on Special Stage One, an “honour”  nobody really wants! 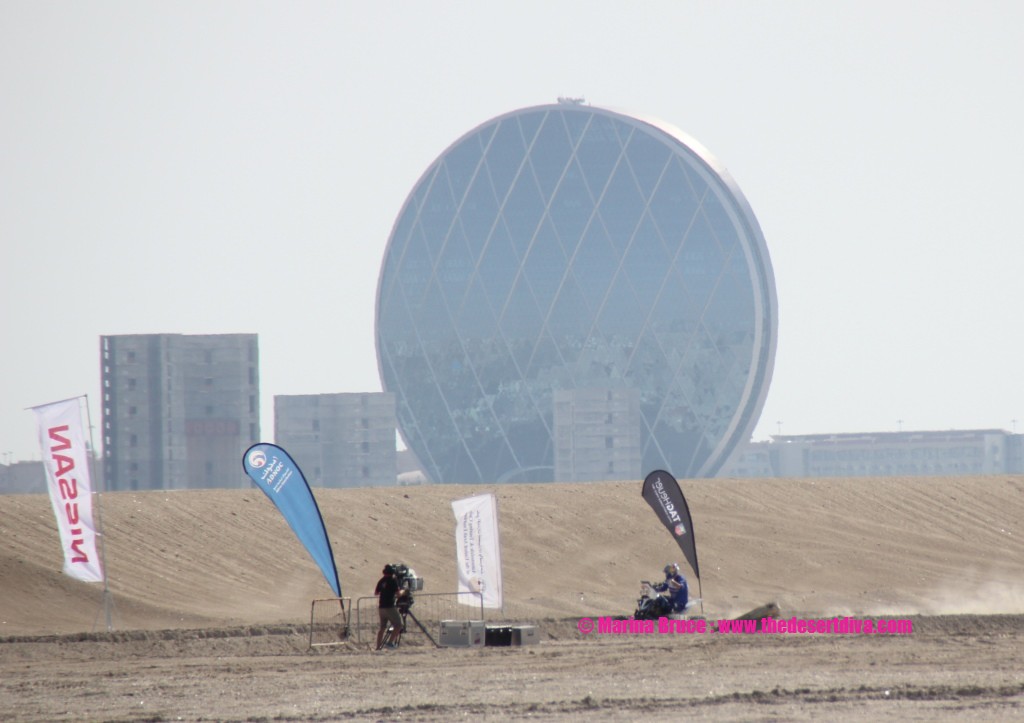 Sunday morning saw  us (Mark, Renaud and myself) collect our  cameramen from Yas Island – and for a second year I had the pleasure of the lovely Jerome’s company for the week – before heading into the desert to capture some action.  This year a total of 108 competitors started the event, which takes place over a total of 6 days; the first day is for the Super Special Stage , followed by 5 days in the deserts of Abu Dhabi Emirate, focusing on Liwa. 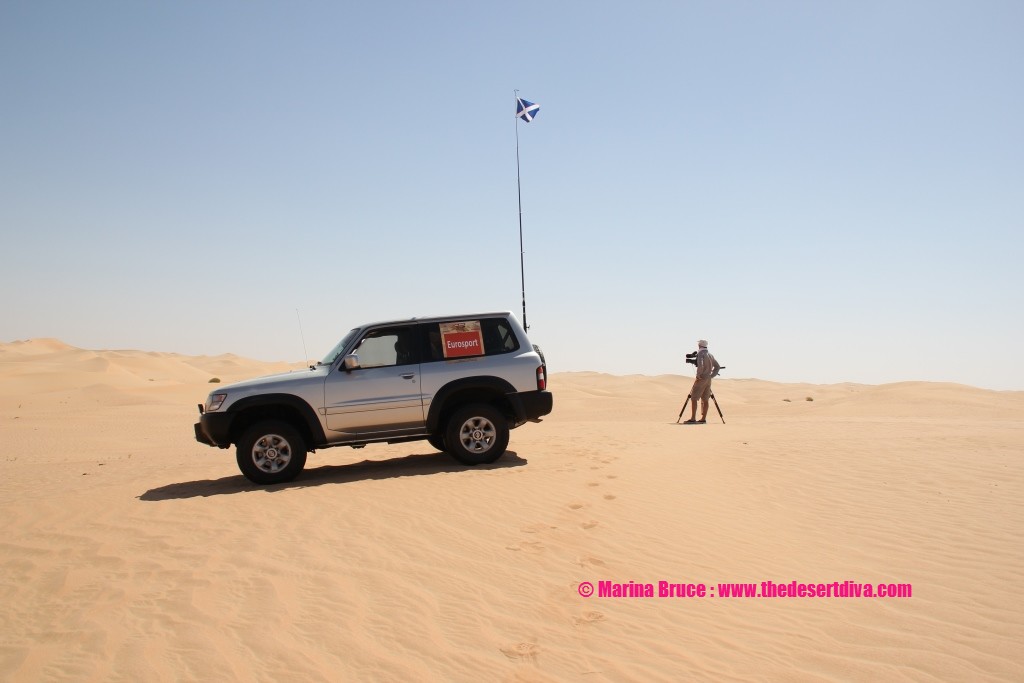 Special Stage One saw the competitors drive a road section (also known as a liason section) to the start point at Razeen, before being let loose on the sand for around 300kms, before arriving at the bivouac (base for rally control and competitors) before sunset.

It was a sad day however – Dubai based biker Cameron Waugh had an accident which, despite the valiant efforts of other competitors and the medic team,  proved fatal.  The competitor briefing that night was a sombre occasion with a minute’s silence held followed by tributes from ATC UAE President Dr Mohammed Ben Sulayem and Sporting Director Ronan Morgan with a call for everyone to honour Cameron by doing their best in the challenge.

The ADDC welcomes attracts entries from motorbikes, quads, cars and trucks which are graded according to power/weight/modifications etc.  Here is a breakdown of the car rally classes.  Bikes are timed out of the gate first, followed by quads, cars and finally trucks – this year there were no truck entries.

Day three (Special Stage 2) provided one of the most enjoyable morning drives for two of the Eurosport Team.  Our remit was to enter the desert at PC2 (refuel) and from there drive the rally track until we found a good spot to film.  The only drawback was the PC2 was located on the Arada-Ghayathi road, some 160kms from the bivouac, necessitating a very early start.

When on the road we encountered fog after Madinat Zayed and visibility was only around 300 metres when we deflated,  but the mist cleared in a matter of minutes to let the first kiss of sunlight illuminate the dunes. We drove for quite a distance before finding a good spot to film some rally action but time was on our side and I certainly enjoyed following Mark over some  beautiful terrain – we were even lucky enough to see a couple of small groups of gazelle.

Competitors in the rally navigate through the desert using waypoints and have to drive within 200 metres of each one or they will get time penalties for missing them.  Between these, the drivers can be anywhere so long as they are less than 3 kilometres either side of a straight line between the two points – which is why the Eurosport Team need to station themselves at a good vantage point where it is certain the field will come through. 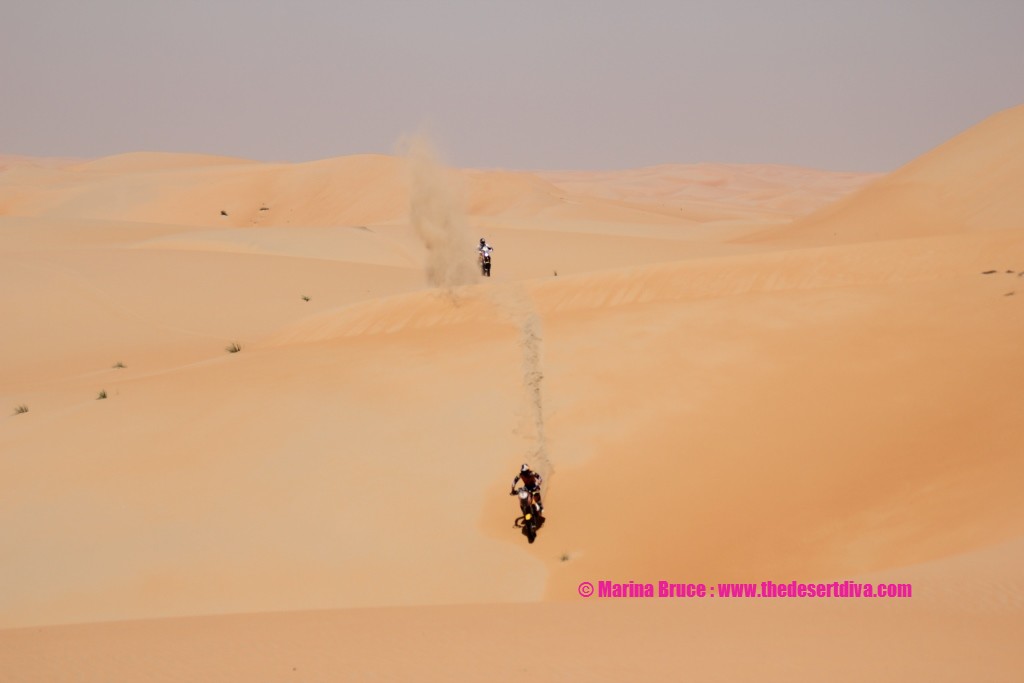 Highlights from day three (SS2) can be viewed here.

Each night we camped in our own tents at the bivouac; a small village to house the rally teams, media centre, restaurant, temporary gas station and of course the marshals.  The photo below is by Jean-Francois Lefebre  and our small “Oasis Offroad encampment was just out of shot on the right hand side.  Mark found us a grand spot away from the generators and vehicle workshops but not too far a hike to the showers! 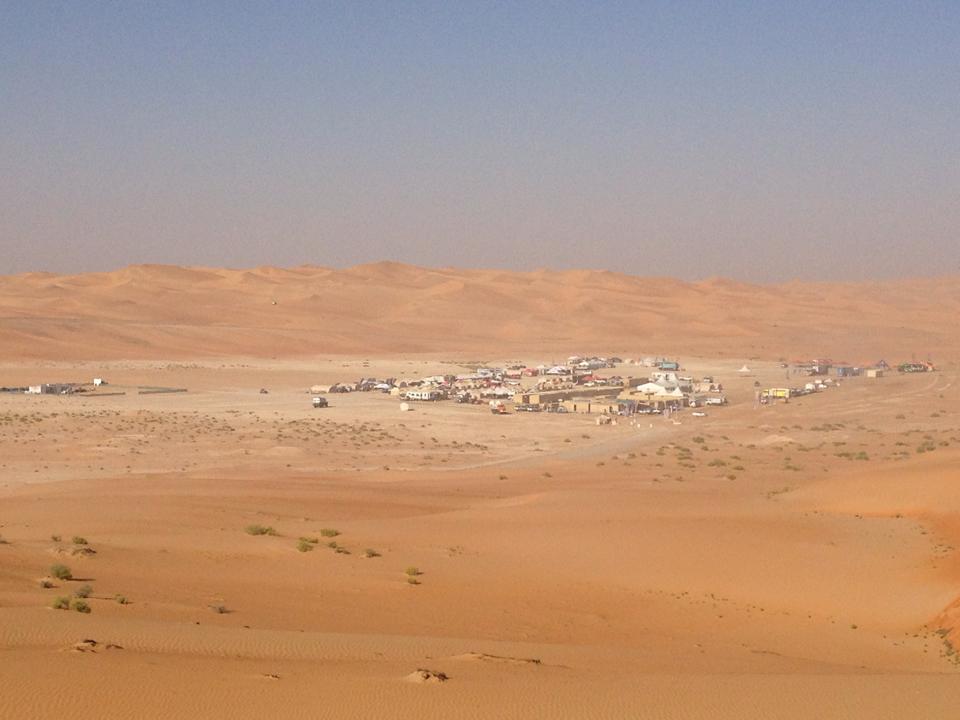 Part two of this blog will be done just as soon as I have returned from Liwa!