Following on from the great success of my last route scouting trip in Liwa just three weeks ago (which you will be able to read about in the October issue of OutdoorUAE magazine), I was keen to do even more.  I dashed off an email to some adventurous desert drivers and before we knew it the 19th was here and it was time to take up residence at the lovely Liwa Hotel for the weekend.

On Friday morning we were ready to go at the ungodly hour of 6.15am, having picked up our packed breakfast from the hotel – however the area was blanketed in unbelievably thick fog with visibility about 20 metres, so we stopped at the ADNOC for an extended coffee break until it cleared enough for us to drive to our deflation point in safety. 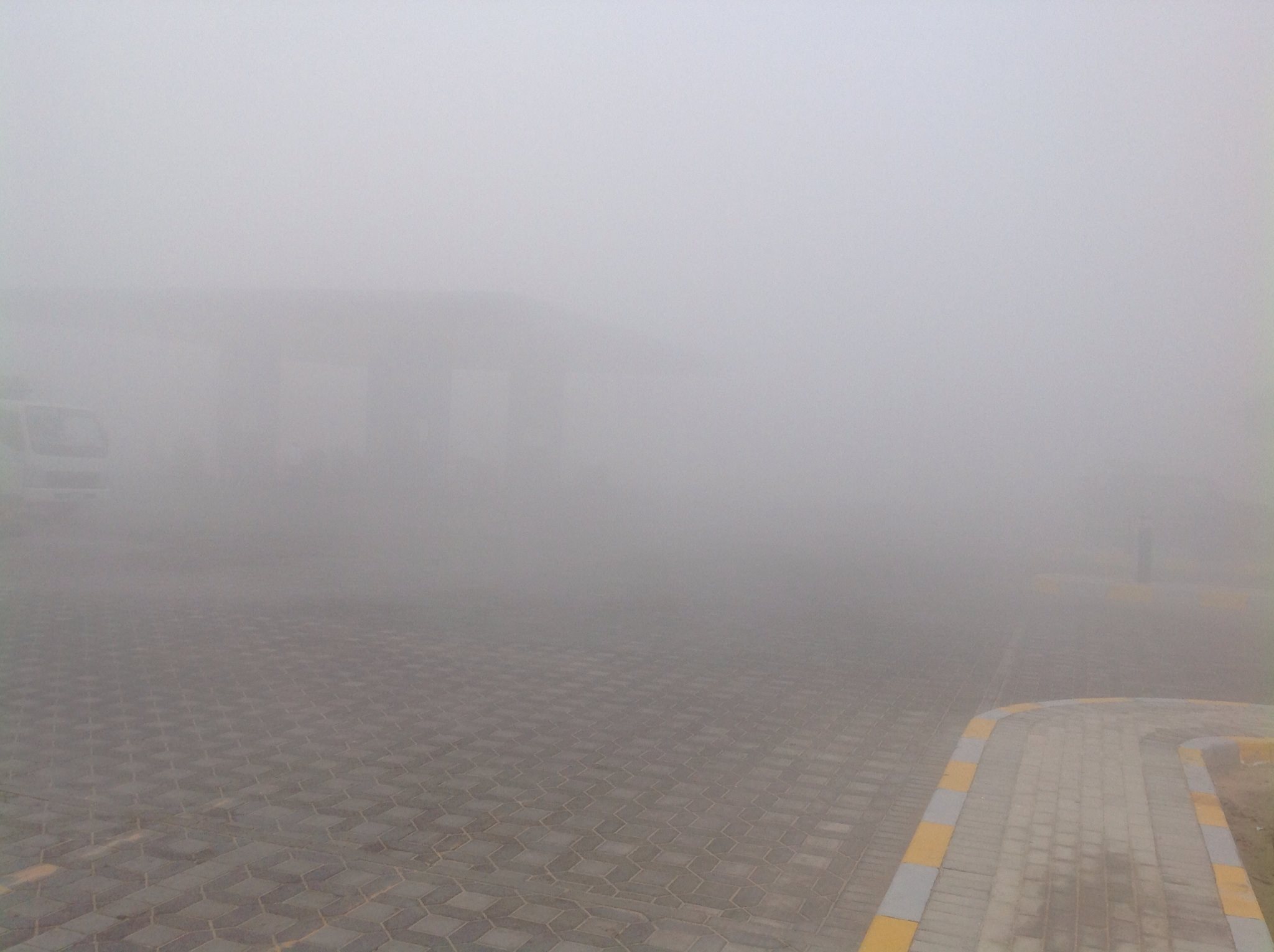 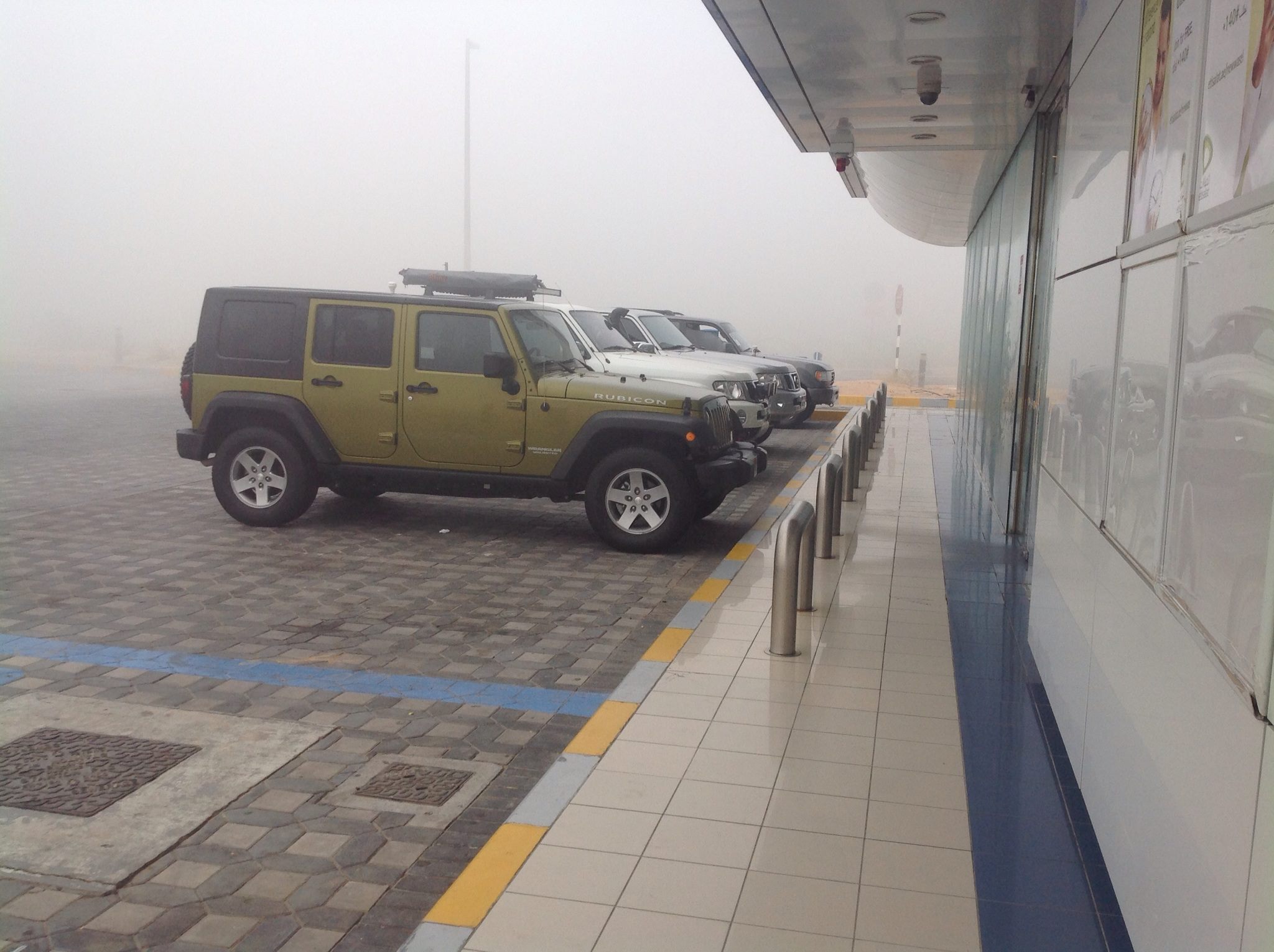 You should never drive offroad in fog; you could literally fall off the side of a dune as you have no idea where you are going, so we were about 90 minutes later than planned in starting, hitting the sand at about 8.45am! 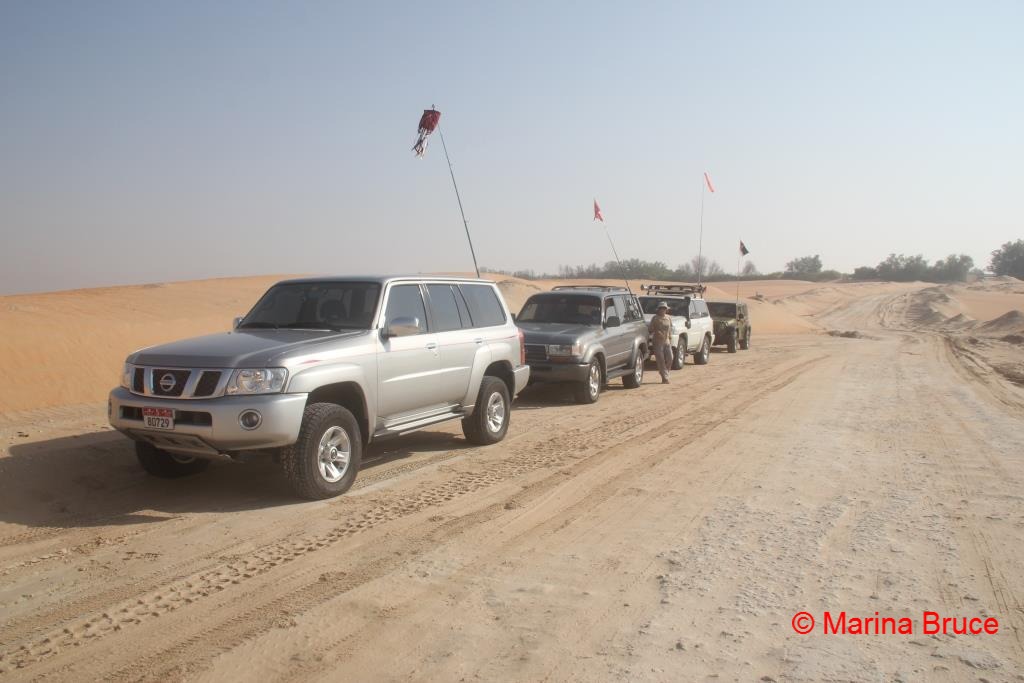 Karen did a fine job of leading over the extremely easy sand between the fodder farm and the water cisterns (aka the green windowed palaces) and we stopped to show Tom, Bob and Cyndi our 21st century wishing well aka the aquifer cap.  A few kilometres on we turned left and headed south to line up with the our next waypoint – the abandoned Oshkosh. 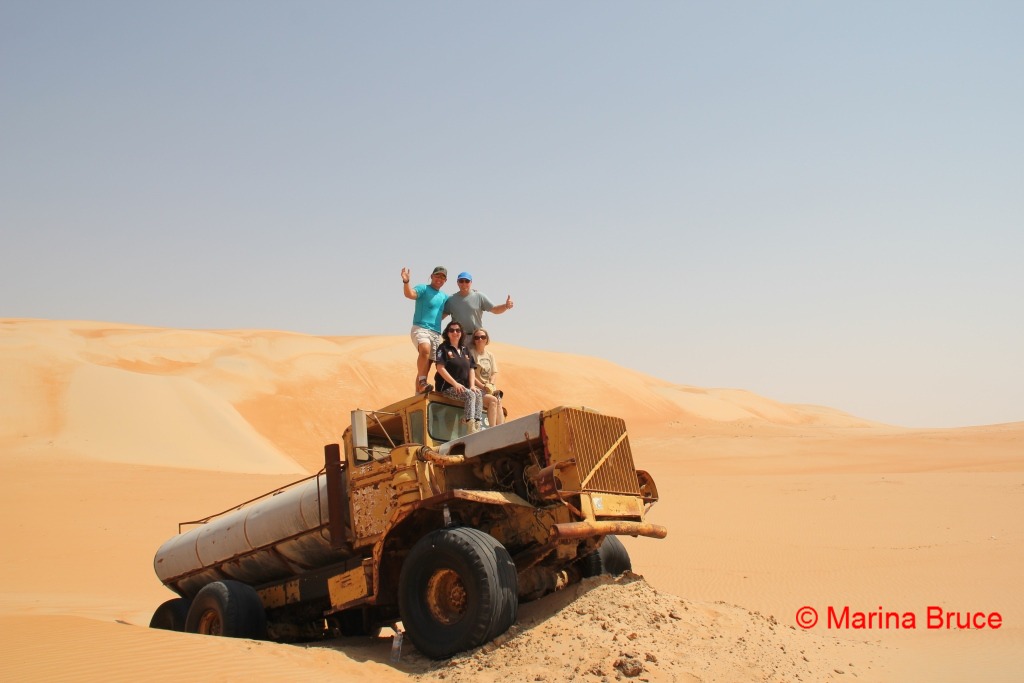 Once we had eaten our breakfast and had the obligatory photoshoot – standing beside the tanker for a photo is SO last year, you need to get everyone, or in this case the drivers, to climb on top of it – we continued south on a “rollercoaster” route, at a cracking pace.  No major problems were encountered as Karen led us up very large dunes and down some great slipfaces – offroading doesn’t get any better than this! 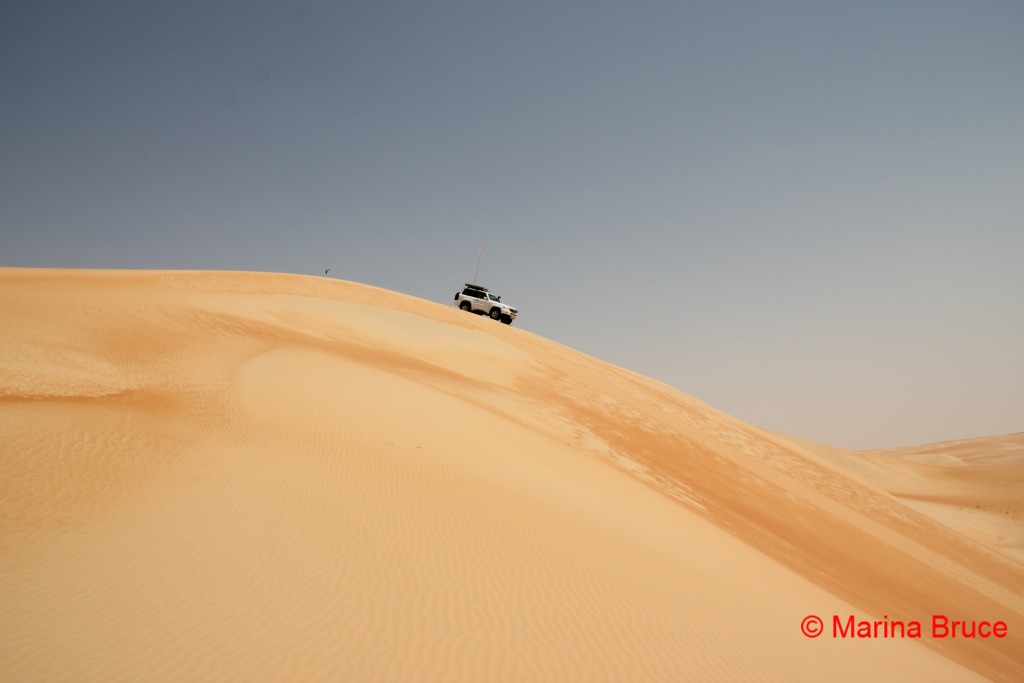 I’d warned my driving crew that the last 5-10kms of the route were a bit technical and we knew we had arrived there when we hit this bowl – the first of many “bowls from hell”.  Soft sand, a steep rise, not much room for manoeuvering! 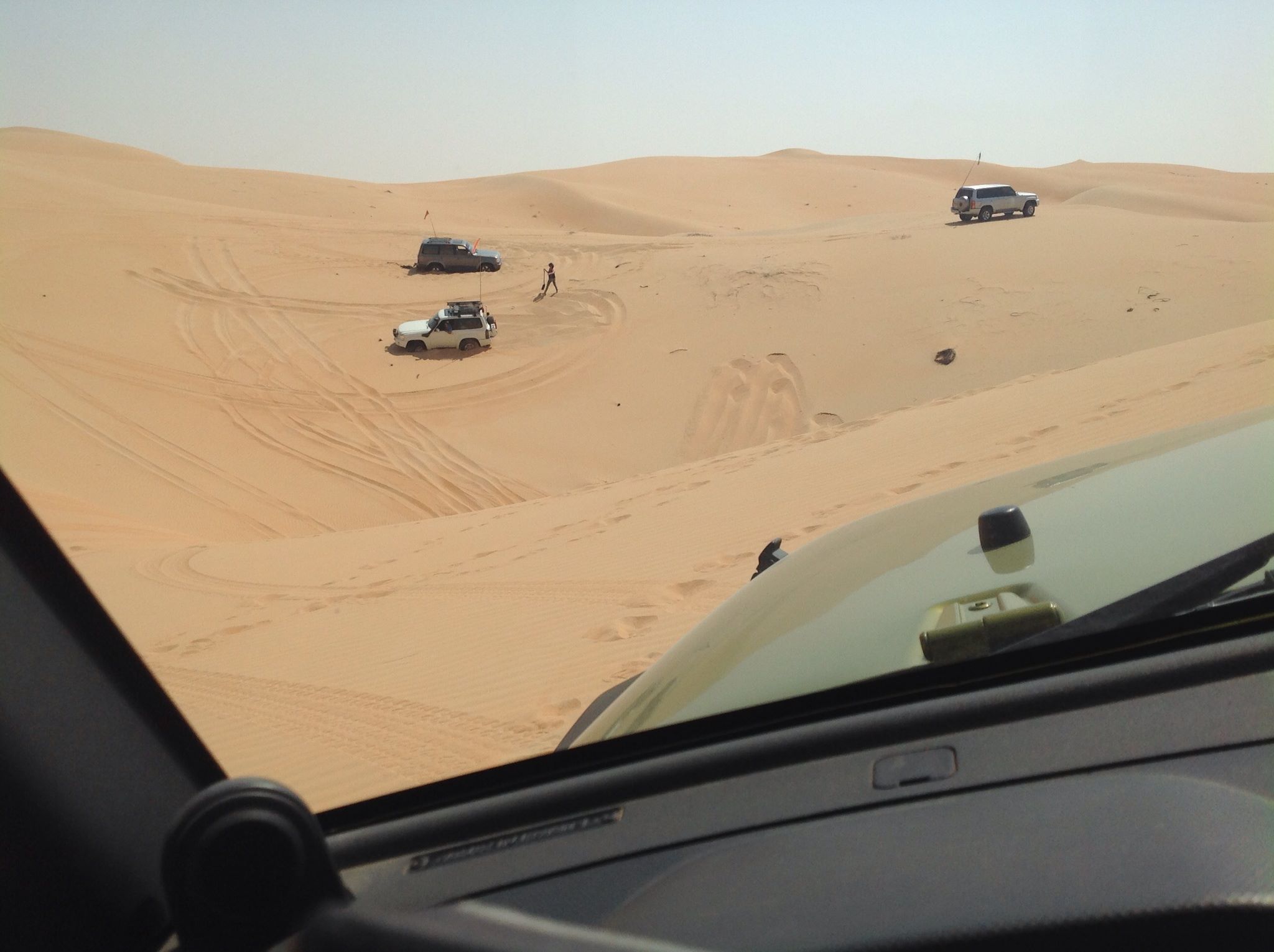 Tom had to haul Karen off the top of a dune and when doing so, her recovery point came loose, meaning that forward recoveries of our heaviest and longest car were no longer possible.  Maybe this is the point we should have left the desert, but with no obvious easy exit plus no stucks up to this point we took a chance and moved on.

Before we knew it we were less than 10kms from our finish point – the fish farm at Khannour; we expected to come across smaller, more technical dunes here and we were not disappointed.  Or maybe we were – you can make far faster progress over large rolling dunes than small choppy ones and the driving feels nicer too!

Below is the last photo we took – from here on we were all too busy dealing with STUFF! 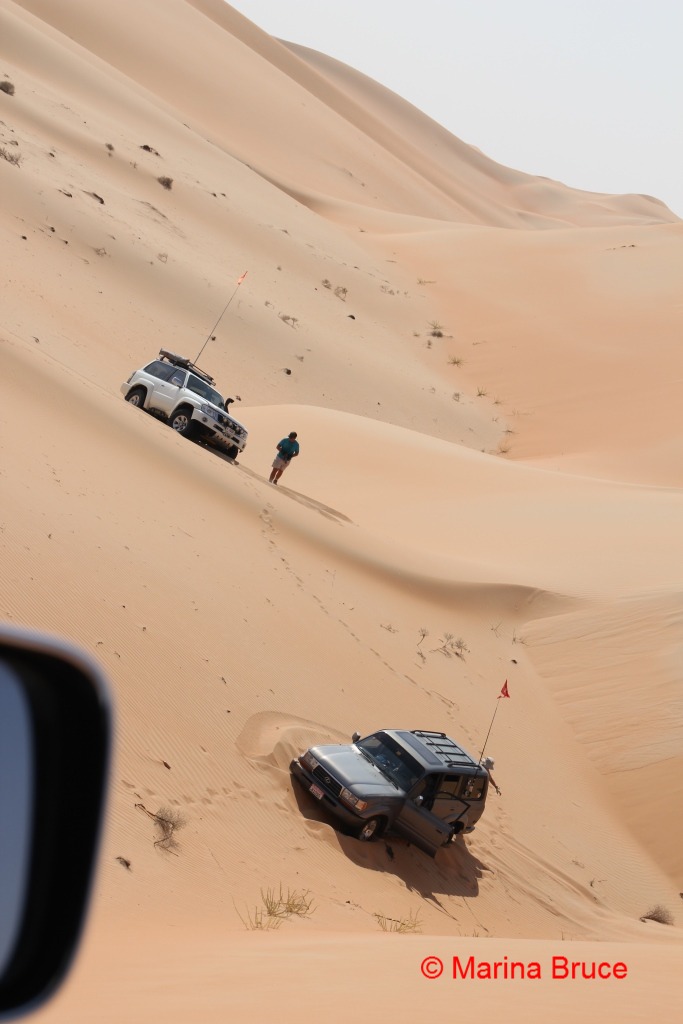 We endured stuck after stuck, many double as the second lead got stuck himself while extricating our leader!  I have driven Neil’s LWB Patrol over the dunes on a number of occasions over the summer and had thought it almost impossible to get stuck in it – well my comeuppance came on this trip!  I discovered that my favourite self recovery trick of rocking back and forward creating a firm path to drive out of isn’t so easy to achieve with a tiptronic auto gearbox as opposed to my own SWB Patrol manual one!  When you get stuck in a bowl you often need multiple attempts to drive out and these take time – the clock was ticking and our plan of an afternoon in the pool was evaporating as quickly as the early morning fog!

The dunes in behind Khannour are not particularly pleasurable to drive on; when driving in the Liwa “crescent” you have long sabkhas and then tricky technical crossings to the next one, where you can relax a little as you speed over the sabkha – here the technical dunes were relentless and if you lost concentration momentarily you could count on getting stuck!

Having engaged 4LOW much more than normal and also keeping the engine revs high through super soft sand we all used much more gas than expected and everyone except me was running low on fuel (the LWB patrol has a 95litre tank plus a 33litre sub-tank).  If your fuel empty light comes on when you are on the road, you normally have 30-50kms left in the tank, but offroad this is not necessarily the case.  When you are running nearly on empty, if you go up a steep hill your petrol will move to one end of the tank out of reach of the fuel feed pipe meaning your engine can be starved of petrol and cut out.  Not what you want to happen if you are in a bowl, therefore travelling through big dunes  and bowls was no longer an option for us.

Eventually we saw a town and a plantation about 5-7kms distant and started to dream of a cooling shower and a long swim at the hotel, but trying to reach the road was proving difficult.  We had 1.7kms to go to the final exit point which was the fish farm and all that stood in our way was a series of huge bowls! 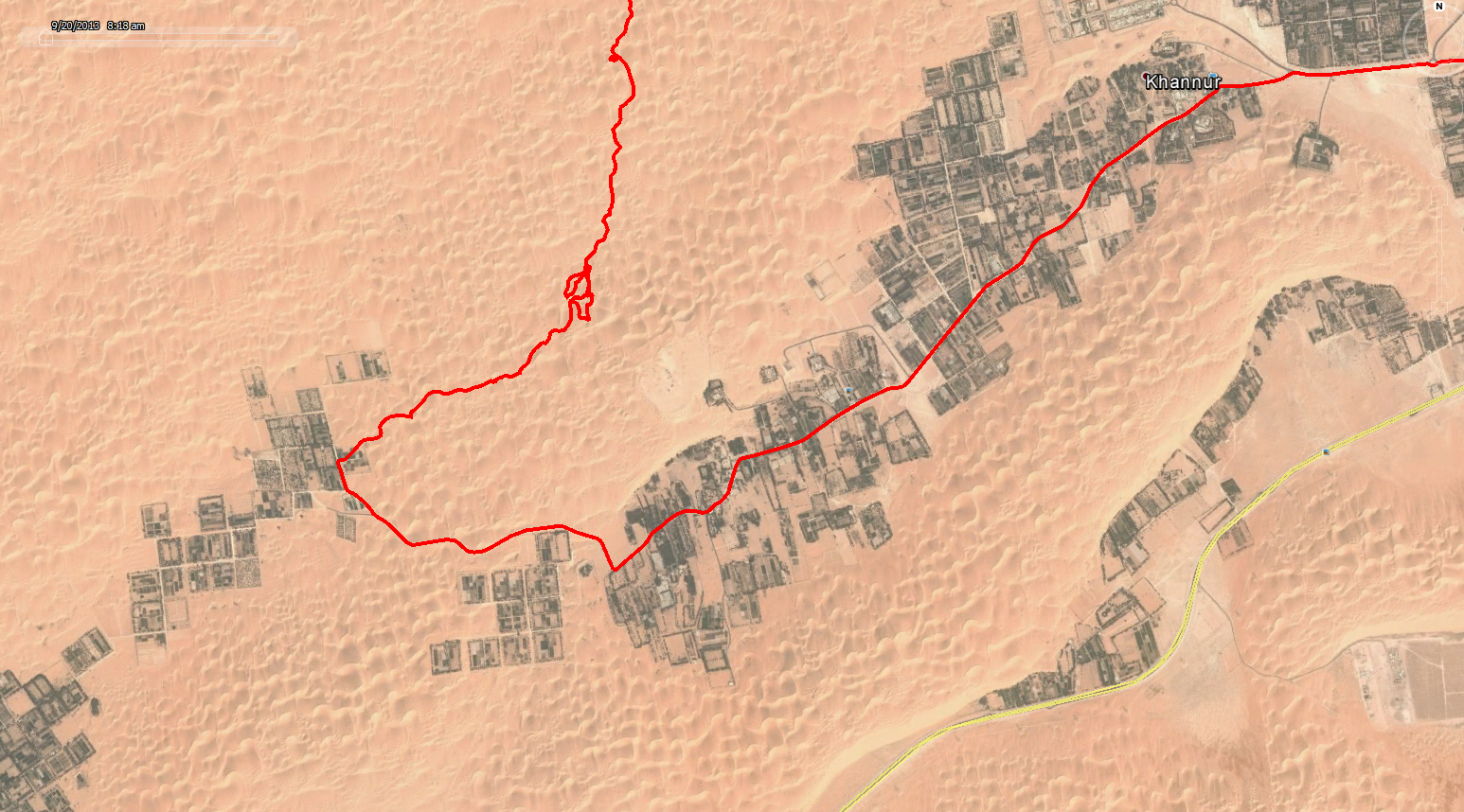 Tom did some scouting to see if he could find a sand bridge to get us through, and in doing so he got stuck and had a popout (when the tyre comes off the rim).  This was to be our longest holdup – normally you can fix a popout in about 10-15 minutes, but he discovered that his brand new hi-lift jack wasn’t working – the release catch wouldn’t allow the mechanism to drop.  We tried the standard jack but his car is lifted so it wouldn’t reach – in the end he dismantled the hilift, threaded the lifting mechanism on again from the bottom and soon had the tyre problem sorted but in the meantime the sun had set.

While he was working on this with Bob, Karen and I had donned our backpacks complete with water, satphone and torches and headed up the dune ridge with the intention of hiking over to the fish farm as I was sure there would be an easy way out of the dunes and you could rely on a local farmer to know it.  We had only gone 200metres or so when we spotted a plantation about 1km away – and a relatively easy line over low dunes to reach it!

Karen scouted a track out to the plantation while Tom and Bob tidied up after sorting the popout and it didn’t take her too long to reach the farms, where the first vehicle she encountered was a toyota pick up driven by a local farmer. “My friends are still in the desert” said she.  “No go desert, DANGEROUS” said he.  “My three habibi still there” Karen replied.  “Khalas” said the farmer and drove off!  He clearly had not understood what she was trying to say as its the unwritten code of the desert to always assist if asked.  Thankfully the next person to drive past was a young man called Saeed in a beautiful Escalade 4 door pick up, and he took Karen “just along the road” to the gas station.  Turns out the road took about 20 minutes to drive each way, and on the journey he understood what she was saying on the phone to me, realised we had two cars in need of gas, and stopped at a small mosque shop to buy her an extra container!  As she unloaded these at the gas station she noticed there was a fine looking goat in the back of the truck “Don’t let him know but I’ve bought him for Eid!”

Once she had fuelled up her car, she made her way back in to show us the easy way out and it was such a relief to see her car lights – our walkie talkies had long given up the ghost and there was no mobile phone coverage at the plantation area so she couldn’t offer us any guidance from the gatch track!  The sun had set a full hour before we tackled the last kilometre, this was the first time Bob had ever employed his Jeep on “night ops” so it must have been doubly challenging for him!

All day long we had been sweating like mad in the 42C heat and when we reached the plantation, certainly speaking for myself a few tears of relief escaped (or maybe it was just all the sand in my eyes!).  And the blood?  Well, none was shed in the desert but our day was not yet over.

At the gas station when we were airing up, Tom used his own compressor and when he was disconnecting the airline it recoiled, hitting him above his eye. “Do you need ice for that” “No, I need stitches!”  Thankfully a plaster was sufficient as an interim measure until he could get back home on Saturday morning.  You can’t believe how much blood flows from such a cut but I am just so thankful it didn’t hit him squarely on the eye.

We did a few things wrong, but most things we did right.

Things I’ll do differently in future