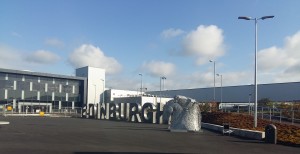 I made my annual pilgrimage to Scotland last week – and what a dreadful journey I had.  It got me thinking that perhaps I should research the main options for this route to help some of my family who are scheduled to visit me later in the year make the best possible choice.  Here are some of the main options available (note flight frequency, luggage allowance and seat pitch are correct at time of publishing. All of these can change so please check with your airline before booking.)

Etihad operate a direct daily flight to Edinburgh from Abu Dhabi Airport.  The flight from AD is during the night with the return leg from Edinburgh to AD leaving early in the morning and arriving mid-evening in the UAE.  The prices are often more expensive than their competitors, but as it is direct there is less chance for things to go wrong.  One pet peeve is that they frequently turn off the entertainment system 30- 40 minutes before landing!  Food is ok.  Their luggage allowance for economy is 30kg in multiple bags. Seat pitch 31-33.5″ width 17.5″ (may vary depending on aircraft)

KLM offer daily flights to Edinburgh from both Dubai and Abu Dhabi.  These connect at Amsterdam’s Schipol, which is a pleasant airport to spend an hour or two in.  KLM are based in Europe, which means that passengers can claim compensation for delayed/missed connection flights which are deemed to be their fault (see this Moneysavingexpert link for rules).  Their luggage allowance for economy is 23KG in one bag. Seat maps not available from flight guru for this route.

Sister airline of KLM, they too operate daily flights to Edinburgh from Abu Dhabi.  They connect through Paris CDG which every regular traveler hates – it is massive, connections take time and it is one of the most infamous airports for losing luggage.  Like KLM, they have to pay compensation claimed under European law for delayed/missed flights.  They codeshare with Etihad so some of their flights on Paris to AUH will be operated by Etihad.  Luggage allowance for economy is 23KG in one bag. Seat Pitch (boeing 777) 31″ width 17.5″.

BA offer daily flights to Dubai and Abu Dhabi from London Heathrow. Some of the Abu Dhabi flights ultimately land in Muscat, so they tend to be busy.  Heathrow has five terminals; BA operate principally out of T5 and providing your flight lands there, as their scheduled Edinburgh ones do, then transit is easy and quick.  If you land at another terminal it can take up to 100 minutes to transit and this is what makes Heathrow my second unfavourite airport.  That being said, the BA staff are friendly and efficient, and with BA being a European carrier, there is the opportunity to claim compensation in case of delays and missed connection. The luggage allowance in economy is one piece at 23KG. Seat pitch (Boeing 767) 31″ width 17″.

Operate a daily flight from Doha to Edinburgh.  There are many connecting flights from Abu Dhabi and Dubai, but make sure you select one with a generous connection time (I would suggest a minimum of 1.5 hours – see below!!!).  Low quality food.  Baggage allowance is 30KG in multiple bags.  Seat pitch (A330) 32″ width 17″ (A380) 32″ width 18″.

The airline was Qatar Airways.

According to Flight Stats, the initial flight took off late – at 12:45am which then arrived at Doha at 01:10, however I checked my watch on landing and we touched down at 00:54, although due to construction works at the airport it took us an age to reach the gate.  On arrival through the gate at 01:21, I was told that my connecting flight had left, which, since there is only one flight per day to Edinburgh seemed unbelievable.

I asked if I could fly the next day, but unfortunately that was not possible.  Apparently in Doha, there is a maximum transit time of 24 hours, and the next day’s flight left much later, at 06:40 in the morning, meaning a transit time of around 29 hours.  So the only way I was going to get out of that airport was on a flight destined to somewhere other than Edinburgh.

Now the test of any business is how they react to make their customers happy or happier when things go wrong – Qatar utterly failed!

The transit desk offered me a flight to Paris then onward to Edinburgh, scheduled to arrive at 4pm in the afternoon, and told me this was the only option I had.  I politely asked if I could be put up in a hotel for a few hours and they said that was not possible. I asked if I could get an upgrade on the onward flight as I would have been awake for more than 24 hours when it left.  Sorry, no.  I tried playing my favourite trump card “I am a travel blogger and writer with over 90,000 hits to my website each year” to no avail.  The hostess did make a phonecall to see if she could get me into a lounge but they were full.

Then I was offered a flight to LHR and onwards to EDI, so accepted that option once I was sure that the transit time allowed was adequate to transit between T4 and T5.  It left slightly earlier than the Paris one – at 05:50 and the connecting flight would have me reach Edinburgh at 14:15.

I was offered a chance to rest in the “quiet” area, which has recumbent seats, but unfortunately it was situated next to two busy gates so it was not particularly quiet.  Then a security guard lingered outside on the concourse for a long time, his walkie talkie beeping every 10 seconds or so but he moved on apologetically when requested.  The air conditioning seemed to be set very low and blankets were not available – some other passengers got up and left their flight blankets so I nabbed those!

It was a long night but eventually the time came to board the A380 to London.  I was quite excited at the thought of flying through the sky on this massive jet, however I have to say that inside it was nothing special, just a new, very big plane.  Breakfast was served and it was bad, the eggs lacked taste with a distinctly rubbery texture –  the last time I flew with Qatar in April 2015 the food was great, so I wonder what has happened?

My husband Neil was also flying to Edinburgh with Etihad on “points” and I had been due to touch down in Edinburgh 30 minutes before him; we had joked with each other that it was a race!  I logged onto the internet while in the air (15 minutes free with Qatar, though you can get 30 if you have two devices and two email addresses) and received a message from him “waiting at the car rental area”….I was still flying over Poland!

We arrived in London and I got onto the Edinburgh flight on time, but once the plane was loaded there was a further problem – air traffic control had shut some airspace in Scotland and we would not be able to take off until 50 minutes after our scheduled time.  I was feeling a bit unwell by this time – I had awoken in MZ 31 hours previously and I had not eaten for 8 hours, so the cabin crew gave me some snacks and a cup of tea and that set me up well for my arrival in Edinburgh.  The brightest stars in this whole journey were the two lovely ladies of BA!

I finally touched down in Edinburgh, just after 3pm, almost 18 hours after leaving Dubai, and guess what – there was no sign of my luggage!  I wasn’t surprised. (It arrived 30 hours later.)  I met another 10 people who had missed the connection in Doha and they were as equally disgruntled.  Turns out that one lady’s husband was already on the DOH-EDI plane, and he had begged the crew to wait just a few minutes to let us board, but his pleas fell on deaf ears and he told us some members of the crew were quite rude to him.  One had even told him that their situation was his wife’s own fault because she booked a short connection.

Our plane was on the ground and taxiing towards the terminal when our outbound flight shut their doors!

So I have some questions for Qatar airways.

Given that Doha airport has construction which is delaying arrivals at the gate, why were we given the option to purchase a flight with such a short connection?

Why did you not hold the plane back for us – Doha is a relatively easy airport to navigate through and we could have been on the plane 15-20 minutes after landing?  The eleven people affected had an exhausting extra nine hours added to their journey which could have been avoided if they would have just waited!

Why were we not all offered a hotel, a lounge or somewhere quiet and comfortable to rest?

Why are you so highly rated?

So, I am booked to return to the UAE via Qatar and as it is a daytime flight I intend to be on it, however I will never ever fly with them again.

I forward screenshots of this blog to Qatar Airways on Tuesday June 14th, requesting their comments before I published it on Saturday June 18th at 10am.  I instantly received an auto-response confirmation with a case number but there has been no further contact.  I didn’t expect anything else!