Back in my home country of Scotland, the Scout Association challenges their members to “Zodiac Camp”, that is to say, camp at least one night in every month of the year.   At 57 degrees north it’s quite a challenge, with freezing cold nights, rain and biting wind, not to mention biting midges (Scottish mosquitos); this initiative inspired me not to camp, but to drive every month of the year in the Liwa area.

I tend to spend quite a bit of time in Liwa – there are so many beautiful areas to explore it would be a shame not to!  Undoubtedly the best time to drive there is between November and February, but that’s not to say that you can’t venture there all year round with good preparations and a bit of risk management.

Please note: No matter what the time of year you should never drive into the desert on your own – in my month by month highlights I refer to “us” and “our” whether a private trip, an Oasis Offroad club trip or just a foray in the sand with my husband. 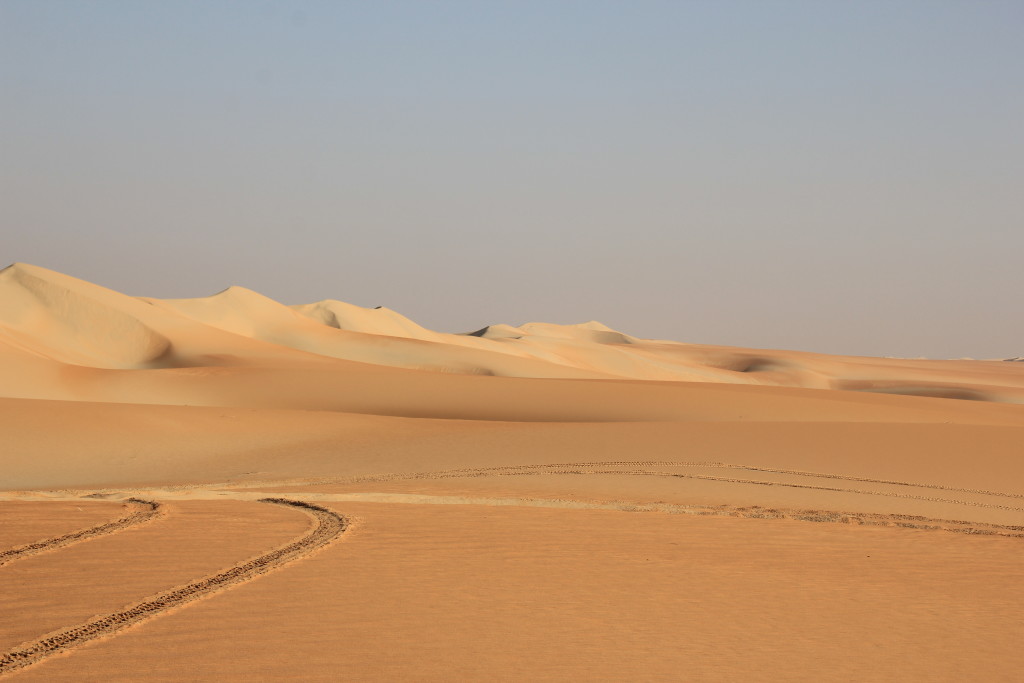 This is a great month to explore the sands, if you are lucky you’ll find wet sand to make the going easier (or to allow you to climb higher with ease), and the weather is cool all day long.  It’s a great time to tackle longer trips – earlier this year Oasis Offroad visited the most south westerly point in the UAE, driving over 170kms in the process.  It was a long haul but the peace and quiet, and the most amazing starlit sky made the journey well worth the effort. 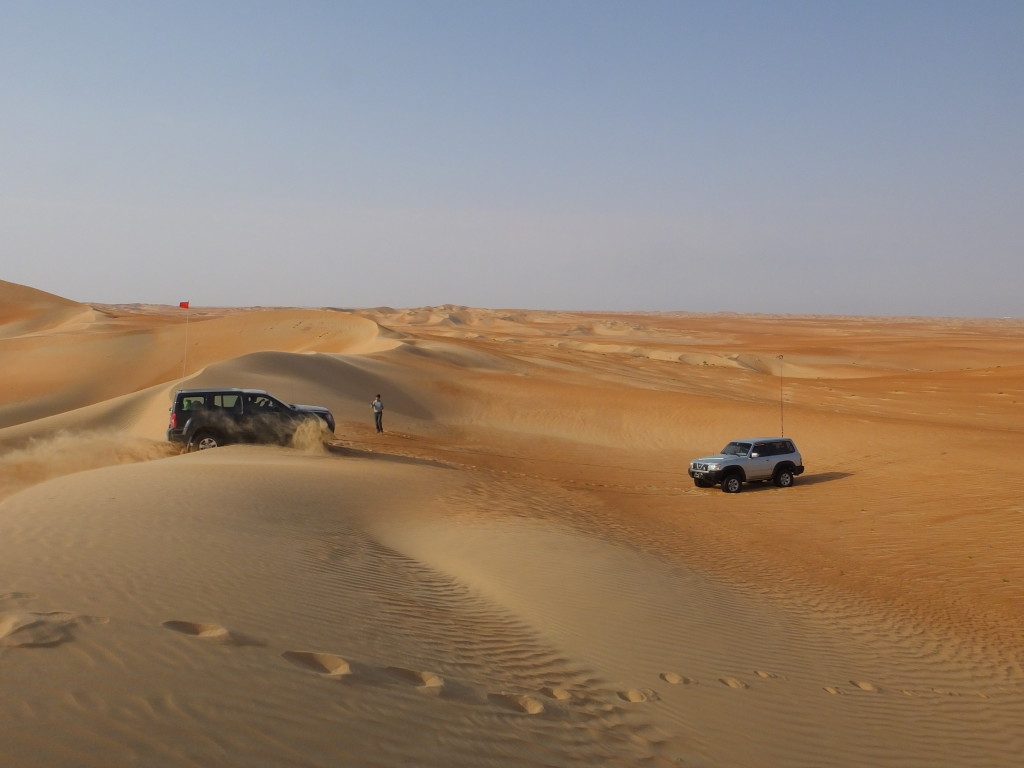 One of the best months for exploring Liwa, once any fog lifts (normally around 9am) the area experiences many sunny days with real warmth from the sun.  One memorable drive this year saw us explore the area north of Himeem with a small group, exploring uncharted territory, for us at least.  The cool days at this time of year make February an excellent month to go exploring!

This is also peak season for camels to have their calves, so keep your long camera lens handy!  Whatever you do, do not approach a very young camel as its Mum could be very aggressive when protecting her young! (above photo by Debra Galvin) 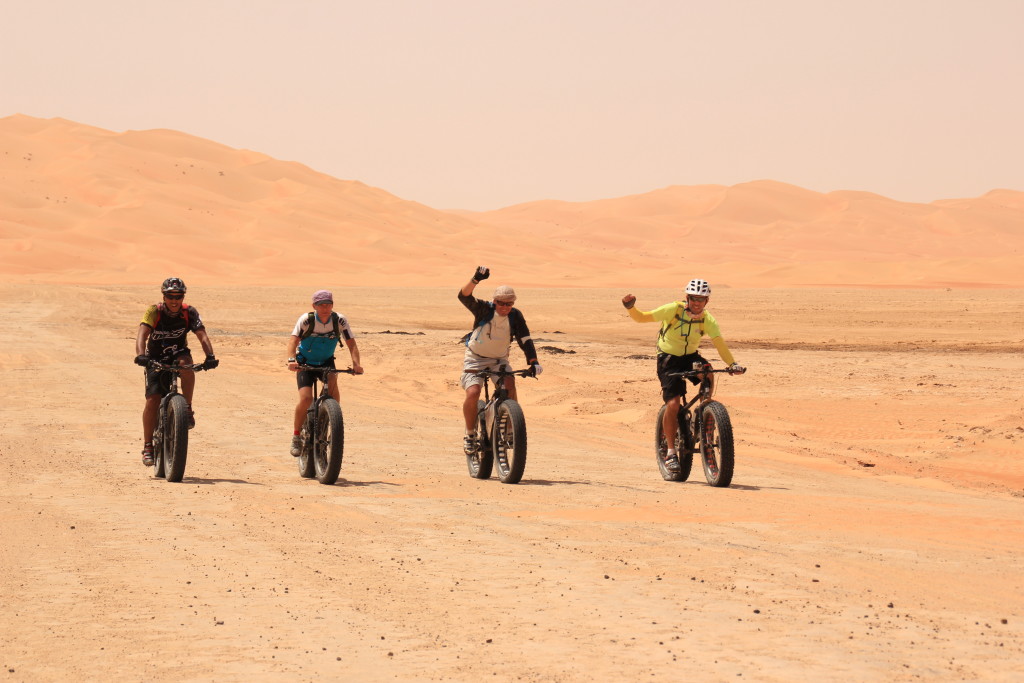 We’ve had quite a few forays into the Liwa area during the month of March.  It’s still cool enough at night to sleep in a tent and our group often has a last gasp long distance exploration trip in the spring.  My own most notable trip was when I led the support team as a team of four “fat” cyclists crossed the Liwa Crescent – you can read about their adventure either here or in OutdoorUAE in April 2013. 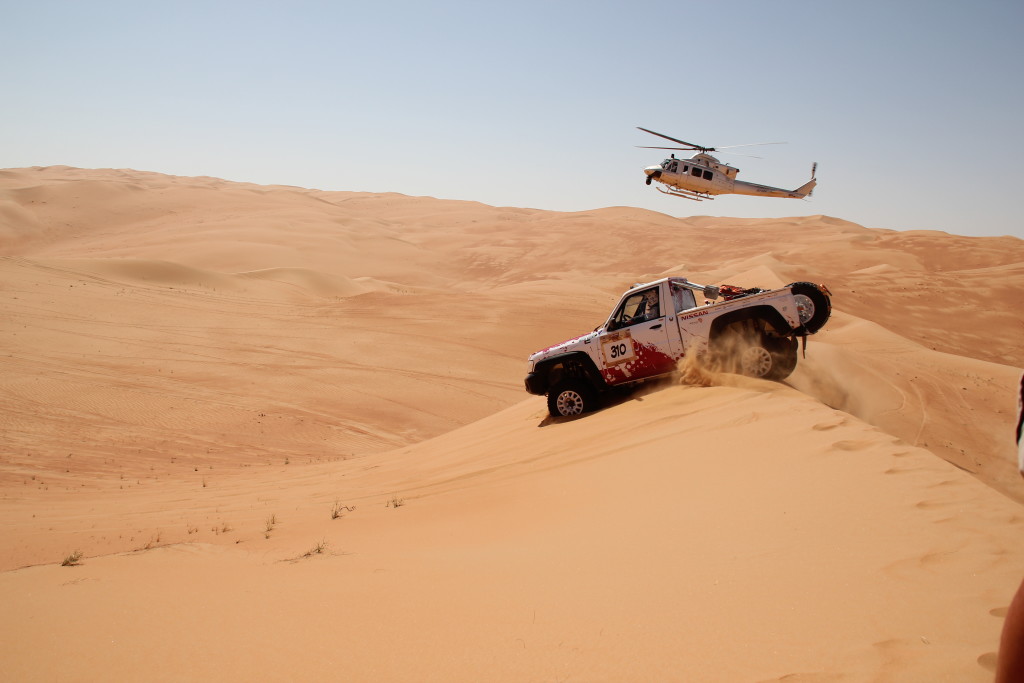 The Abu Dhabi Desert Challenge takes place in the Liwa area each April and it’s great to see the rally cars and bikes power their way seemingly effortlessly over some of the most challenging terrain in the world.  They are always on the lookout for volunteer marshals so if you have a spare few days in April then get in touch with them – no offroad driving experience necessary as most of the checkpoints are near the road. 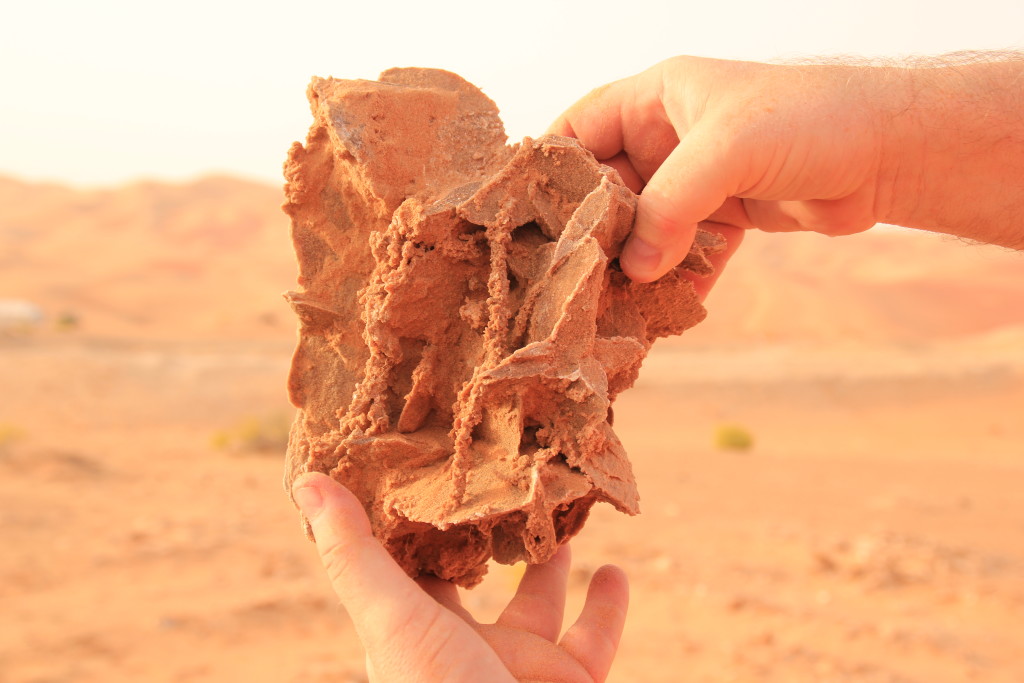 As the mercury rises, casual offroad drivers are starting to avoid the most remote of areas and only hard-core offroaders remain.  The days are long, typically with about 12-13 hours’ daylight but they are hot too and I find 6-7 hours in the sand enough.  In 2013 Oasis Offroad ran a weekend trip with a difference – day one saw us congregate in the Liwa’s hotel carpark at 4.45am before driving to a good spot not far off the main road where we searched for desert roses as we watched the sunrise.  We then headed back to the hotel for breakfast and to sleep, before heading out in the afternoon for an offroad drive to the abandoned Oshkosh digger.  You can give your desert weekend family appeal by visiting some forts or attractions as well as some serious sand dunes! 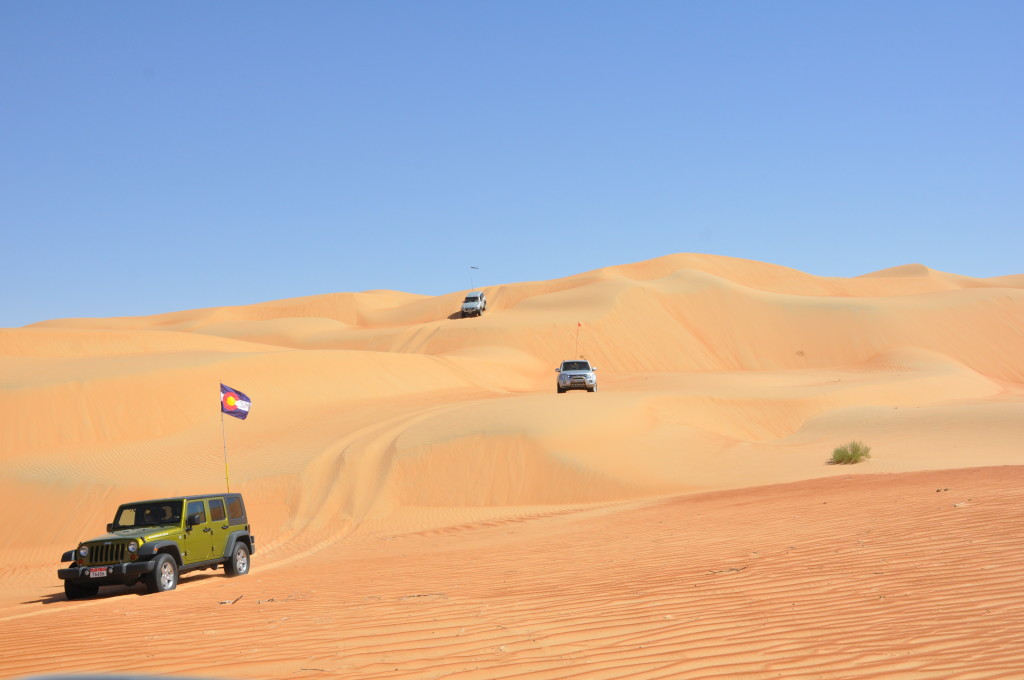 Like May, driving in Liwa in June is best left to the hard-core offroaders, ideally with at least one winch in the group to make recoveries as easy as possible.  We had a very special drive through the Crescent last year; a friend who is a very keen photographer, Amro Abu Kuhail, had expressed a desire to see Liwa offroad and we were only too happy to oblige.  8 cars drove over 100kms offroad on day one, followed by the same the next day where we drove a challenging route with 4 experienced drivers through the Liwa Crescent area. (above picture by Amro Abu Khail aka Someone In Al Ain) 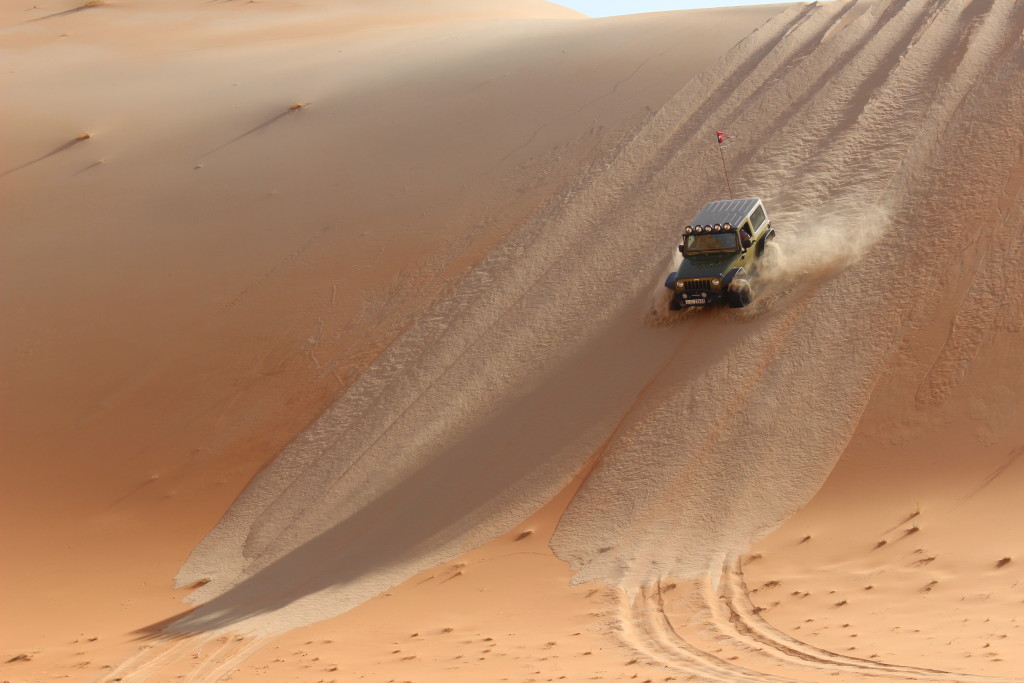 July: expect blistering hot temperatures, extremely soft sand and lots of wildlife – there’s hardly any other cars to disturb them!

In 2014 the Zodiac was completed;- 6 cars with very experienced drivers, one very early morning and 60kms of sand.  We witnessed the sunrise from the edge of the desert whilst deflating our tyres and eating breakfast, ready to make the most of the early morning coolness.  We were using another of Mike’s routes, this time the first part of the “Go West” route which took us over spectacular dunes where on occasion gazelle were gazing down on us as we traversed the valleys.  Our first major stop was at a Solar Powered Oasis; from here we deviated from Mike’s route taking one of mine to reach the Arada-Ghayathi highway.  The mercury had hit 45C by this point and when finished we dashed back to the gorgeous Tilal Liwa Hotel to cool off in their pool! (above pic by Olivia Flavin) 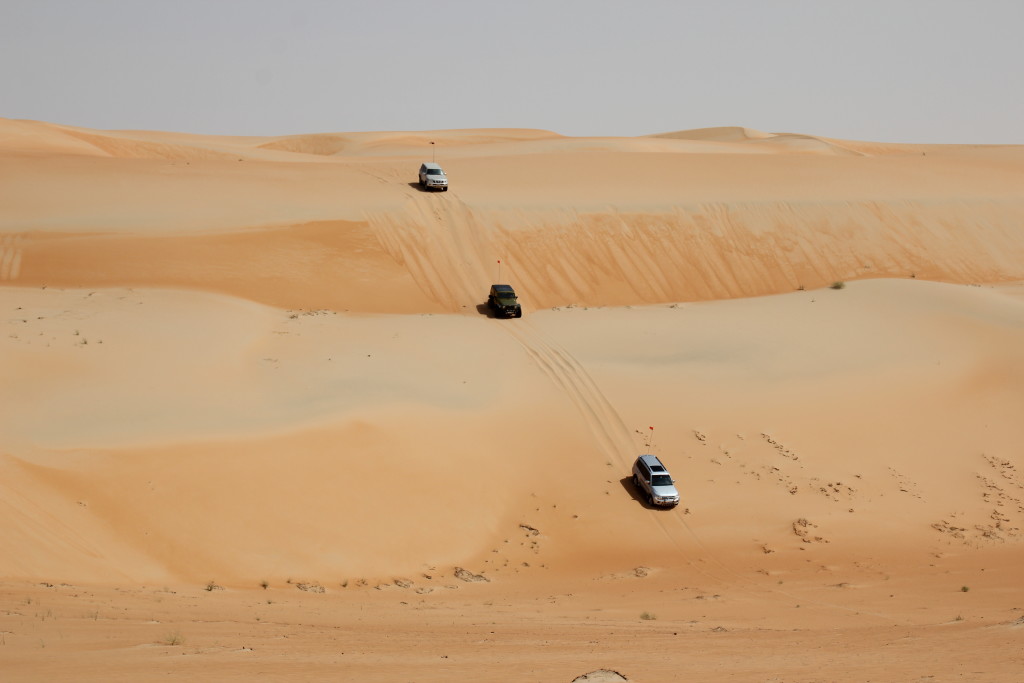 August: Expect extremely high temps of up to 50C, mega soft sand – and absolutely no other vehicles

Regular readers may remember our “Diggers, Daubs and Dunes” trip of last year (OutdoorUAE Oct 13) when we drove on wet sand for most of the morning which was unexpected for August!    However our biggest Liwa summer expedition was in 2012 when we had four separate morning drives during Ramadan with just two cars.  Local friends urged caution; “you’ll die,” some said, but with a lot of planning and some non-fasting friends on standby to mount a rescue effort should we need it, we came through unscathed. 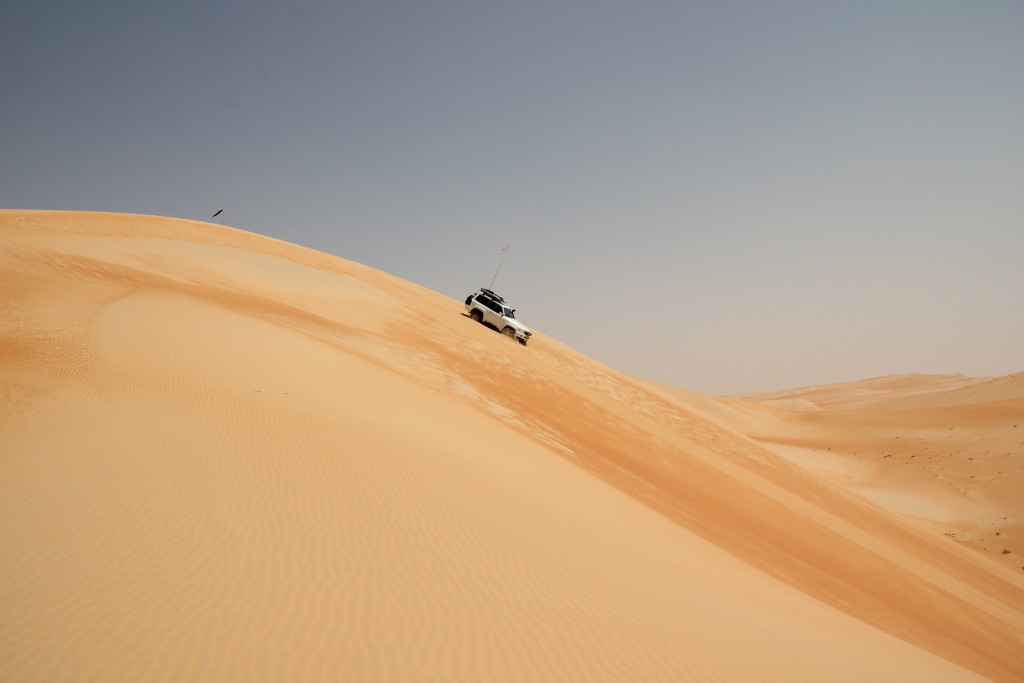 Our one foray into the Liwa area during the month of September happened last year and ended up being billed retrospectively as the “Blood, Sweat and Tears Trip”.   Many things conspired against us – early morning fog delayed our departure from Liwa City, the sand which had been wet only three weeks earlier was now dry and supersoft, we had multiple stucks in a technical area.  Originally planned as a six hour desert outing, but it wasn’t until 10pm that the five exhausted drivers and passengers crawled into the Liwa Hotel!  However we were never in any real danger as we had adequate water, food and shelter should we have been forced to spend a night on the sand – but it led to the creation of our “Offroad Arabic-English Phrasebook” which you can find in the December (?) 13 issue. 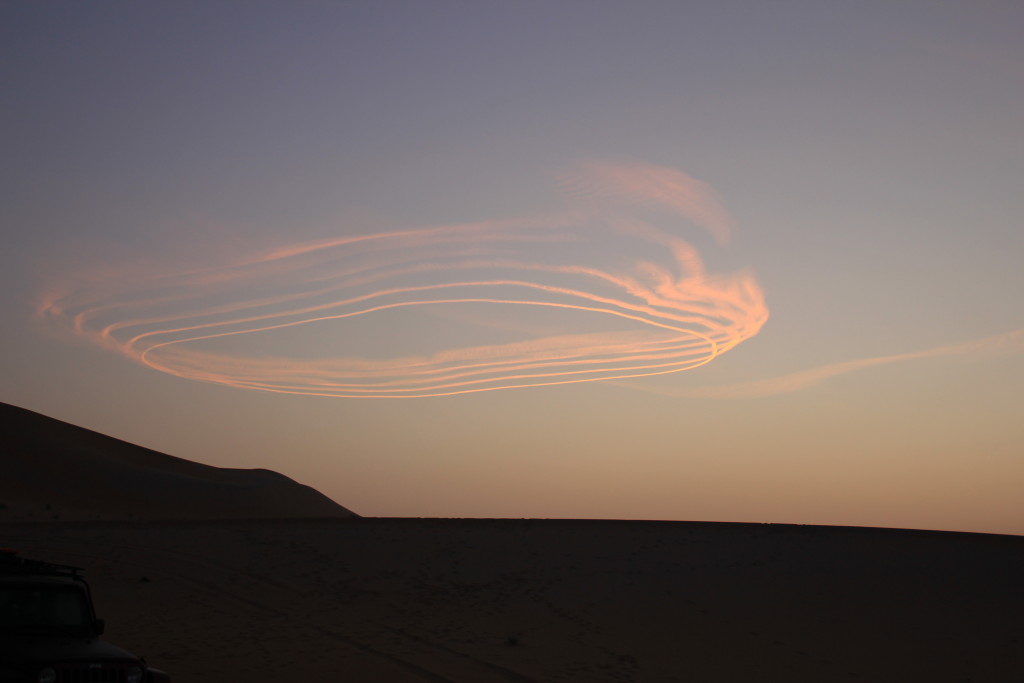 October: Expect warm nights and soft sand, and at the end of the month early morning fog

My first ever adventure into Liwa was in 2010; thus beginning my obsession with the area – I’ve visited every October since.   After a summer cooped up in our villas and apartments or driving close to our cities you want to kick your heels and where better to do it than the largest sand dune desert in the world!  The most memorable part of our trip last year wasn’t the sand, or nature, but man-made vapour trail circles which were visible from our campsite in the early hours of daylight. There was much speculation to the cause but one of our friends, ex-American Airforce pilot tells us that chances are a military jet refuelled in mid-air about 35,000 feet above us. 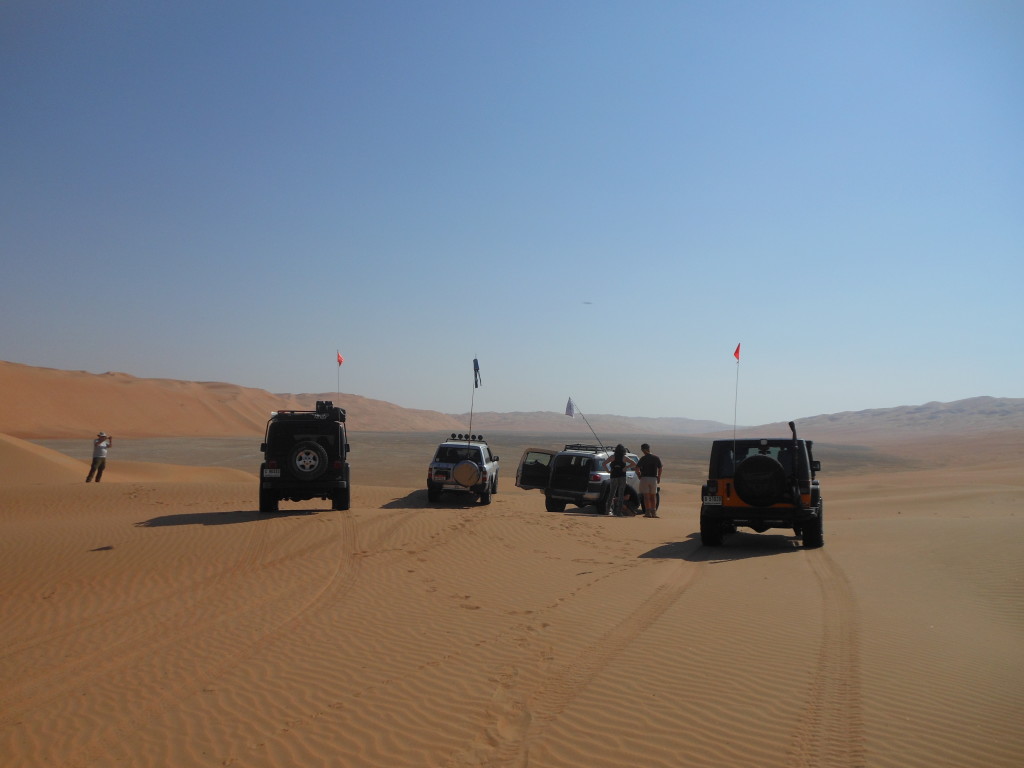 In 2012 we had one of our most memorable Liwa expeditions when we tackled Mike Nott’s “Liwa Crossing” route, from his “Adventure Routes: UAE&Oman” (insert advert on page?); we even picked up two other cars enroute.  We covered his 140km route in 8 hours with a few interesting challenges along the way. (above photo by Stephen Dersley) 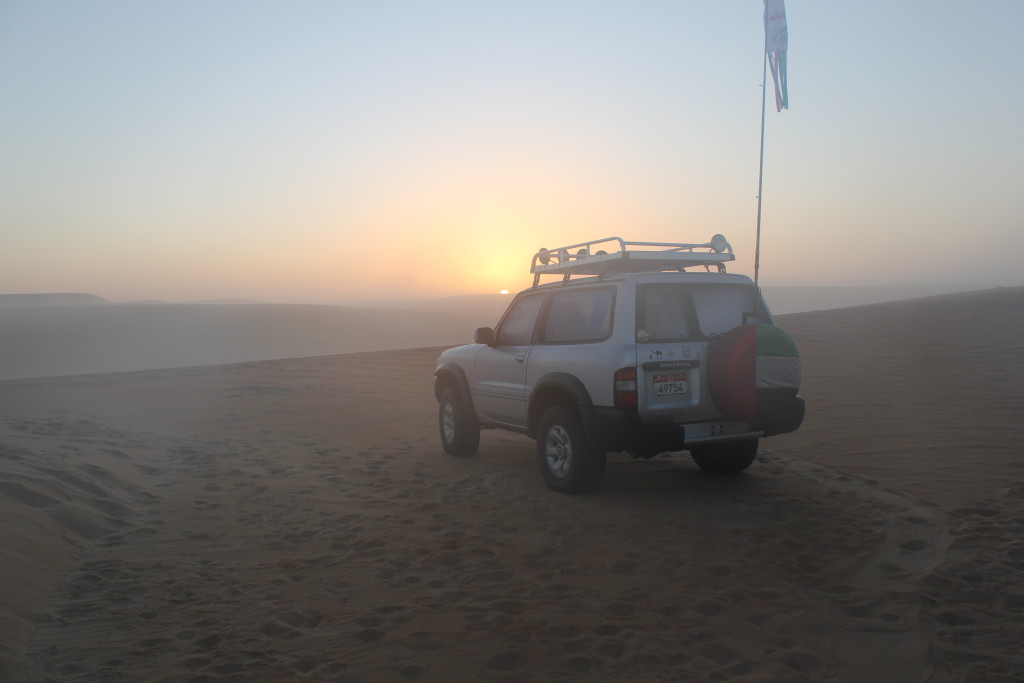 We have driven in the Liwa area a number of times in December, we’ve even spent Hogmanay (31st December) camping in the red sands.  What sticks in the memory most is the 6C temperature we experienced in 2011, when we camped south of Madinat Zayed to visit the Al Dhafra Camel Festival.  This festival which celebrates the ship of the desert and Emirati/Bedu traditions in general is held in late December and is a great excuse to visit Liwa for some driving/camping and culture.

May 14, 2017
Marina Bruce
Comments Off on Liwa – Zodiac Style
Liwa   Offroad
liwa   offroad   offroading   zodiac liwa
can i buy reglan over the counter.