Next month will see the 5th anniversary of the day I was introduced to the famous old abandoned Oshkosh water truck!  It has been lying deteriorating in the desert for the best part of 20 years and you will see from the photos how it has fared under the desert sun since 2012.

I could hardly believe my eyes when it came into sight!  I was on a driving job and this was one of the first waypoints! 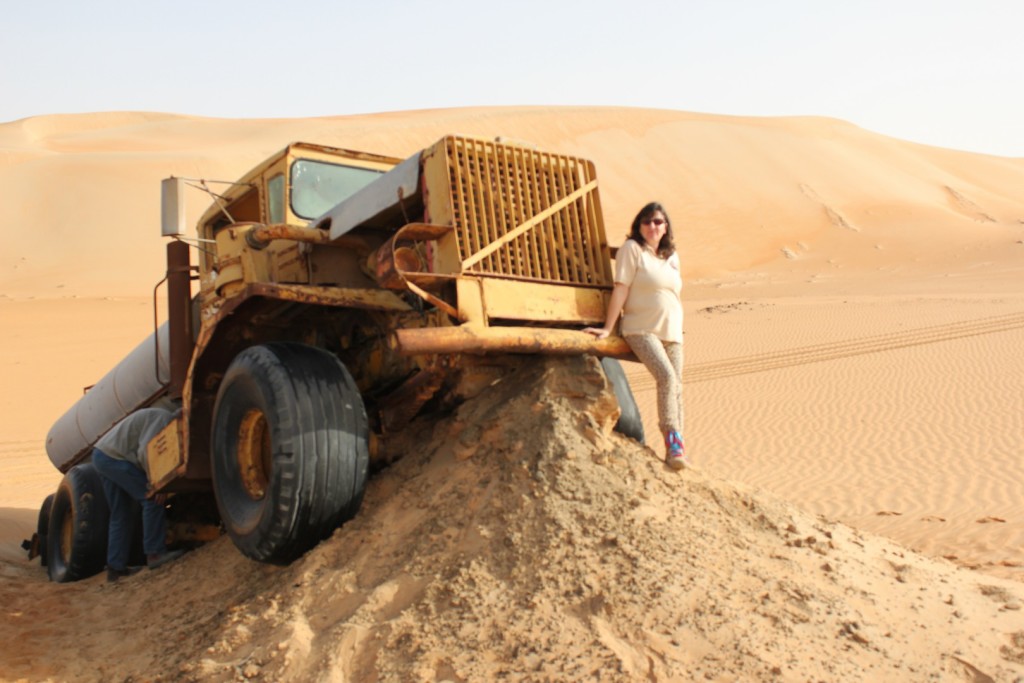 We returned with a mechanic but apparently it is a lost cause!  We also opened up the space on the side for corporate advertising!  Pics taken by Jane Koester and Klaus Strickmann. 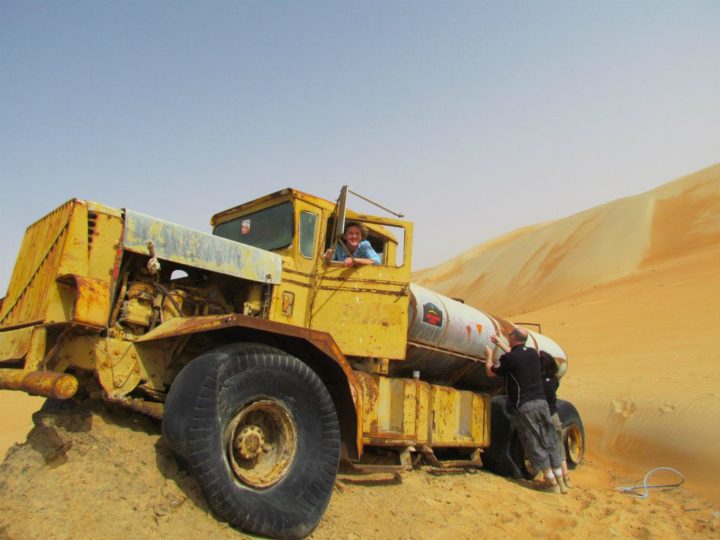 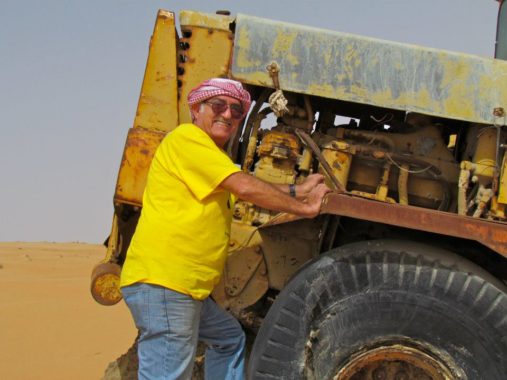 I decided that posing next to the tanker for a photo was “so last year” and decided that future shots would see me atop it!  This picture was taken at 7am during Ramadan, on a series of two-car drives which were our summer holiday. 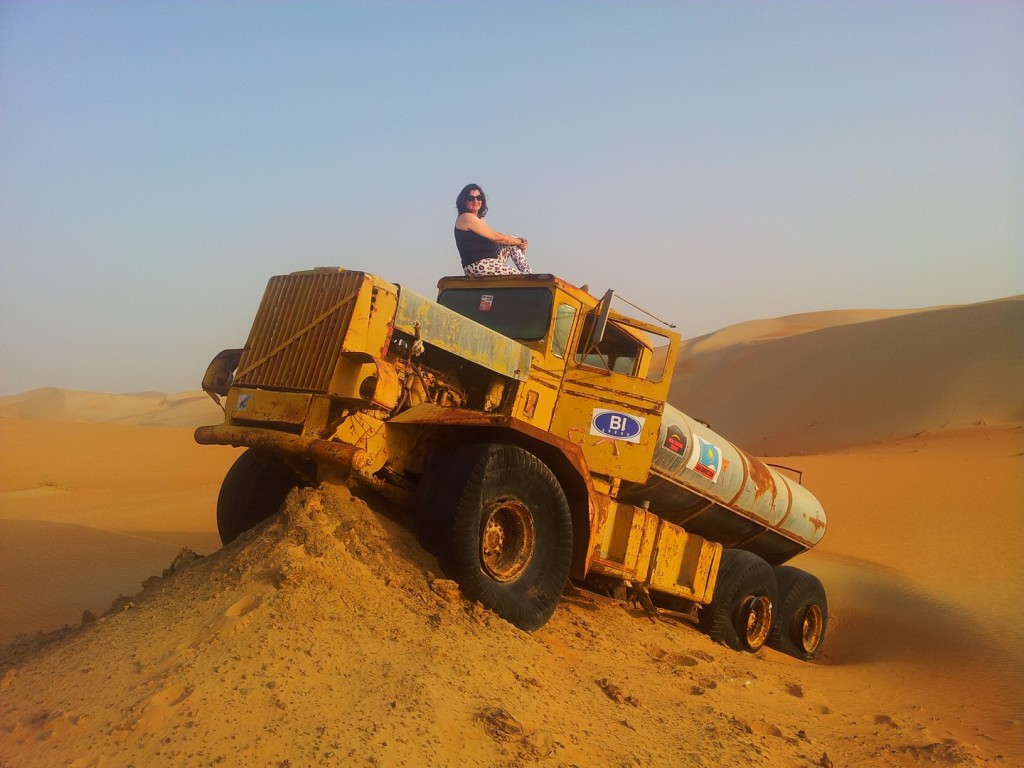 I couldn’t keep away from it – I organised the Virgins & Veterans trip to introduce my friend Mike aka Duckmeister to Liwa and of course I had to include the tanker. 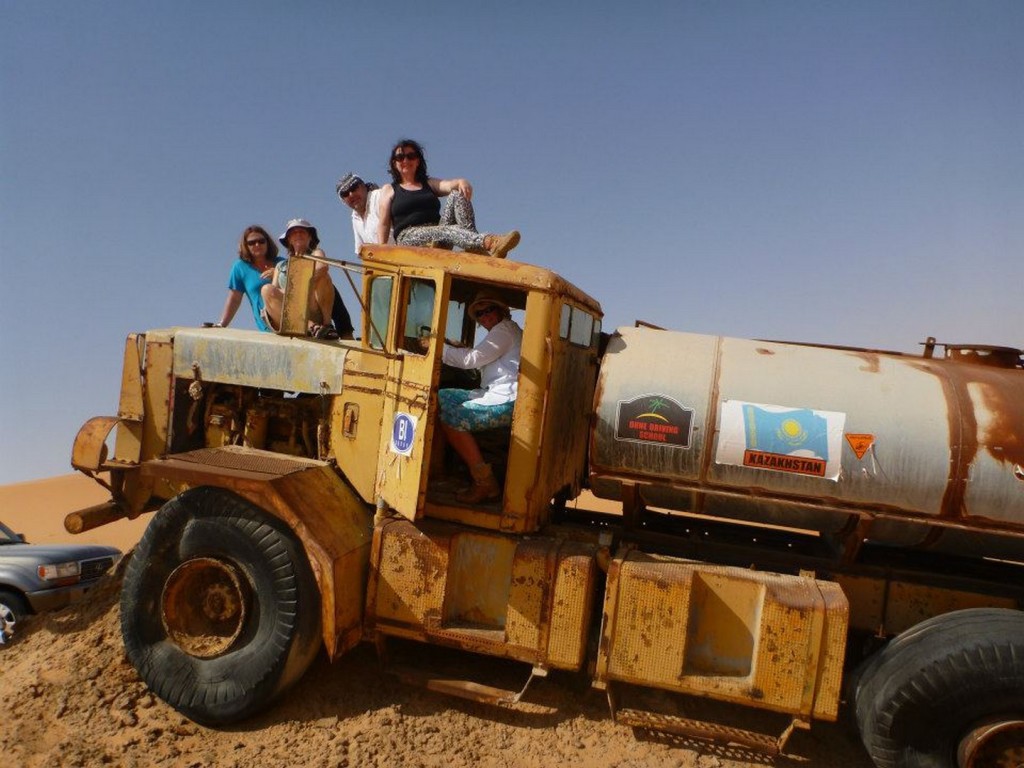 I left it alone for four months until once more on a driving job we stopped by and I took the opportunity to add a Scotland sticker. 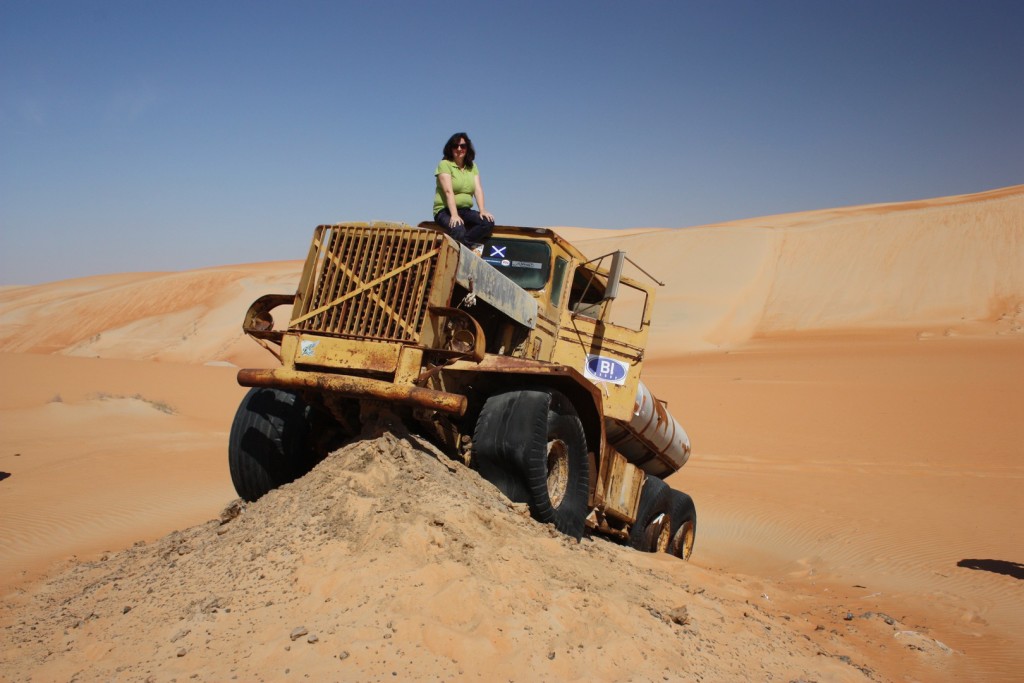 It makes a perfect backdrop for a picnic! 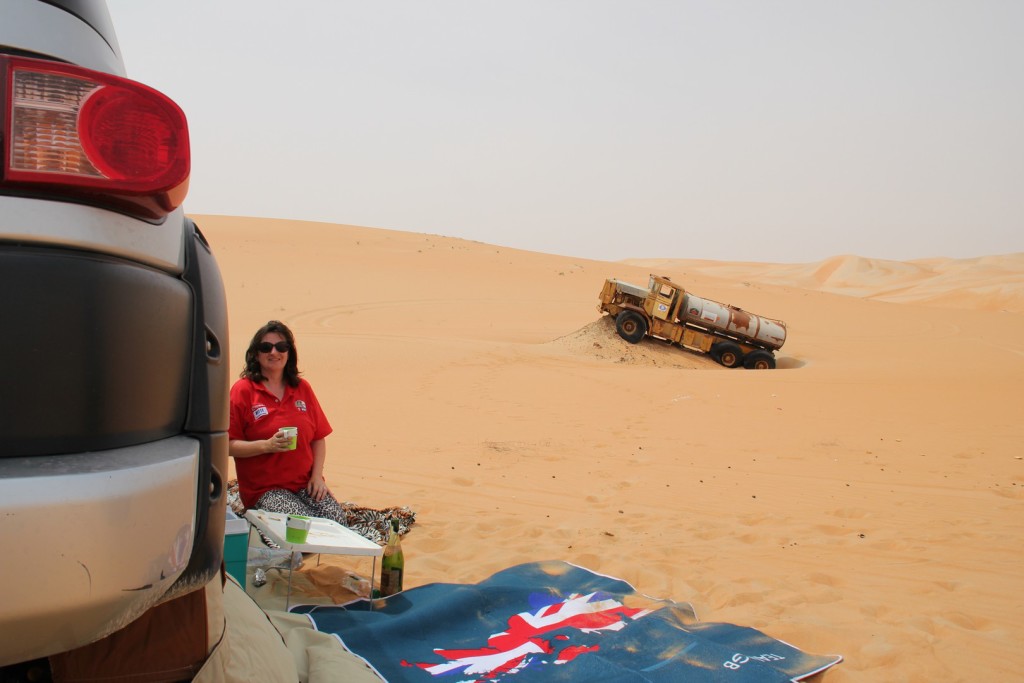 I took a group from Oasis Offroad out to visit as part of our Desert Rose trip. 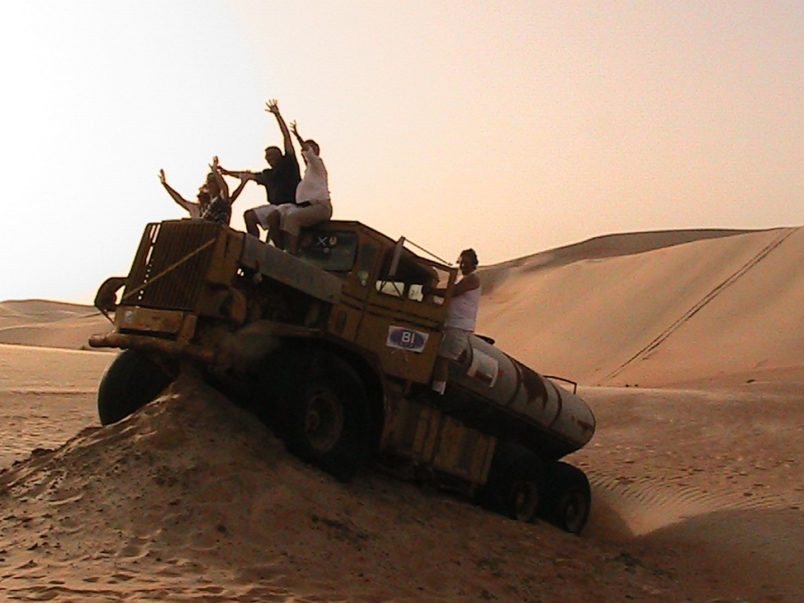 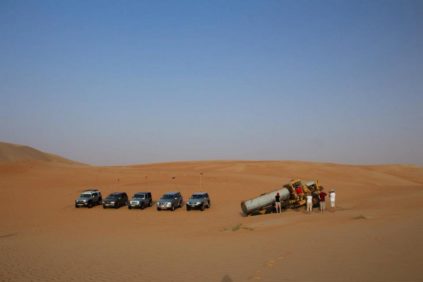 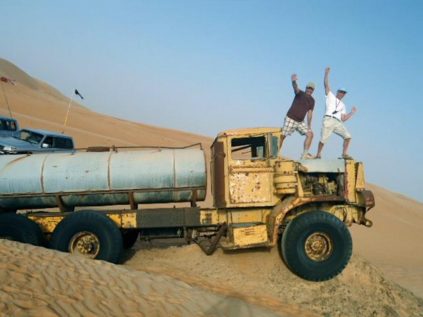 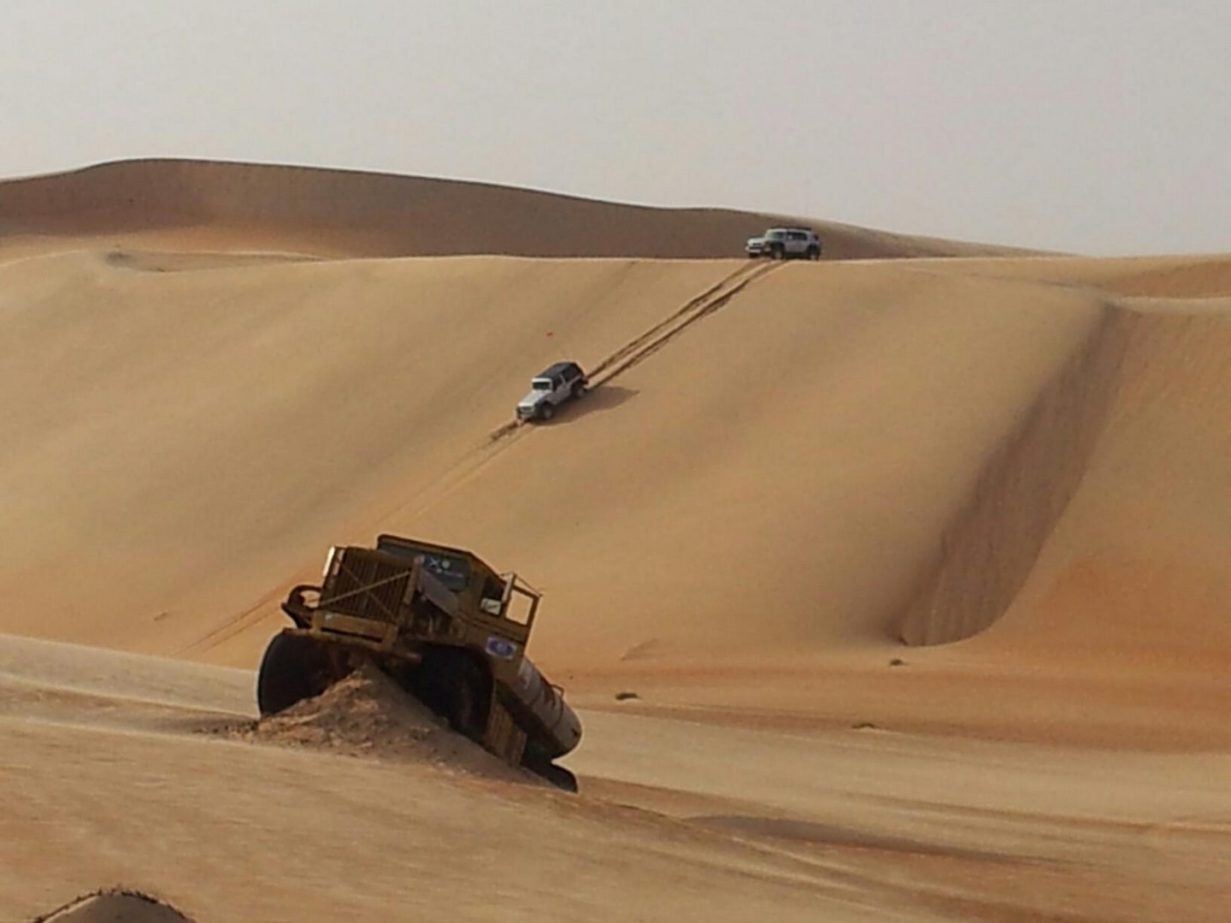 On the last day of the month we braved 42C temps to drive from MZ to Ghayathi, pausing for a picture. Photo by Amer, aka “Someone In Al Ain”. 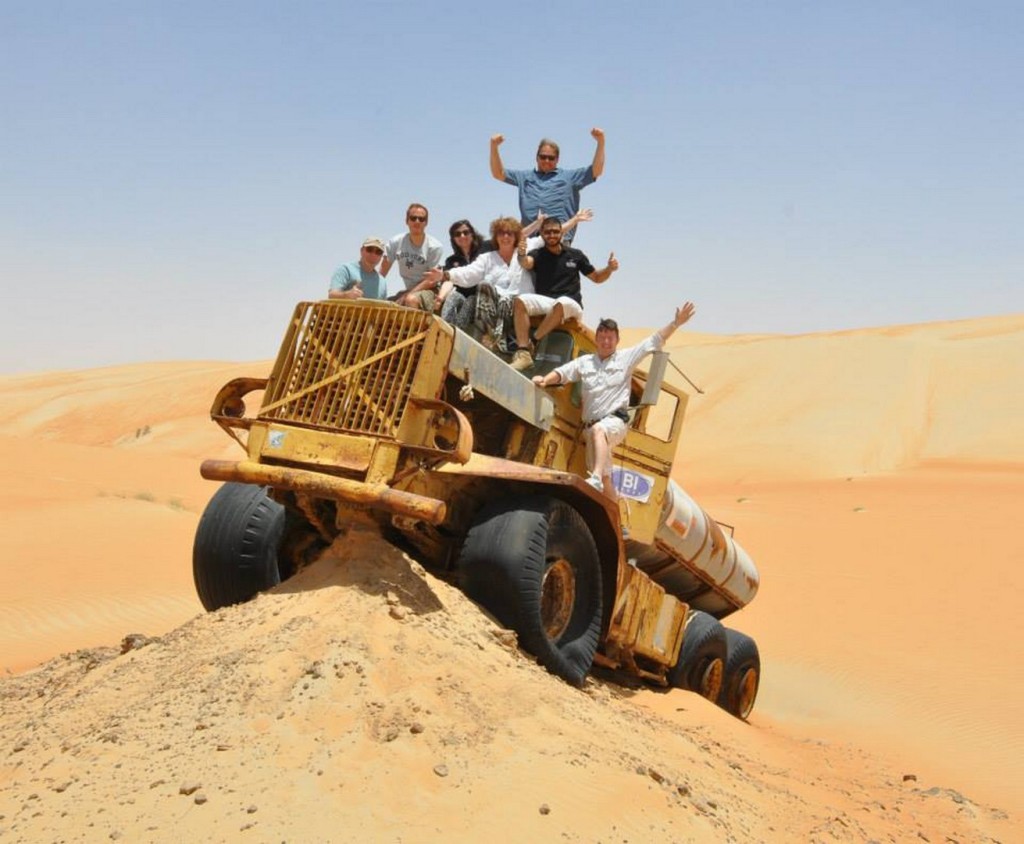 We passed by on the Blood, Sweat and Tears trip when I tried, and failed, to prove a moderate route between the fodder farm and the fish farm 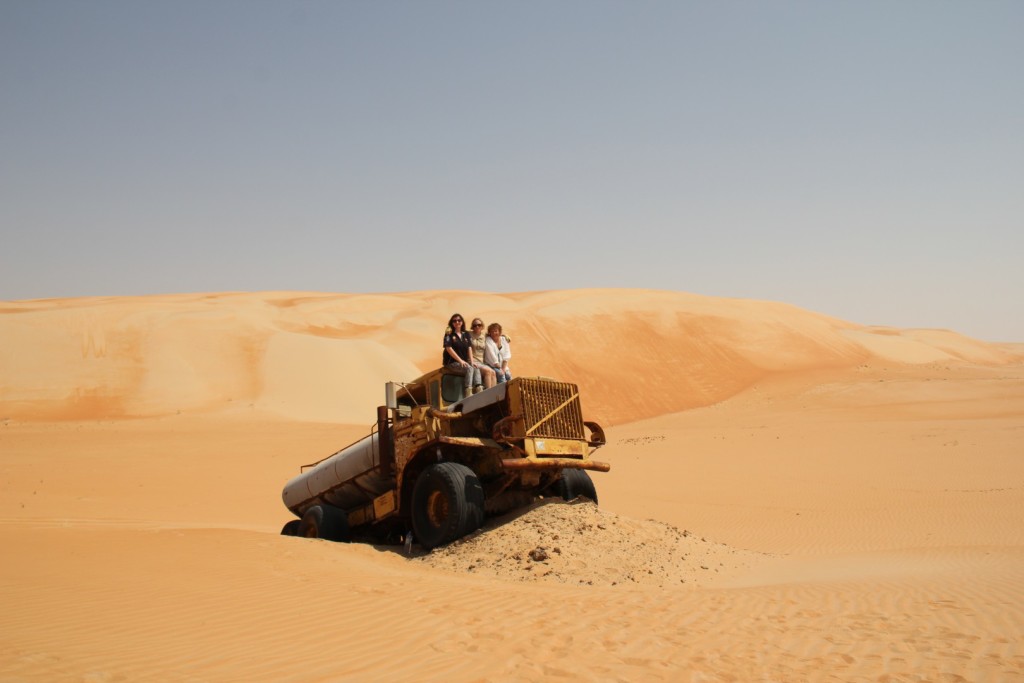 I left it alone for a long while then, in fact I suspect I was not near it until I organised a New Year’s Day Oasis Offroad trip in the area. Photo by Donna Reynolds. 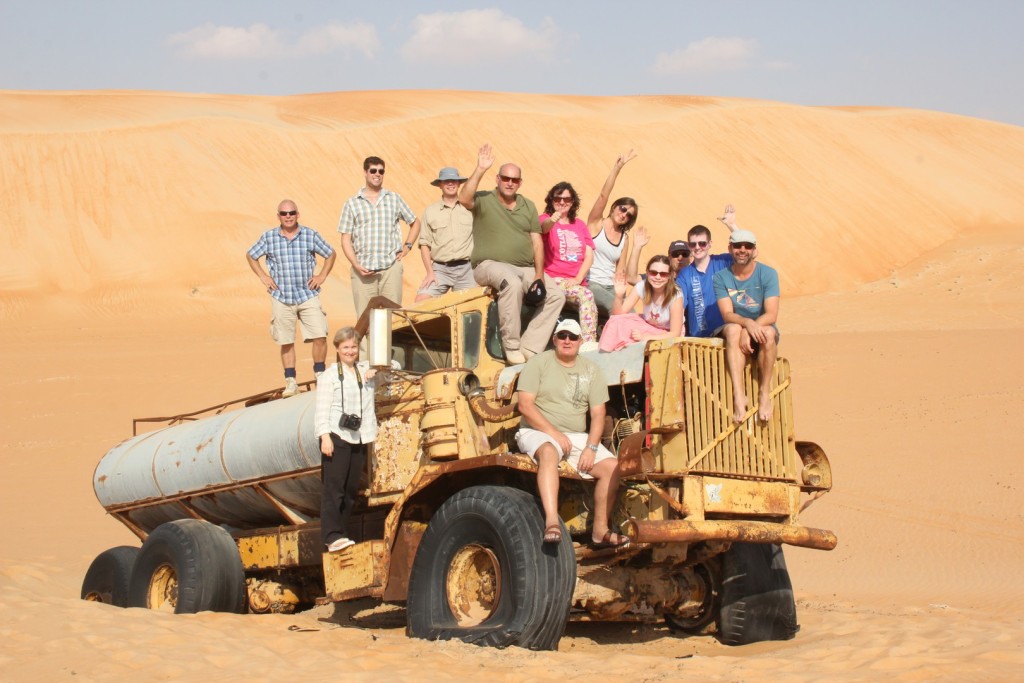 The following month I was back, on the driving job.  Photo by Chris Lidster 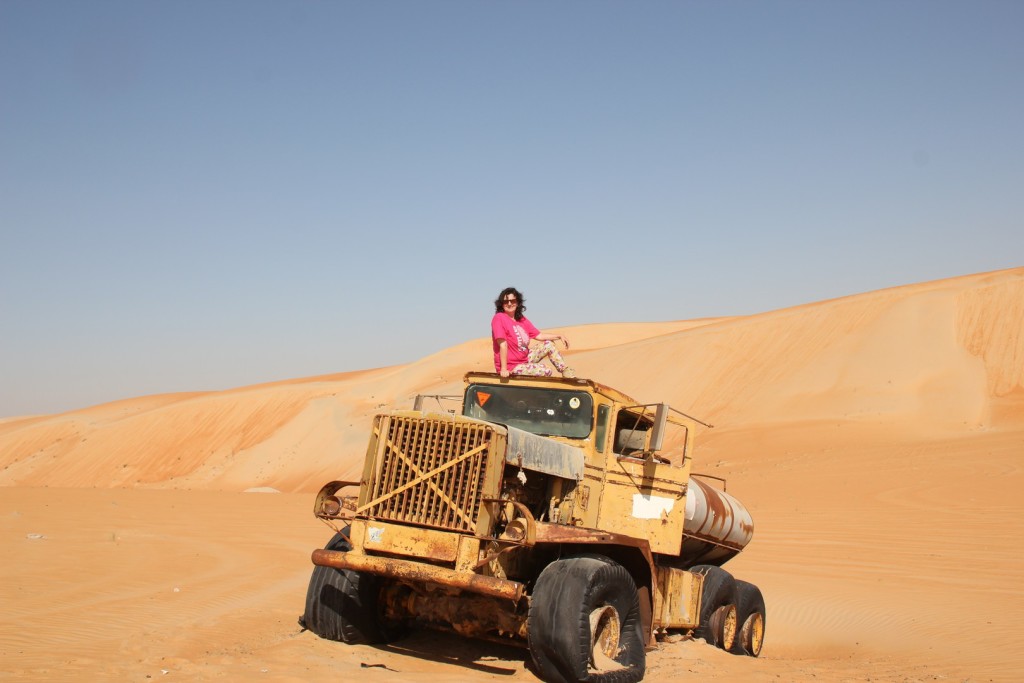 I wonder how many friends I have dragged out here?  Yet another Oasis Offroad trip 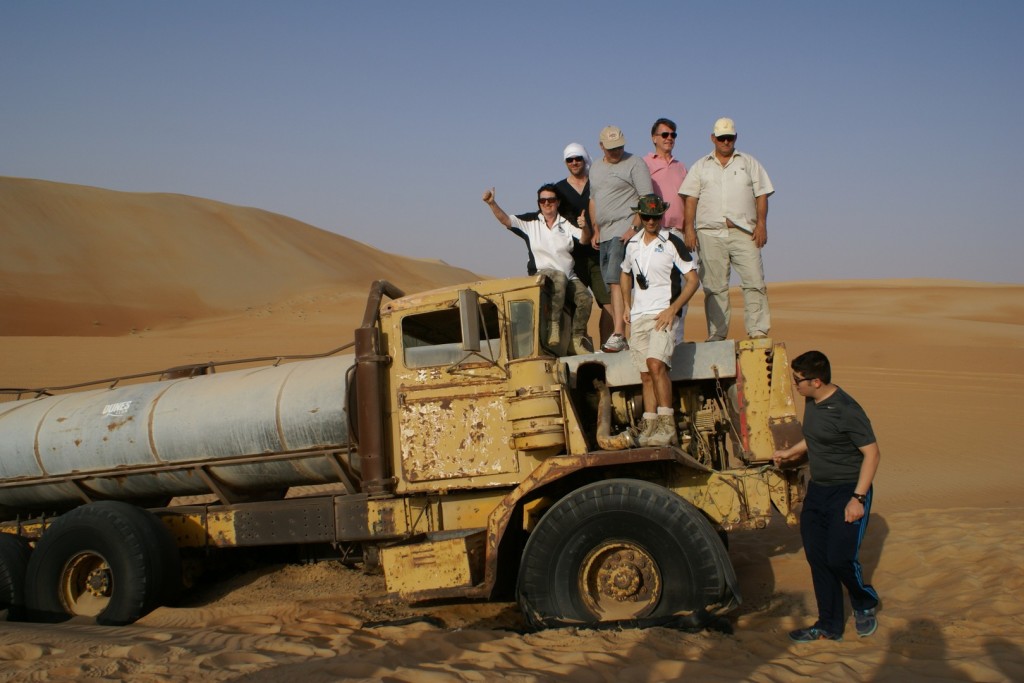 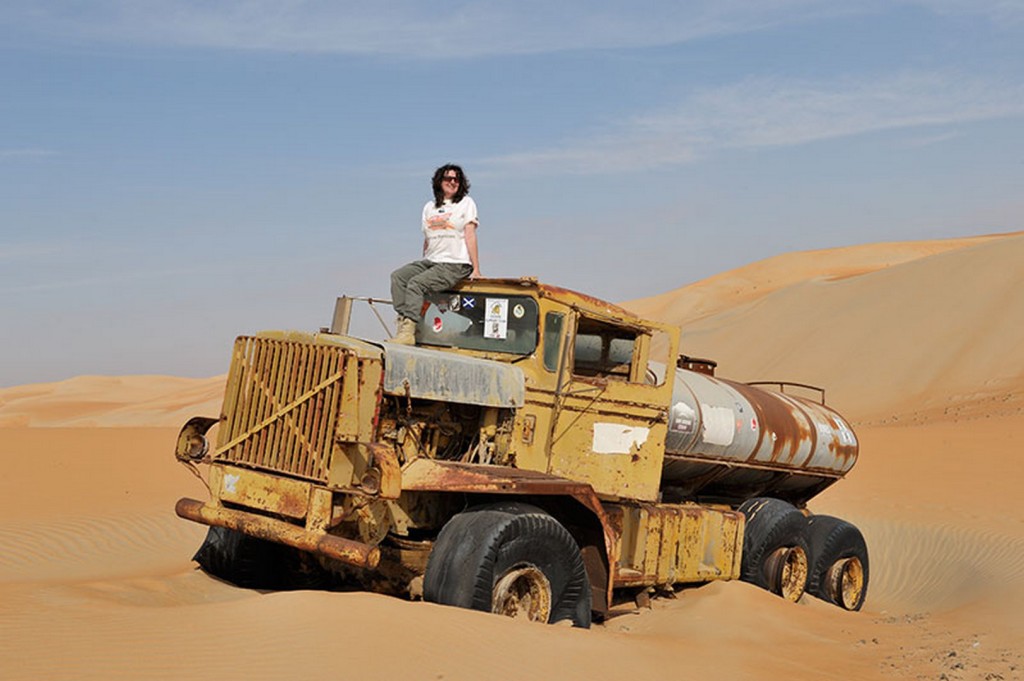 March 2016 – it was my great pleasure to introduce a fellow desert enthusiast, Pavel of Moto Desert Rides to the Oshkosh. 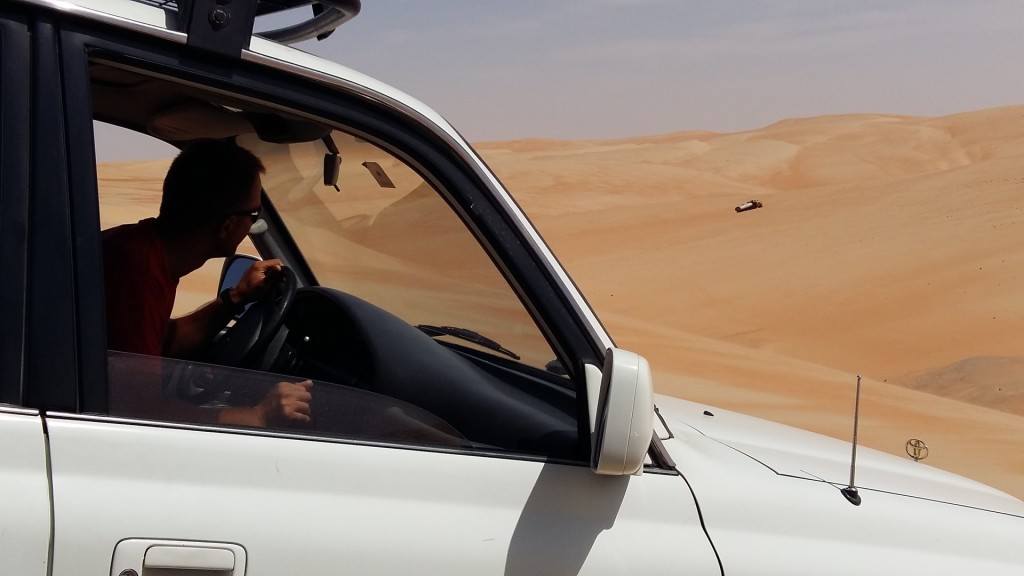 Possibly the first time Rahhal had visited it! 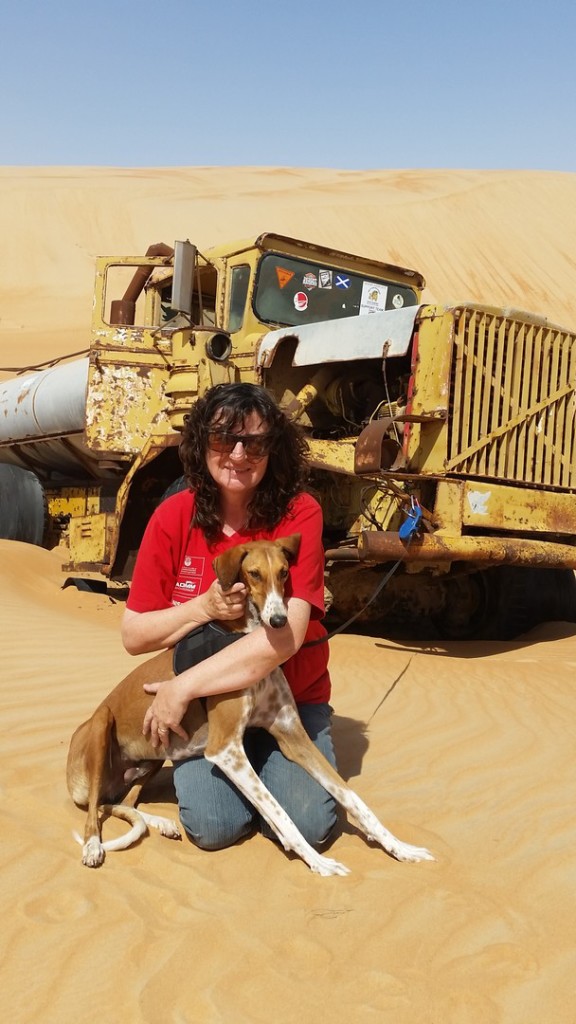 It stood there, all alone and neglected for 9 months, until I included it in my National Day Weekend tag-a-long tour. Photo by Dan Wantanabe. 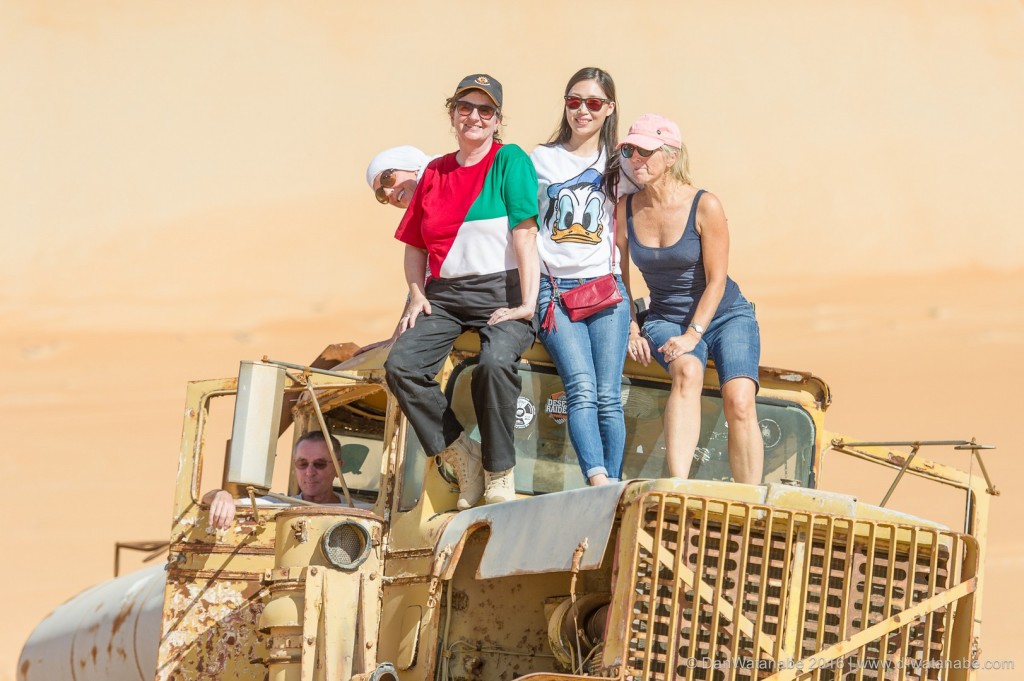 Having found a relatively easy, yet indirect way to the tanker I could not resist a return visit on another tag-a-long tour just a week before Christmas. Photo by Jay 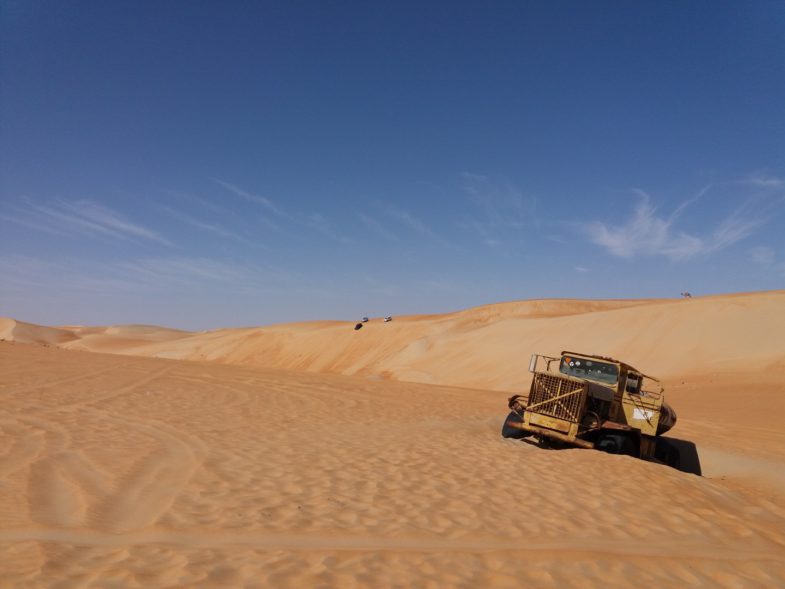 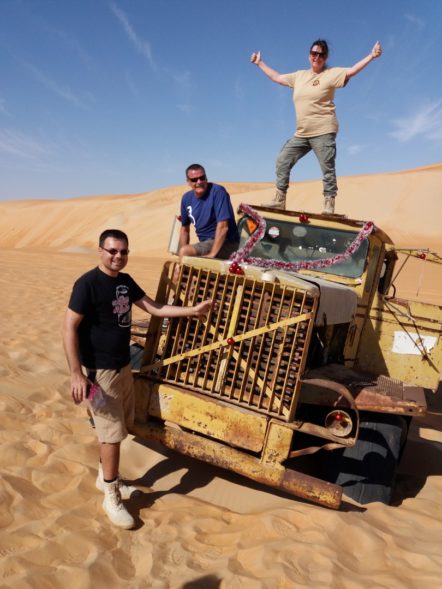 On Christmas Eve 2016 my hubby and I took our cars and dashed out to the tanker, just in time for sunset.  Having been inspired by the Coca Cola Holiday Truck adverts, we thought we would do our own holiday truck, desert style.  Packing some led lights, power inverter and camping gear and of course our hounds, we made camp overnight so we could wake up in the desert on Christmas Day.

As soon as we arrived our dogs had a feast on someone else’s leftover biriyani – and I picked up one full  black bag of rubbish!  Please desert drivers, clean up after your picnics and BBQs!

I  would definitely camp near there again but a little further away from the tanker – even small gusts of wind make the it creak and howl in a ghostly way. 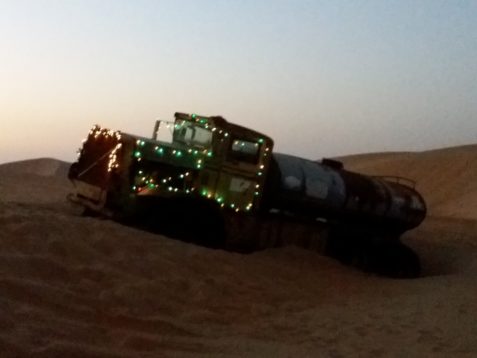 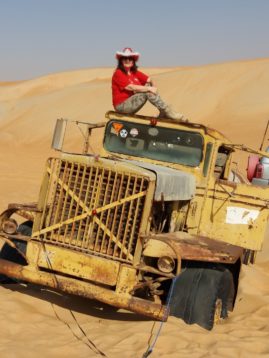 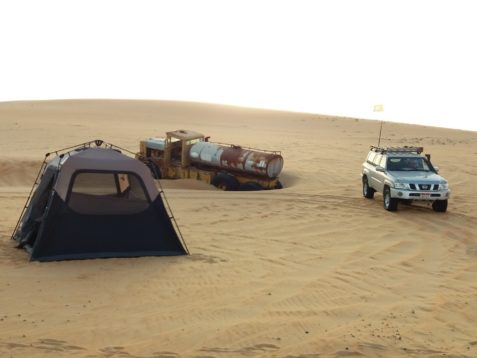 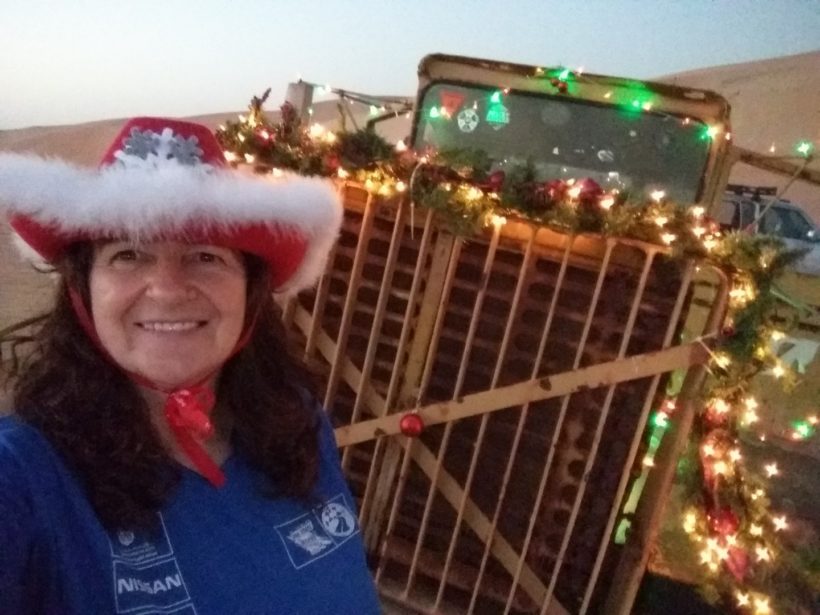 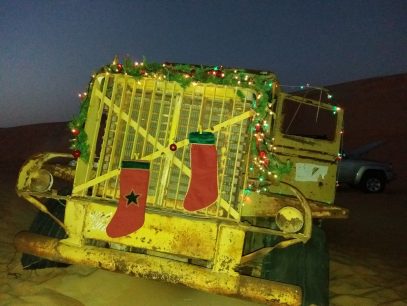 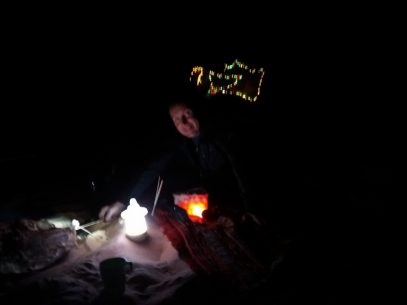 So there we have it -you will no doubt have noticed that the oily sand underneath has blown away and the old Oshkosh is now lying flatter than it used to; the metalwork is rusting and a dune has started to build on the west side.  How long will it be until it falls apart?  Will it ever be totally engulfed by sand?  Only time will tell.